On the Feast of St. Peter and St. Paul

I went to Mass this morning with my younger two daughters, and after Mass I was talking with our pastor and telling him how much our recent trip has changed the way that I think of St. Peter and St. Paul (and all the saints and the whole Church in general, but that's several articles and blog posts worth of reflections). Earlier this month, our youngest daughter and I had the chance to tag along with my husband on a work trip around Italy, visiting archaeological sites related to the early Church. Many of the sites we visited were in Rome/Vatican City.

After visiting the sites where Peter and Paul walked and preached the Gospel, they are more real to me than ever before.

Before I go any further, disclaimer...I am not an expert on Petrine and Pauline sites in Italy, but I have friends who are smarter than I am. Just about everything I'm sharing here, I learned from them.

One of the perks of being married to a seminary professor means that there are always friends in Rome! So, special thanks to our friends Fr. Seiler (who is studying to be an apostolic nuncio...pray for him!) and Fr. Auer (who is a new, baby priest...pray for him!) who said Mass for us and showed us around St. Peter's. 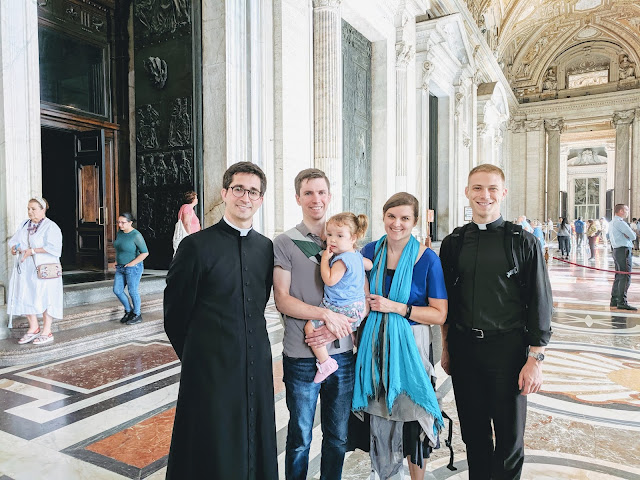 And a special thanks to our friend Paul (who is studying to be a priest for the Archdiocese of Omaha...pray for him!) who showed us around a million churches, including St. Paul Outside the Walls. 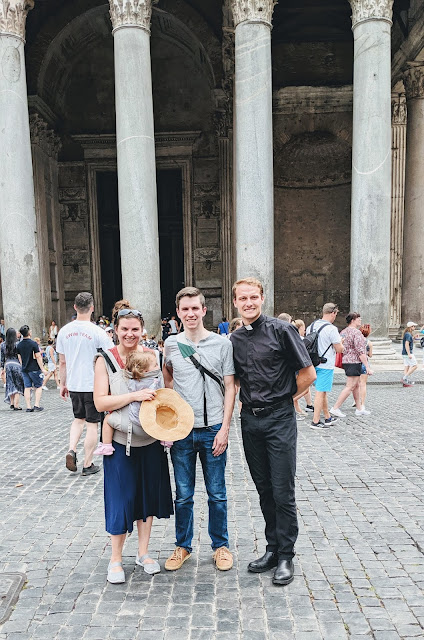 I have always loved St. Peter because he is so humble and he always seems to be either saying the most perfect thing or the most awkward thing. I love, love how many times Peter says something completely awkward or messes up, but keeps coming back to Jesus. I love that he is so weak, so imperfect, and yet chosen by Christ to be the first leader of the Church on earth.

When you stand in St. Peter's square, it feels surreal. How many times have you seen this view on TV or on the internet? 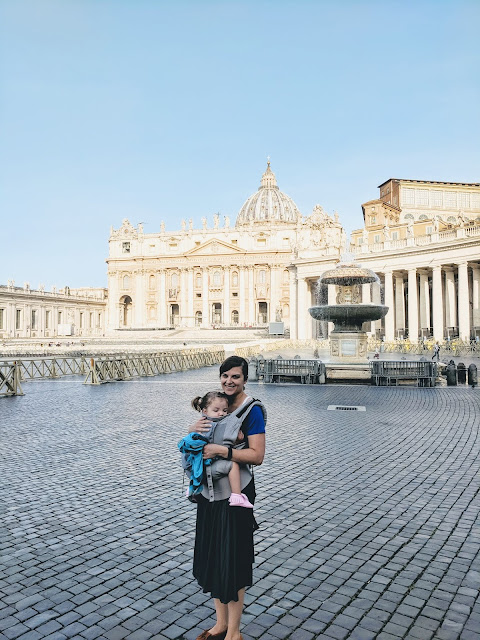 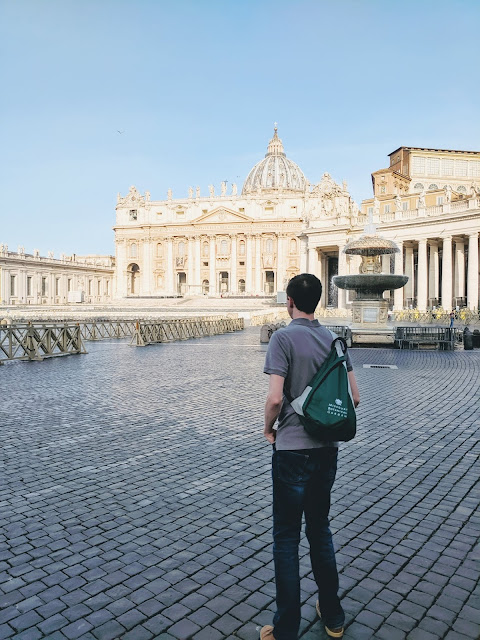 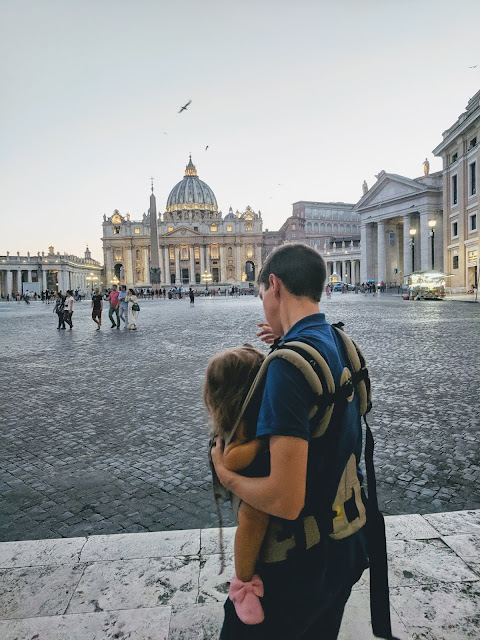 But back in the day, this square wasn't a beautiful, peaceful place that pointed people to heaven. It was outside of the city walls of Rome, across the Tiber River. It was where you took people to be buried or executed. It was a cemetery. In the very center of the square is an obelisk. It is stark and made of concrete, and although it has been moved slightly (it's original location is by one of the gates that leads into Vatican City proper) it is the exact same obelisk that would have been in Peter's line of sight when he was being crucified. Tradition holds that this very obelisk may have been the very last thing that Peter saw, when he was giving up his life for Christ. 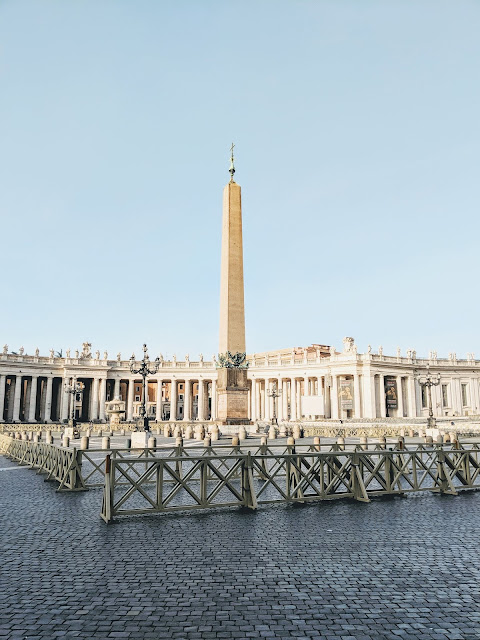 The inside of St. Peter's overwhelms the senses. Because it is in the Baroque style, great care was taken to make even the most enormous features seem smaller than they are. It was designed to make you feel as if heaven had come to earth.

But more stunning than anything else in St. Peter's is a humble grave, situated under the main altar. Still humble, still unexpected, Peter's simplicity is what makes him so remarkable. 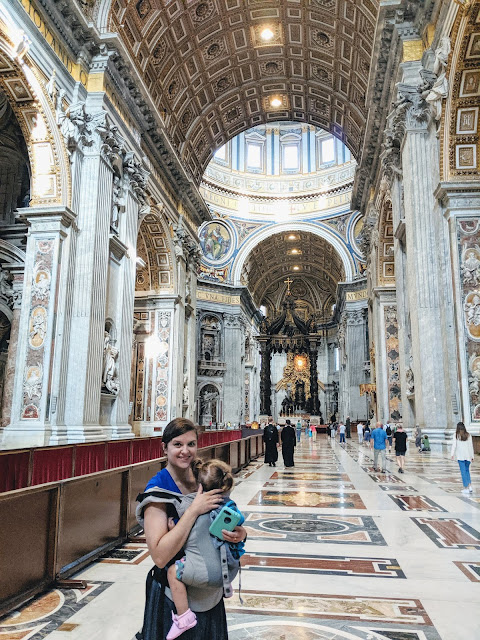 It is really hard to capture what Peter's grave looks like (you aren't allowed to take pictures down in the crypt and you can't descend the stairs that are in front of the altar). Standing there took my breath away. That altar, this church...it is the center of the Church. If you dropped a pin from the center of the dome, it would fall directly on Peter's grave. Buried here by fellow Christians after his death, they continued to mark his tomb for years. Tradition maintained the location of Peter's bones (and archaeology and DNA testing later confirmed it). It is a simple stone grave, marked with red stripe of paint.

But the Church and the church are literally built on the rock of St. Peter. 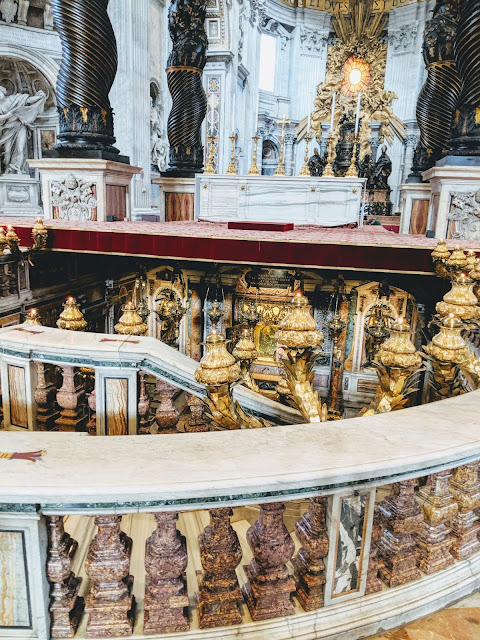 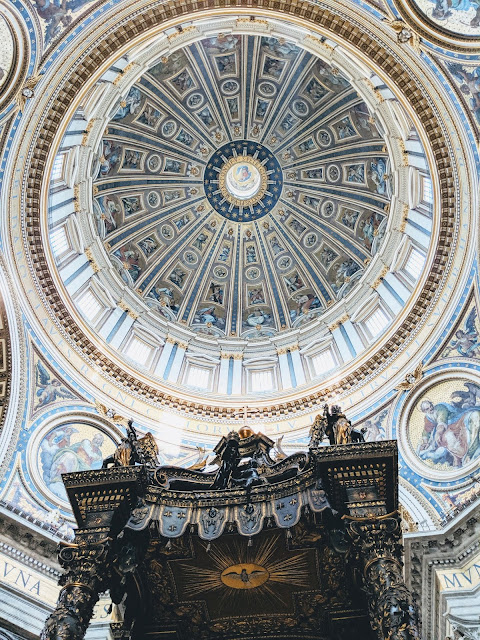 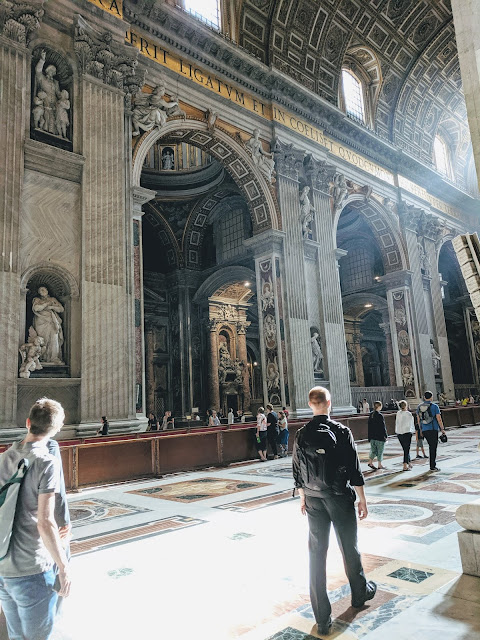 I stood there, gazing down at his grave, for the longest time. I prayed fervently for a special intention that had been placed on my heart. And I pondered that there, right before me, lay the bones of Peter. One of Jesus's best friends and closest companions, a simple fisherman from Galilee was buried right there. Never could he have imagined that his life would end violently, outside the walls of Rome. Neither could he have imagined the foundation his faith in Christ would lay for millions and billions of Christians.

Christ chose this humble, ordinary man. And looking at his grave, I realized that he was real. It was all real. 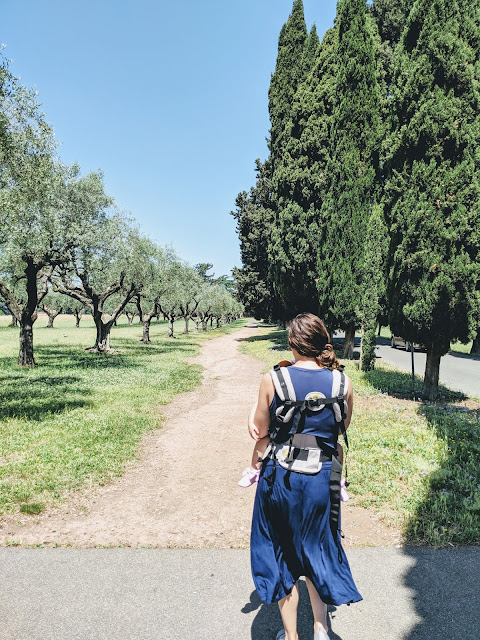 Another story of pious tradition, surrounding the life of St. Peter is the "Quo Vadis" story. In the height of the persecution of the Christians, Peter fled Rome. He was headed away from Rome, along the Appian Way. The picture above is from the path that winds along the outer grounds of the Catacombs of San Calisto (where half a million early Christians were buried). As you walk through the fields above the catacombs, you see a wall bordering the land. That wall runs along the ancient Appian Way, the road leading out of Rome. At the beginning of the road is the Church of the Quo Vadis.

At that spot, the fleeing Peter encountered Christ, headed back toward Rome. Peter asked him, "Quo vadis?" Which means, "Where are you going?" And Christ replied, "I am going to Rome, to be crucified again." Peter realized that Christ was asking him to return to Rome, to suffer for Him. 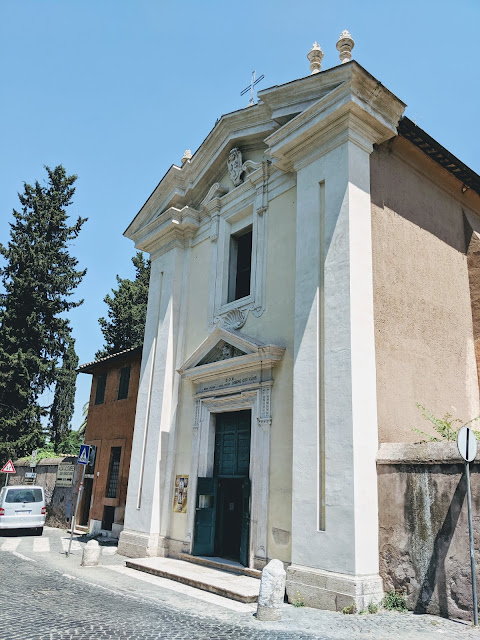 It is an ordinary road. Whether or not the story is true or legend we don't know, but Peter likely did walk on this road, and Christ may have appeared to him. This, too, was part of the story of the fisherman from Galilee. 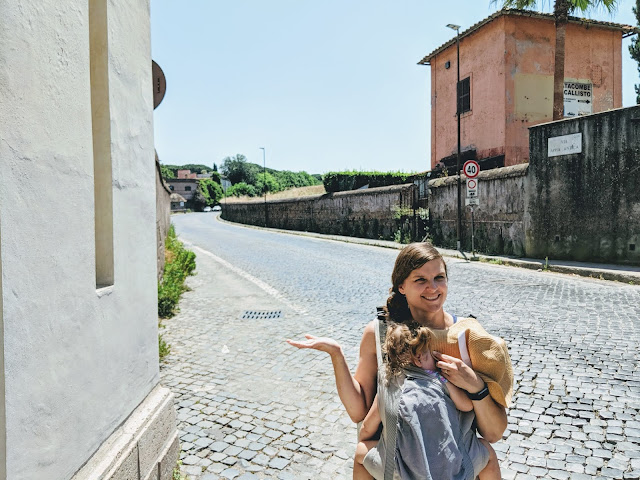 And then, there's Paul.

St. Paul's epistles are some of my favorite books in the Bible. His reflections on his weakness and need for Christ's grace (and deep awareness of how Christ worked through his weakness) have been so formative for my own faith journey. Paul, too, found himself in a place that he never imagined.

One of the last churches that we visited in Italy was St. Paul Outside the Walls. It is one of the papal basilicas. St. Paul wasn't killed on this spot, just buried here. He was beheaded in a swamp not far from here. 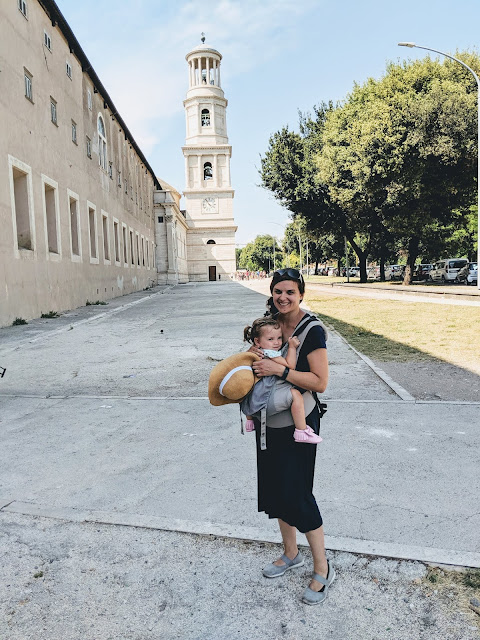 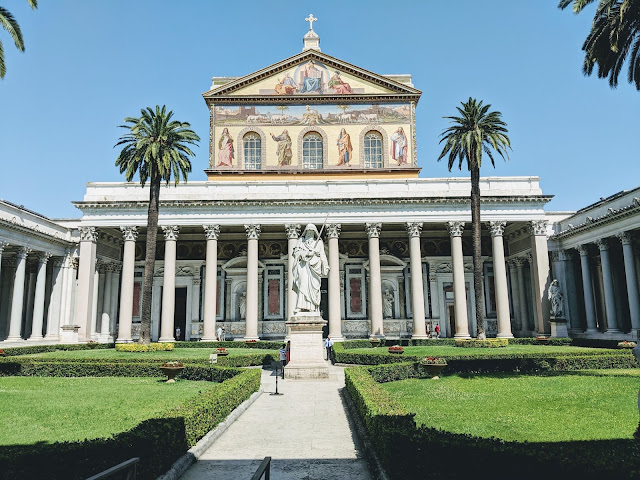 This church is an old one (it has mosaics dating back to the patristic period, which is why we were visiting it) but it is actually built on the foundations of an even older church. And, like in St. Peter's, this church was built up around the bones of a saint. Under the main altar is the grave of St. Paul. Like Peter's grave, it is a simple stone grave. 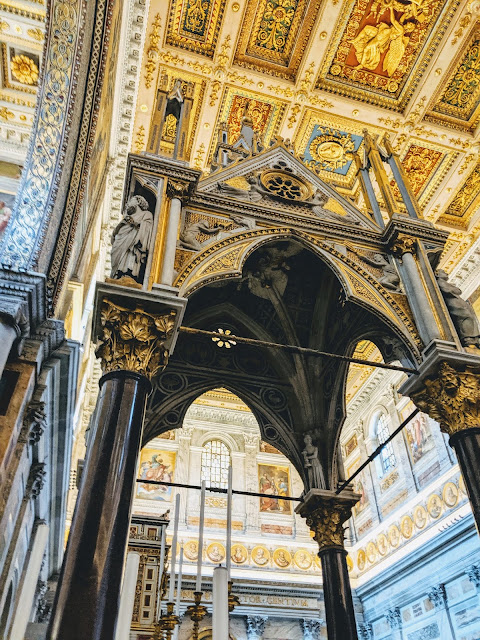 Over the altar is a triumphal arch. (This is the mosaic that dates back to the period of the early Church - fourth or fifth century, I think?) The triumphal arch was an architectural feature that was used by the Romans, but this one wasn't dedicated to a Roman Emperor. Instead, it featured Christ, surrounded by the four evangelists (the symbols for the evangelists are a common appearance in these early mosaics) and the saints and angels. And, as a reminder of what Christ has triumphed over, Paul's grave is right under this triumphal arch. Our friend Paul highlighted this fact for us, especially. "You see the triumphal arch. But what is the triumph? 'Oh, death, where is your victory? Oh, death, where is your sting??'" (He read a passage from the epistles for us as we stood gazing down at the tomb of St. Paul, and that moment sealed for me the meaning of that verse.) St. Paul's martyrdom was a victory, for Christ has conquered death. So aware of that were the early Christians, that they placed a symbol of triumph over the bones of Paul. 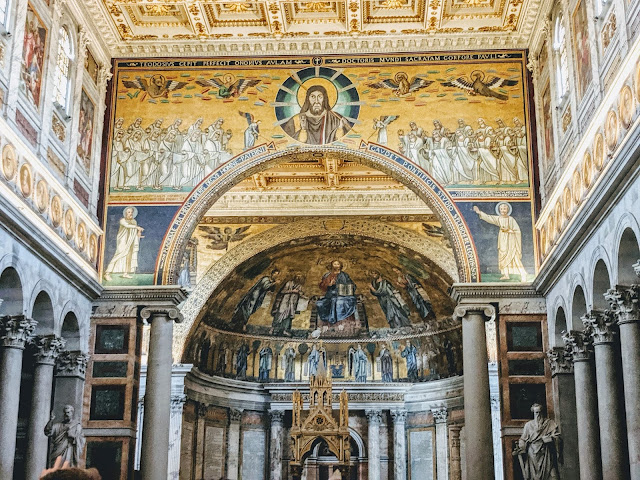 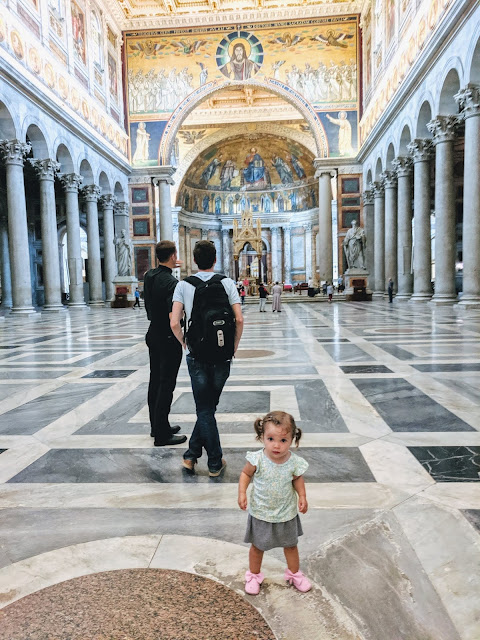 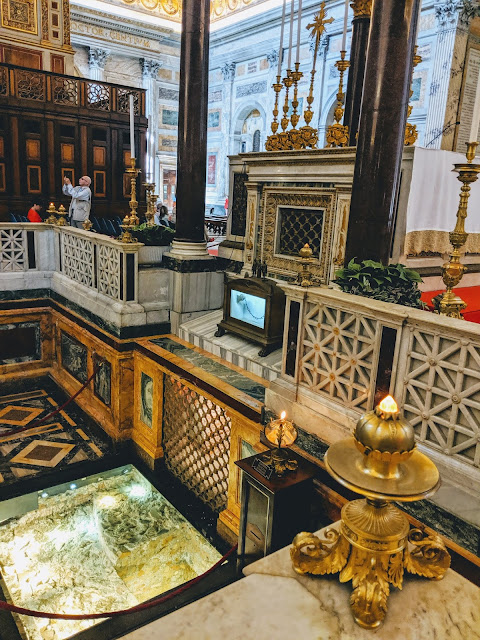 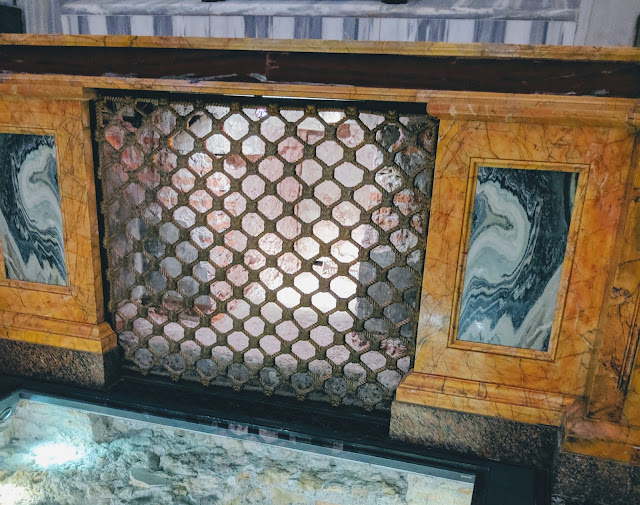 (If you look through the grillwork, beyond the brick, you can see the white stone of St. Paul's grave.)

Lost in the sacrifices and sufferings of daily life, it is so easy to look at the lives of the saints and forget that they are real. But they are. They're real. It's all real.

They aren't just stories. They aren't imaginary people. It isn't just a nice story, meant to make us feel good. The faith is everything. It is worth dying for. It is worth living for. And the sacrifices and sufferings that we are invited to bear, as we follow Christ - they are worth it. It is all worth it. 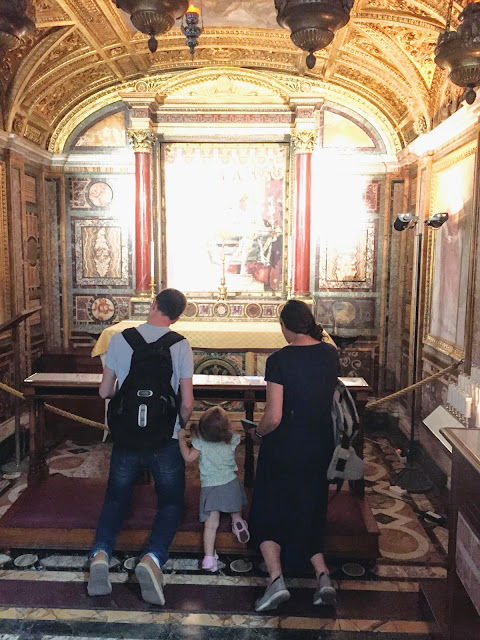