This past weekend, our family finished off ordination season by going to the ordination of our dear friend, Fr. Taylor Leffler, in Omaha. 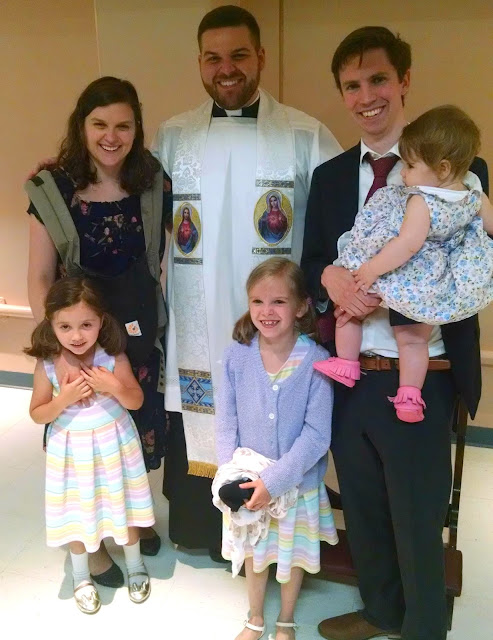 Taylor was the very first seminarian we befriended, when Andrew first started teaching at the seminary (four years ago!). He was a newly minted "theologian" (the term for the guys in seminary who are studying graduate theology and are in the four years leading up to ordination). His ordination was one of the most emotional I've experienced. The Mass itself (and his packed dinner reception) were incredibly beautiful. But to see this young man who we have welcomed into our hearts enter into this vocation...there are no words.

The other night I was venting to Andrew about the frustration of our predicament in NFP. On the one hand, we have faced secondary infertility multiple times, and it is not easy for us to get pregnant. On the other hand, because of the seriousness of my hyperemesis gravidarum, we have to actively and seriously work to avoid pregnancy for long periods of time...even knowing that we will probably struggle to conceive again, anyway. It's like a double whammy. We love our babies. We want more of them, so much. But being bedridden for months, hospital trips, home health...it's just not something we can lightly take on. We definitely are willing to take it on again in the future, but I need time to physically recover. I need to be healthy enough to take care of a baby. (I can't even be in physical contact with other people during my early pregnancy because their touch makes me so sick. Definitely a no go with a little baby!)

I can't begin to put into words how much I love all four of my children. Even on the days when motherhood is really hard, I am so, so grateful for them. I can't believe that we have four children, especially knowing that we went into marriage not knowing if we would be able to conceive (and having a difficult time conceiving initially). But here they are, and they are so beautiful. Therese, Maria, Gabriel, and Zelie. I can't believe four little ones have lived in my womb.

I don't want to sound ungrateful, but I wish I could have more. I wish I could be one of those people who is able to just take babies as they come. I wish that being pregnant didn't literally make me feel like I was dying. (And, in all honesty, if I wasn't living in modern times, I actually could die from hyperemesis gravidarum. HG is no joke.) Sometimes, I don't understand why God has given us the cross of HG pregnancies. 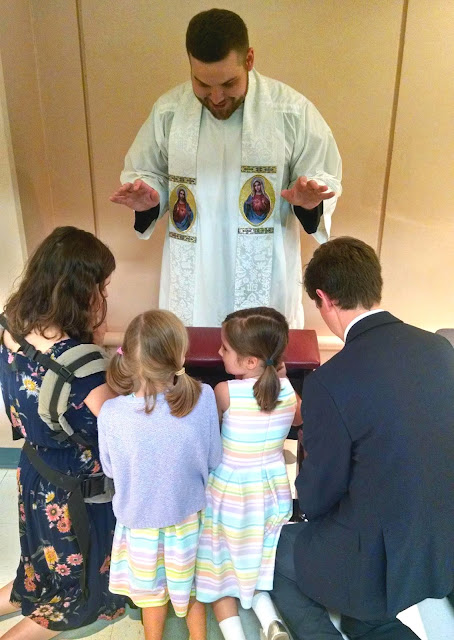 Recently, (I think it was actually when I was talking to Fr. Taylor) I remembered a story from over a decade ago. I was an undergraduate at the University of Notre Dame. I think it was before I met Andrew, and I was in the midst of trying to discern where God was calling me. I felt such a strong call to holiness, and I assumed that meant that I would have to be a nun. But I didn't feel called to religious life. I felt called to marriage. That made be feel guilty, like I was somehow taking the easy way out, or something. (Which is hilarious, in retrospect.) I remember trying to bargain with God. I remember praying in my dorm chapel, late at night, about this. I knelt before Jesus in the tabernacle and told him, "Okay, my Jesus, if you are calling me to marriage, then  how about you give me a son? And you can call him to be a priest. Please, give me a son that is a priest."

Flash forward many years and many daughters later...

When I was pregnant with Gabriel, I really thought he was my boy. Andrew was already teaching at the seminary at that time, and I imagined that the baby in my womb - possibly a son! - might one day be called to the priesthood.

Then, we lost Gabriel. He was called to a different kind of priesthood.

But, right before we lost Gabriel, Andrew was hired on as a full-time professor at the seminary. It would become his job for the foreseeable future.

Unlike an ordinary teaching position, the seminary is a family vocation. The rector of the seminary is a wise man who knows that friendship with families is an important part of forming future parish priests. From the beginning of our marriage, Andrew and I have felt called to the charism of hospitality. Welcoming these guys into our hearts and prayers (and sometimes over for dinner or yardwork) has been a very natural fit for our family's vocation. Having a background in theology, I have especially enjoyed getting to support Andrew in his work at the seminary. 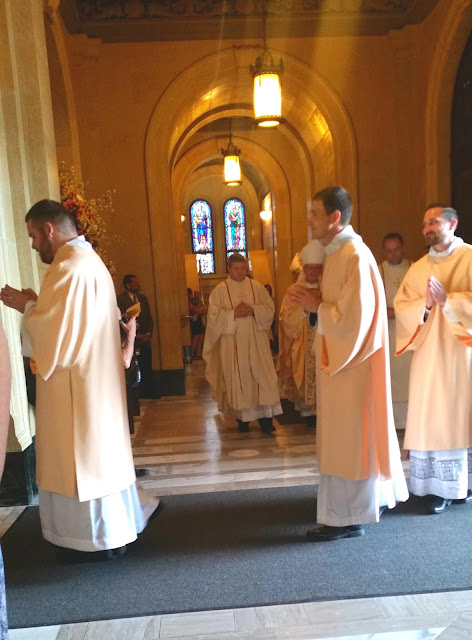 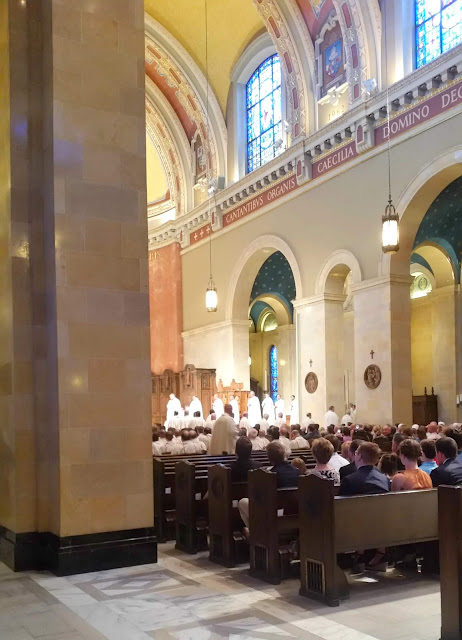 One of my best friends is a foster mother. She's described the emotional rollarcoaster of foster mothering, and the need to love intensely, even knowing that you will lose that child from your life. In fact, if you do foster mothering well then that child will be removed from your care and reunited with his or her family. That is a success story.

This past weekend, seeing our dear friend being given back to his diocesan family, I knew that we had succeeded in helping support him through his formation. I saw him flourishing, and I saw the joy of the people of his diocese, as they embraced him. 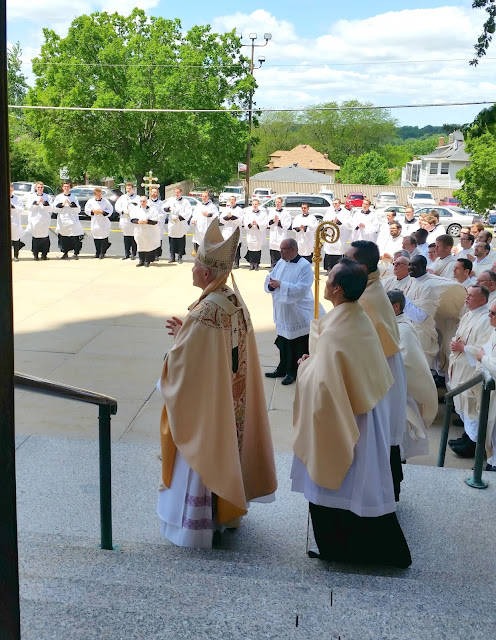 In my wildest dreams, I could never have envisioned this life that I am being called to. I could have never imagined being married to a seminary professor, and raising my children in the midst of this beautiful community. I could never have imagined chasing crawling babies and running children through the halls of a seminary. I could never have imagined countless hours spent rocking a baby to sleep in the back of the seminary chapel. I could never have imagined the exquisite little joys - the time I was rocking Zelie to sleep and one of the seminarians went out of his way to ring the chapel bell extra quietly so it would be "perfect for an infant," or the time that I was worn out by motherhood and the seminarians obliged by tossing my giggling preschooler in the air to keep her happy for me. (When I thanked them, I told them, "Thank you guys so much! The next time I'm having a hard day, I should just bring the girls over so you can help me with them." "That would be so fun!" they responded. #blessed)

But I also couldn't have imagined the sorrows and the separations and the seriousness of taking these men and their intentions into my heart. In a way, mothering Gabriel prepared me for this particular vocation. I wouldn't know how important it was to let go and give a "child" (spiritual or otherwise) back to God, if it wasn't for him. I wouldn't have realized that I was only a small piece of their journey, and that that's okay.

And as painful as infertility/subfertility/hyperemesis gravidarum and using NFP to avoid pregnancy is, if it weren't for all of that, I wouldn't be as free as I am for spiritual motherhood. If I had a large brood of kids, I wouldn't be able to easily pack them up and take them for Mass and lunch at the seminary every week. I wouldn't have the time or energy to sew up a set of vestments for a friend
or two who needed them. I wouldn't have the emotional energy to invest so much time and so many prayers into friendships with these guys.

I look back over the course of my life, and I know that this spiritual motherhood is something that God has been preparing me for all along. I am in awe of this unexpected vocation.

But that doesn't dull the pain of having to say good-bye to these guys. It also doesn't begin to describe the joy of seeing them live out their vocations. 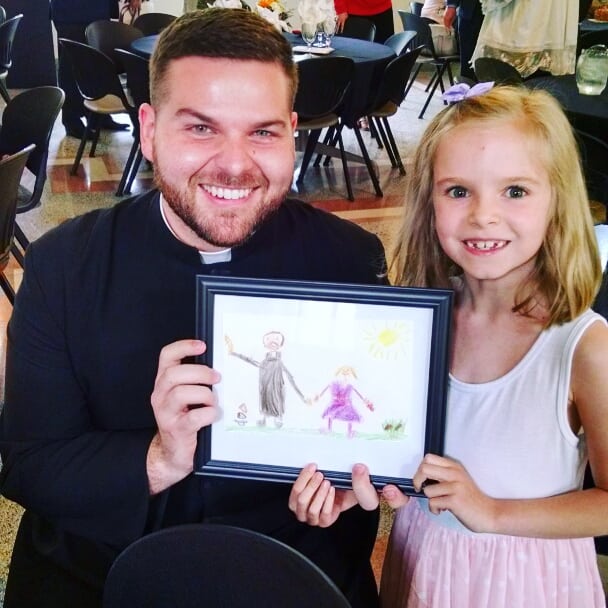