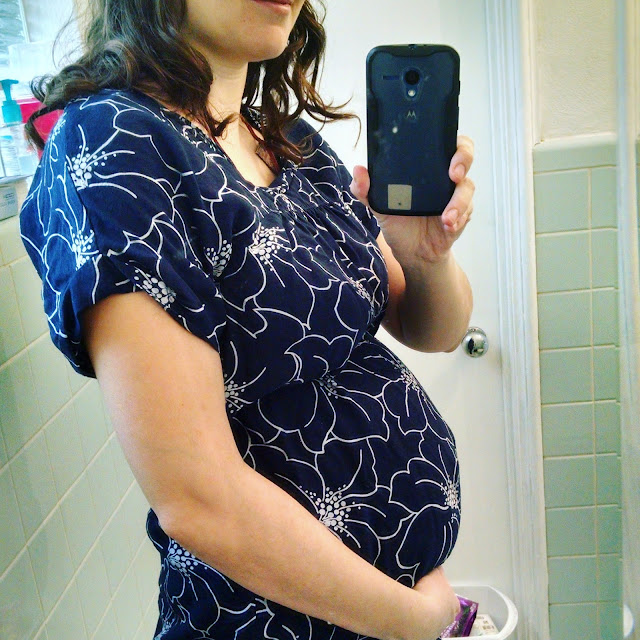 Last week, I was officially 19 weeks pregnant with this newest love of ours, and we had our mid-pregnancy/anatomy ultrasound done. Ever since Gabriel's second ultrasound, the one where we found out we had lost him, I tend to dread ultrasounds. Every one is a reminder of the innocence that I've lost forever. I know there is no guarantee that I will hold a living child in my arms.

Thankfully, this ultrasound went beautifully! Baby was super active (you can see a little tip of a hand being touched to a forehead in the picture below...those little arms and legs were waving everywhere!) and super healthy. All anatomy looked fantastic, heart was functioning beautifully and pumping strong, and it made all the suffering of the past months absolutely worth it!

We also found out the gender of this newest little Chronister...ready? It's a.... 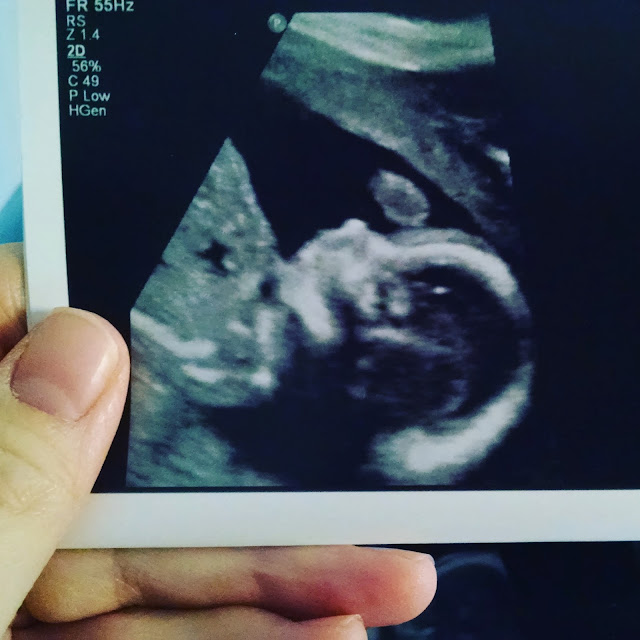 ...third baby girl!!! Our oldest two are elated! Therese jumped up and down when we brought home the pink balloons and shouted, "Mommy! Mommy, it's just what I wanted!" (Maria was just excited about the balloons, but I can't blame her. They were pink and they were shiny and they were hearts. What's not to love?) 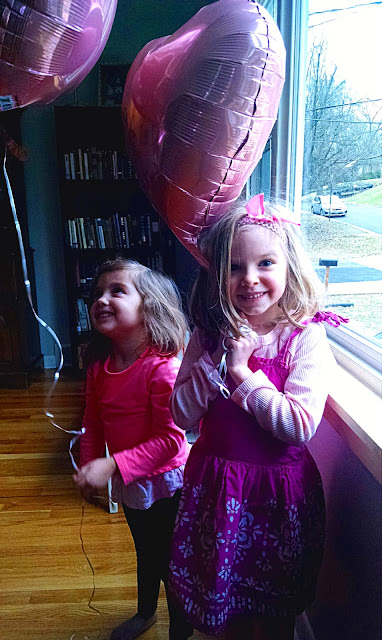 Although I very much hope to have a little boy at some point, in a way it was a relief knowing this little sweetheart is a girl. I know girls. I have experience with daughters. I even have a bin full of baby girl clothes waiting for our third daughter to grow into.

But there was also another reason why I was glad to know that this is a girl. Because it gave me further affirmation that Gabriel must be a boy. For one, this pregnancy has been every bit as miserable (and then some) as my other girl pregnancies. It has followed the pattern exactly, only varying slightly in severity. Gabriel's was my mildest HG by far, to the point that some days the HG was almost more like normal morning sickness. My body responding to treatment with just one medication, and I felt pretty sick, but it was much milder than my pregnancies with my three girls. (This also means that, hopefully, any future boy pregnancies will be less severe, HG-wise.)

I also heard about this one theory that you can predict the gender of a baby based on which side the baby implants in the uterus. I have no idea if there's any truth to that, but all three of my daughters nestled into the same side of my womb, and Gabriel found an entirely different spot. So, there's that.

I can't know for sure in this life, but it was further confirmation that gave me hope that maybe, maybe, Gabriel really is a little son.

I have a lot of friends who have lost babies to miscarriage or stillbirth, and I think one worry at the back of my mind was...what if I end up loving my newest baby more than Gabriel?? What if this new baby just felt like a "replacement baby"?

Surprisingly, my love for Gabriel has only grown with the life of his younger sibling. Our Gabriel is now a big brother, and in the depths of my heart, I can sense the ways that he is fulfilling that role. I can feel his prayers for me, for his baby sister, for his daddy, and for his big sisters. He is still, very much, a part of our family. We talk about him, think about him, pray for him and ask his prayers most every day. And my love for him hasn't waned one bit. It's only grown.

I monitor my fertility, and I know what my "signs" look like when I'm able to conceive a child. The cycle that we were blessed with baby sister was the last possible cycle that I could get pregnant before Gabriel's due date. I had heard from so many people who told me that they lost one baby, and then - before that baby would have been born - they conceived another. And I'd heard from so many moms that there was a kind of healing in that. The youngest child wouldn't have existed if the older had lived, and there was a consolation knowing that two children existed in a span that would normally only allow for the one.

I knew that it didn't seem like I would be able to get pregnant, and I had reconciled myself to the fact that I wouldn't have that consolation, "rainbow" baby before Gabriel's due date. I've had issues with infertility, and it didn't surprise me that it wasn't easy to get pregnant after Gabriel. Although we had tried and hoped and prayed, it didn't look like I was pregnant, and I was convinced I wasn't.

When I got the positive pregnancy test...I was in total disbelief. I still didn't believe the second test, or the bloodwork. When our first ultrasound showed that we might be losing our newest baby, too, I was heartbroken. The child who I could barely believed existed might not make it after all. I lost it.

And then two things happened. 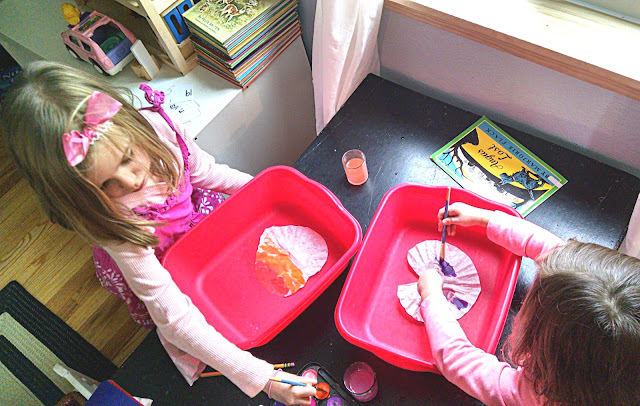 First of all, I realized that our newest baby had a big brother who was (most likely) in heaven. A BIG BROTHER. Of course he would want to pray for her. So, I asked him. I am convinced that this sweet big brother not only prayed for the existence of his baby sister (to console his poor mama's heart) but that his prayers may have also been what saved her life. Since that first ultrasound, her growth has been absolutely perfect.

In my lowest moments this pregnancy, the times when it felt like I was dying (even though I knew I wasn't...because hyperemesis gravidarum feels like you're dying, since you end up living your days focuses on basic survival and in bed or making visits to the hospital, like someone who is terminally ill) I asked Gabriel to pray for me. I asked him to pray for his baby sibling. And that gave me peace. Knowing he still has a very real role to play in our family means so much. And now, knowing that he is the only brother to three sisters??? Their future boyfriends don't stand a chance against the intercession of their brother.

Mass has been a real consolation to me, since losing Gabriel, since I know that at Mass the veil is briefly lifted and we get a glimpse of heaven. All the saints and angels are present at every Mass. That means that I can have great hope that, at Mass, my whole family is briefly reunited through the  presence of Christ in the Eucharist.

One Sunday, though, the reality of that really hit me. I was sitting in the pew, praying after Communion. Baby sister was kicking me in utero, Maria came over for a snuggle and a prayer, and then even Therese came over, to join in our snuggling. Suddenly, it hit me - every time I go to Mass with my family, I am a mother of four. I get to embrace and pray with my Therese, my Maria, my Gabriel, and my youngest daughter. All six of us are reunited.  We are reunited in Christ, just as we will be one day in heaven.

I've often felt jealous of those mamas with pews filled with little ones. But that moment, embracing my three living daughters and knowing that - through the Eucharist - my son was with me, too...I felt like the richest person in the whole world. The reality of four children hit me. There were four little fruits of our marriage. Four little children we existed because of our vocation to marriage. Andrew and I, when discerning if we were called to marriage, often wondered what God's special plan for us would be. And in that moment, I could tell you. I could name four people who are part of that plan.

And you may not be able to see a pewful of children beside us at Mass, but that's the reality - in the seven and a half years of our marriage, we've been blessed with four children. Four children! There once was a time when I wasn't sure if I would ever be able to have any children. And we have four! And at each Mass, reunited with Christ, and through Him with our Gabriel, we are a big family. We are parents, once again, of four children. Four little souls who pray with us at each Mass. That reality blows me away. 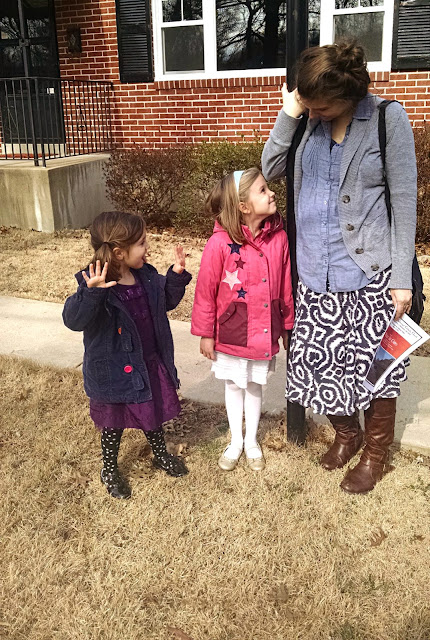 Awhile back I wrote:

With the existence of his baby sister, I'm beginning to get a sense of God's plan for Gabriel. It's only a small piece of that plan, but I now know that his intercession for his family is part of the work he is doing now. I have a feeling that there is so, so much more that I don't understand yet.

And as my belly swells and our youngest daughter grows bigger, my love for Gabriel grows, too. He is still, so much, an integral part of our family. Heaven and the resurrection continue to feel more real to me than ever before. And we have a member of our immediate family of six, who has gone ahead of us and is praying us all along on our journey.

And my love for my youngest daughter? It grows more and more by the day, too. I am still often filled with disbelief that she exists! She is an incredibly busy, active little girl, but I still have moments when I feel her kick and wonder, "What WAS that??" And then I remember, "Oh, right. Baby. I'm pregnant." I have been filled with wonder at the lives of each of my children, but the life of this child is the first I am experiencing with the knowledge that not every child survives. And so, with the passing of each milestone, each kick, each doppler reading of her heartbeat, each wave of nausea - I am filled with wonder.

And I was reading over old blog posts recently, I remembered something else. I remembered getting into the elevator after the appointment where we learned we lost Gabriel, and having a brief, clear image of a healthy baby girl come to mind. It came out of nowhere but gave me incredible peace, as if God were saying, "There is another child coming after this." I had forgotten about that, but now I realize...this little girl is another piece of the puzzle. She is another part of the unfolding of the mystery of God's plan, in the life of our little family.