Grief and That Dumb Dog

I just don't get the way that God is working in my life lately. This whole year has just completely baffled me.

First I was hoping and praying for a baby. Then God sent one to me, and took him back. Then a million other things happened. Andrew graduated from graduate school. We bought a house. Andrew started teaching full time at the seminary. We got a dog.

I just want to make it clear...I don't actually think she's dumb. She's a cute little stinker. And, as puppies go, she's a pretty good one. But I didn't grow up with a dog, and I'm about as illiterate in puppy language as it is possible to be. In fact, bringing Agnes into our home has left me feeling almost as overwhelmed as I felt after bringing our first baby home...without the benefit of the rush of hormones that made me bond with my newborn.

No offense to Aggie. It's just that I had visions of bringing a new, sweet baby into our home this year. But, in all my imaginings, it wasn't a puppy baby I was envisioning. It was the baby that was growing in my womb.

Instead, that baby's tiny body is buried in the ground and I'm left with a puppy who steals my heart half the time, and makes me want to pull out my hair the other half of the time.

There are times when this dog reduces me to tears. I took her out with the girls the other day and was so overwhelmed you would have thought I had an extra toddler in tow. It didn't help that I took her to Petco (or "Pets Go" as our oldest thought it was called) and the people helping me were referring to her as a cute kid. Don't get me wrong - I'm starting to get the "dog parenthood" thing. I don't refer to myself as a dog parent (mainly because I'm still overcoming the latent fear of dogs I had as a child) but having a dog is TONS of work and requires lots of love and patience. Having a puppy for two weeks has made me had more respect for those who have dogs, and who have had them for years. Let's acknowledge that God asks us to be good stewards of creation, and caring for and loving and treasuring pets is an incredibly beautiful way to live that call out.

So, really, it's nothing wrong with Aggie. It's me.

It's that stupid, dumb grief. I can't seem to shake it.

Every new thing that I take on, since the death of Gabriel, seems like a betrayal of him. Because my pregnancies are so stinkin' hard with my hyperemesis gravidarum, there are a lot of things that I don't know that I would have been able to tackle, had he lived. I wasn't sure if I was going to be able to make it to Andrew's graduation. I can't imagine buying a house and moving - let alone painting the entire upstairs of a house - pregnant. And I can't imagine getting a new puppy while pregnant. So, poor Agnes is just one piece of a path that leads me farther and farther away from the child I lost.

Sometimes, I think I'm subconsciously resisting the marching on of life. Sometimes I run forward, full throttle. Other times, I can sense myself resisting. I don't want it to seem like he never existed.

I had multiple encounters this week with triggers...triggers that reminded me of Gabriel and what I lost all over again. One trigger was when we went to Mass at the seminary on the feast of Our Lady of Sorrows, and the priest was talking about how Mary had lost her only son and I was like, "Oh, right. I lost mine, too." (Although, technically, we don't know for sure that Gabriel was a boy, so I may have lost my third daughter. Either way, still the grief of a child lost.)

Later, I was talking to one of my good seminarian friends, and I told him, "It feels like all I wanted was a baby, and God just gave me a dog instead."

Because that's really and truly what it feels like. I used to dream about getting a puppy when I was younger. This would normally be a fun new thing to take on. Instead, it's wedged into the experience of grief.

Every once in a while, I take something to prayer and feel semi-ridiculous praying about it, because I know that God has already given me the answer. I prayed pretty hard when we were looking for a dog, that God would lead us to the right one. Agnes is clearly, clearly, the right temperament for our family.  She's a puppy, which means she's crazy at the moment, but you can just tell after a few minutes with her how excessively sweet she is.

But now, even after getting her, I feel like I sometimes come to God and am like, "So, this puppy. I can't take it anymore, God. We just have to return her!"

But God knows me well enough to know what I'm really praying, "Give me back my baby. I want that craziness, not this craziness."

And God seems to respond, "Nope. Be patient. This dog has a role to play in your life."

Sometimes I haven't the faintest idea what that role is. Other times it's glaringly clear. 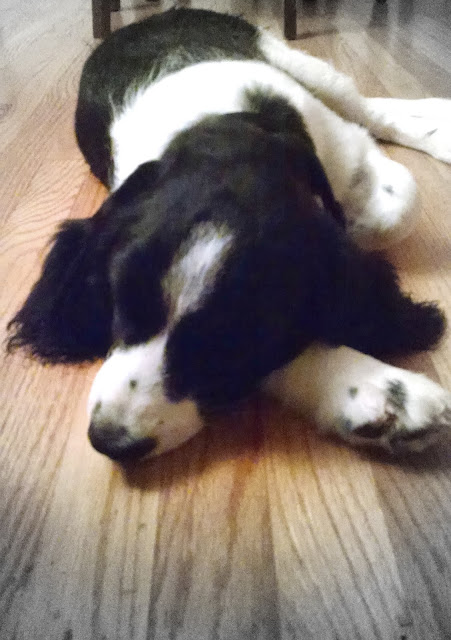 I came home last Saturday night, fresh from writing on this blog and writing a different article about Gabriel for another site. I was a wreck. Before I came into the house, I was literally sobbing in the car because I missed Gabriel so much. I came in the house and was instantly greeted by that ridiculous puppy of ours. And then...I gathered her up in my arms and cried into her fur, and was surprised by how much it helped.

So maybe God is going to work through her after all. Still don't understand what He's doing, but I can see He's doing something here. I just need to learn to sit back and trust.