The Gift of Spiritual Motherhood (and a Godson Update!)

I've finally gotten to hold my sweet godson. You know, the one we were praying for a miracle for?

To say his healing has been miraculous would certainly be an accurate statement.

The week that I asked for your prayers was an incredibly rough week for this little guy. His first week of life was full of ups and downs...mostly downs. His wealth was far more fragile than the doctors were expecting, and it quickly became clear that the doctors weren't optimistic about him making it.

Then you all prayed. And you asked Servant of God Leonie Martin to pray. And wonderful things began to happen. His kidneys began working. His lungs matured. He went from 100% breathing support to none. He began to be able to nurse and bottle feed. He was finally able to be held, to be awake and alert!

His battle is far from done, but it looks like we will all have the pleasure to watch this little love grow up. I'm not sure what God's plan is for him, but I have the feeling it's a big one.

The day after Gabriel's funeral, our godson's sweet mother called me and told me that he was finally strong enough to have a few more visitors added to his list. Andrew and I were officially approved to come and see him! Of course, this lovely friend of mine was incredibly understanding and told me that if that made things harder I should feel like I had to go see her little guy. I honestly wasn't sure how it would make me feel, holding a sweet, living baby boy in my arms after saying good-bye to my own. But one thing I did know - I was grateful that God had saved my friend's sweet son. And I wanted to get to meet him.

About a week later, she called, needing someone to drop off some of her pumped milk at the NICU. When I arrived, she was still there, and she took me back to meet my godson, for the first time. (I wasn't able to be present at the Baptism, but Andrew was.) She placed him in my arms, and took photographic proof of our meeting. It was my first time ever in a NICU, and it was more overwhelming than I was expecting. There are some incredibly tiny, sick babies in there. Just a little over a month ago, this little boy was the sickest one in there (which is saying something, considering how full this particular NICU is). He no longer is, but he still is facing a lot of challenges. Your prayers are definitely, definitely still needed and appreciated. (More on that at the bottom of the post.)

Because this little guy was born at full term and is now doing much better, he's needing a lot more social interaction, so his mama graciously invited me to visit him whenever I could - to hold him and talk to him and get to know him. Yesterday, I got to go on my first solo visit to my godson.

I have to confess, I was more than a little bit nervous about visiting a NICU by myself. I was afraid I would be too germy, or that I would do something the wrong way and make my godson cry or something. I also was worried about whether or not holding a baby boy that is not my own would be upsetting. Our pastor had emailed us that afternoon to check in on us (which was MUCH appreciated - as Laura so eloquently wrote, it's easy to feel forgotten about when you're grieving the loss of a baby). It reminded me the truth - I was only two week out from Gabriel's funeral, and three weeks out from losing him. And it still hurts. The hurt isn't as sharp as it once was, but I know it will always be there in some way.

I knew I had to get my first solo visit to the NICU over with. I knew that I just had to try getting to know the little boy who is my godson. I had to try to step in as a godmother to him.

I felt so awkward, walking back to his pod in the NICU, but the second I stepped in the door, his nurse gave me a big smile, and settled me in with him in my arms and a bottle in my hand. And something happened - I remembered how much I love babies. I remember how good I am with babies, and how confident I've become after having two newborns of my own. My voice naturally fell into a sing-song rhythm. As he hungrily sucked down his bottle - no small miracle! - I talked to him. I talked to him about his mama, his brothers, and I told him all about the many, many people who are praying for him. He looked at me with his big eyes, taking it all in. He studied my face. He wrinkled his nose in between gulps. He is just a little love, plain and simple.

I burped him, I made up little songs, and I rocked him in my arms until his fussing died down and his eyes became droopy. His mama is an absolute expert when it comes to babies. I knew that I was a poor substitute for that great lady, but I also knew that I had a unique gift to give this child. I am his godmother. That maternity is real, but different. And it is no small thing.

For the time I held that little love yesterday, my heart stopped aching. His snuggles, his weight in my arms, helped to soothe my weary heart. I could barely manage to let him go when it was time to leave, and if I felt that way, I can only imagine how difficult it must be for his mother to leave him each day. The suffering of NICU mamas is real and all too often hidden and forgotten.

When I was just a mother of one, and we were hoping and praying to get pregnant again, one of my best friends asked me to be a godmother to her second child. I cannot even begin to tell you how much of a comfort that was to me at the time. I wanted to be able to hold another baby in my arms and to have us belong together in some way. The opportunity to have a second godchild (and my first godson!) at that time was an absolute blessing. It allowed me to be fertile in my infertility.

It is hard struggling with infertility. It's heartbreaking to lose a child. I'm surrounded by fertile families aplenty, and it's a constant reminder of what I'm lacking.

Have you read C.S. Lewis's The Great Divorce? One of the people the main character encounters is a "great lady." The main character wonders who she is, and is told she is an ordinary woman who loved greatly. He and his guide have the following conversation:

“And who are all these young men and women on each side?”

“They are her sons and daughters.”

“She must have had a very large family, Sir.”

“Every young man or boy that met her became her son – even if it was only the boy that brought the meat to her back door. Every girl that met her was her daughter.”

“Isn't that a bit hard on their own parents?”

“No. There are those that steal other people's children. But her motherhood was of a different kind. Those on whom it fell went back to their natural parents loving them more. Few men looked on her without becoming, in a certain fashion, her lovers. But it was the kind of love that made them not less true, but truer, to their own wives.” (source) 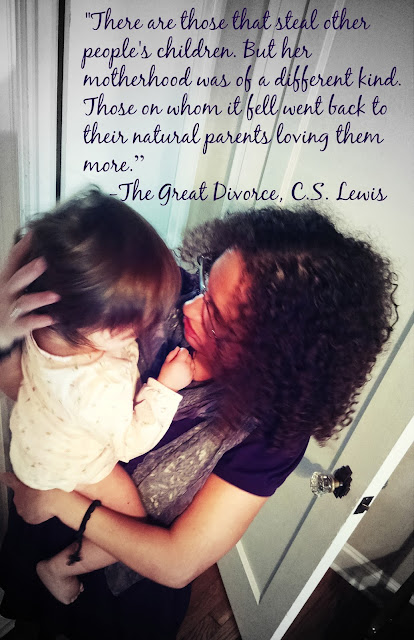 One of my children's sweet spiritual mothers.

This is a comfort to me, when I think of Gabriel. All I have left to give him is my love and my prayers. I pray daily that he may be in heaven, and I ask God to let him know that my love goes with him always. Being able to spiritually mother him is a real comfort.

But don't you see? Those of us who suffer from infertility, loss of a child, or from not having found a spouse yet...we can embrace spiritual motherhood in a particular way. Mothers of many physical children are called to be spiritual mothers, but those of us whose arms are empty or emptier than others have a freedom to mother many. We have a freedom to call a friend in need, to hold a sick baby, to listen to the vocation story of a seminarian, to respond in love and prayer to a friend on your Facebook feed, to pray for a friend who is doubtful - we can embrace many. And when we do, then one day, in heaven, we will be surrounded by many children, too. It may not seem like much consolation on earth, but to love...to love is worth the suffering. It is worth the sacrifice. It is worth the pain. And it is worth the waiting. Spiritual motherhood encompasses all of that.

If you're wanting to be a spiritual mother...can I invite you to begin by praying especially for the continued healing of my godson? Your prayers have already had a huge impact! Specifically now, we are praying for healing for his kidneys...miraculous healing, even! We are also praying that he may be able to have all oral feeds, and that he may soon be healthy enough to go home. Join me in asking Leonie to pray?

Dear Léonie our Sister,
You have already intervened with God on our behalf,
and we would  like to be able to pray to you officially,
so that many more might know you.
Come to the aid of parents who risk losing a child,
as you nearly died at a very young age.
Continue to uphold the families
where different generations have problems living together in peace.
Enlighten youth who question their future and hesitate to commit.
Show to all the way of prayer
which permits you to bear your limitations and your difficulties with confidence,
and to give yourself to others.
Lord, if such is your will,
deign to accord us the grace that we ask of you
through the intercession of your servant Léonie,
and inscribe her among the number of the venerable of your Church.
Through Jesus Christ, our Lord.  Amen.