Having Courage and Being Kind (Cinderella and Love in Suffering)

The girls and I took a big, long road trip this weekend. We drove to Omaha, Nebraska, for a deaconate ordination. Two of our dear, dear seminarian friends are now deacons, and we were so glad to be able to pray and celebrate with them. It was such an incredible joy, and totally worth the trip! 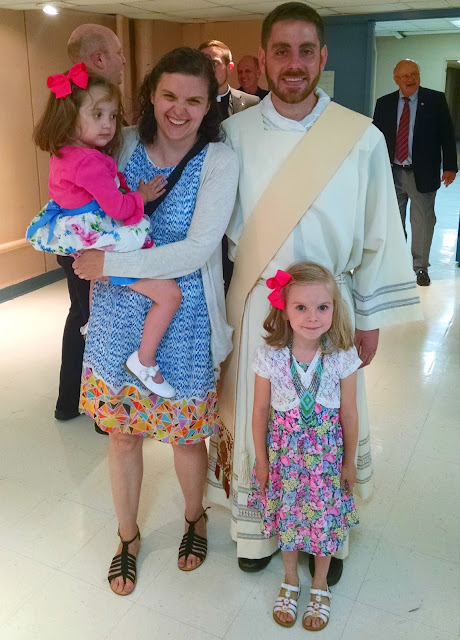 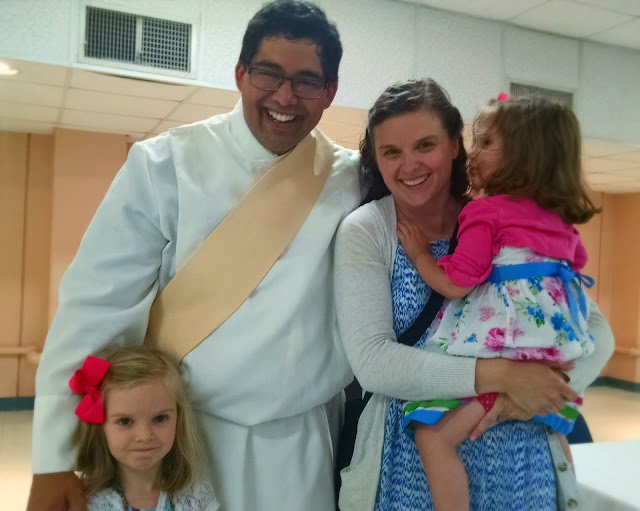 I've taken plenty of road trips alone with the girls, but this was the longest we had ever taken. We spent something like 18 hours in the car over the course of two days, and tensions definitely rose on more than one occasion. One thing that got us through the rough patches (all three of us!) was the beautiful newer version of Cinderella.  I first watched it when I was still pregnant with Gabriel, and it was one of the movies that got me through the difficult two weeks of waiting to see if he was still alive.

I couldn't watch the movie as I was driving, obviously, but I had it piping through the main sound system of the car. There are so many reasons why I love the story of Cinderella - especially this beautiful version - but one of the reasons why I love this particular version so much is because of the simple message, "Have courage. And be kind."

In the course of the movie, you see Cinderella suffer - really, and truly suffer. She loses both of her parents, and undergoes terrible emotional, verbal, and even physical abuse from her stepmother and stepsisters. She has every reason to become bitter and hateful...but she doesn't. She chooses courage and kindness, and her suffering makes her into an even more loving person than she was before. 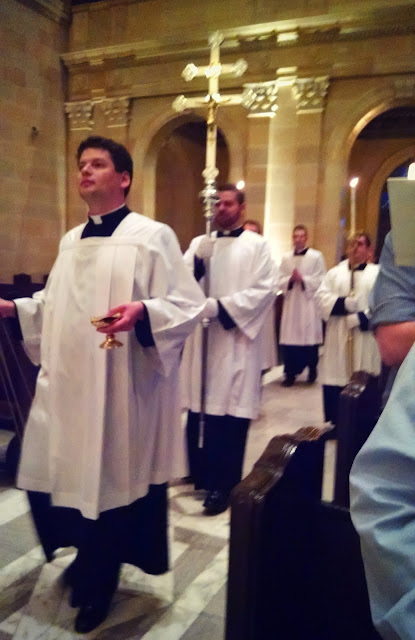 It doesn't take a theologian to see the connection there with our own beautiful faith, but of course there is something about the telling of a story that makes the message even stronger.

In theory, I am willing to take up my cross, and willing to suffer. It sounds so romantic. In reality, I dread suffering. I'm often not very good at it. I try to be like Cinderella - to be courageous and kind. Sometimes I succeed, and often I fail. But saints are not those who succeed every time. Rather, they are those that keep getting up again, and turning to God, again and again and again.

While we were in Omaha, we saw a number of our dear, dear seminarian friends. As we were leaving the ordination, we stopped to say good-bye to one of our best friends (my oldest daughter's best seminarian friend, to be exact). He was one of the seminarians who was able to make it to Gabriel's burial and funeral (poor baby was buried during finals week, so not everyone who wanted to be there was able to be), and he has been a true friend to our family. As we were getting ready to leave, he asked me, "And how are you doing?" I knew he was asking how I was doing since losing Gabriel, and I can't begin to tell you how much it meant having him remember to ask. He proceeded to ask how I was recovering, etc.

Here's the thing...no one talks much about what a post-partum recovery is like when you've lost your baby. Even if you were still fairly early on, your body goes through a very similar experience to birthing a healthy child. I have definitely not physically or emotionally completed my recovery from losing Gabriel. Some of it is the suffering unique to miscarriage, but some of it is remarkably like what I experienced after having my daughters.

I can go for days feeling just fine, thinking that I've finished recovering. Then, something triggers the memories, and I realize that it's only been a month (yesterday) since losing Gabriel. I have so many friends with babies right now, and I love holding their precious little ones. But then I walk away and feel so sad and empty, because I realize that I will never get to hold Gabriel again in this lifetime. (If you are one of my friends with a baby, please don't stop offering to let me hold your baby! As painful as it is, it's also incredibly, incredibly healing and comforting.) 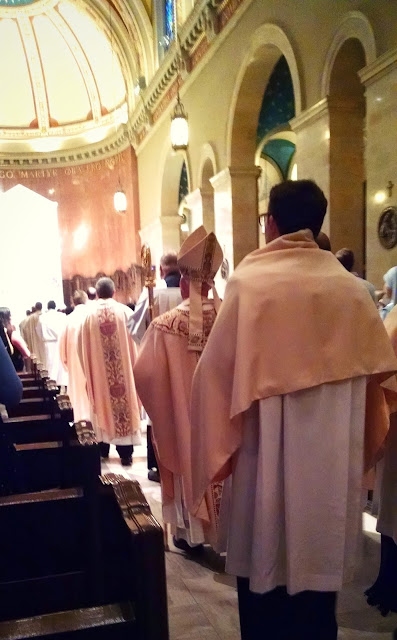 I went to another seminarian's first Mass yesterday, and almost started crying when he gifted his mother and father with special gifts. There is a tradition that a new priest gives his mother the cloth that was used to wipe the Chrism oil from his hands at ordination, and his father the stole he wore when he heard his first Confessions. They keep these gifts and are then buried with them, a sign and reminder that when their bodies are resurrected, they can claim the sacrifice of having given God a priest.

Back when I was in college, trying to discern if God was calling me to marriage or the religious life, I used to pray that I would have a son, and that God would call that son to be a priest. Now, we feel that we may have been given a son (although we'll never know for sure in this life) and he will never be an ordained priest, although I hope and pray that he ministers and adores at the throne of God. Seeing this wonderful young man offer these gifts to his parents was one more reminder of what we have lost.

And then today, I had to go shopping to try and find some much needed new shorts and tank tops. I had been waiting to buy new shorts so that I could buy maternity ones, but now I don't need maternity ones...but my body has still changed. And my old shorts don't fit.

I spent a miserable several hours going to multiple stores, trying on tons of clothes, and realizing - I still look pregnant. And although I'm back to my normal, healthy diet, and am exercising regularly, I am far from my usual weight. And each time I look in the mirror, it's a reminder of what I've lost. It's a reminder of the baby I carried inside. Each time I see my "bump", it's a reminder that I should be looking for clothes that accentuate it right now - not trying to find clothes that will hide it. And that's so hard. I am so afraid of the day when someone asks me if I'm having another, and of having to admit that I'm not pregnant. I want to yell to the whole world - I'm just post-partum! There's a definite movement for women to show off their post-partum bodies, to be honest about how they look after having a baby. But mothers who lose babies don't do that. That bump is just a painful reminder of what should be but isn't.

Although Gabriel's pregnancy was my third pregnancy with hyperemesis gravidarum, it was the first one that I didn't lose weight in my first trimester. For one, my nausea wasn't quite as intense (probably because he wasn't growing normally), but I also was on the medication I needed, right from the start. When we went in for our first ultrasound and found out that Gabriel was measuring small, I remember coming home and being overwhelmed with sadness. My depression began to kick in, and I found myself not wanting to eat. What was the point? My baby wasn't going to make it anyway. But then I realized - I had to fight for this child. I had to force myself to eat whatever I could, even if the food wasn't the healthiest (I could only tolerate fast food/takeout, which is one of those weird HG things). I had to give my baby the best chance of survival possible.

Most of the weight that I gained, I gained in the final two weeks of my pregnancy, the two weeks of waiting to see if Gabriel was going to survive. It was an act of love on my part, knowing deep down that he probably wouldn't survive, but that I had to choose to do what I could to help him survive anyway.

So the other night, when my seminarian friend asked me how I was doing, I was wearing one of the dresses that I wore when I was pregnant with Gabriel. And, unfortunately, my belly swelled just a little bit under that dress. And I felt so incredibly self-conscious. All I could think to tell him was, "I'm just trying to lose that weight. My body still looks pregnant...I guess it's like my own personal stigmata, haha." 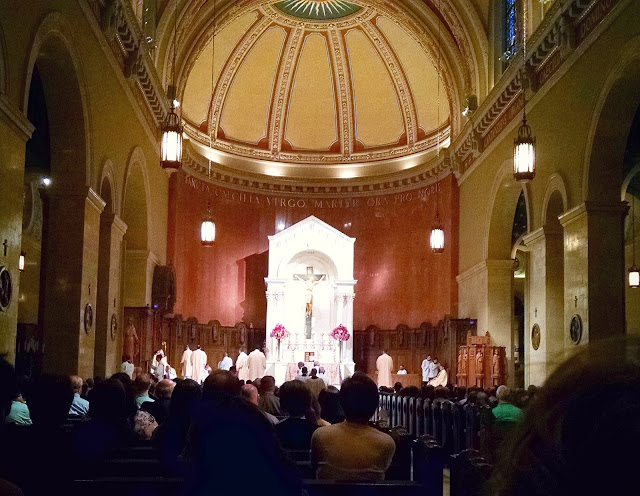 Because, that's the thing - suffering usually isn't beautiful. At least, it's not beautiful in a worldly sense. I definitely didn't feel beautiful when I was trying on clothes today. I just felt self-conscious - self-conscious of that little bump that won't go away yet. It's ridiculous, because no one expects a third time mom to be back to her pre-pregnancy figure a month post-partum. I certainly shouldn't expect it of myself. But it's just another reminder of what was but no longer is. And it hurts.

But here's the thing - love hurts. It just does. You only need to look at the cross - the most perfect love that ever was - to know how much love hurts. It isn't glamorous, or attractive. It takes courage to suffer. It takes tremendous love to choose kindness in the midst of pain.

It takes courage to love, even when love hurts. The alternative seems much easier - coldness, distance.

But this is the biggest lesson that my sweet Gabriel taught me. He taught me that love doesn't need to end. He taught me that we can love our children even when we have to let them go. I didn't expect to learn that lesson for many, many more years (once the girls were grown up and going their own way in life). I always worried that I wouldn't be able to love, even in the midst of parting.

And to be honest, I wasn't sure at first if I could keep loving Gabriel. When I saw him at his first ultrasound, saw how small he was, a part of me detached. I was afraid of loving him. Then I came home and decided to force myself to eat to give him a chance at survival. And in doing so, I chose to love him.

Did loving him - does loving him - make it more painful to be separated from him? Yes. It would be so much easier if I could just bury my feelings, and pretend Gabriel wasn't a real baby, that he hadn't existed. But he did. I saw his heart beating on the screen. I suffered from HG. And I also saw that terrible, terrible absence of a heartbeat on that final ultrasound.

And in experiencing that - in falling in love with Gabriel, and continuing to love him even after losing him - I realized something. That is exactly what I am called to do with my daughters. That's what I'm called to do with any spiritual children of mine, too. I'm not called to desperately cling to them, and then to cut myself off from them emotionally at our parting. I'm called to love them, always, and let them know that even when we aren't together, my love goes with them always.

Isn't that what God asks all of us to do as parents? He doesn't call us to be perfect, but he does call us to love always.

It took my littlest love to teach me just how powerful that love could be. My sweet, sweet Gabriel.
Email Post
Labels: domestic monastery Gabriel miscarriage ordinations seminarians vocation vocations