So, as I mentioned the other day, Therese started attending our parish's preK. What that means is that I suddenly have a lot more time to spend with the littlest in the pack: 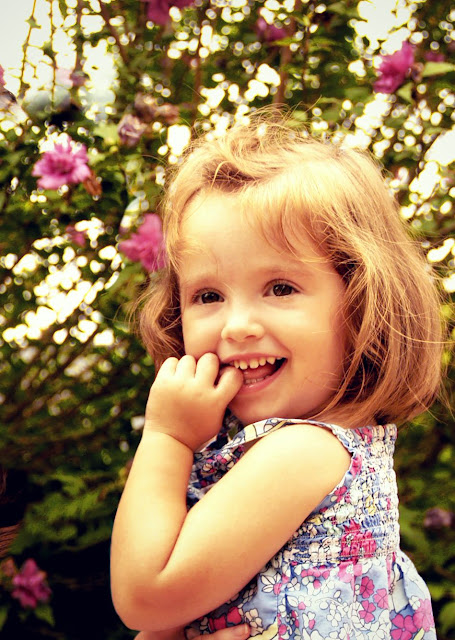 I love Maria with all my heart, but...she's two. I know people talk about terrible twos, and believe me, we have our fair share of them. But what I've discovered with her (and with her big sister, when she was two) is that the reason why two year olds throw fits is because they aren't getting everything they want. I'm sure that that's no news to you, but it's important to state. Of course, a two year old's worst enemy is herself. A two year old often doesn't know what she wants or she forgets what she originally wanted, halfway through her tantrum. Two year olds aren't logical.

Even if a two year old did know what she wants, she can't possibly articulate it. An absolutely brilliant two year old will talk in full sentences. Most newly turned two year olds use two word phrases (if you're lucky) and those phrases are often nonsensical. 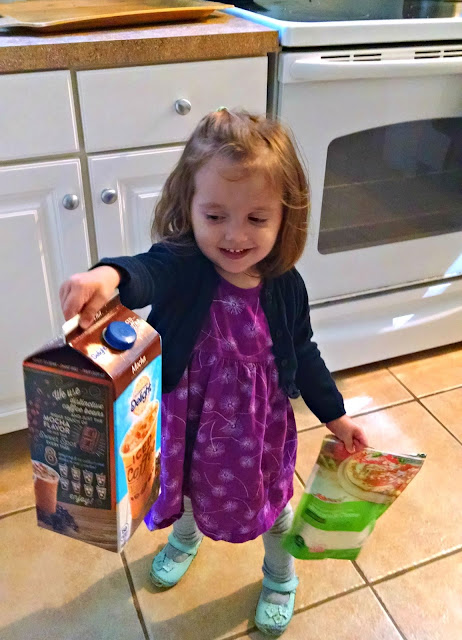 For example, while we were eating dinner the other night, we were all talking about our days. Maria kept insisted on having this conversation with us, in response to anything that was said.

Over and over again.

Despite the fact that two year olds don't know what they want, there is one thing that they truly need and thrive on - attention. Poor non-firstborns have to get it while they can, but they crave it nonetheless. I really realized how true this was when we visited my family this summer, and Maria threw next to no tantrums. She attached herself to her Grammy - who gave her tons of loving attention - and she had no need to throw tantrums. 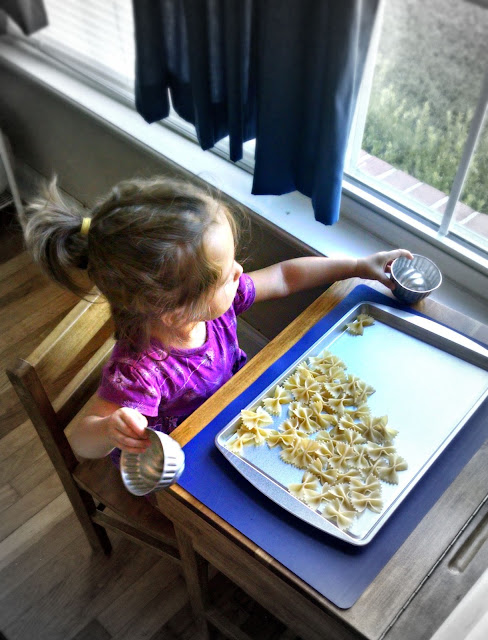 In an ideal world, our homes (or at least our neighborhoods) would be teeming with inter-generational relationships, and our children would thrive with all that love. In the real world, that's not the case. Even people who live close to extended family (which we don't) or have older friends who try to help fill the grandparent gap in between family visits (which we do - pretty much every older person who meets the girls wants to adopt them) aren't fully experiencing the benefit of inter-generational living. (Incidentally, I really realized that when we did a podcast with Nell.)

Be that as it may, just because we don't have the manpower (or in this case, womanpower) to fully meet the emotional needs of a two year old, doesn't mean that there isn't something small we can do.

When Therese started school on Monday, I tried my best to race around doing things. Maria and I went to Mass, went for a hike at a nature center, etc. etc. It was a disaster! I thought that because I did those things with Therese when she was two, that Maria would be on board. But she wasn't! Far from it. Unlike Therese, the two mornings a week that we spend together are the only one-on-one time Maria gets with me. And she loudly protested me trying to be efficient during that time. 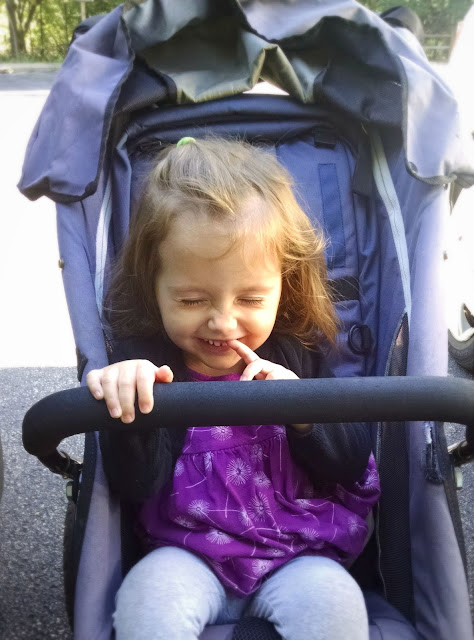 On the second school day, I completely changed my approach. I spent time with Maria, playing with playdough (her newest favorite thing) right from the start. Then, when we had to go out and get diapers, we walked to the store (because, thankfully, we live in an area where we can do that ). I slowed the whole day down, and just focused on being with her.

The most telltale moment was after we picked up Therese, and I was loading Maria back in her car seat. She started shrieking because she wasn't being allowed to sit in "Sissy's"  car seat. Normally, I would have taken a deep breath. Buckled her in as quickly as I could, and sat in the front seat trying not to cry. (This has happened more times than I can count, since we first heard her cry on the way home from the hospital.) But, today, I tried something different. I nuzzled close to her in her carseat, so we were cheek-to-cheek, and I whispered calmly in her ear. She loved the attention, and the snuggling (because snuggling is definitely her love language), and she calmed down faster than she would have otherwise. (In contrast to Monday, when she screamed the whole car ride after picking up Therese.) 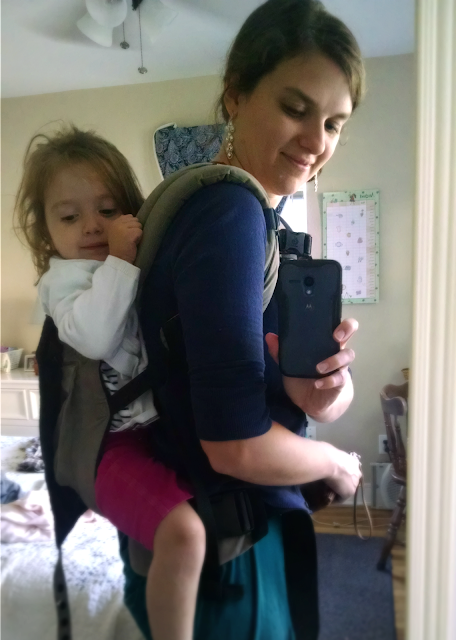 I am definitely the sort of person who tries to be efficient. I am the queen of multi-tasking, and I try to cram in as many tasks and activities as possible. But two year olds are not efficient, and in order to be effective in expressing my love to Maria, I had to stop worrying so much about being efficient.

This is precisely why God knew that I had to be given the vocation to motherhood. If I had been called to be a religious, I think I would have thought that I was a better person than I actually am. But being a mother - my failings are glaringly obvious. They're obvious in the face of a little two year old who spends her days at my side. And the remarkable thing is that I want to change, if it means loving her better.

That, I think, is how God works through our vocations, whatever they maybe. He works through love. In some ways, we are just like two year olds, and you can't talk sense into us. We are determined to be efficient, productive, and busy - even if that isn't what God is calling us to. It takes love - love for a child, a spouse, a friend - to help us to see that something else matters. Preaching the Gospel is not always an "efficient" task. Hearts are changed slowly, and we may never see the results. God calls us to trust that He will make it all come out alright.

I am terrible at trusting Him on that front. I want to keep barreling forward. Thank God he sent me a little person to remind me that my plan - efficient though it may be - isn't always the best. Sometimes, I just need to slow down. I have a long way to go, but I have the feeling that I'm in the tutelage of a master teacher... 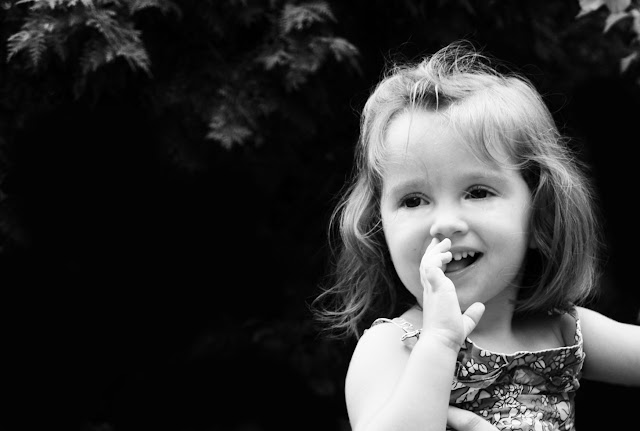