This is What Is Wrong With the Pro-life Movement

I am pro-life. The people in my family are pro-life. My friends are pro-life. But what I mean by pro-life is that they all are anti-abortion and euthanasia and (at least some, myself and Andrew included) are anti-death penalty.

I subscribe to Life Site News. mainly for the headlines. Sadly I find the writing and reporting in it to be somewhat subpar (typos and run-on sentences and overt biases). But, I want to know what's happening in the pro-life world, so I've kept subscribing to those daily e-mails.

The article shares that a woman from Chile was pregnant with a child who was diagnosed with Triploidy (basically has a whole extra set of chromosomes - three instead of the normal two sets). This woman suffered terribly, and was told that the condition would be fatal for her and her baby. She ended up having an "emergency" abortion to "save her uterus" and her life. Of course, Life Site News highlights the fact that the reflection the woman later wrote about this experience was called "The Abortion That Let Me Be a Mother," and goes on to bemoan the tragedy of abortion.

This is good and right. Abortion is a tragedy, and I would agree that they woman didn't need to have an abortion, but not for the same predictable reasons that Life Site News reaches this conclusion.

When I read this article, I had never heard of Triploidy, so I decided to do some research into the condition. Dig as I might, I couldn't find any accounts of mothers carrying a baby with Triploidy who had the exact symptoms of the woman in the article. Most noticeably, none of the sources I found mentioned extreme, nonstop vomitting and nausea as a part of the symptoms of the mother, which leads me to believe that there may have been a chance that - on top of carrying a child with significant special needs - this mother may also have had hyperemesis gravidarum. 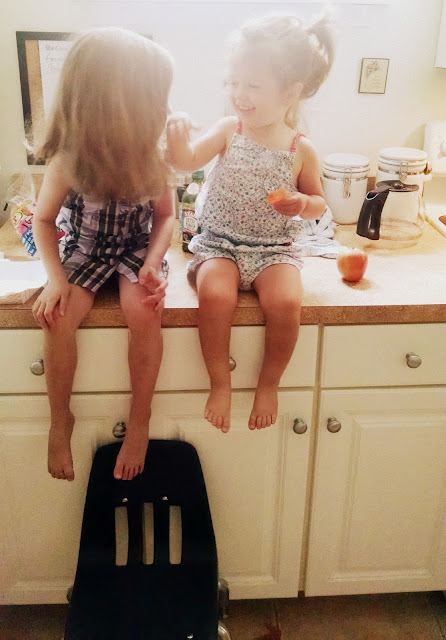 As a woman who has suffered through two hyperemesis gravidarum pregnancies, I can assure you that HG disrupts your normal sense of judgment. So, strike 1: no medical professionals really got to the heart of the nausea and vomitting this woman was having, and (from what I could tell) no one gave her the supportive measures necessary to survive this condition.

But strike 2 was even more serious - from the research I did, it would appear that the Chilean doctors (unintentionally or otherwise) didn't really give this woman the full scope of her condition and possible outcomes. From what I could tell, the greatest risk to the mother's health in these cases is pre-eclamsia (which can be closely monitored and treated with an emergency delivery if absolutely necessary) or of having the pregnancy turn semi-molar and cause cancerous tumors to develop on the placenta and spread (however the source that I read emphasized that this cancer is 100% treatable, and didn't seem to think it was life threatening).

Strike 3 was that the doctors failed to give this woman extensive information about the possible outcome for her child. Most babies with Triploidy do, apparently, miscarry during the first trimester. Of those that survive past that point, many of those children will also survive birth. Depending on the severity of the Triploidy, the child may survive minutes, hours, or years (in the case of mosaic triploidy, which doesn't result in a complete third set of chromosomes).

So, let's take a step back - yes, the fact this woman had an abortion was lamentable. But why was it lamentable? Because, had she had all the facts, she may not have even considered an abortion. If she did have hyperemesis gravidarum (as it would appear she did) she was never given counsel or support for that. She was told that cancer in her placenta would metastize and she would die without an emergency abortion. I suppose that wouldn't be impossible, but from all the sources I looked at, it didn't seem like that would be the norm. Finally, this mother's baby may have lived, maybe even for a long period of time, if she had continued the pregnancy with the proper emotional and medical support.

Was any of this discussed on either side? No. One side screamed, "You have no choice but abortion!" The other side screamed, "Abortion is evil! How dare you consider it." There was a sliver of truth in each side, in that Triploidy is a serious condition and abortion is evil, but - abortion shouldn't have ever been offered to this mother. For all practical purposes, she should have been able to survive - given proper supportive measures - until the baby was at the point of viability, and the baby may have lived, if only long enough for this mother to hold her much yearned for child.

After recently reading Beyond Morning Sickness - Battling Hyperemesis Gravidarum, my eyes have been opened to a very serious gap in the work of the prolife movement - how to reach out to women with difficult pregnancies. The author of the aforementioned book aborted her first child because she wasn't given any other options for treatment. This is not uncommon. In difficult situations like this, one side suggests abortion and the other side says "no" but neither side gets creative in terms of making it possible for a woman to survive a difficult pregnancy. What do pro-life ministries need to do in the case of a woman with a difficult pregnancy (especially one who is simultaneously struggling with a difficult prenatal diagnosis)? The need to raise funds to make sure that the woman can afford to receive in-home healthcase, arrange for child care (if there are other children), buy massive amounts of restaurant gift cards so the family doesn't need to scramble to come up with meals (especially with an HG pregnancy), and maybe even find a way for the mother and her family to receive mental health support, if applicable- all these actions should be a given. In addition to those logistical things, there needs to be easily accesible information that pro-lifers can plug into, to give these mothers and babies hope. Often, a doctor will speak in worse case scenario terminology, but we need to be able to offer them a glimmer of hope that their lives (and the lives of their babies) matter.

This is perhaps the hardest thing for me about HG. The physically suffering is awful, the misunderstanding and judgment ("It can't possibly be as bad as you're making it out to be. Everyone has morning sickness.") is lonely, but the sheer lack of hope can be overwhelming. It feels as if the suffering of a difficult pregnancy will never end, and you want to be reassured that what you are doing matters, and that the life of your baby matters. You don't want to criticized for not aborting that child ("Oh, well. You chose to have this kid.") or ignored in your suffering (which the pro-life movement sometimes does inadvertedly).

What does the pro-life movement need to do to succeed? We need to talk to women who have had difficult pregnancies and faced tragic prenatal diagnosis. We need to understand what their experience is, what their worries are, and what they need in order to have hope and not give up. I think the pro-life movement does a beautiful job of doing this for women in poverty or women who have been disowned or have no where else to go. But, if we truly want to convert people, we need to reach out to the women who can't reach out to us, who can't search for us online, who are too physically miserable to even look at a computer screen.

I'm reminded of a passage from the letter of St. James; a passage which talks about the relation between faith and works. James writes:

If a brother or sister has nothing to wear and has no food for the day,16and one of you says to them, “Go in peace, keep warm, and eat well,” but you do not give them the necessities of the body, what good is it? (James 2:15-16).

If we say we are pro-life, but we don't take the time to give physical and emotional support to women in difficult pregnancies, then what we're preaching won't be taken seriously. If we make ourselves a refuge for these poor suffering mamas, there's a chance we may change many hearts and minds.
Email Post
Labels: Hyperemesis Gravidarum pro-life