How a Good Father Can Help Save a Fallen World

Once upon a time (not in the fairy tale sense, but in the long time ago sense) Adam and Eve walked the Garden of Eden. In the cool of the evenings, God walked with them. They knew the real presence of their heavenly Father. Adam and Eve weren't born to a biological father, but they didn't need one. They had the most perfect Father, and knew only perfect Fatherly love.

Then the Fall happened, and lo and behold - Adam became a father. We don't any anecdotes of his fatherly abilities, but one can surmise that they were imperfect, judging from the fact that one of his sons kills the other one.

Fatherhood wasn't the same after the Fall. Not only did God not walk with man in the cool of the evenings, but biological fathers were not in a perfect state of grace.

(Pictures of baby's first Cubs game and Therese's first experience with a telescope.) 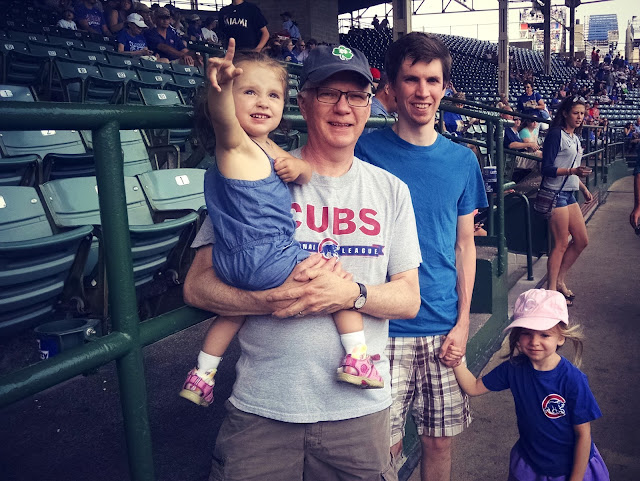 But everything changed when God became flesh and the incarnation happened. Jesus taught us to call God "Father," and not just Father, but "Abba" (which translates to "Daddy"). He taught us the perfect prayer of the Our Father, reminding us that we could trust in our Heavenly Father to meet all of our needs.

Christ also raised the institution of marriage to a Sacrament, thus reminding us that one of the works of marriage - the bearing and rearing of children if fertility allows - is holy, too. Fatherhood can be a road to sainthood, and fathers themselves play a role in their children's road to sanctity. 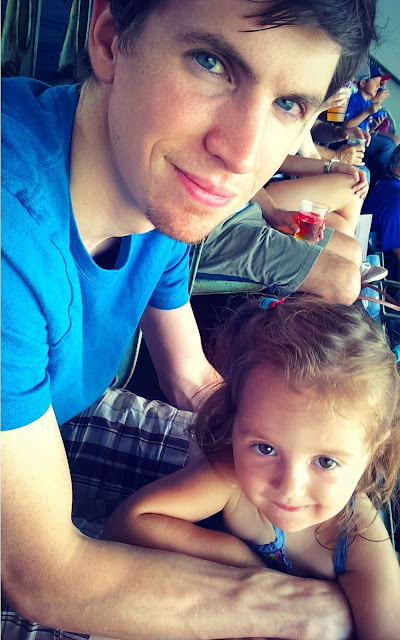 When I had finished my growing up years, I used to occasionally remark to my own father that his loving fatherhood made the love of God the Father more believable for me. My dad was not perfect, and he made his share of mistakes (as all fathers do), but he loved me very much. I remember being a small child and not feeling perfectly safe until I knew my father was home at night, or during a thunderstorm. My dad helped me to explore the world, as fathers are supposed to do, and he gave me the confidence to know that I was beautiful, loved, and supported. To this day, knowing my father is proud of me, and loving me, makes me a stronger woman. My own father made the love of the Heavenly Father credible - I had real-life experience with a father who was strong, gentle, tender, loving, and who cared for me and provided for my family's needs.

Fast forward to the year I was twenty-one, and I met a young man who reminded me a lot of my father. He was (and is) strong, gentle, tender, loving, and wanting to provide for a family. He had been raised by the same sort of father I had, so a relationship with a loving Father was a believable thing to him, too. 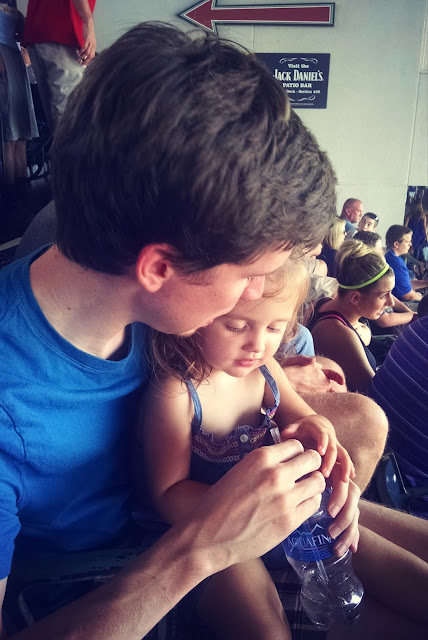 Having had such a strong father, looking for a man who would be a good father himself was one of my top criteria for marriage. It rapidly became apparent that Andrew would fit that bill. Now 5 years into this parenting gig, he has exceeded my expectations. He is a wonderful father, to the point that I have had other people comment to me about what an incredible father he is.

But let's be honest, many people don't have that experience of fatherhood I had. For example...Hushpuppy.

In the strikingly beautiful movie, Beasts of the Southern Wild, a little girl named "Hushpuppy" lives in a wild, marshy land somewhere south. The area she lives in is a spot south of the levy (and prone to flooding) known colloquially as "the Bathtub." Hushpuppy is often found scribbling little drawings and saying that, someday, the scientists of the future will find her drawings "and know that a little Hushpuppy lived with her Daddy in the Bathtub."

Her mother ran away, and so Hushpuppy is being raised by her Daddy (who is an ailing young man). Her daddy is far from perfect, often lashing out in anger, lacking gentleness because he is so scared, and wanting to teach Hushpuppy to be tough so she can survive. But despite his rough exterior, it is abundantly clear that he loves Hushpuppy. 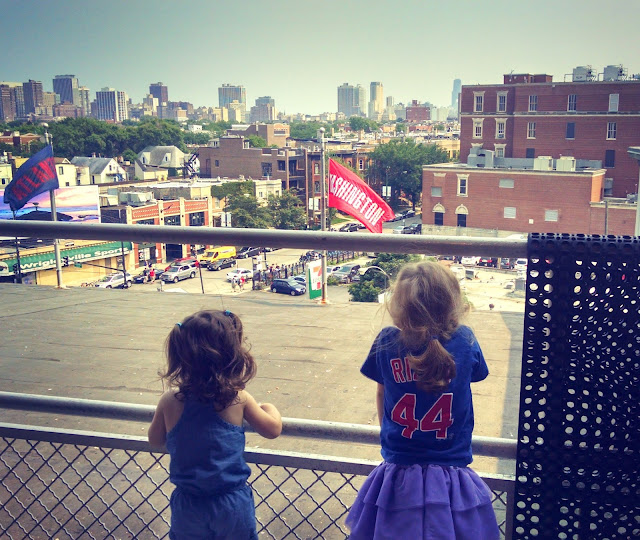 There are most certainly fathers who are abusive or who abandon their families. I am not talking about that sort of father here. I'm thinking of the average father who wants to love but who makes mistakes aplenty. I'm thinking of a father like Hushpuppy's daddy - not always knowing what to do or say but desperately wanting what's best for his child (to the point of being willing to sacrifice his own well-being for her sake). Although it is internationally acknowledged that a child has a right to a mother and a father, we're living in a society that proclaims that a child doesn't need a mother and a father. We're living in a time where we frequently put the desire of two adults (to have a child) above the well-being of a child who has an innate desire for a mother and a father, not just two loving mommies or daddies. That isn't hate speech. It's just a fact about how a child is made. And we're just one baby step away from telling children that there is something wrong with that inner desire of theirs. 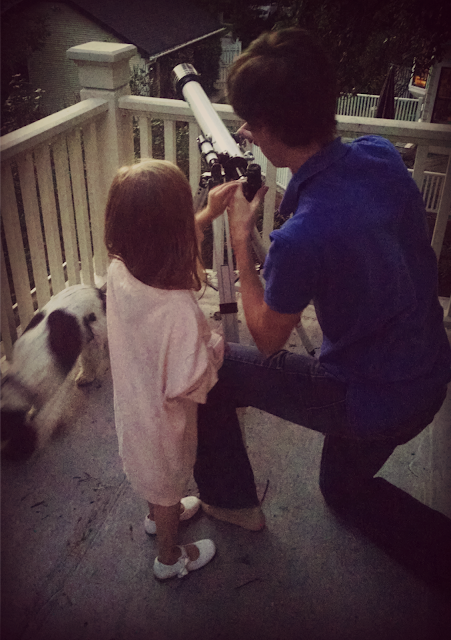 Long story short - we're living in a world where we're being told that fathers don't matter. But they do. In fact, the love of a father - even a less than perfect, but still "good" man - can help to save this fallen world we live in. Each child who has the experience of the loving care of a father, finds it more credible to believe in the message that there is a God who is their Father and who loves them immensely. Every child who encounters that sort of love can internalize the message of God's love much more readily.

I once heard a story about missionaries who were working in an impoverished part of the world, and who taught the children in their care to pray, "In the name of the Grandmother, and of the Son..." because their grandmother was the one who cared for them, and their father was absent from the picture. I understand why they would want to make that kind of adaptation, but something is still missing from that theology. As wonderful as the care of a grandmother is, a grandmother's love is not a father's love (if anything, it is closer to a mother's love). Nothing can replace a father's love! Although it was important for those little ones to see that God did care for them (like their grandmas), there is still something missing, something they are being deprived of, by not seeing the richness of who a father is. A father is not a mother. And no one in the world can really, fully replace a father.

Of course, even those who don't have a father, or this sort of father, still have the heavenly Father. The heavenly Father is all of this and more! But coming to wrap your mind around this reality is much more difficult if you haven't experienced it in a flesh and bone sense. Children raised without fathers, or with terribly abusive fathers, can most certainly become saints. They can thrive and be wonderful people (especially with the care of a loving mother or grandparent). But we still need to acknowledge that something is missing in their lives.

Of course, the hope is that we can help everyone to see that - regardless of the job your earthly father did or didn't do - you still have a Heavenly Father who is the sort of father you're longing for. But in the meantime, let's build up the men in our lives by helping them to see that they role they play in the lives of their children has infinite value. 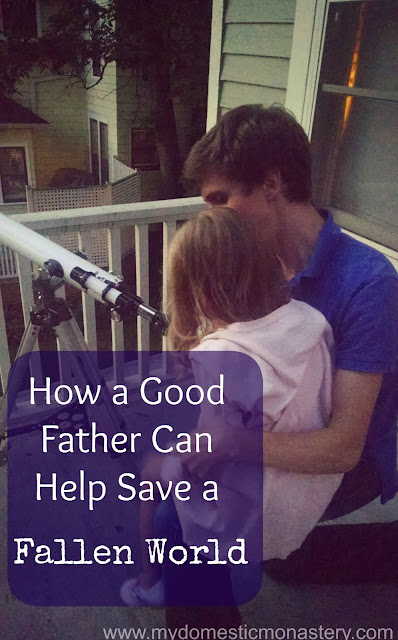