On Finding the Monastic in Toddlerhood


It's been a while since I've reflected on the link between the monastic vocation and my own, but sometimes there are little moments that bring it back to me. My vocation is to find my path to holiness in the small, little, unexpected, and (often) frustrating moments. Having a toddler in my life is bringing this reality to the fore for me. 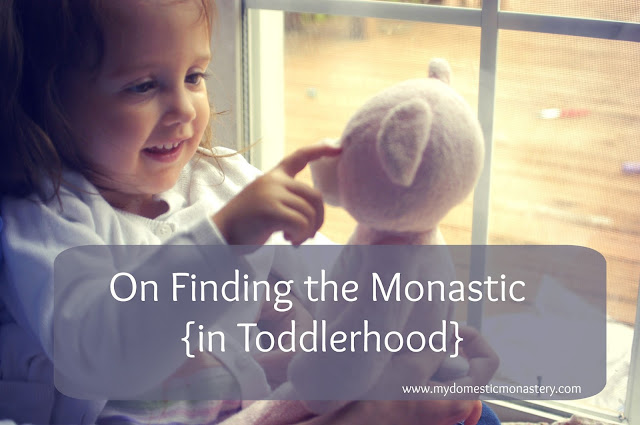 The other day, we were invited to dinner at our friends' house (a fellow professor from the seminary where Andrew teaches). They live in our neighborhood, but it had been pouring rain all day, and we were running late, so we decided to drive instead of walk.

Maria (who turns two years old next month!) was clearly overwhelmed the second she walked in the door. There were tons of other little kids visiting for dinner (which meant that our oldest daughter was delighted, of course), and plenty of adults milling around, too. Andrew and Therese and I were all enjoying ourselves, but - bless her heart - Maria just kept letting out that little shriek that means that she's getting overwhelmed.

We made it through pre-dinner and dinner, but as dinner was wrapping up, Maria was very clearly "done." She was rubbing her little eyes, fussing like crazy, and just not knowing what to do with herself. I talked it over with Andrew, and we decided that it would be best for me to just leave a little earlier with Maria, and get her ready for bed.

It wasn't raining at the time, so it would be fine for us to just walk home. It was a short walk, and Maria and I had left dinner parties early before. But...we had forgotten to pack a stroller in the car. And Maria is pretty heavy (although, like I said, it was a short walk home and I probably could have just carried her if I had needed to).

So, I said my good-byes, scooped up my girl, and we headed out. She wanted "dow!" (down), of course. So, I set her down. And we walked together, hand in hand. She kept stopping to show me all of her favorite things; "Puh-ul!" (puddle), "Tee!" (tree), "Rah!" (rock), and a lot of eager gesturing and noises to try to point out cars, grass, etc. etc. She was having a blast!

Normally, I would have rushed her along. When I'm walking with her and her sister, it's hard to slow things down to toddler pace. But that night, it was just the two of us. She'd been feeling overwhelmed, and I thought I nice, slow walk (during which she got to talk to Mommy) would be just the ticket.

It was such a beautiful walk. She walked almost the whole way home (around half a mile...pretty good for a little girl who only started walking less than two months ago and who needs to wear orthodics!), only needing to be picked up to cross busy streets and when the hills got too steep to navigate. As I was walking, I was remembering all the time that Therese and I used to spend alone together, when she was Maria's age. Maria and I used to have hours of alone, snuggle time every day, when she used to nap in arms. Recently, she started napping in her crib, and so we haven't had much alone time lately. She and I both love her sister, but there's something about that almost two year old age that just demands more attention than usual. For Maria, this is multiplied by her frustration with learning to communicate , something that is more of a challenge for her. She appreciates it a lot when I slow down to really listen to her.

I am not a slow person, though. I tend to rush through things, to try to get as much done as possible, in the shortest amount of time as possible. God works in little moments - little, quiet, slow moments, and I'm often too rushed to hear the (relative) silence.

But then, there's this toddler that God has sent me. She's little, she's slow, and she needs me not to rush so much. I hate having to slow down...but I love her. Being her mother is forcing me to grow in ways I don't want to, but definitely need to.

I'm always amazed by the quiet, contemplative nature of the monastic vocation, but sometimes I've even more amazed by the ways that God brings that monastic nature into my own (often noisy) vocation. I am so grateful.

Oh! And what we wore Sunday (well, actually to the Sunday Vigil Mass). 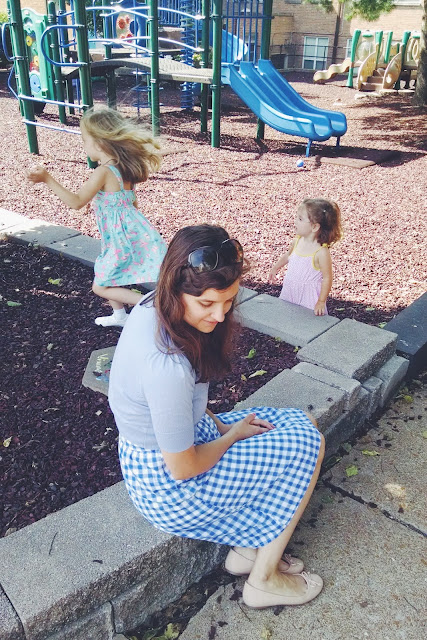 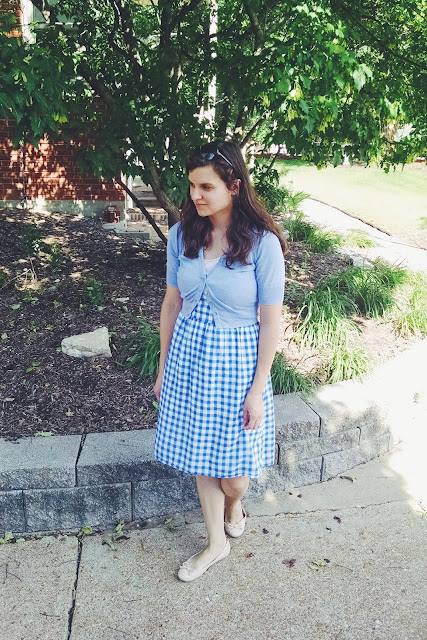