Heretics or No, Best Not to Shout It From the Rooftops

Linking up with Fine Linen and Purple!

By now you've probably heard the sad news about a family I've raved about here previously. I'm not going to discuss the situation, but I hope you'll join me in praying for everyone involved, because it's just so very sad.

What I do want to respond to today is a post I found linked to on Facebook yesterday: Friendly Reminder to Catholics - The Duggars Are Not Your Friends. 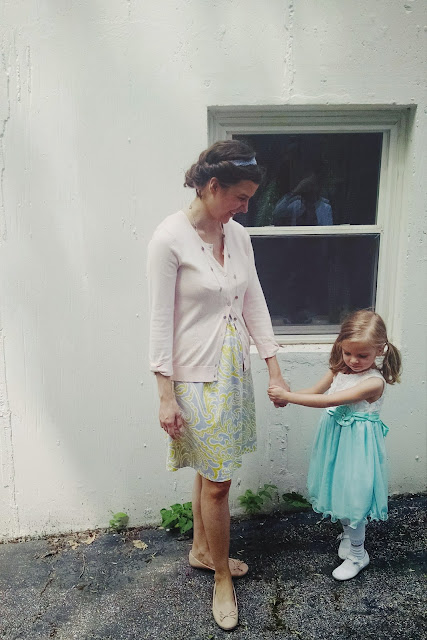 I fully get the point of this post. I really do. Yes, the religious beliefs of the Duggars are fundamentally missing something important. They are sorely lacking when they come to a healthy view of human sexuality, as is much of the Protestant Fundamentalist chastity movement (although, I'm sure not all). For more reflections on that, Jenny's post is another fantastic one to read.

But what I wanted to talk to you about today is the title of that first post and what it implies. I have to tell you two stories first, to kind of illustrate what I'm getting at.

First story is kind of more than a story, but a life experience. I went to a Catholic school from Kindergarten through 8th grade, and then for undergraduate and graduate school. I am immensely grateful for all those beautiful years of education. Immensely. But I also went to a public high school (albeit in a very small town, but it was a public high school nonetheless, with all that implies). And I am equally immensely grateful for my time spent there. Not only did I receive a top notch education (it was one of the best schools in the area we lived in) but I also grew immensely in my faith in my years in a public school.

Prior to high school, I lived mainly in a Catholic bubble. That wasn't all together a bad thing, and even within that Catholic bubble I was still exposed to a microcosm of the culture at large. I watched good friends go through their parents getting divorced, and I had good friends with siblings with special needs, and my very best friends were from a diverse background both racially and culturally. Those are just a few examples, but suffice it to say, I think that the parish we belonged to was somewhat representative of the diversity of the Church itself. But still- very much representative of the Church, not of the country. It was still a very safe, sheltered environment. 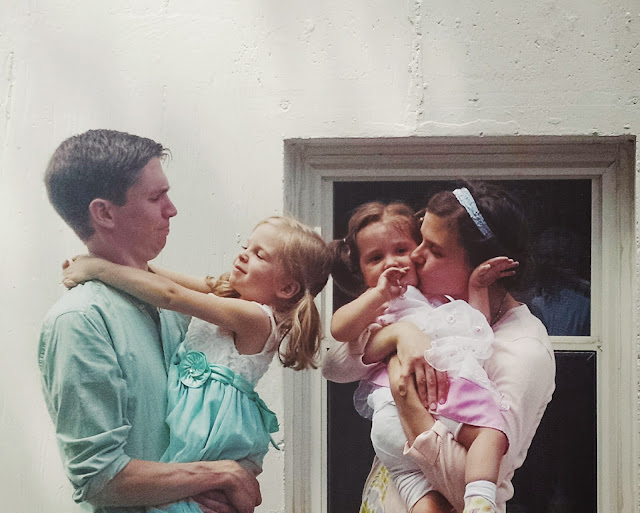 I think that having that more sheltered time in my life was incredibly good. It showed me what things can and should look like, which was really helpful when I went into a public school where most people did not have a background identical to mine. For example, a number of my dearest high school friends went on to have their first child before getting married. Others would definitely not be defenders of traditional marriage, and one of my very best guy friends was a professed athiest. Having been raised as I was made me feel not threatened by any of this. I knew what my beliefs were, and I was more than confident defending them. (I have a distinct memory of a Calculus class where we were supposed to be working on an assignment or a test or something with our substitute teacher, and it rapidly turned into an all out debate on Catholicism with a good Protestant friend of mine, while the whole class listened in.)

I didn't find the beliefs of others threatening, but I also didn't accept their beliefs. I wanted to change their minds and hearts, but I wanted to do so out of love (and probably some stubborn desire to want to be right). As my dad once zealously told a Jehovah's Witness who came to our door (and subsequently terrified her), "I want to share with you the fullnes of the Catholic faith!" 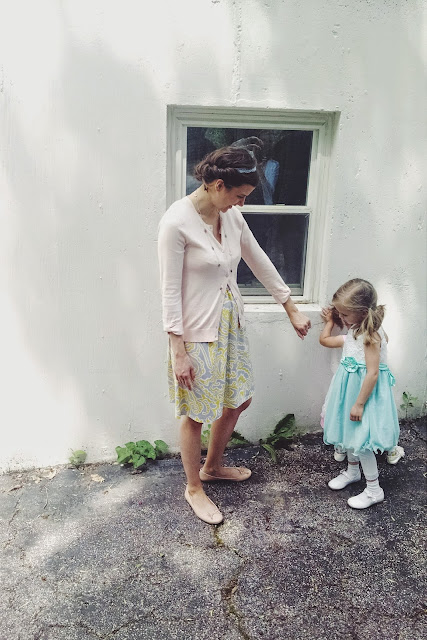 But those debates were only possible because those guys and girls were already my friends. I genuinely enjoyed being with them, and we searched for common ground in our faith, too. If I overlook the typical crazy and awkward moments of high school, I can admit to you that I look back on those high school years fondly. I wouldn't want to relive them (who wants to relive high school?) but I'm grateful that my parents sent me to the school that they did.

Now fast forward almost ten years later - married (to a fellow theologian, no less), with two children, living in a completely different part of the country. By now, I've earned both a bachelor's and a master's degree in theology, been trained as a catechetical leader, and even written a few Catholic books. I'm married to a man who is working on his doctoral degree in theology and is teaching at a Roman Catholic seminary.

And, lo and behold, a Jehovah's Witness knocks at our door. 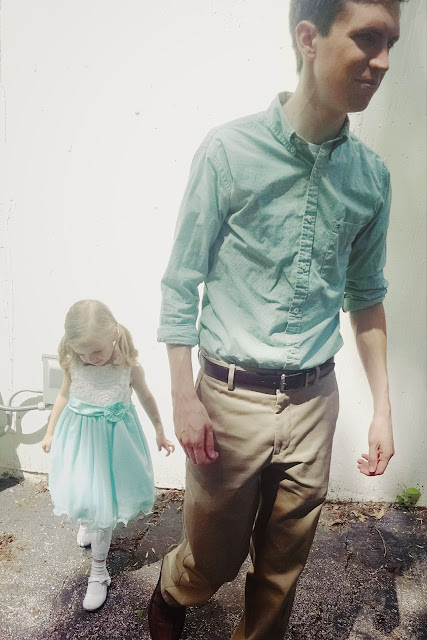 I searched the archives and I can't believe I didn't share this experience with you, yet!

So, Andrew was working from home that morning, and an older Jehovah's Witness knocks on our door, and I drag Andrew out of his office to answer it. He goes to the door, and kindly takes the guy's pamphlet, and is about to let him go when I pipe in, "Oh, he [pointing to Andrew] is actually working on his Ph.D in theology!"

The man's face lights up, "Oh, yeah? Where?" Andrew is in the middle of answering him when I jump back in with, "Oh, and he's also teaching Greek up at [the name of the Roman Catholic] seminary!"

The guy's smile froze. "Ohhhh. Really. So you guys are...Catholic?"

As if the icon wall behind us wasn't a dead giveaway. ;-) 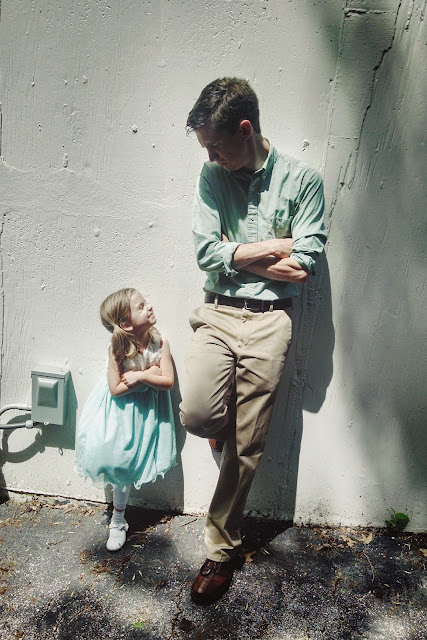 So, suddenly, he was very interested in talking. He admitted that he "used to be Catholic." Andrew, bless his heart, led with, "Soooo...you guys basically believe in the Arian heresy, right?" which is absolutely true, but probably not the best conversation opener. This man ripped in to Catholicism with some of the usual (and some unusual) arguments. But honestly, we weren't making much progress.

Then, Andrew changed his tactic, "So, can I ask you why you left the Church?"

When we changed it to a personal note, this older man became uncomfortable. He shared some of the usual reasons - being bored at Mass and feeling like he "wasn't getting anything out of it", being one of the reasons. (To which we replied, "But...what about the Eucharist???!" and probably scared him with our enthusiasm.) But basically, we tried to make our love for the faith and our care for him as evident as possible. 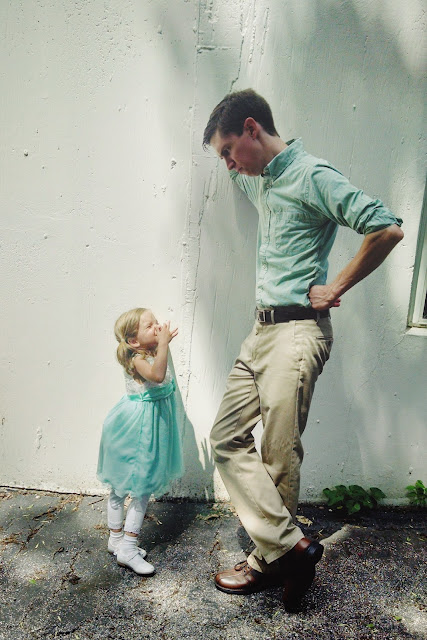 When the conversation ended, he asked if he could come back, and we gave him a definite yes. When we closed the door, I expected to feel triumphant (defending the faith for the win!) but instead I felt incredibly sad. I felt like crying, knowing that this man wasn't "home." (Of course, this instance is even sadder than a Protestant/Catholic deal, because a lot of this man's new "beliefs" were way off from mainstream Christianity.) But I felt so sad, and I continue to pray for him, that he may find his way back home to the Church.

And that's how I've felt about the Duggars, and many others, for a long, long time. I wouldn't say "they aren't our friends" even if those like them (and maybe even them?) bash Catholics or believe fallacies about us. I don't view that as a threat. I just view it with an aching heart, because even though we are one in Baptism, we are not one in creed. And that makes me sad. It makes me especially sad that they don't have the Eucharist. Honestly, if we're talking about a faith without the Eucharist, how could I possibly feel anything but incredibly sad for them. We receive Christ's flesh inside of us! How could we not desperately hope and pray that others might be able to, as well?

With all my heart, I long for the day that, "They may all be one, as [Christ] and the Father are one."

I feel as if I have the most precious treasure in the world, in my Catholic faith. When people attack that faith, of course I feel defensive, but I mainly just feel sad for them. And I wish I could lead them home. I wish they could go through life with the support of the Sacraments, with the guidance of the total fullness of the truth. I fully acknowledge that there is goodness and truth in any denomination of Christianity - much of it, actually. But I think that there is a fullness in our faith that is not present in every faith. If I didn't believe that, I wouldn't bother being Catholic.

So, it with love that I view those who don't share my beliefs. It with a genuine aching in my heart that I wish that they were Catholic. From the time that I was small, I've felt that way. I remember when I was very small, my parents used to put on the Crystal Cathedral before we went to Mass on Sunday mornings, and I remember assuming that they did the Liturgy of the Eucharist after the cameras turned off. I didn't realize that they didn't have the Liturgy of the Eucharist at their church, until my dad explained it to me. Then I felt very confused, and very sad.

(As a side note, I just about burst with joy when I found out that the Crystal Cathedral was going to be converted in to a Catholic Church. I am not exaggerating when I say that it was a childhood dream come true.)

So, when we look at the Duggars (or anyone with a different or no faith) I hope that we can view them as friends - friends desperately in need of our love and prayers. Friends who we love but who we long for the grace of conversion for. Not because they are "heretics" (even if and when there is truth to that statement) or because we are right and they are wrong - but because we love them enough to want them to know the fullness of goodness in Christ, a goodness that He gifted to the Church born in that upper room on Pentecost. Love does not mean that we "accept them and their choices" - it means we want the best for them, and that what's best for them is not always what "feels" best.

And on a light note...the first episode of The Little House Mothering podcast is up! Go have a listen! And leave a comment (or review on iTunes) and tell us what you think! 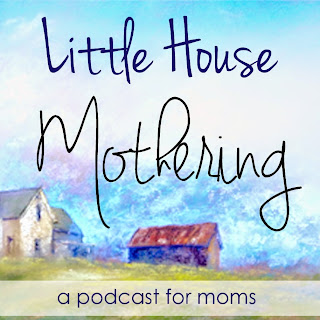