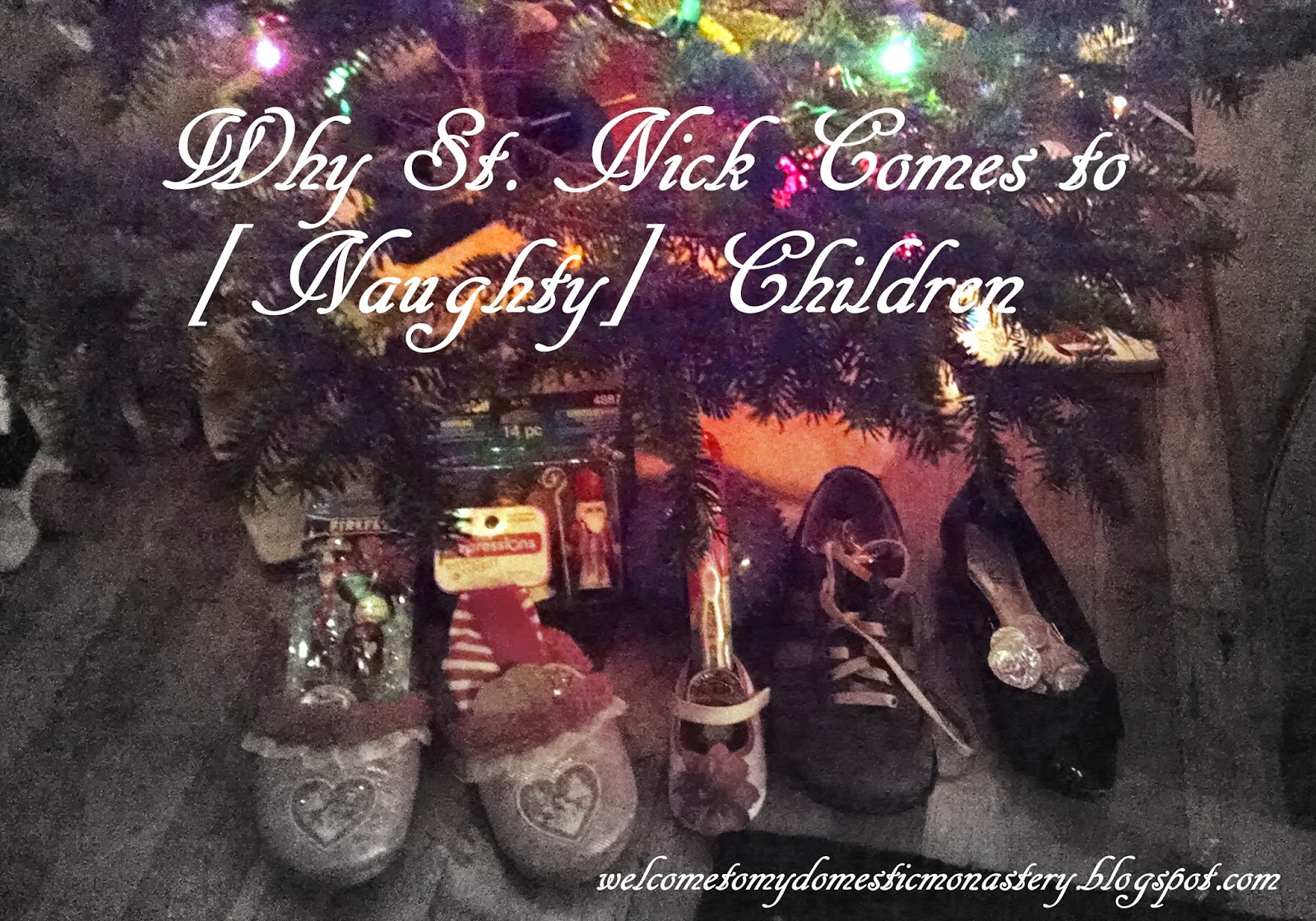 The other night, I did that thing I'd never thought I'd do. I pulled the Santa card.

We went to Advent Vespers and dinner at the school where Andrew is working on his ph.D. It was such a fun night, and the community is so great. There were also a ton of other children there, and Therese was pretty much in heaven. They were all running around and playing, and having a blast.

We got home way past bedtime, and the girls were exhausted. For Maria, that translated to almost dozing off while she nursed. For Therese, that translated into total meltdown mode. I'm sure you know what I'm talking about. The poor girl was beyond exhausted, and I knew that. I should have just helped her get in her pjs and given her a cuddle to help her calm down. What did I do instead? I threatened that St. Nicholas wasn't going to come that night (it was the night before his feastday) if she didn't stop yelling.

I know. I was that parent. I was the mean parent who threatened that Santa wouldn't come if she didn't shape up.

But here's the thing - she was way overtired, and I knew that. Therese is not a nasty kid. She is not disrespectful. She isn't disobedient. She has her moments, like we all do, but ultimately she is a really good daughter. Instead of taking that in to account, I got really impatient with her. I lost my cool. And I dragged St. Nicholas into the fray along with me.

The next morning, Therese was the first one up. St. Nicholas had showed up, after all! And he had brought her a number of goodies, including a Spiderman toothbrush!!! Seeing her joy, her innocence, I felt so bad about how I'd responded the night before.

The longer I'm a parent, the more I realize just how far I have to go on the path to holiness. I struggle so much with patience. St. Nicholas, a saint in heaven, knows what I don't know. He knows that God is loving and merciful to me, even when I don't deserve it. God doesn't withhold that love, even when we think He should. I was reminded of this passage from G.K. Chesterton:

"As a child I was faced with a phenomenon requiring explanation. I hung up at the end of my bed an empty stocking, which in the morning became a full stocking. I had done nothing to produce the things that filled it. I had not worked for them, or made them or helped to make them. I had not even been good – far from it." Click here to read the rest.

I have plans for Christmas gifts this year, and I'm sure that St. Nicholas will bring a few gifts to our family. But here's the thing - no gift that I have to give can compare to that very first Christmas gift. No gift can compare to the gift of that sweet baby boy, born so long ago. No gift of mine even remotely compares to the value of that gift. And let's be honest - as unworthy as I may think someone may be of one of my gifts, no one can be as unworthy as I am of the first Christmas gift.

So, regardless of the behavior in our house in the upcoming weeks, you can bet that St. Nicholas will visit our family. He knows we (especially that mama of the family) still have a lot to learn about the love and generosity of the Christ child.