Linking up with Auntie Leila and family. Congratulations to her daughter on her beautiful baby boy!!!

So, last week, I celebrated a birthday. I went from this... 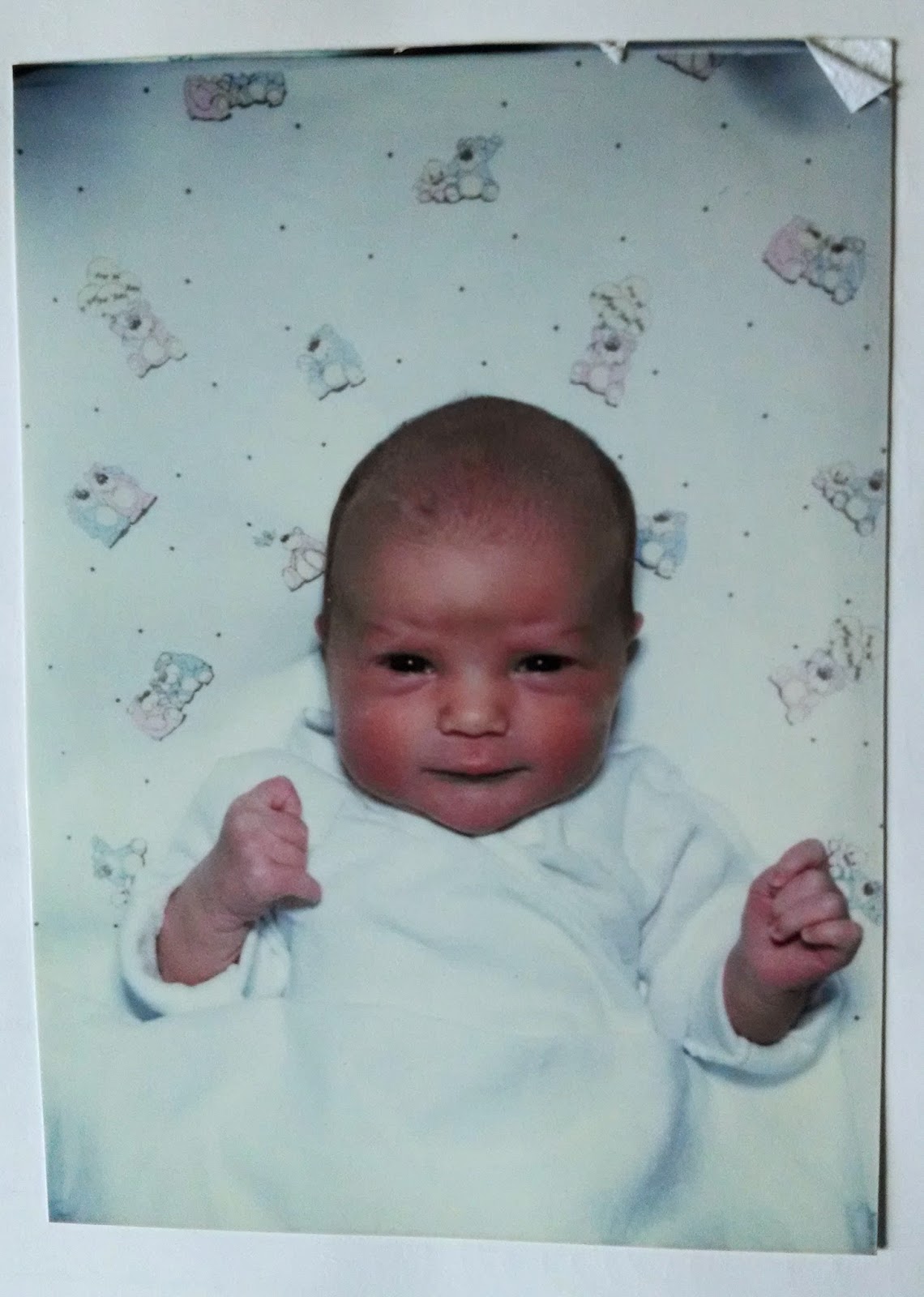 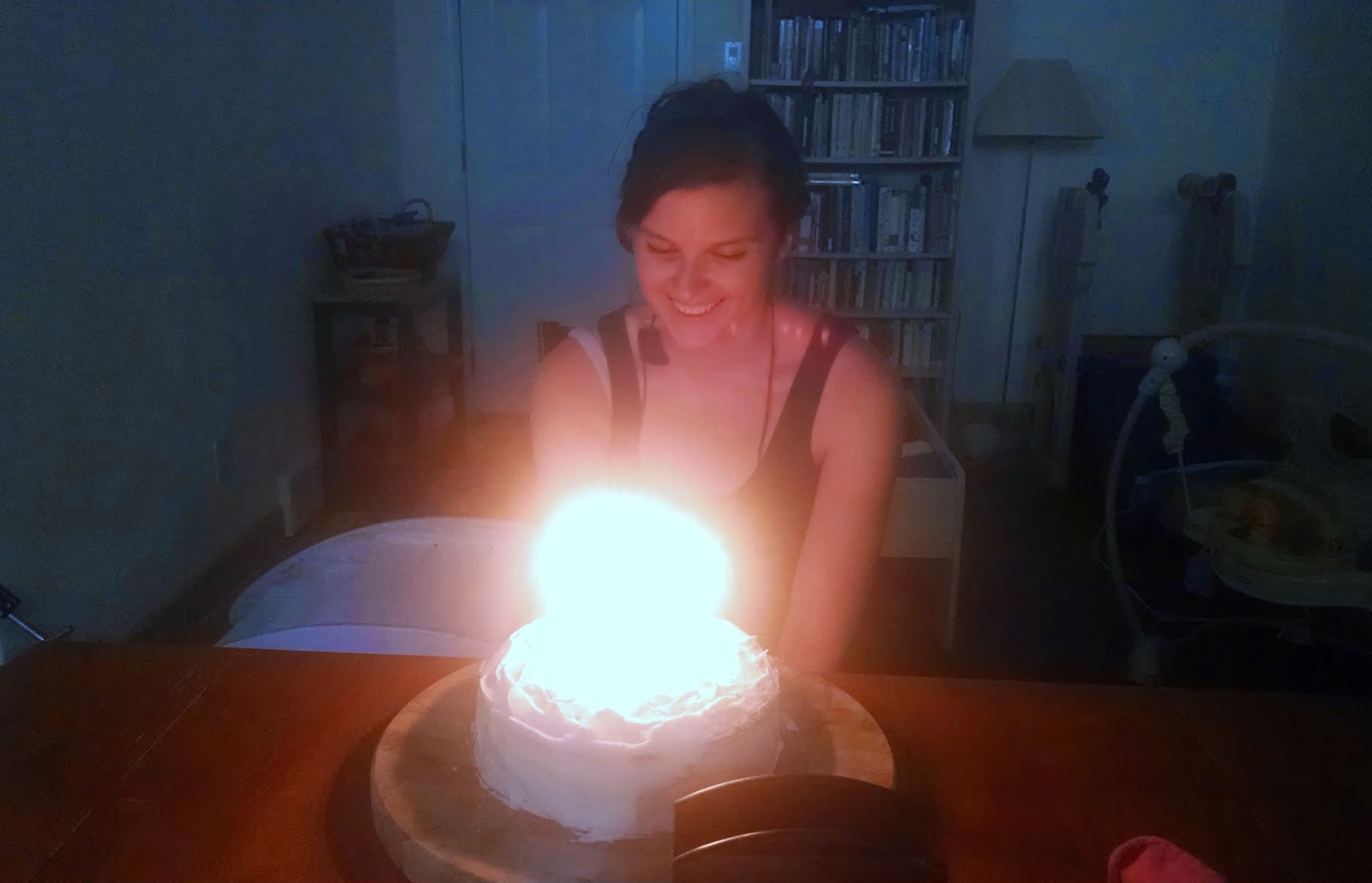 And it only took 28 years for the makeover to be complete! I'm happy to announce that I have a full head of hair and unclenched fists these days. ;-)

(Cake made by Andrew. He's the baker in the family!!!)

But it wasn't just my birthday...it was my twin sister's birthday, too!!

When going to storytimes, lactation support groups, etc. I occasionally run in to a mom of twins. Whenever I do, I can't help but gush over her littles and tell her that I, too, am a twin. Immediately, she'll follow with a flurry of questions, "Are you still close to your twin? Does your twin live nearby?" They look at their little twins and listen to me, and you can see the wheels turning in their heads, Will my twins turn out okay? Will being a twin turn out to be a good thing for them, or will it cause them problems? Will they be deprived because they have to share parents -and everything else - from the start?

So, parents of twins, I'm here to tell you - your twins are going to be just fine. In fact, they may be better people because they are twins. Here are just a few ways that my twin sister has saved me from the less nice parts of myself and helped me to be the person that I am today.

{pretty}
She taught me, from the beginning, how to love someone else. 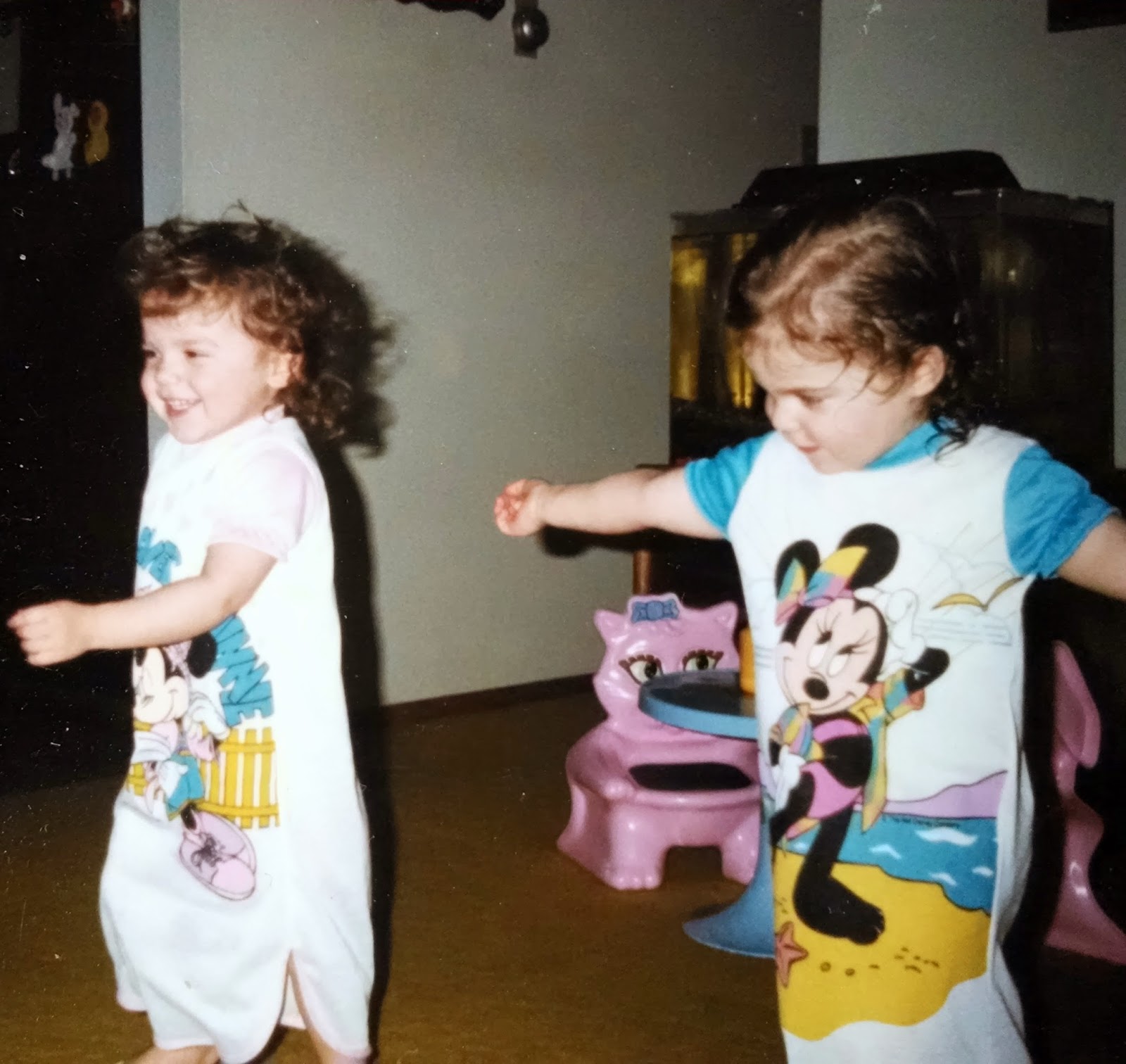 I've never known life as an only child. You'd think that I would have grown up feeling starved for attention and terribly deprived. But I didn't. I think having a twin is a bit akin to the kind of love you have for your children. It is instinctual. Yes, you argue and often have to choose to love the other person (especially when she borrows your clothes and gets a stain on them - sorry for the times I did that, Francesca!). But deep down, in a way that makes up who you are because it began in the womb - you love your twin. There is a part of you that knows them, and a part of them that knows you, that is unlike any relationship. And this relationship causes your heart to expand. Instead of feeling entitled to your own space - you don't want to be alone. Twins typically sleep easier as babies when they're side by side. The well-known family lore says that when we were close to being born, I grabbed on to my sister. I wrapped my arms around her, afraid and not wanting to lose her. (This caused my mom's water to break and her to have to have an emergency c-section. Whoops. Sorry, Mom!) But that kind of loving need to reach out to another person - it's stuck with me. The same is true for my sister, too. Both of us have grown up with a sense of compassion that I think stems directly from being twins. We've always been aware of someone other than ourselves. We've always loved someone other than ourselves.

{happy}
She taught me what it is to have a friend and be a friend. 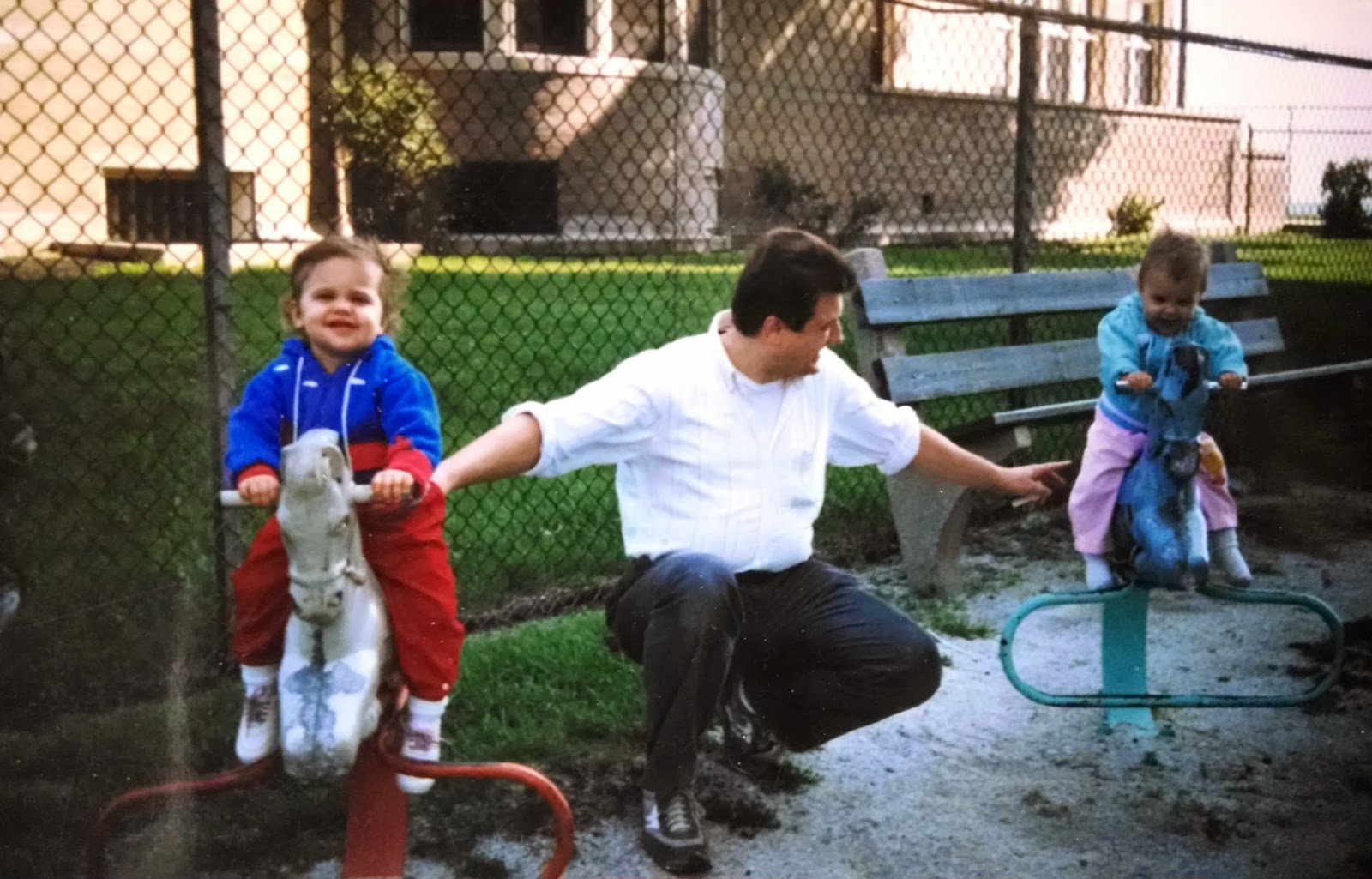 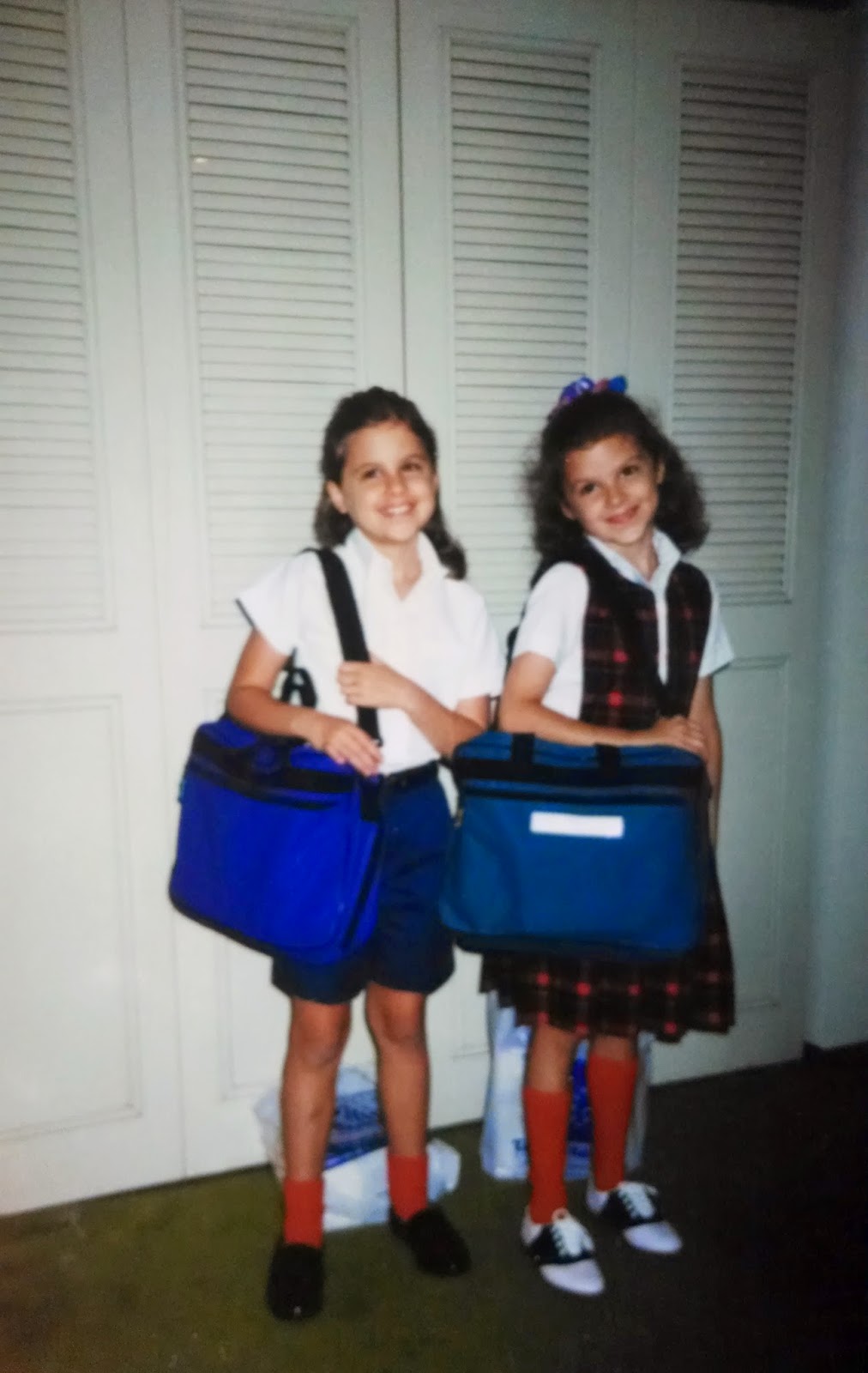 At some point (before or shortly after my second daughter was born) I was talking to my mom about my firstborn and the fact that she wishes that we'd had more chances for one-on-one time like I had with my daughter (since my girl was an only child for almost three years). I was quick to reassure her that I often worried about Therese being alone, and that I didn't feel at all deprived as a child! I remember from the time she was a newborn, looking at her and thinking, She's all alone. I mean, she has Andrew and me but she doesn't have another baby to lie beside her. She doesn't have someone to keep her company. When she was little, I would often try to play with her, take her to the park, take her to playdates, trying to make sure she wasn't lonely. I don't ever remember being lonely when I was a young child. I was born with a best friend, a friend that I've now had for almost 29 years.

But our friendship hasn't always been all sunshine and roses. It's been a real friendship, with all the ups and downs that go with that. We've been friends for almost three decades, and have literally known each other since the beginning of our lives. We've been through a lot together - through growing pains, boyfriends come and gone, college woes and triumphs, first jobs, and a marriage and children added in to the mix. We've shared our first steps, our first words, our first books...everything. And you better believe that we didn't always see eye-to-eye, didn't always want to share our space with another person, didn't always want our sister to have the boyfriend/friend that she had in her life. But my twin sister is the person who taught me how important it is to resolve arguments. She taught how important it is to keep loving, even in the face of discord. And that pattern of disagreement and resolution is one that I've carried with me throughout life, even in to my marriage! She's taught me that real love - choosing to love - can stand the test of time.

{funny}
She taught me that it's okay to stand out and to stand together. 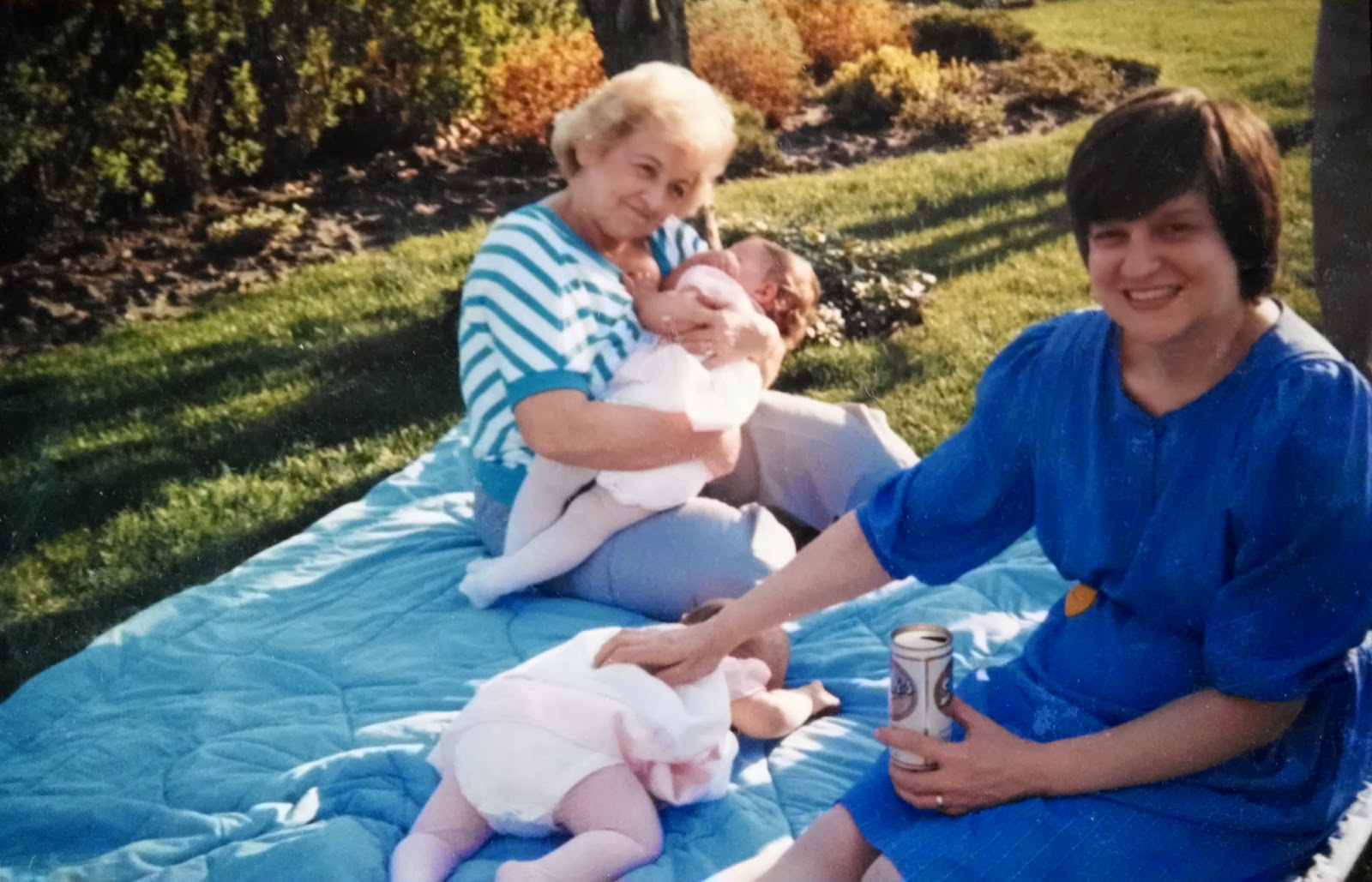 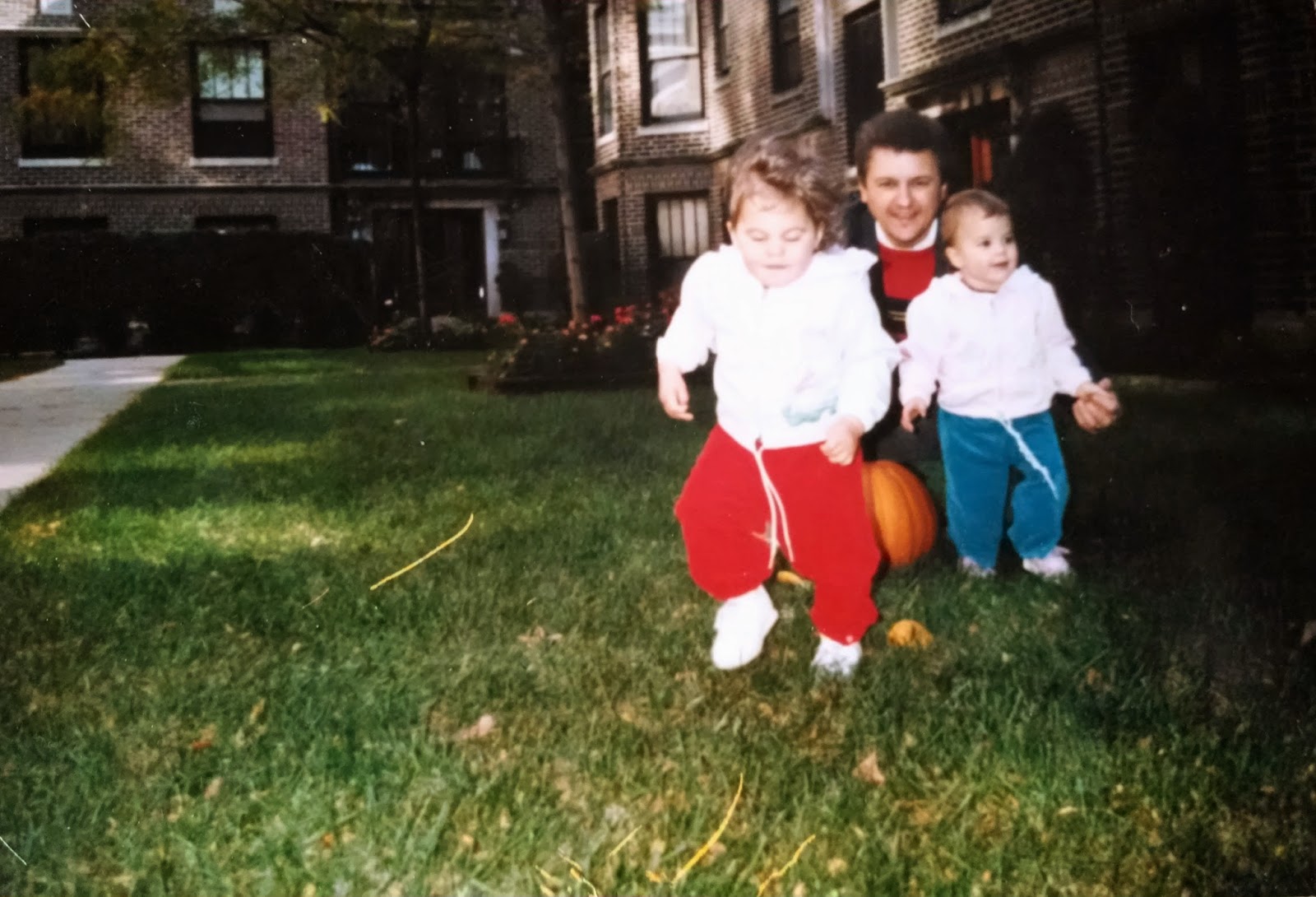 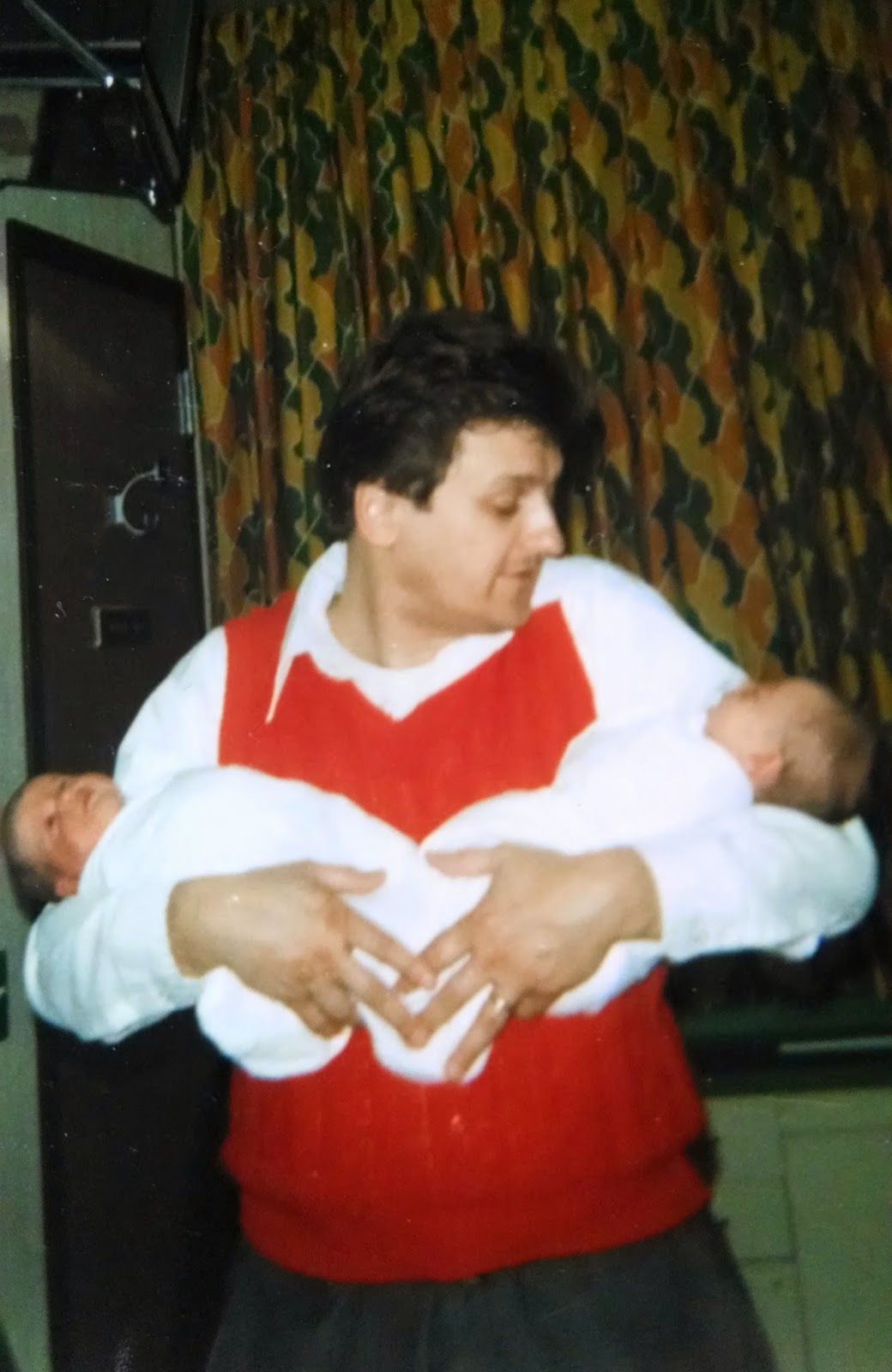 When you are a twin, you stick out from the get-go. People can't help noticing a double stroller with two tiny babies in it, and cooing over them. My mom actually used to be nervous taking us out for strolls in Chicago (where we lived as babies) because so many people would stop her to look at us!

Throughout childhood, we were often stopped or given extra (sometimes unwanted) attention because we were twins. I'm not going to lie - sometimes that was really hard. Sometimes we just wanted to blend in with everyone else, not be treated differently because we had a twin. (And we weren't even identical twins!!) But, I think that ultimately, it helped us to realize something - life isn't about fitting in. Yes, it was hard to not always have a niche, to not be able to slip under the radar as easily as everyone else - but it also meant that we knew, from the get-go that there was something special about us. We didn't have to fit in to be special. And honestly? I have yet to meet a kid who doesn't know what it feels like to not fit in. It pains me when my social preschooler tries to make friends on the playground and will occasionally come up against a very anti-social little kid who isn't nice to her. I get it. I know what that feels like. But do you know what helps you when you have a twin? You know that, ultimately, there is one friend you have who knows you through and through - and thinks that you're pretty special. And that makes you less afraid to stand out.

On the flipside, having a twin has also made me learn the importance of sticking together. We had some rough patches growing up, where kids would automatically exclude us because we were twins. They weren't trying to be mean, but they just assumed that we would be content to go off on our own, as our own neat little package. It was so frustrating for both of us! Of course, this doesn't mean that we never had friends, but it meant that some kids didn't choose us as friends simply because they figured we were satisfied with our twin. (For the records, twins may be best friends, but that doesn't mean that they don't like having any other friends in their lives! They do!) When we were older, we talked about those experiences and learned a valuable lesson...we should have just stuck together! Those people in elementary school who made us feel left out...we're not friends with them anymore. But each other? You better believe that we're still friends with each other!! And we should have sweated those petty relationships less and stood together more!!! We've kept this in mind now, as adult sisters. Our relationship is irreplaceable.

(Side note: high school was a different ball game. Instead of being treated as "other" for being twins, we were treated as being automatically "cool" for being twins. So don't assume that your twins will have the same ups and downs we did! We had some lovely friends growing up!)

(Also side note: if you haven't heard of it yet...please consider taking your twins to The Twins Festival! We went when we were thirteen and it really strengthened our relationship and helped us to "own" being twins. As thirteen year olds it was amazing to feel like we fit in with so many other people!)

{real}
She taught me that life is not just about you, and you cannot go through life alone. 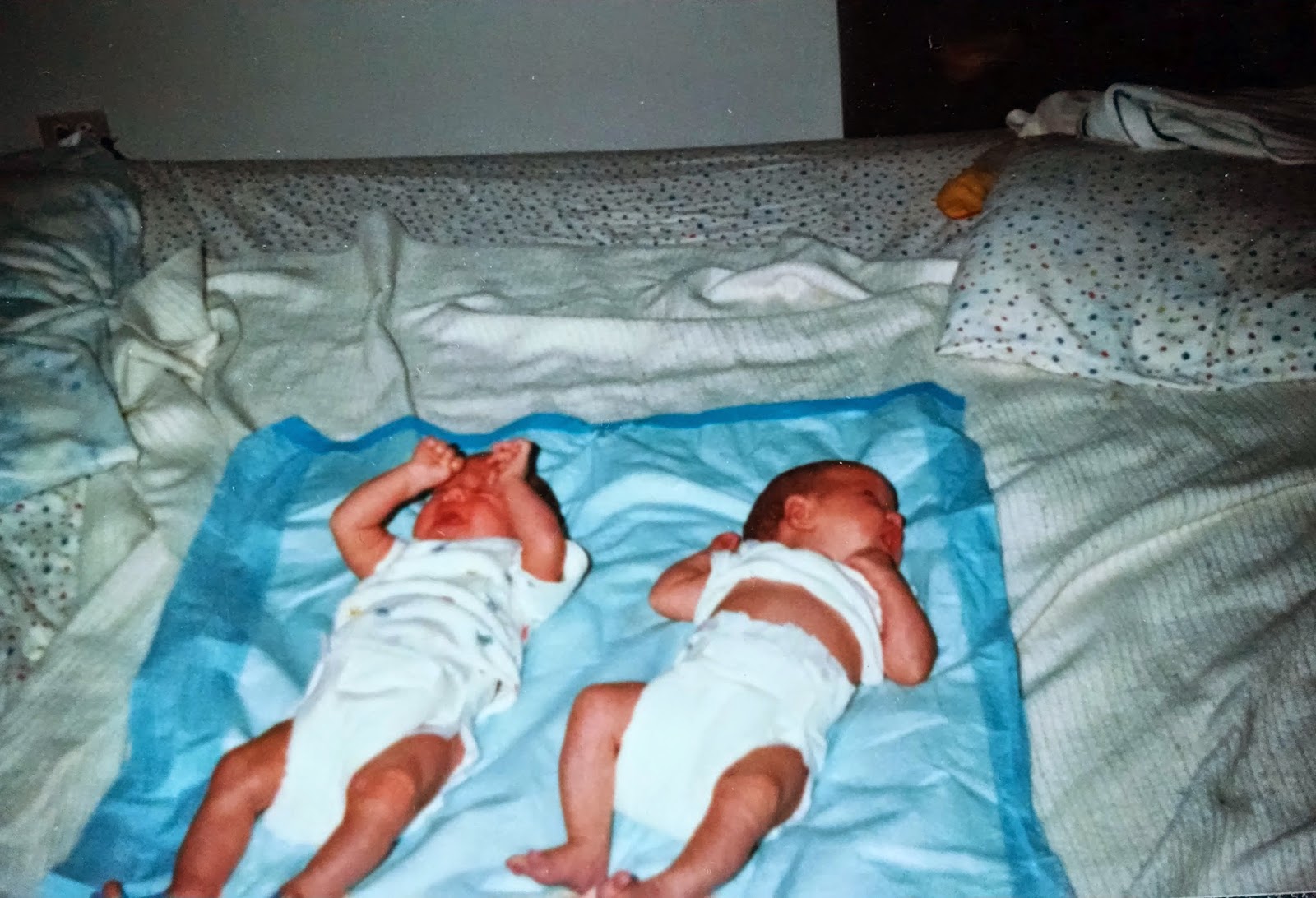 Let's be honest...Francesca started teaching me this lesson and then she handed off the baton to Andrew and the girls...so I have all four of them to thank!

Twins learn, pretty early on, what it is to share. That doesn't mean that they're always good at it...but it does mean that they need to accept it as part of life from the get go. Poor things, you may say. But, I think that it would be much harder to not have sharing be a part of your life from the get go and then have to learn it. I've watched my daughters undergo that process...and it looks much more painful that what I remember experiencing. I'm sure my mom has stories aplenty of us not wanting to share with each other, but I don't remember feeling the need to claim my own space as much as my daughters do at times. Having a twin - a fellow little person who you love more than anyone else in the world - is probably the gentlest way to learn the lesson that the world does not revolve around you. You know that. From the start. And you aren't traumatized by it. In fact, you feel kind of bad for the people who don't learn that from the start.

Growing up, I had heard of other kids going through phases when they wanted to be a twin. Recently, I encountered it firsthand, when I had this conversation with Therese,

Me: Guess whose birthday is coming up!
T: Mommy!
Me: And Auntie! Because Mommy and Auntie were born on the exact same day! We share a birthday!
T: Who was born on the same day as me?
Me: Um, no one. Just you! But Mommy and Daddy were there with you.
T: But...but who shares my birthday?
Me: Um, probably other people have the same birthday as you. But you were the only baby who came out of Mommy's tummy on that day.
T: But I don't want to be the only one! I want to have the exact same birthday as someone else!

I didn't know how to tell her that that ship already sailed...

So, happy birthday to one of my best friends in the whole entire world! You are more precious to me than you'll ever know! Thank you for teaching me to be less selfish, more compassionate and forgiving, and more willing to love than I would have been without you. :-) 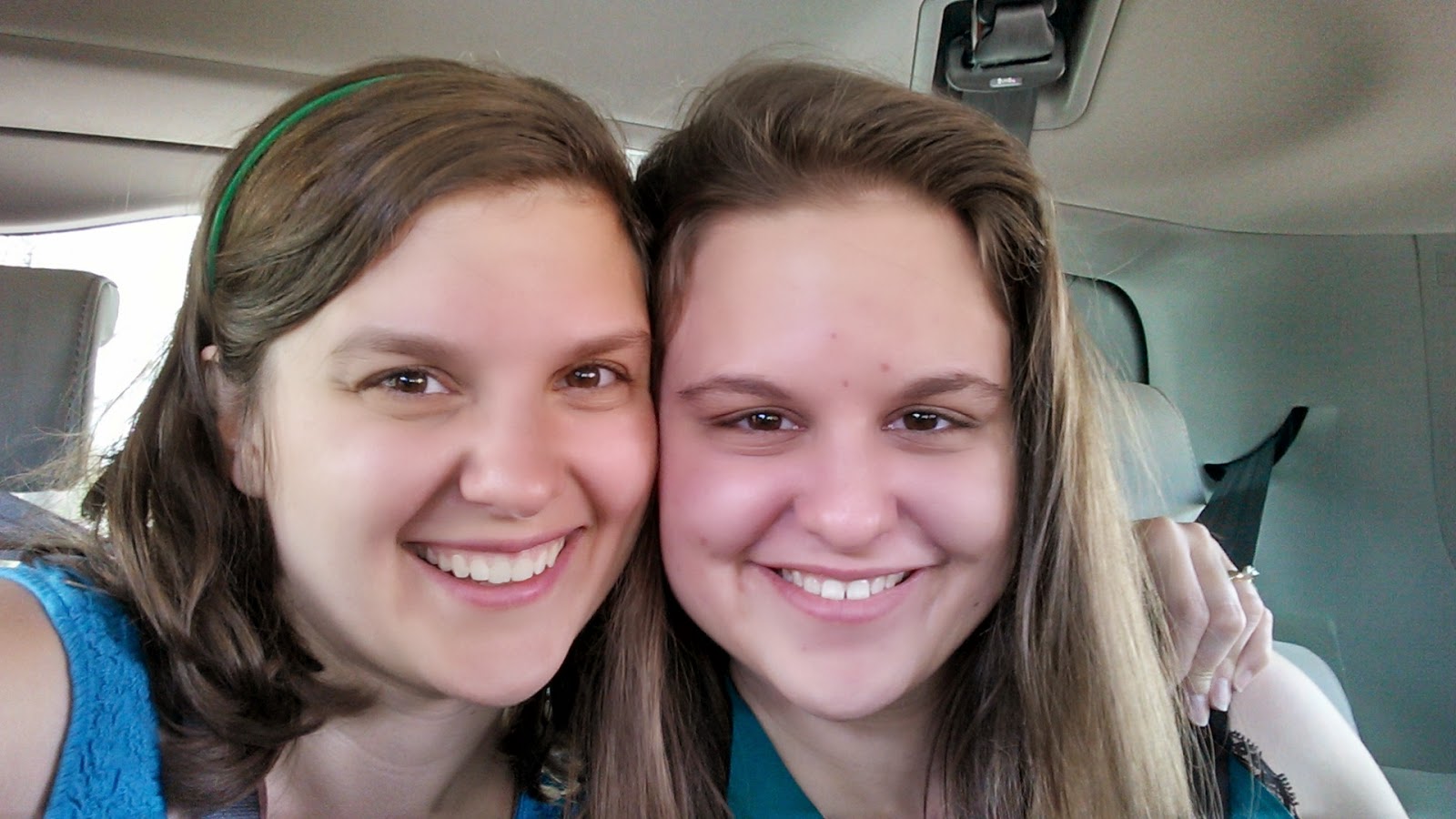 Moms (and dads) of twins...take a deep breath. Your twins will be fine. In fact they'll be more than fine. :-)