Raising Your Kids [The Catholic Way] - Taking Little Ones to Mass

Alternately titled, "What attitude is most constructive to have when taking little ones to Mass." By "little ones" I mean the preschool and under set. So my stinkers fit into that category, and I'm guessing you've got some that fit that description, too!

This is the third installment in the "Raising Your Kids [The Catholic Way]" series. For the first two installments, click the links below:

Raising Your Kids [The Catholic Way] - Praying for the Dead 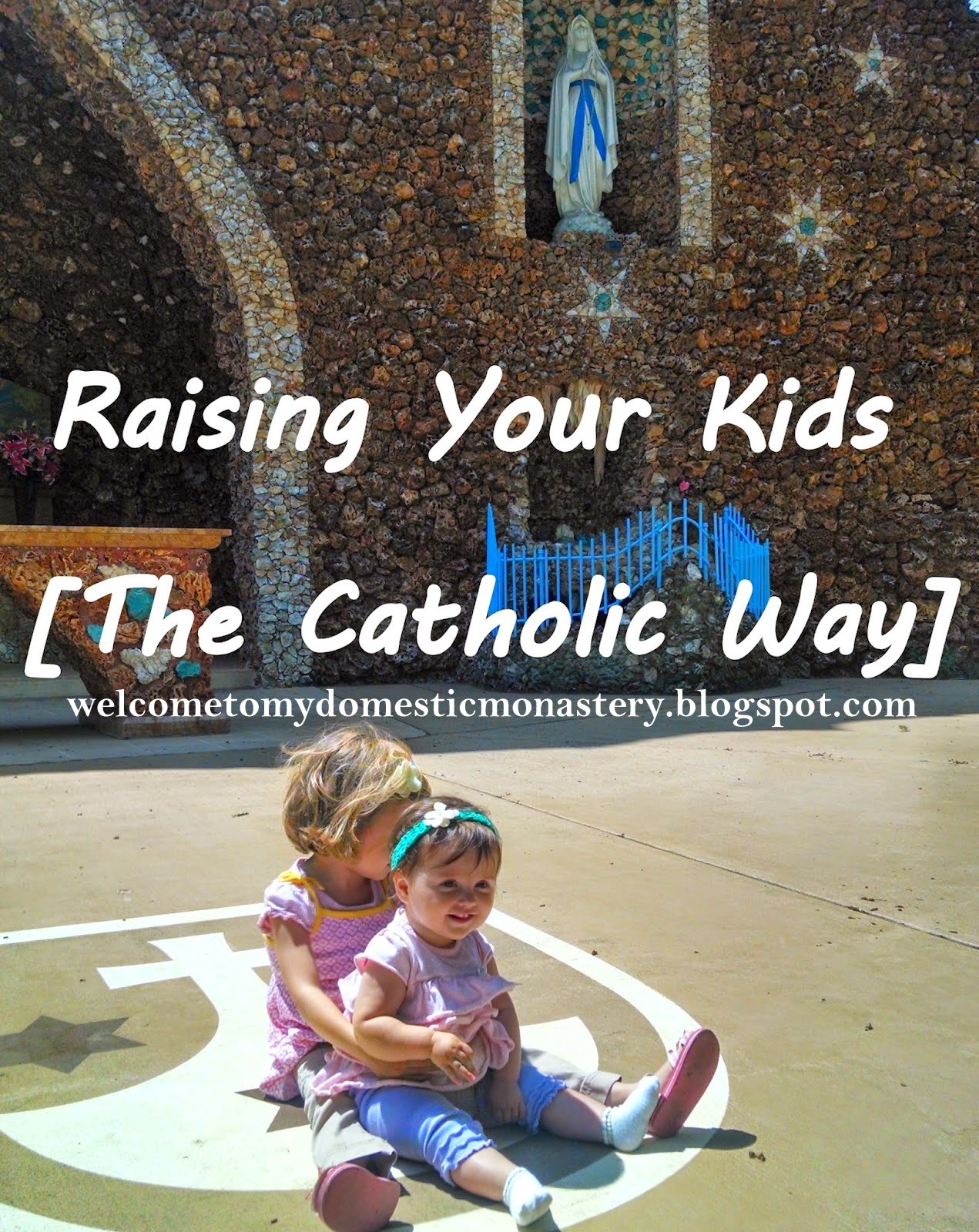 So, I joke with my friend and co-author Amy that we literally wrote the book on taking babies and toddlers to Mass. But can I let you in on a little secret? We're often just as clueless as you.

I think that, no matter how many children you have you're still a little bit clueless when it comes to...well, everything. Every child is so different and unique that no one set of rules fits them all. In the book, Amy and I give some helpful suggestions for tackling Mass with babies, toddlers, and young preschoolers, and that's definitely a start. But do you know what? No one set of rules can work for every child. Take my two, for example. Very similar in some ways (and subject to the same set of parenting rules and guidelines) but so different in other ways. Like, when it comes to swinging at the park.... 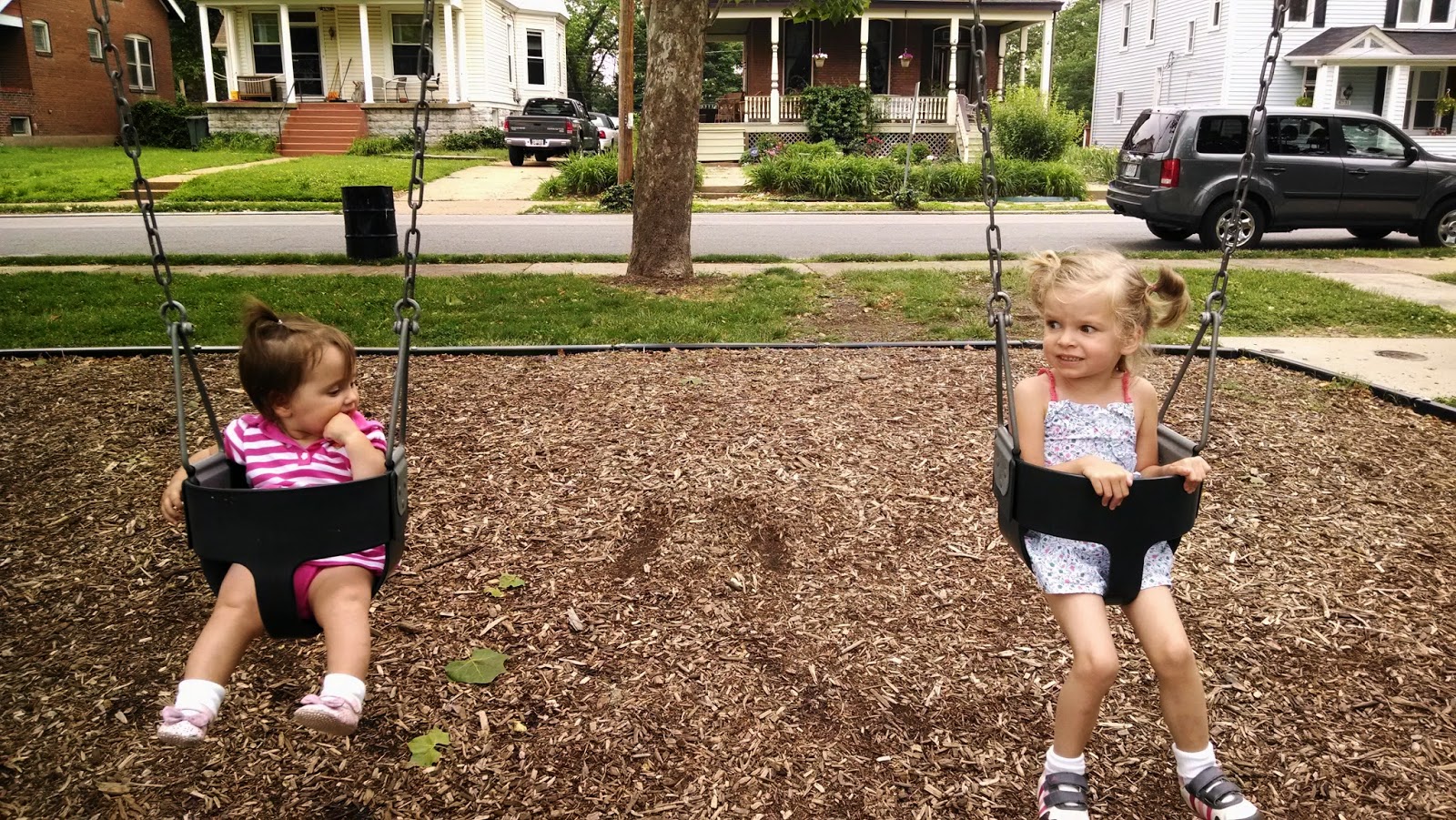 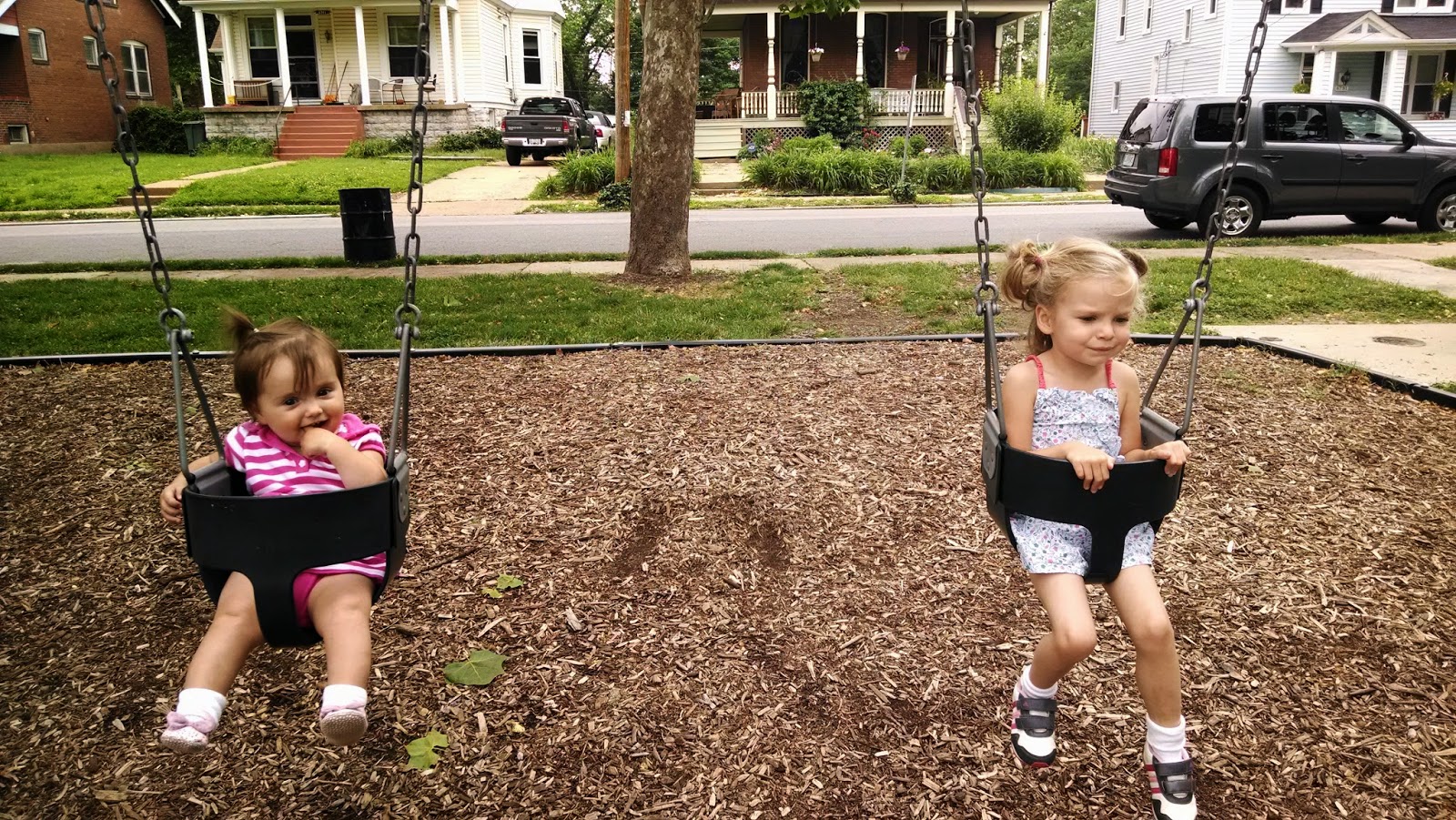 Therese lasted about a minute. Maria happily swung for an hour and would have stayed even longer.

So, I have to tell you that the kinds of suggestions you'll find in the book if you read it (and I hope you do!) are still worth mentioning. It is helpful to find quiet ways to occupy very young children with religious picture books (I highly recommend any of the St. Joseph picture books but don't get them from Amazon...get them from you're local Catholic bookstore for less than $2 each!), wooden baby rosaries, wooden saint dolls, etc. I also love the reminder to point out the things you're seeing around the church to your little ones - pointing out Jesus in the tabernacle ("Jee! Jee!" as Therese used to call him when she was a baby), pointing out pictures and statues of the saints, the Stations of the Cross, the holy water, candles, etc. etc. Ours is a very sensory faith!!

But the suggestion I have for you today is very different. It's less practical and more from the heart. It's also very simple. Are you ready? Love your faith. Love your children.

Or maybe, more appropriately, love on your children!

Firstly, though, your own love for your faith needs to shine through. So take whatever time you have to nurture your own faith life! That will look very different than it did for you before you had children, but that's okay! Try to remember what your favorite forms of prayer were prior to motherhood (or fatherhood) and do what you can to bring them back into your life. My favorite forms of prayer are daily Mass, praying with Jesus in the Eucharist (preferably in a quiet, empty church), and the Liturgy of the Hours. I do not practice those the way I used to, but my love of them is still there. So, I practice them how I can. Since I can't go to daily Mass every day, I subscribe to the daily readings in my inbox and try to catch the radio broadcast of the Mass at 11:00 every morning (we're often out running errands then, anyway). The city we now live in is lacking in many unlocked churches, sadly, but I have scoped out several adoration chapels and I take advantage of visiting a chapel whenever I'm near one (the girls' doctor's office is in a children's hospital that has a chapel with Jesus in the tabernacle). I try, try, try to go to Mass on Saturday mornings by myself and either stay to pray after Mass or hit up an adoration chapel later in the day. I try. It doesn't always happen. But I LOVE it when it does. It feeds my end-of-the-week weary soul.

I haven't been praying the Liturgy of the Hours lately...but now that I'm writing about it, I'm kind of itching to incorporate it again. If I can do nothing else, I've found Compline (night prayer) is short and easy, but still connects me to that lovely rhythm.

Andrew loves the rosary, so we pray a decade together as a family each night, in front of our "Little Oratory"... 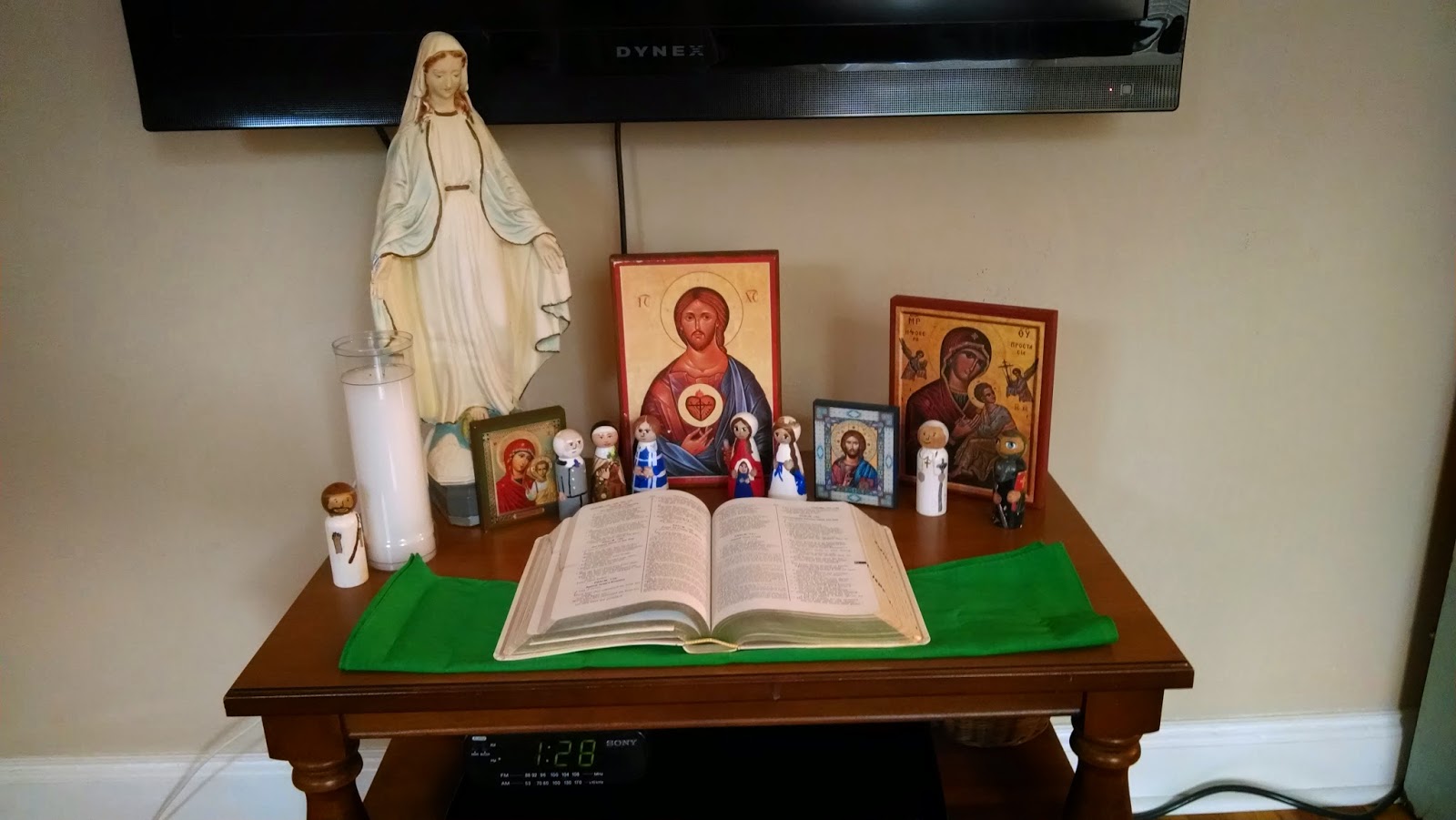 My point is that whatever the flavor of your relationship with God is, maintain that relationship! An excellent confessor in my life once recommended me to just take two minutes to pour our my heart to Jesus every day. I love that advice! It's so easy to get lost in the busyness of life, and it's also easy to get worries about saying the "right kind of prayer" but the most important thing is...pray! Even a little bit can make a big difference. Before you can help your children fall in love with Jesus, you need to allow yourself to fall in love with Him!!!

So, now, back to Mass. You're at Mass with your little ones, now...what can you do to show them how much you love Jesus? For starters...don't be afraid to smile! I'm not saying you have to be all goofy and smiley, I'm just saying that you should look like you want to be there. Look like you're happy to be with Jesus. Now some people (my husband is one of them) are not super smiley in general, but more of the calm and steady kinds. Andrew does a great job of showing reverence when he prays, and I think that a kind of deep joy can radiate from that. So, however it is that you can show joy...show it! I tend to get so darn excited about anything and everything liturgical that I have to remind myself to act normal from time to time (like the a Mass that has incense and the singing of the Sequence like the one we had this Sunday? Be still my heart.). So I just make a point of showing our girls (mainly the older one) when I'm getting excited. Andrew has a different way of doing it, so there really isn't one right way to go about this. Just let it flow from your own faith. Remember, God gave you the children He gave you knowing what your faith life was like. He paired you with your children for a reason...so be yourself!

Let them see how much you love your faith. And that kind of enthusiasm is infectious, especially for very young children who want to imitate their parents in all they do!

Now for our second point...love on those little ones during Mass!

It is so, so, so easy to get caught up in all the behavioral correction that needs to happen with the typical small child during Mass. So easy to get caught up in the many times that you have to shush them, to remind them to please whisper, to quell any tantrums (and carry them out when you can't), to make bathroom runs, to remind them that we don't climb around on the kneelers, to comfort them when they bumped their heads because they were climbing on the kneelers...I'm sure you can relate. A big part of Mass (and anything else) with little ones is teaching them the acceptable way to behave. But you also want to try to ignite in their hearts the beginning of love for God. But here's the thing: the first way they encounter God's love is through you! If you're impatient with them during the whole or most of Mass (guilty as charged all to often, I'll confess!) then that is what their experience of Mass becomes. You both because stressed and anxious about Mass. Now, I know that there are stages and phases where you feel like you're going batty (9-18 months is a challenge it seems...so much squealing, screeching, crying, and wiggling!!!) but try to slow down. Like, physically, slow down your reaction time. I remember with Therese, I used to literally force myself to slow down my limbs when I reacted to her. When you're living with small people who move at a million miles an hour you easily fall into the habit of doing the same. But, those little stinkers pick up on your mood! I don't know how they do it, but they do it! And I find if I'm hurried/rushed/impatient/stressed/embarrassed they seem to know and they kick up their behavior another notch. And then Mass is just about managing behaviors.

But, depending on your child, there is probably some window of time when their behavior is decent. Lots of kids are golden until after the homily, for example ("golden" being a relative term) and then they lose it. So this piece of advice applies to that period of time, however long or short it is, when your children are acting like human beings during Mass. It might even work to calm them down when they are acting up, but only if they are of a certain kind of temperament. (Works like a charm for the oldest but I have the feeling it won't for the youngest.) Take time to show some affection to each child and let your tone toward them be one of affection. This can be very simple - a stroke of their hair, a knowing smile shared with them, holding a hand, stroking a cheek, or even a cuddle on your lap. However you show them that you love them and are proud of them, try your best to express that. All too quickly, you'll probably dissolve right back into that behavior correction, but don't forget why you brought them to Mass in the first place. You brought them to Mass so that they could encounter Christ, who knows them and loves them and calls them each by name. You want them to see Mass as a place that is safe, that is reverent, and a place where they are wanted and loved. Ultimately, that's what little ones want more than anything else - to be wanted and loved. So, even if you're only able to express that for the first five minutes of Mass...do it. But measure yourself against a different ruler. Don't judge you'r performance based on theirs. They won't do well at Mass for years! They're little. But you, by trying so hard to bring them to Mass, to teach them how to behave, to show them a little love and affections, and to set an example with your own love for God...you are doing well. Very, very well.

Don't get discouraged! These little ones are, as St. Teresa of Calcutta would say, "Christ in distressing disguise." They can be hard to train and hard to show love to. But even by trying to show them the love of God, you are accomplishing something very great. You are showing them, in your own small way, that God loves them, too.

And now for What We Wore Sunday! 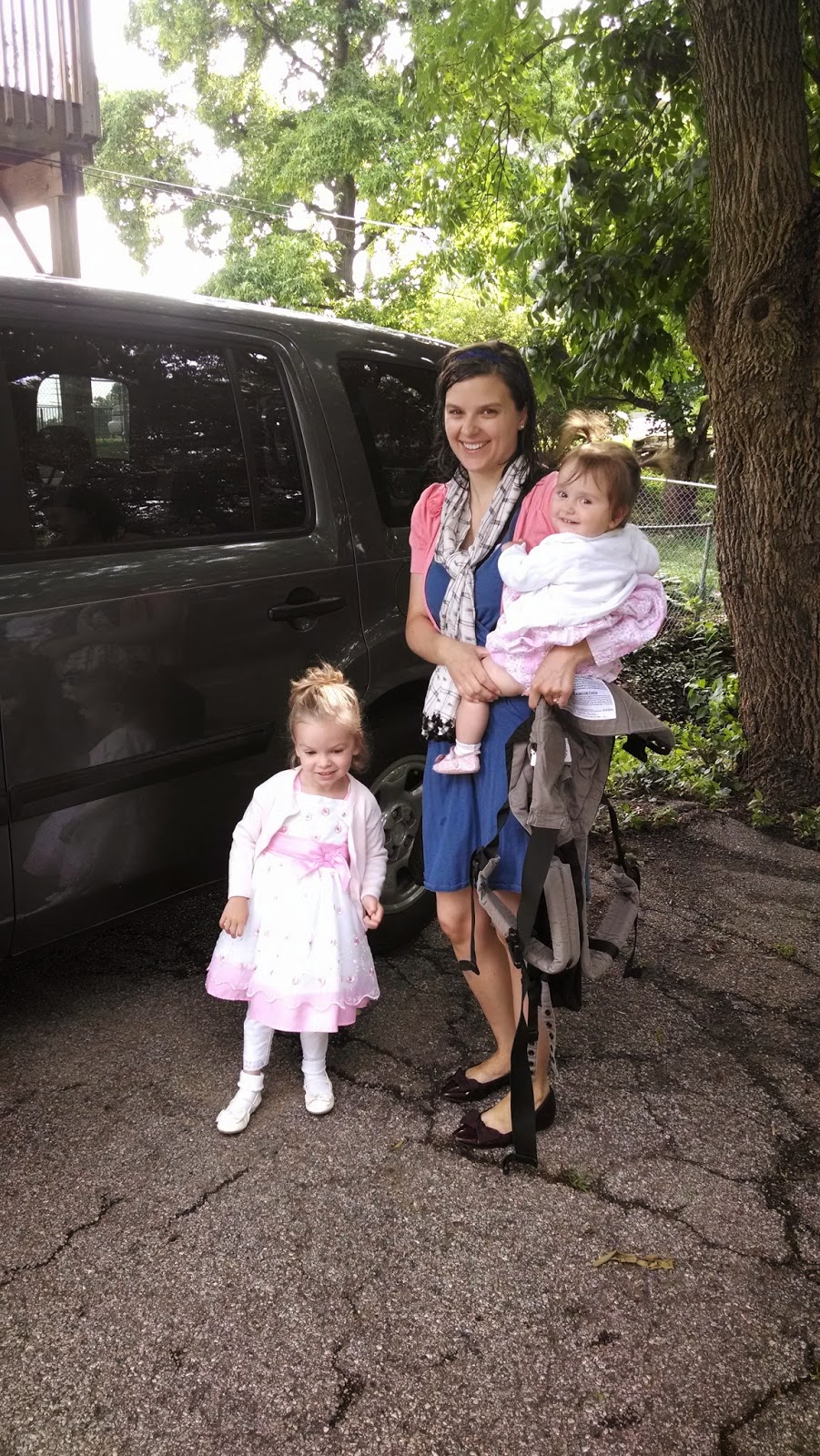 Also joining the The Little Oratory fun! I may add more to that later, but here's a start. ;-)