An Ambulance, an ER visit, and not the Mother's Day I expected...

Happy belated Mother's Day, everyone! Yesterday wasn't what I thought it would be...I gained a new badge on my motherhood sash - an ambulance trip with a child. Thankfully, all is now well, but I think I aged about 5 years yesterday...

First, what we wore to Mass: 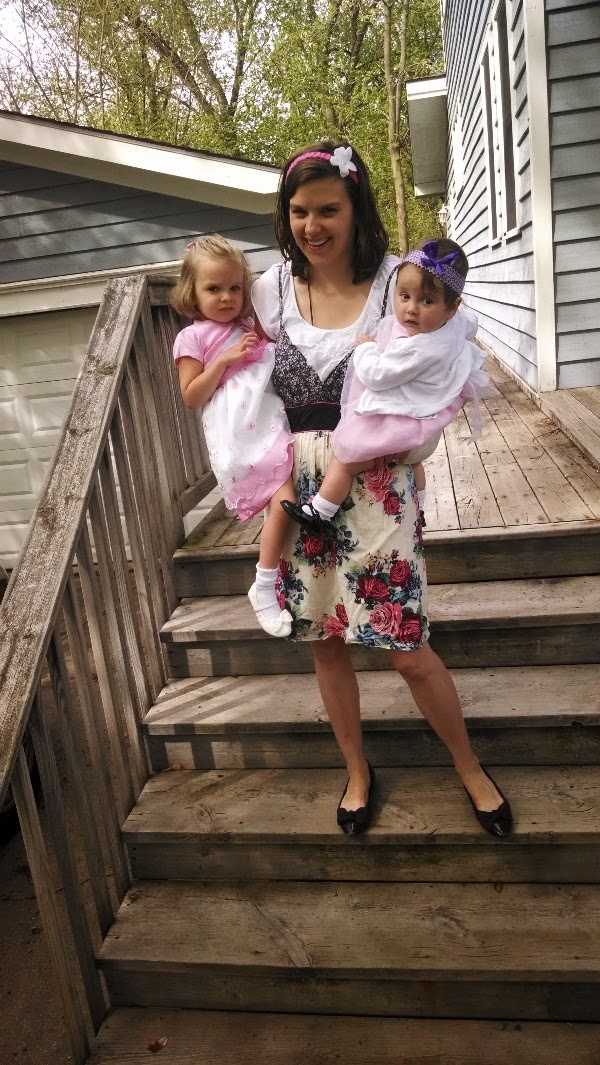 So, Mother's Day was lovely other than the drama of the afternoon! We got to spend Mother's Day with my family (which we haven't been able to do since Sister Stinky was a baby) - going to Mass together, and going out to "the Blue Restaurant". After that, we went to walk around a cute little downtown not far from the restaurant, and stopped to get some ice cream and coffee. Sister Stinky went under the table to retrieve a toy she was playing with, slipped, hit her head on the pointed metal base of the table and...ohhhh, the blood.

It all happened so fast. We all heard her knock her head loudly, instantly jumped up, and sprung into action. She was crying (thankfully) but there was blood. Andrew scooped her up in the way only a Daddy can, ran to the bathroom and I followed. She had cut her head, and -being a head wound - it was bleeding profusely. "Call an ambulance!" he said. My dad quickly did, while we stood in the bathroom with our sweet daughter, covered in blood, trying to get the bleeding to stop. I kept almost passing out from the shock of it all, and almost blacked out a handful of times before the ambulance arrived. Thankfully, some kind man came into the bathroom and helped us. I don't know who he was, but he got a cold compress, helped us stop the blood and get her out in front of the restaurant. By that point, the bleeding had stopped, and she stayed conscious (thankfully) but it took forever for the ambulance to come, and every time I looked at Sister Stinky covered in blood I almost passed out again. Andrew held her in his strong arms the whole time, even up into the ambulance.

When they didn't rush us straight back to a room, I realized that they weren't super worried about her and that helped me to calm down. That being said...she looked awful. Just covered in blood. I never want to see a child of mine looking like that again.

Her love of superheroes saved the day as we were registering into the ER and the nurses and doctor evaluated her. I told them all that she went by "Spidergirl" and they played along, and that calmed her down considerably! Thankfully, she's in a stage where she works through things by hearing stories about them and that helped her work through everything that was happening to her.

It was a moment of grace, a split second decision - but I decided that I didn't care how silly I looked...I wanted everyone to know she was "Spidergirl" because I knew it would help her cope. So, when the nurse came in to wipe off all her blood and asked, "So, what happened?" I hesitated for a second and then said in my storytelling voice, "Well, this is Spidergirl, and she was out saving the city..." then I smiled and shook my head and told her what I actually happened. But that nurse - bless her! - played right along and referred to her as Spidergirl. Then, she filled the physician's assistant in and when she peered around the corner, she said, "Is this Spidergirl?!" Sister Stinky looked pleasantly surprised that she was being recognized. "I just had to come and meet you, when I heard that Spidergirl was here!" she continued.

She was in such good care, and she was doted on and showered with Spiderman stickers. By the time she left she was feeling much better. :-)

And then today...she had all but forgotten about what happened to her. Other than the bright pink band-aid on her forehead and the three blue stitches underneath it, you wouldn't know anything had happened. 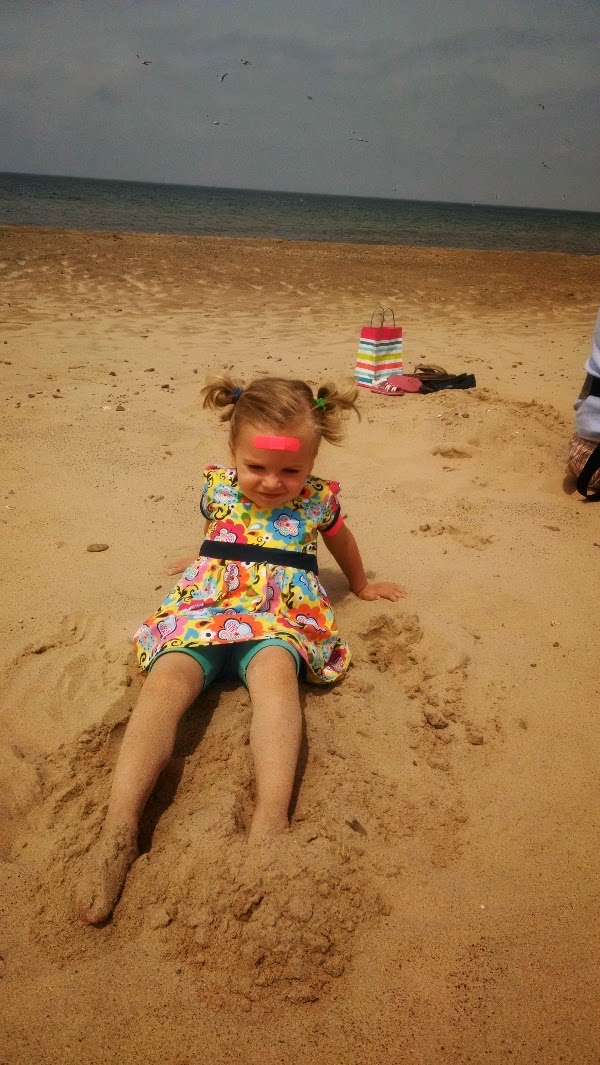 But you better believe...I held her after all of that. And I held her as if I would never let her go. My Mother's Day might not have turned out how I expected...but I finished the day being filled with gratitude for my eldest daughter and for her well-being. I was so scared when it was all happening, and I prayed for her with all my heart. I was so grateful to see how quickly she bounced back, and to see how soothed she was by a bag of suckers (her favorite candy and her special treat for when we need to change her bandaid).

Things like this...they leave your children pretty unscathed, but you as a parent? Oh my goodness. It was incredibly hard just to write this, to re-live those images, but I knew I needed to. There were a lot of graces yesterday - not least among them the fact that we were with my parents and sister who were able to take care of Sister Nugget and get our car to the hospital from the parking lot. But still...moments like that make your love for your child feel so raw, doesn't it? If you're a mom you'll know what I mean. When you see your little one hurting in any way, you just become consumed by how vulnerable they are - and by how vulnerable you are by loving them.

And yet...it's worth it. It's all worth it. Loving your little one is worth the worry and pain that sometimes accompanies it.

Happy Mother's Day? Actually...looking at that smiling face up there (from today!) I must say...it was a Happy Mother's Day, indeed. So grateful that my sweet love is in one piece and on the mend. :-)