Yesterday, I was reading Auntie Leila's Reasonably Clean House series, (stop. go. read it right now). I was, as always, inspired by her writing, and I realized that my way of doing things is similar to hers, but slightly different. I've been itching to share with you my method for a while, because I think it makes things so much simpler! Knowing that Auntie Leila seems to agree made me feel that much more confident. :-)

Oh, and linking up with Five Favorites, being guest hosted over at Fountains of Home this week. Feel better soon, Hallie and clan!

I call this Cleaning the Little House Way.

Pick one chore to do per day.

When I was growing up and devouring those Little House books, I remember always finding it odd that Ma only did one big chore a day. What would she do the rest of the day?

Then, I had children of my own. And then I got it - one chore a day is totally reasonable for a mother of small children. (And she had three small children in Little House in the Big Woods. I could see where she was coming from back when I only had one child!) Click here to see what chore Ma assigned to each day.

My chore schedule shifts, given the rest of life. But my current line up is:

(Meal planning usually happens on Wednesday or Thursday night, and then I grocery shop the next day.) This schedule works for us right now, but it's different than it was a year ago, and you may need to split some of these tasks up into multiple days. The idea is, though, to just pick one task per day, just like Ma.

Try to stick to the schedule every week.

Part of what makes this schedule not stressful for me is that I stick to it most every week. Notice I said most every week, not every week. The reason for that being that...life happens! Sometimes something will come up and I won't be able to do every thing every week, or at least be able to do it as well as I would like. That's okay! I can dust and vacuum a little less perfectly when I know I'll be doing it the next week, and I can skip changing the sheets if I know they'll get washed the next week (and won't be indefinitely dirty!). When you try to stick to the schedule, you can have some wiggle room for imperfection, because most of the time you are doing just fine. I'll bet there were times when Ma didn't do her chores perfectly, but her rhythm gave her a guidepost to aim for.

Ma was so realistic about how she did her chores! She incorporated her daughters into it, when she could, and when she couldn't, she just let them be near her. She viewed her babies as a part of the fabric of what she was doing. In turn, they learned how to do the things that she was doing, because they watched her (and helped when they could) from a young age. My own mom used this same method, and I am incredibly grateful to her for letting me absorb these skill at such a young age. I felt so much more equipped for family life when I got married, and it was all because my mom let me be a part of the workings of our home from a young age. And this goes for boys as well as girls!

The key is to try not to view the littles as a nuisance when you're cleaning (guilty as charged on that front) but rather to let them help (if they're old enough, or interested...Sister Stinky is just starting to hit that age, and I've been trying to practice patience with her!) or let them be a part of the background. That's real life!

Don't try to do things perfectly. 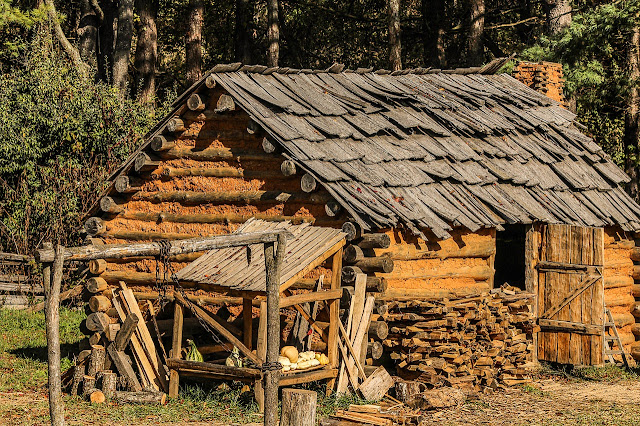 Can you imagine trying to keep a house like that dust free? Do you think Ma tried to do that?

It's just as ridiculous for you to try to keep your house perfectly clean. (Here's where Auntie Leila's series is genius, and I won't try to replicate her wisdom...so go over there and check it out!) The rhythm is what you're aiming for. You want to follow the rhythm of your family's weekly schedule of tasks, trying to get to the day's task as best you can. But you won't be able to dust or vacuum every nook or cranny every week. Sister Nugget usually ends up in my ring sling while I'm vacuuming, and she is not a fan of being bending over in that thing, so you better bet that there are some weeks where I don't vacuum every little corner of the house, or move everything out of the way while vacuuming. I do my best, and I know I'll get to whatever I missed next week (or the week after that). The freedom in the weekly rhythm is that, if the bathroom looks a little messy on Saturday, I know I don't have to haul out my cleaning supplies and scour it then and there. I've got a day set aside to do it, and - in the meantime - it's okay if it doesn't look perfect every day. I know it's clean, since it was cleaned within the past week!

Know your own standards, and your bare minimum.

I'm living with three other people right now, none of whom have the same standards of clean that I do. And my standards have shifted a lot since getting married. I used to be way less organized! I used to have clutter everywhere! That's a story for another day...

But, now, I try to do two things. First of all, I keep in mind the people that I live with and try to have reasonable standards for the three of them. Sister Nugget is basically off the hook right now, and Sister Stinky is still learning to clean, so my main standard for her is judging how well she tries to keep things tidy (and she's pretty good about cleaning up when I ask her, although she does get distracted). The Abbot is more meticulous about some things than I am, and less about others than I am. So, we've struck a balance. We both kind of know what the other's bare minimum of cleanliness is, and do our best to maintain that. But, I'm also aware that if some little thing bothers me enough, it's okay to acknowledge that it's my personal standard and just get in there and do it. The Abbot isn't as bothered by a few dirty dishes in the sink, and it drives me crazy. I know that if I leave them there, he will eventually rinse them and put them in the dishwasher (he's our official dishwasher, but I usually pitch in a good deal), but if I want it done sooner, I can do it myself. And that's okay! It's okay to know what your personal standards are, but don't inflict them on your family, if you can help it (guilty as charged). It's better to have reasonable standards for your family (i.e. the Abbot will gather up any of his or my dirty dishes throughout the house before running the dishwasher, and he loads up the dishwasher and runs it every night) and to acknowledge if your standards are slightly different, but manageable for you (if I want to empty out the dishwasher while lunch is cooking, I can, but that's a lot to ask of the Abbot because he works during the day).

But knowing your own standards, and knowing and maintaining your bare minimum - it saves you from doing more than you need to, and it saves you from bickering with your family. (Again, working on that, so not judging you if you are, too!)

What are your tips for keeping up with the tasks of running a home?
Email Post
Labels: Five Favorites homemaking marriage Motherhood