(Pictures are of my parents' gorgeous church, which we didn't visit this weekend but which I wish we had!)

I realized recently that I'm not sure if I've shared with you yet one of our family's newest traditions - Saturday Morning Mass Dates.

Back before Sister Nugget was born, Sister Stinky and I frequently went to daily Mass together. When she was little, it was for the sake of acclimation on her part. I would take her to a different parish (not our own) so I wouldn't have to worry if she acted up, and we went frequently enough that eventually it started turning around her Mass behavior. After that point, going to daily Mass with her was actually enjoyable!

MAJOR DISCLAIMER: First of all, I don't recommend this for moms who don't have a predilection for daily Mass themselves. I think that if you're going to tackle some sort of prayer routine at a young age, it helps if it's something you love. I don't do a daily rosary with the girls because it's a prayer that I struggle with (and don't say daily, at least not at this stage in life). BUT I really love daily Mass and have for many years, so it's worth a bit of a struggle for me because I genuinely enjoy going. Don't feel obligated to do this if daily Mass is your struggle. Stick to your strengths when they're little! Taking care of little ones is hard enough, and - above all - you need to do whatever spiritually feeds you. 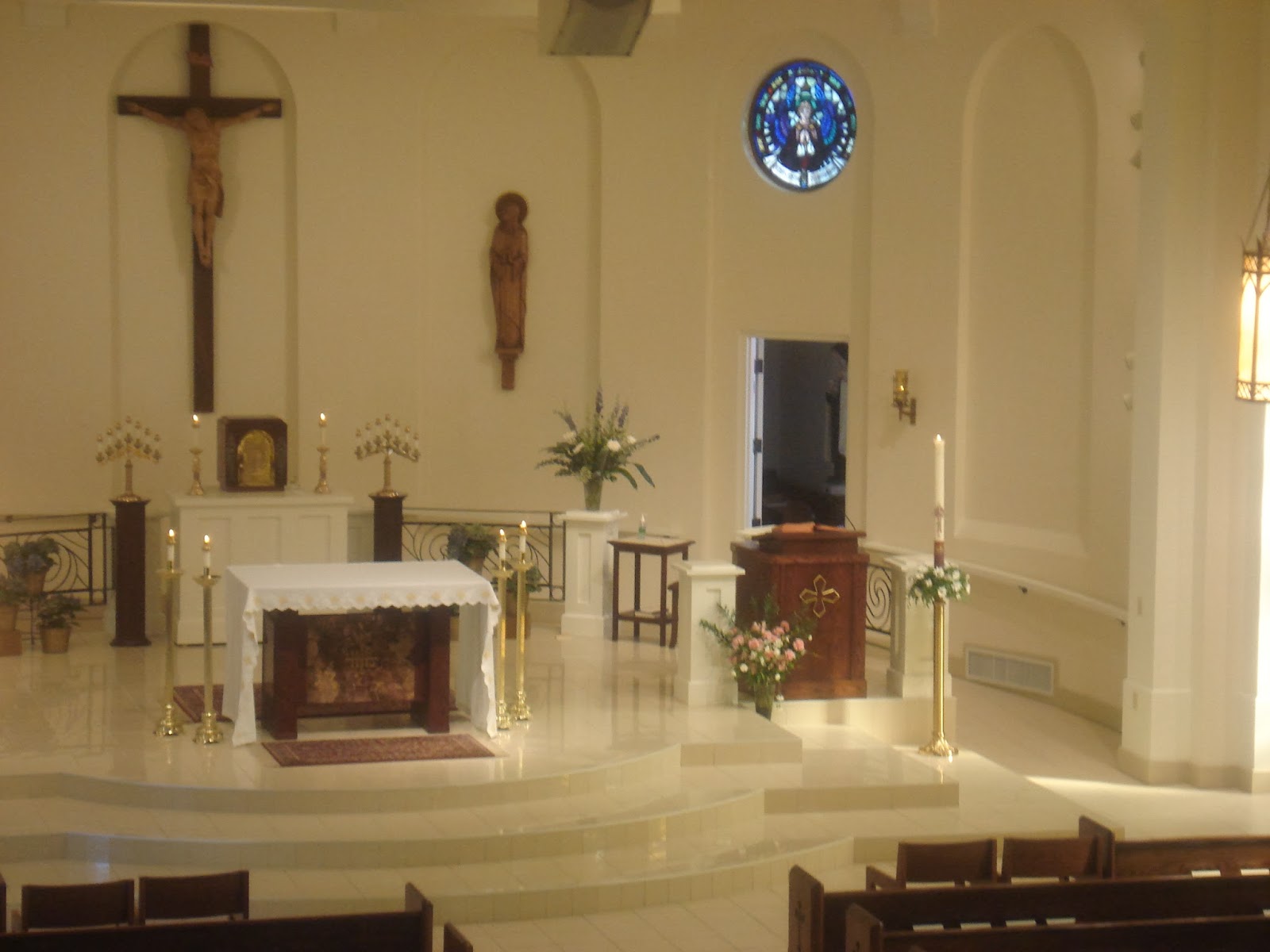 Anyway, along came Sister Nugget, and it quickly became apparent that Sister Stinky and I needed something of our own to cling to. We needed time alone together, just mother and daughter. We both love Sister Nugget (and the Abbot) but our relationship was (and is) important to the two of us. I tried out a few different things, but, in the end, we settled on Saturday morning Mass dates together.

Prior to this, I was going to Saturday morning Mass alone, and I have to confess - I still kind of miss my solo Mass. But, the dividends have been worth it for the time being. Sister Stinky loves being alone with me, and I with her.

The reason why I'm mentioning this is because it occurred to be that I employ something kind of different with her on these Mass dates. The tone isn't identical to our Sunday morning Masses as a family. When we go to Mass together on Sunday mornings, I tend to do a lot more correction. Maybe it's that I feel more self-conscious of her behavior, or maybe it's just that I feel bolstered by the Abbot's presence, but at any rate - Sunday morning Mass is for learning. If she acts up in the least, I'm quick to correct (not that that's always successful...she isn't exactly a perfect, still little angel at Mass, although she does do quite well in general). I'm stricter with her about not goofing around, and although I'll cuddle her as needed, Sunday morning Masses are just...exhausting. Especially with more than one child now, it feels like Sunday morning Masses are constant movement.

But Saturday is different.

Saturday morning is a special, tender time. I am not teaching her how to behave at Mass, but rather I am trying to model for her my personal relationship that I have with Christ. She knows that Mommy loves visiting Jesus on Saturday mornings. She tags along when I go to my monthly Confession. She blows kisses to the tabernacle with me. And she gets gobs of gentle, affectionate, one-on-one attention. On Sunday morning, I am gentle with my correction and quick to show affection, but on Saturday mornings...there is very little correction (and sometimes none). My goal is to just shower her with love and affection on Saturdays, not only for the sake of our relationship, but for the sake of her relationship with God. To clarify, I am quite affectionate with her at Sunday Masses, too (which, I recently realized, is actually in imitation of the sort of gentleness my own parents showed me at Mass when I was growing up) but it just isn't possible to give her total one-on-one attention on Sundays because the rest of our family is there. But, oh, on Saturdays....Saturday morning Mass is a time for snuggles, for being balanced on my hip, for quiet answers given to questions, for whispered prayers together, for the occasional candle lit after Mass, for copious kisses blown to Jesus on our way out. Saturday morning Mass is the time when I demonstrate for her my love for her and my love for God, but, more importantly, a time when I try to really impress upon her God's love for her. I talk to her about how happy Jesus is to see her that morning, and tell her - over and over - how much Jesus loves her.

Now, realistically, this may not be something I'll be able to do one-on-one with each child I'm given. Nor do I think that this particular brand of attention will work with every child (Sister Stinky is the kind that craves affection and cuddles, even if she won't always admit it). But, especially as a mother of daughters, I want to take this time to show them what my feminine spirituality looks like (and I don't mean anything crazy liberal by that - just that my spirituality as a woman is different than their dad's), and for them to see that they are personally loved and cherished by Jesus, and that their mother is very much in love with Him. I want for them to see what a relationship with Jesus looks like, and to have an opportunity to cultivate one of their own. 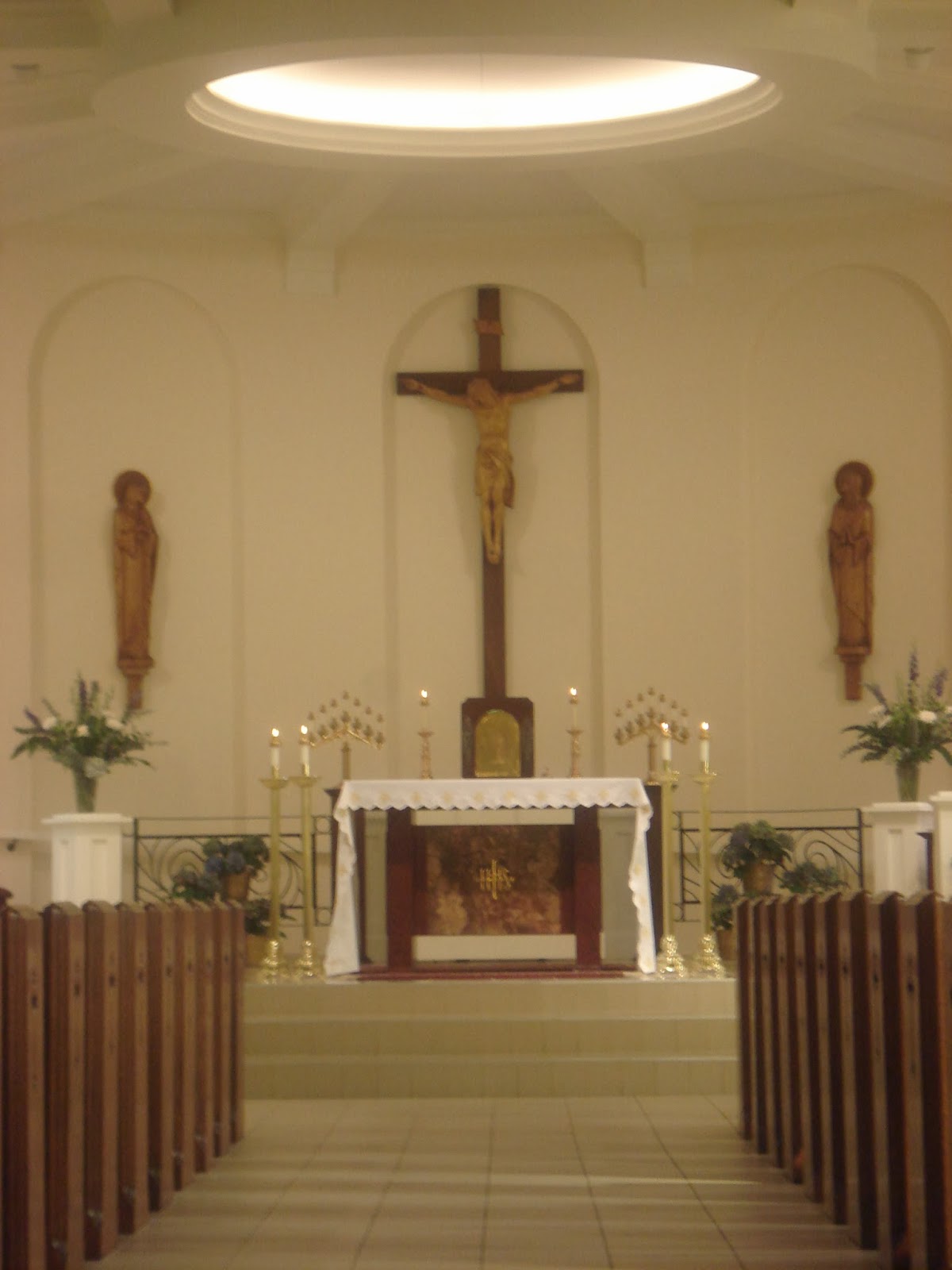 For what it's worth, I'll also throw in there the fact that this isn't possible in the same way when your children are super little. Yes, I tried to demonstrate these things to Sister Stinky when she was smaller, but I'd say that it doesn't really start sinking in to their little hearts and brains until they're closer to three years old. You'll get glimpses before then, but something about that three year old mark makes a difference when it comes to a child's personal faith life. All of a sudden, they wake up and are filled with questions and are very receptive to learning about their faith. It's something that could easily go unnoticed, but if you slow down and take the time to see it, this particular developmental stage in the life of faith will amaze you.

So, my challenge for you for the week? Take some piece of your personal prayer life - something you really love about your prayer life - and include your child in it. Love the rosary? Take time to pray a Hail Mary together. Love daily Mass or adoration? Go together. Liturgy of the Hours? Read a psalm together. Start small, and know that it is better for you to do a very small thing, but to do it in the context of love, than it is for you to try to do what you feel you "should" do, but to do it from a state of being overwhelmed. Ultimately, your faith life and theirs needs to be about a love - a loving relationship with God - and if you begin there, the rest makes a lot more sense.

And now what we wore Sunday! 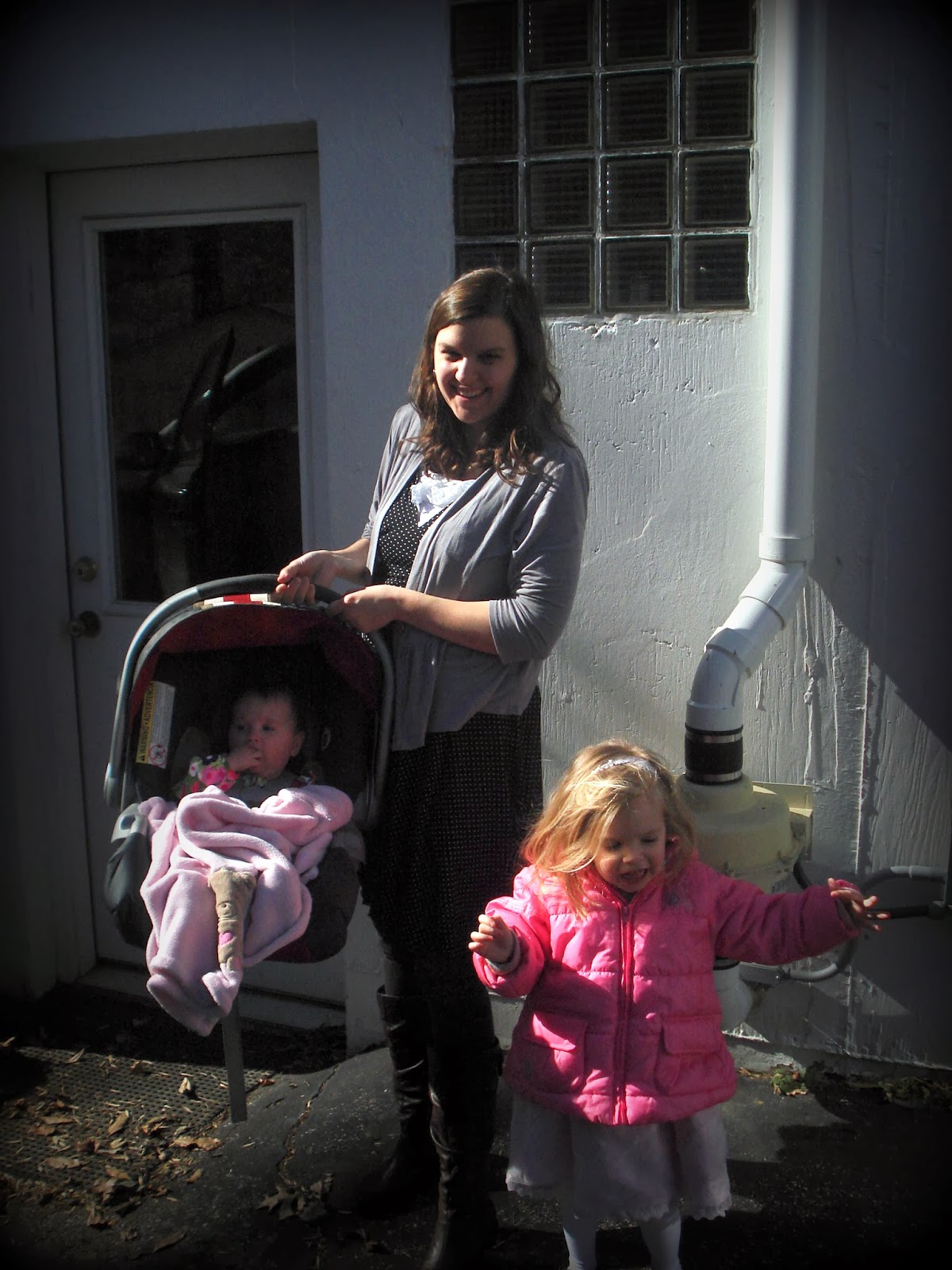 We had a bit of a fail with that first attempt, but the Abbot snapped another quick one while I was taking off my coat, and you can see the outfit better in that one... 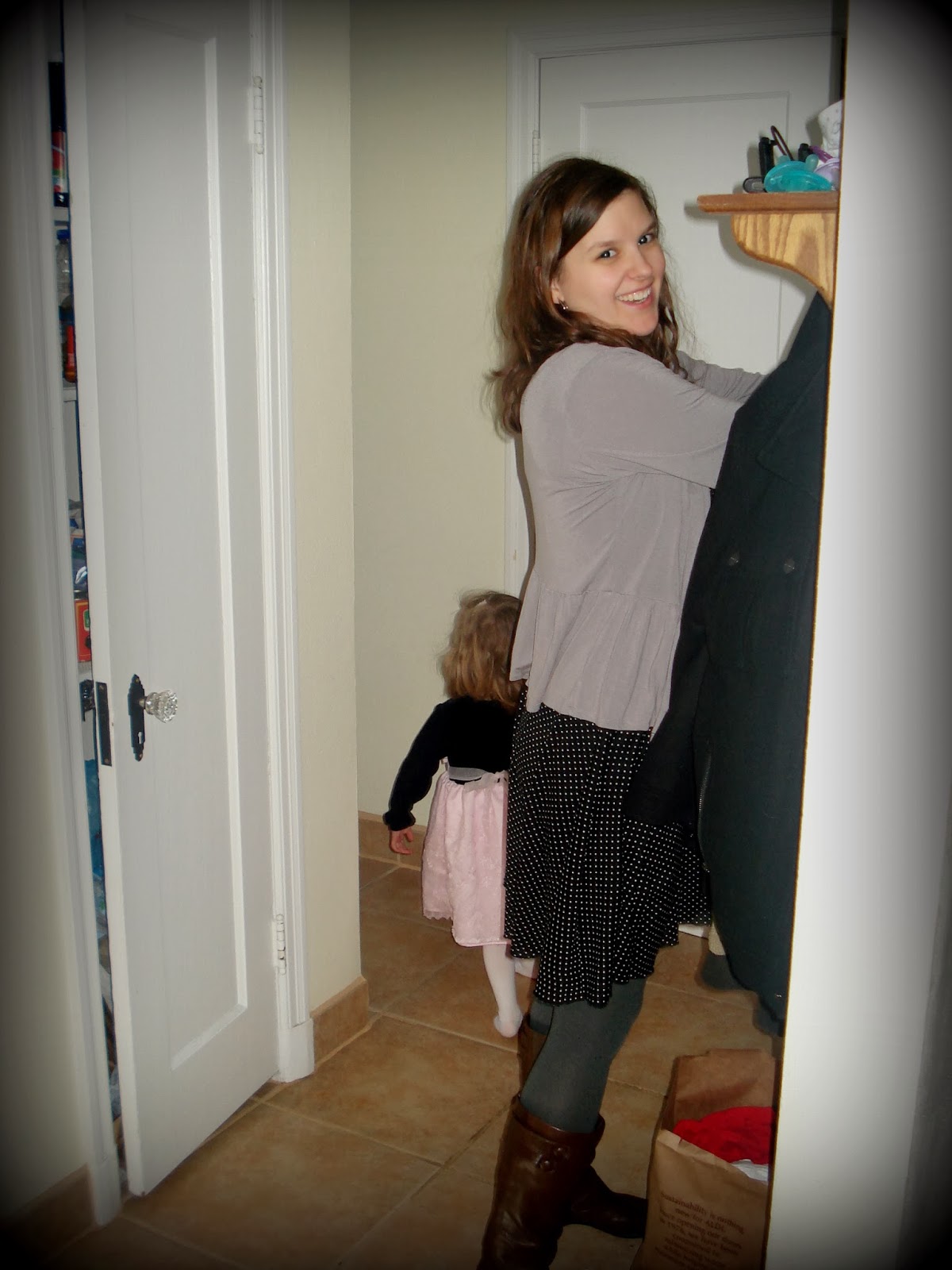 (I love that you get a glimpse of Sister Stinky's little outfit in this one, too. She's such a cutie, and I wish she held still for pictures more often!!!)

Linking up with the lovely ladies of Fine Linen and Purple. Go over there for more Sunday Mass outfit goodness!