On Sitting in the Back of Church

Linking up with the lovely ladies of Fine Linen and Purple.

Before I forget, don't forget that you only have about 24 hours left to place your order before the shop closes again! I can do custom orders if you're interested in something that you've seen on the blog that's not currently listed, so feel free to convo me! 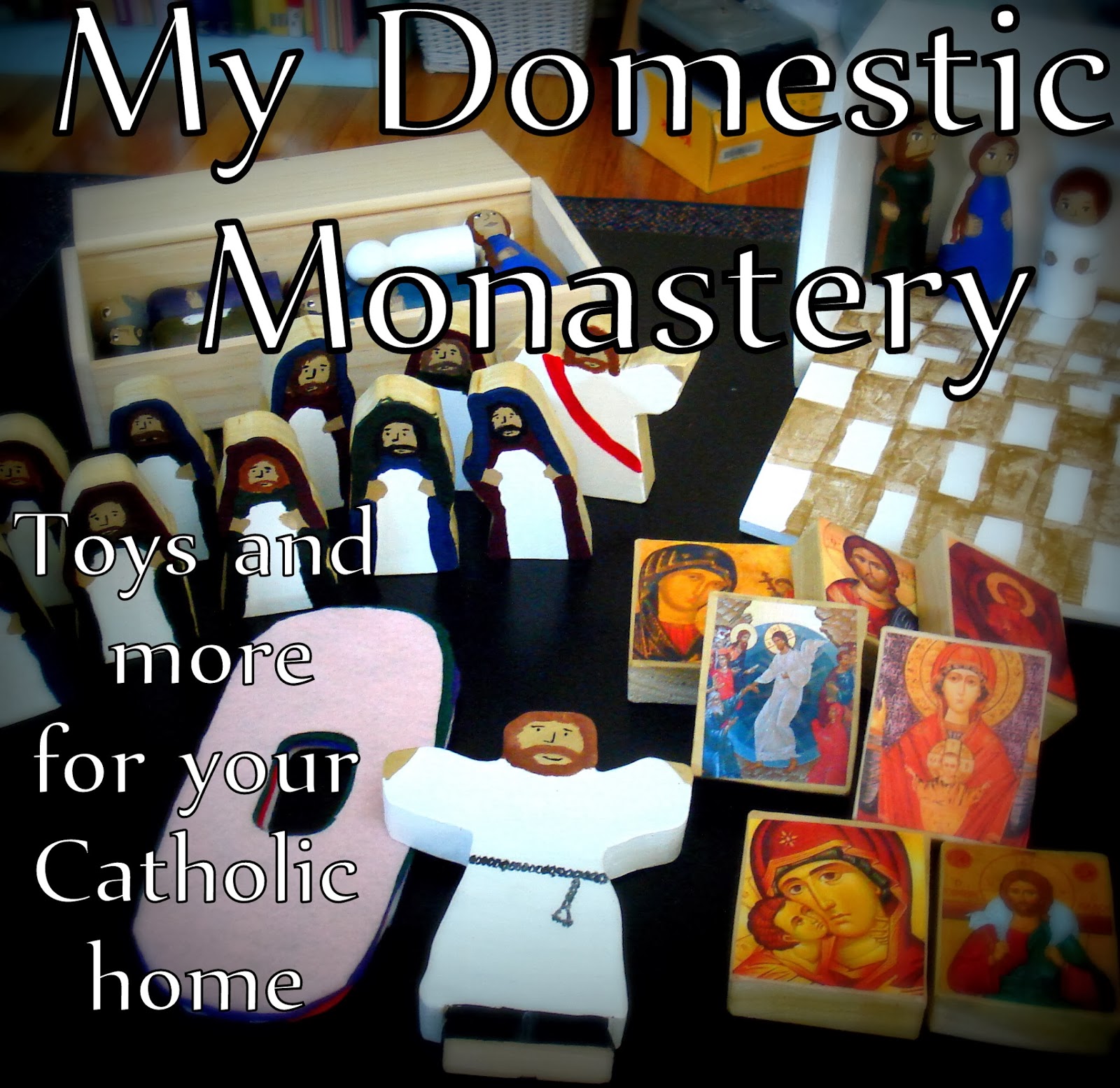 For the first time in quite a while, I was able to go to a daily Mass by myself this week. If I were to give a top recommendation to young moms, that would be it - go to daily Mass by yourself, if you can. Goodness knows that's not a feasible thing to do every day, but every once in a while that sort of silent prayer can be good. ("Good for the soul," as I tell the Abbot, whenever Sister Nugget snuggles up next to me and nurse-naps. Those babies of mine are good for the soul, indeed!)

Anyway, as is characteristic for daily Mass (or Sunday Mass, for most of us) most of the assembly was seated toward the back, and no one was in the front few rows. The priest made a gentle joke about it, as priests often do. (I do feel kind of bad for priests that we all seem to do that. One wonders if you need to throw a disclaimer out there occasionally, "I promise, Father...I don't think you have the plague, or anything.")

But this was a daily Mass crowd, mind you. They certainly weren't sitting toward the back as a sign of disinterest at Mass.

When the priest commented on this, it suddenly hit me that there is a very strong, yet previously not articulated reason why I sit toward the back. I'm willing to bet many people have a similar reason, although they might never have stopped to consider it.

It's because we feel unworthy. In awe. Overcome.

Now, I know that sounds kind of hackneyed, but I promise that I don't mean it that way. I'm not talking about the priest...I'm talking about the reality of the Eucharist. I'm not sure if everyone experiences what I'm talking about, but I know for a fact that I'm not the only Catholic who admits that a church without the Eucharist just feels different. When I was little, I grew up in a bigger city, just outside of Chicago, but I basically lived my life in the sweet little Catholic bubble of my home, parish, and school. That's not to say that that was a bad thing - I think that the sheltering my parents gave me in those early years made me stronger in my sense of what was right and wrong. I encountered enough opposing viewpoints from other people in that bubble, but I also encountered enough people who were strong in their faith that I saw what a beautiful thing that was. I treasure the memories of those early years.

Anyway, the first time I remember going into a non-Catholic church, I was in 5th grade. Our diocese was participating in a special ecumenical program that year, and part of the program was that different prayer services were held in different church of different denominations and we all visited each other. (This diocese actually did some cool things, the most memorable being a Eucharistic procession through the streets of downtown Gary, Indiana.) Anyway, our family went to one of the prayer services, which was held at an Assembly of God church. I don't remember much about the service, but I do remember just feeling like there was something missing. On the drive home, my parents asked my sister and I what we thought about the prayer service and we were both like, "There was no Eucharist. I mean, Jesus wasn't physically there. I mean, we know he was there, in a way, but he wasn't there. It felt different." I've been to other non-Catholic churches since then, and I've had a similar experience.

So, when I walk into a Catholic church, I have a sort of opposite reaction. It feels different. It feels fuller. Even if I'm the only one there, I'm not, and I feel it. A part of me wants to rush up and be closer to Jesus, but I'm often overwhelmed by a much stronger feeling...a sort of shyness. I want to be with him, but I'm nervous to be close to him. All I want is to be one with him in the Eucharist, but I can't bring myself to sit any closer than halfway down the aisle.

I've experienced this feeling before. It is not altogether different than the feeling of falling in love with someone. There is that desire, that pull to be close to that person. But then, there is that shyness, that nervousness, that feeling that makes you hang back a little. There is something special there, and you know it.

So it is with Jesus, our Love. Jesus, the Love of all loves. And I don't think that's necessarily a bad thing. Likewise, I think it is helpful that our priests are always nudging us to get closer to him. Just like a girl sometimes needs her best friend to give her a little kick in the pants in order to say "yes" to a date with that guy she's been eyeing across the classroom all semester, so, too, we need our priests to give us a little nudge to get closer to the one we're so in awe of. It is good to have that sense of awe and unworthiness. God is God, after all, and we are not, as it's been said. But, because of the Incarnation in particular, he's always inviting us closer, and closer, wanting union and nothing less.

And now a peek at what we wore this Sunday! 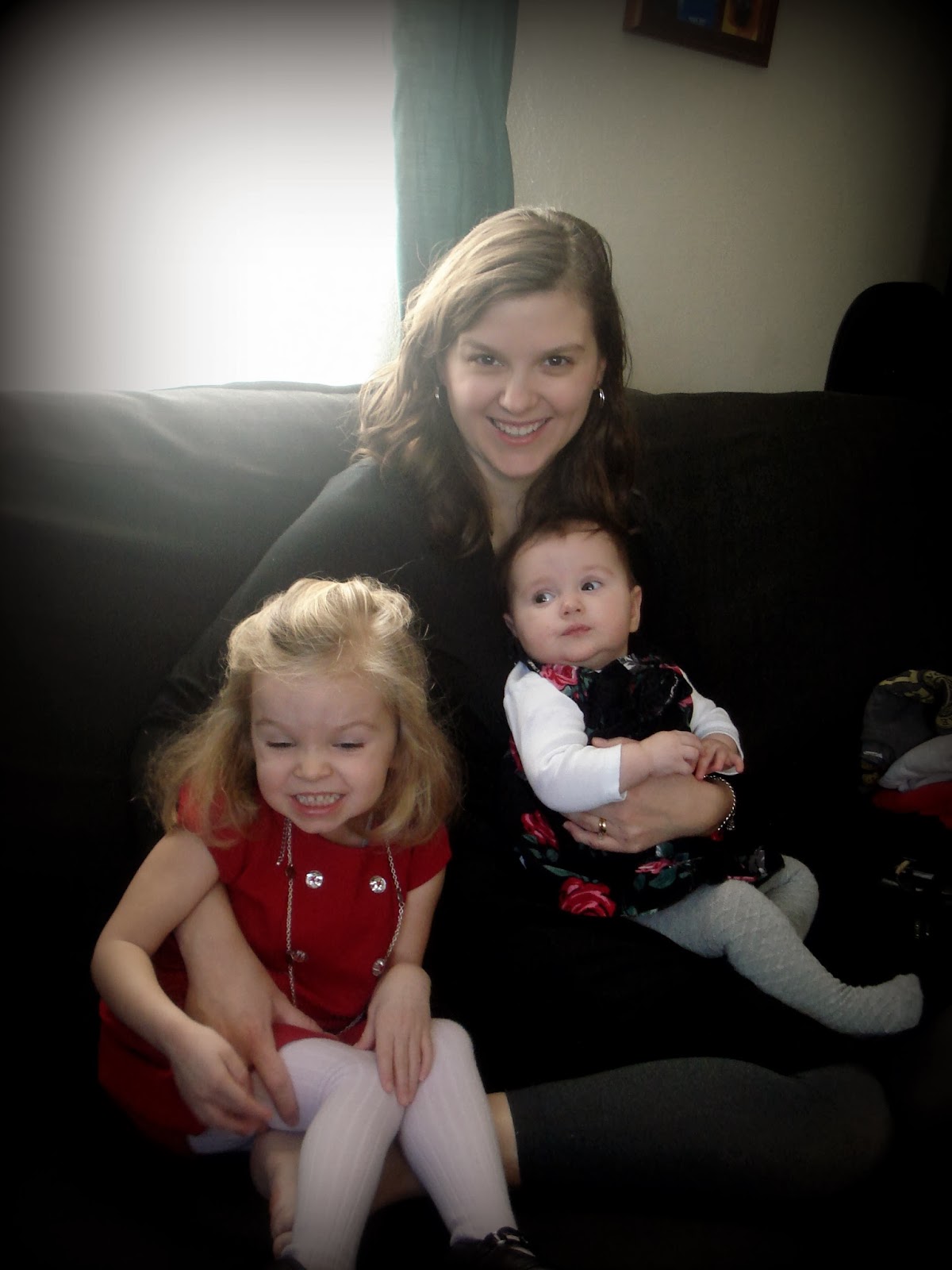 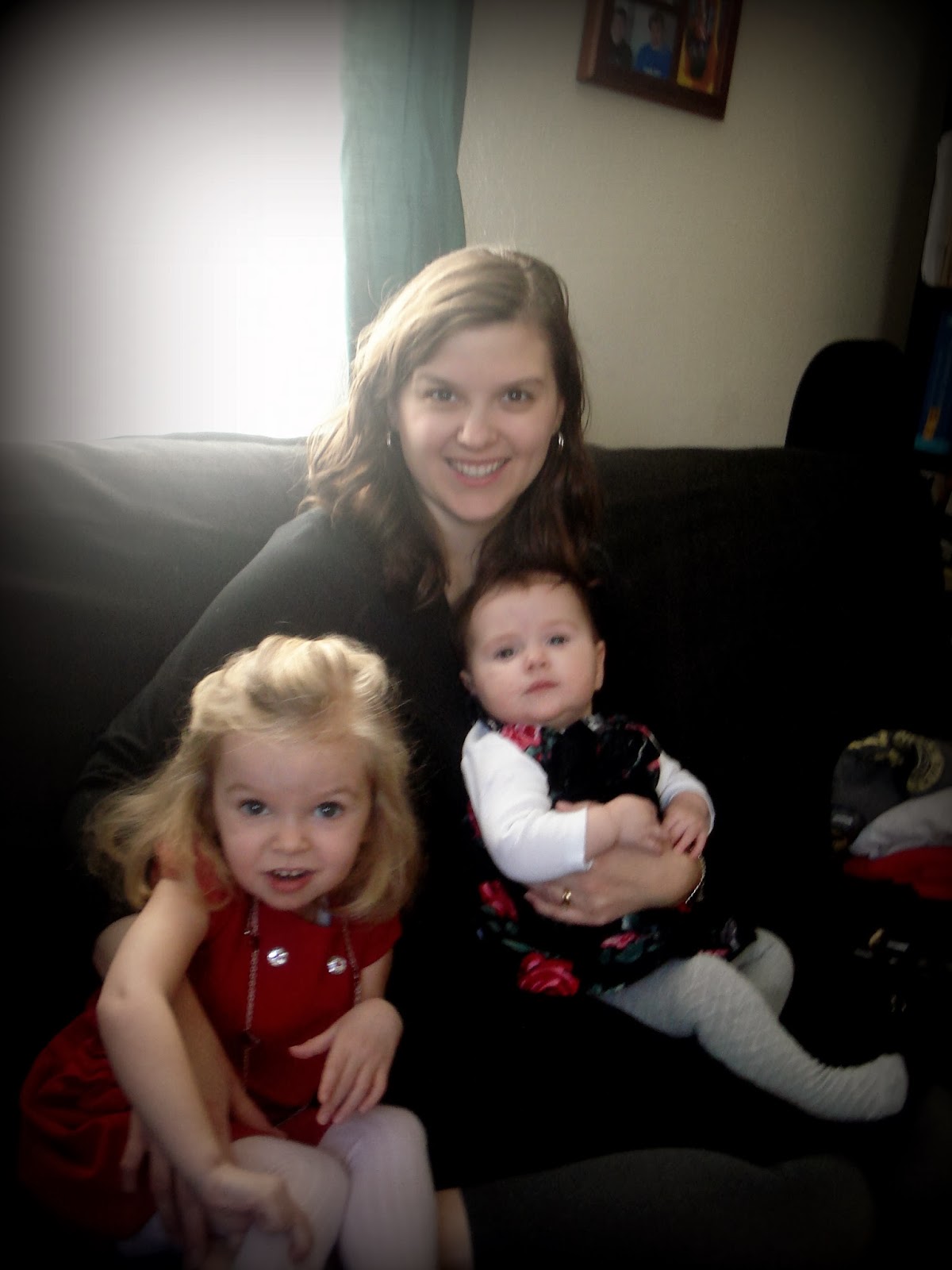 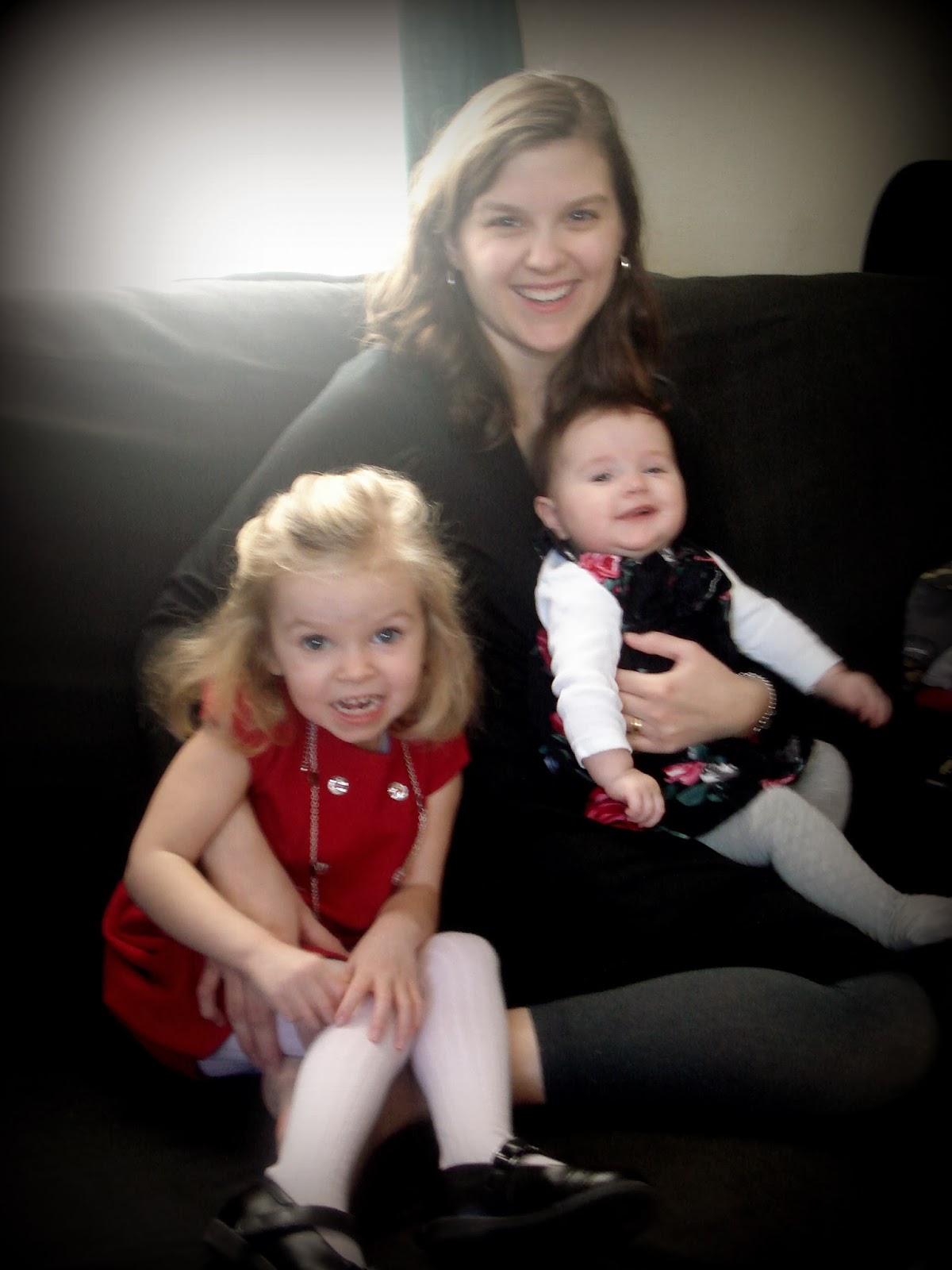 (The Abbot struggled to get a decent one, so you get them all.)

And a peek at this little cutie. She's five and a half months, wearing a twelve months size dress that her big sister wore at 14 months. She's just so tall! 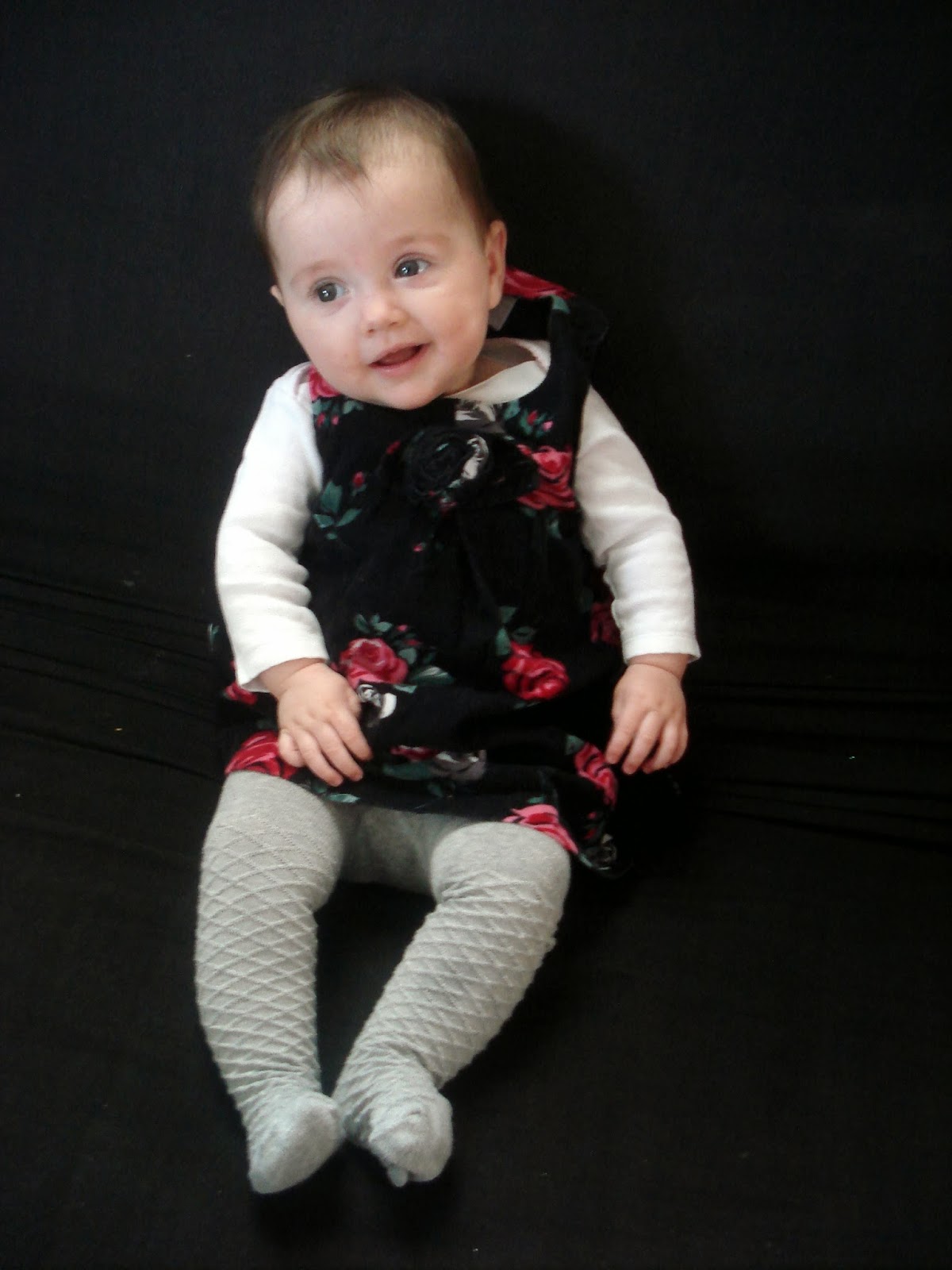