Linking up again with the lovely ladies of FLAP for What I Wore Sunday.

Although, true confession? This was the second dress I had put on and I ended up having to change it moments after this picture was taken. Reason? Spit-up, and lots of it! 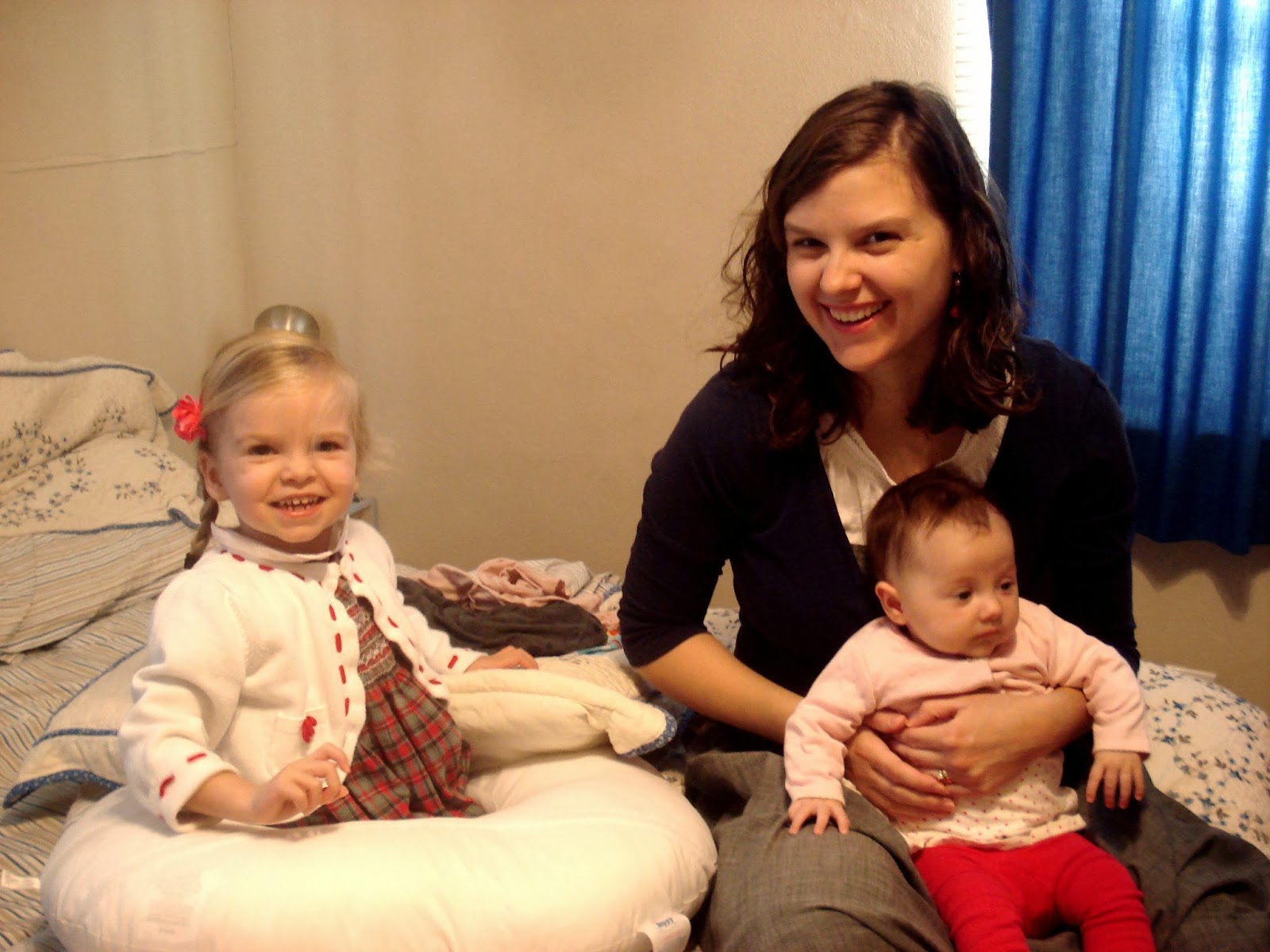 I was pleasantly surprised by how well the girls did yesterday, especially considering that I was lectoring (and Mama leaving the pew during Mass was an absolute disaster the last time I lectored).

But today was a day for humility.

I've shared previously that I'm a survivor and current fighter of post-partum depression. Something that I learned during my first bout with it is that, supposedly, three months post-partum is an especially vulnerable time for moms. I've definitely been feeling it lately, and have generally just been feeling in over my head. Add to that a three year old constantly testing boundaries and a three month old with reflux issues and a touch of colic and you have...well...a burned-out mom. Beyond burned out. Suffering from something that is an actual health condition, NOT just normal mom-stress, and one that MANY other mothers suffer or have suffered from (although it is often grossly misunderstood and stigmatized by the general public). I don't really want to go into all the details of it right here, because it is a bit too real right now. Suffice it to say - motherhood feels like an uphill battle these days, and I know from experience that all I can do is wait it out for a couple more months (since I'm already receiving the health support that I need) and keep on doing all I can to minimize the effects in the meantime. It just really stinks because I thought that this time would be different. My lifestyle is very different than it was last time (not post-partum and working a full-time job while simultaneously caring for my baby full-time), and I have support in ways that I didn't last time (or at least, didn't have until much later in the process). It's miserable, and I know I'm doing all I can, and getting all the help I can, but it's just exhausting.

I share this with you because, like with hyperemesis gravidarum, it closely mirrors the normal state of things. Women do tend to get some nausea during pregnancy, and most mothers are overwhelmed after having a new baby. Because of those similarities, both conditions are usually downplayed, and the woman suffering from them is considered to be over-exaggerating. Nothing could be farther from the truth, and when well-meaning individuals suggest that to a women in the midst of that kind of suffering, it can only worsen her condition. I'm sharing a glimpse at my struggle with you, because I hope that if you, like me, have been through the absolute misery that is PPD, you will take comfort in knowing you are not alone.

The one blessing in my PPD is that it makes me so much more humble than I would naturally be. When I'm fully healthy, I tend to really have things together, and it is easy for me to forget how much I desperately need God in my life. When I'm in the midst of battling something like PPD, I am extremely aware of my need for God. I know that I cannot get through the day without Him, and without the various people He sends into my life to be a comfort and a support to me.

On Mondays, I take the girls to Mass at the local diocesan office building. They have a lovely chapel, with a very monastic, choir stall sort of layout. Usually, the girls are quite good for me at this Mass. But today...well, they certainly weren't bad, but they certainly were both acting in full fledge 3 month old/3 year old mode. Sister Nugget was fussy, Sister Stinky was jabbering and pooped her pull-up...you get the idea. I felt like one of those moms who seems to not have it together in the least. Then, the time came to go up for Communion, and I had to walk up there with a baby on the verge of losing it and a toddler who reeked of poop. I felt so self-conscious. As we walked back the long, central aisle to our pew, I looked back to see Sister Stinky half-walking/half-dancing and humming a little tune to herself. Smelling like poop. I was so embarrassed.

Then, I took another look at her, and saw how little she was. I remembered that I had Jesus in my mouth, and turned to Him for guidance. And then, it hit me.

I may not be in a place in life where I can make a huge public witness to the faith, but standing with the poor and marginalized. But, that doesn't mean that I can't choose to stand with Jesus right where He is in my own life. He loves Sister Stinky - poop and all - and acting ashamed of her and her littleness is forgetting that she is "Christ in distressing disguise" (as Mother Theresa described it). But standing with her, walking down a long aisle with her noisy, smelly, three-year-old self, and choosing to associate with her - and even smile at her and love her! - this is an opportunity to love Christ in one of His least (or at least "lesser") lovable states.

But add into the mix everything that I described above...and choosing to love these little people is sometimes a monumental task. That is where grace comes in. God more than fills in the gaps where I am lacking due to my own weakness. He give me the grace to do what I wouldn't be able to do otherwise - to love.

And I am so, so grateful.