This post brought to you by Netflix. All opinions are 100% mine.
Hi, friends! It's no secret around here that our family loves Netflix! So, when Netflix contacted me to be a part of their Thanksgiving campaign...you better believe I jumped on that bandwagon!!
Netflix is a staple around this house! A monthly subscription is very reasonable, even for our tight budget, and it allows us to watch all sorts of movies and TV shows. From our Saturday evening family movie nights (pretty much a highlight of the week for Sister Stinky!) to my nightly dates with the Abbot, Netflix really brings our family together and helps us build some special memories. :-)
One of my favorite things about Netflix, though? It's available for streaming! That's our favorite way to use Netflix. It means that Sister Stinky can cuddle up in the Abbot's office with his iPod and her favorite show (one of her favorite things to do while Daddy's working), or that I can watch a show on the Kindle while trying to nurse Sister Nugget down for a nap, or that the Abbot and I can stream our latest favorite show on his desktop computer after the girls have gone to bed. It's great! And that's just using the devices we have...the options are endless! Netflix works on an iPad, can be streamed on your TV, watch it on your phone...you can watch it pretty much anywhere!
Another kind of cool feature of Netflix streaming is that they'll make suggestions for other shows you might like, based on your viewing history. I love it when a suggestion pops up that I didn't even realize was on Netflix! Not sure where we'll be celebrating Thanksgiving this year, but I can tell you that some Netflix viewing would be a good way to fill in that downtime waiting for the feast to be done!!
I'm definitely a multi-tasker, and have employed Netflix as background to all sorts of tasks - from folding laundry, to sewing, or working on handmade gifts during Advent. So, when Netflix sent me a recipe to try out and suggested watching my favorite show while cooking...it didn't take too much convincing!
The recipe I got to try out (found at the bottom of this post) was "Freddy's Sticky Saucy Barbecued Ribs," a recipe inspired by the show "House of Cards". You can bet that the Abbot was excited to have ribs for dinner! 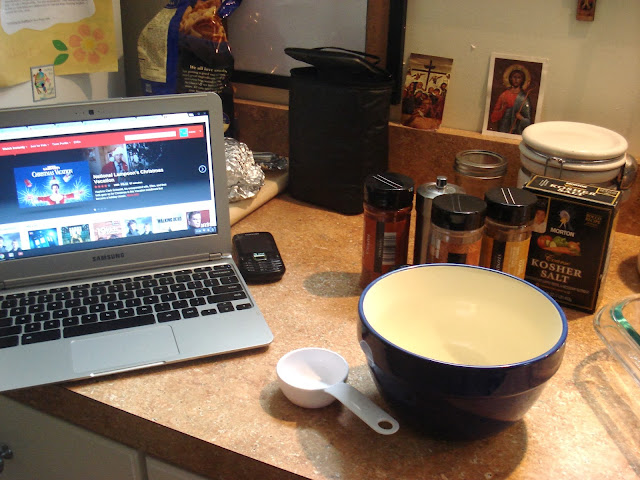 Can you tell what was my show of choice while cooking? 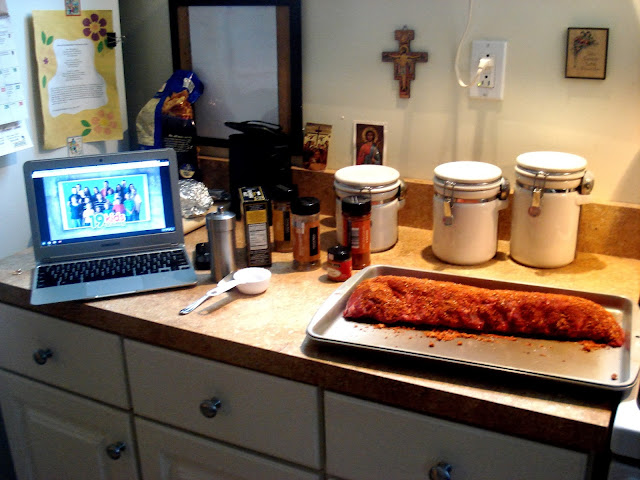 I just love watching the Duggars on Netflix! 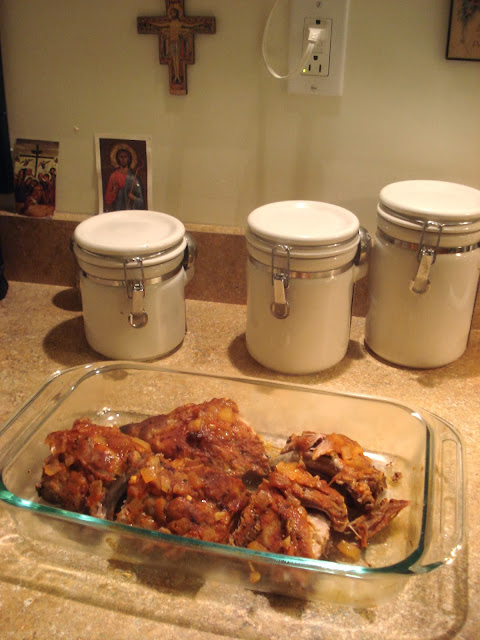 And don't those ribs look delicious? They were fall-off-the-bone amazing!
This would be such a fun idea to do for a girls' night or a date night! I can think of all sorts of fun recipes to go with my favorite shows...yogurt while watching Burn Notice (in honor of Michael Weston's favorite food) or tator tot casserole while watching 19 Kids and Counting...the possibilities are endless!
I'm looking forward to checking out some of the Christmas movies on Netflix...how about you?
In the meantime, you can bet that we'll be using Netflix to entertain our little three-year-old early riser while we're traveling this Thanksgiving and Christmas!
What are your favorite shows to watch on Netflix? Any suggestions for our family?
Be sure to follow Netflix:
Like Netflix on Facebook
Follow @Netflix
Follow Netflix on Pinterest

Every time I’m watching “House of Cards” on Netflix, I want to taste those ribs that Frank eats from Freddy’s BBQ Joint. Now we all can sink our teeth into those sticky saucy ribs right along with Frank! These ribs are served with a barbecue sauce more like the one you’ll find in North Carolina (where Frank is from originally) – one with plenty of vinegar, mustard, and a touch of heat. I’ve included two cooking methods for you to try – the original true barbecue method where the ribs are slowly smoked in the barbecue, and the quicker oven-baked version – both are finger lickin’ good!

Serves: 8
Prep Time: 5 hours (includes marinating time)
Cook Time: 4 1/2 hours (for barbecued ribs) or 2 1/2 hours (for oven-baked ribs)
Make-Ahead: The barbecue sauce can be made up to 2 weeks ahead, cooled, covered, and refrigerated; reheat before using.


Method
To prepare the spice rub:
Meanwhile, to make the barbecue sauce:
Alternatively, to bake the ribs: