Linking up with the beautiful Jen.

-1-
This Thanksgiving has been so incredibly hard. Actually, this whole week has been really hard. What was supposed to be a simple surgery and recovery has proven alot harder for me, and I've basically been in bed most of the day for over a week now. First we had plans to visit the Abbot's extended family in Maryland, but had to cancel those when my recovery was so painful. But, wait! We figured we could at least visit my family in Michigan. We could drive up there Thanksgiving morning, since I was having my stent removed (that had been put in during surgery to promote healing) on Wednesday. Most people feel 100% better within a few hours of having the stent removed.

So, we made the tough but wise decision to stay home.

Anyone who knows me knows that I am a perfectionist. That I like doing everything myself and adding in a million special details. BUT God has slowly been breaking me of that. I had to stay in bed all day yesterday and today, so I wouldn't have a recurrence of the pain that I had Wednesday night. And that was hard for a mama who likes to do, do, do.

Late Wednesday night, when my pain medication finally kicked in and I could think clearly again, I came up with a simple Thanksgiving day menu with the Abbot. He went out to the store, picked up what we needed, and we all got some rest.

The day of was far from what I would previously have considered perfect. Despite the Abbot's best efforts, the house just isn't as neat as it is when we're both able to keep things organized (and the Abbot does do quite a bit in terms of chores and such). The babies were their usual, noisy selves. I directed the Abbot on how to make the meal via text messages from my perch in the bed. I briefly came down to season the meat, then had to recover from the resulting spasms in bed. I barely managed to get dressed, and I was just praying I'd be able to sit through dinner without another episode of awful pain.

But do you know what? 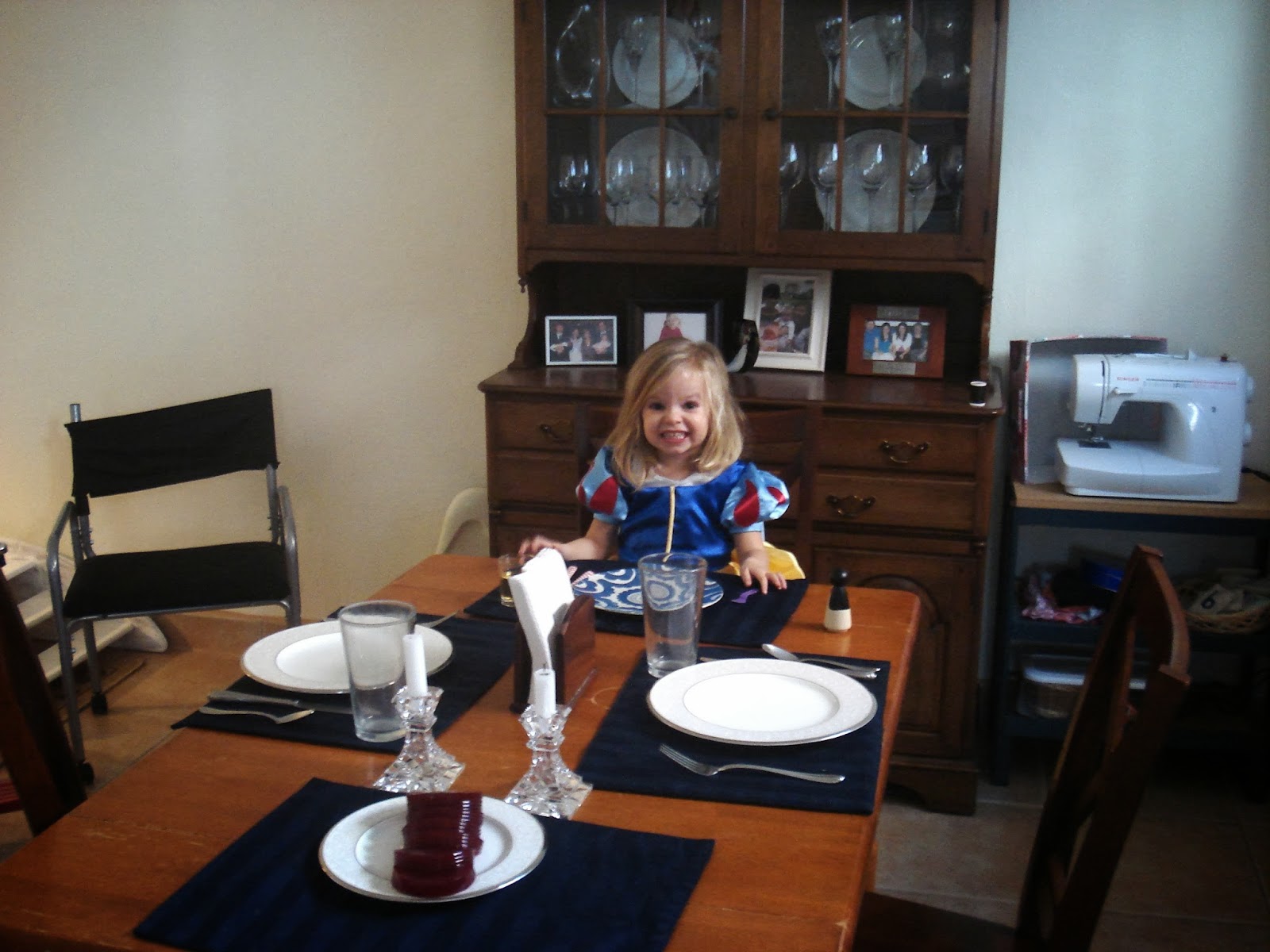 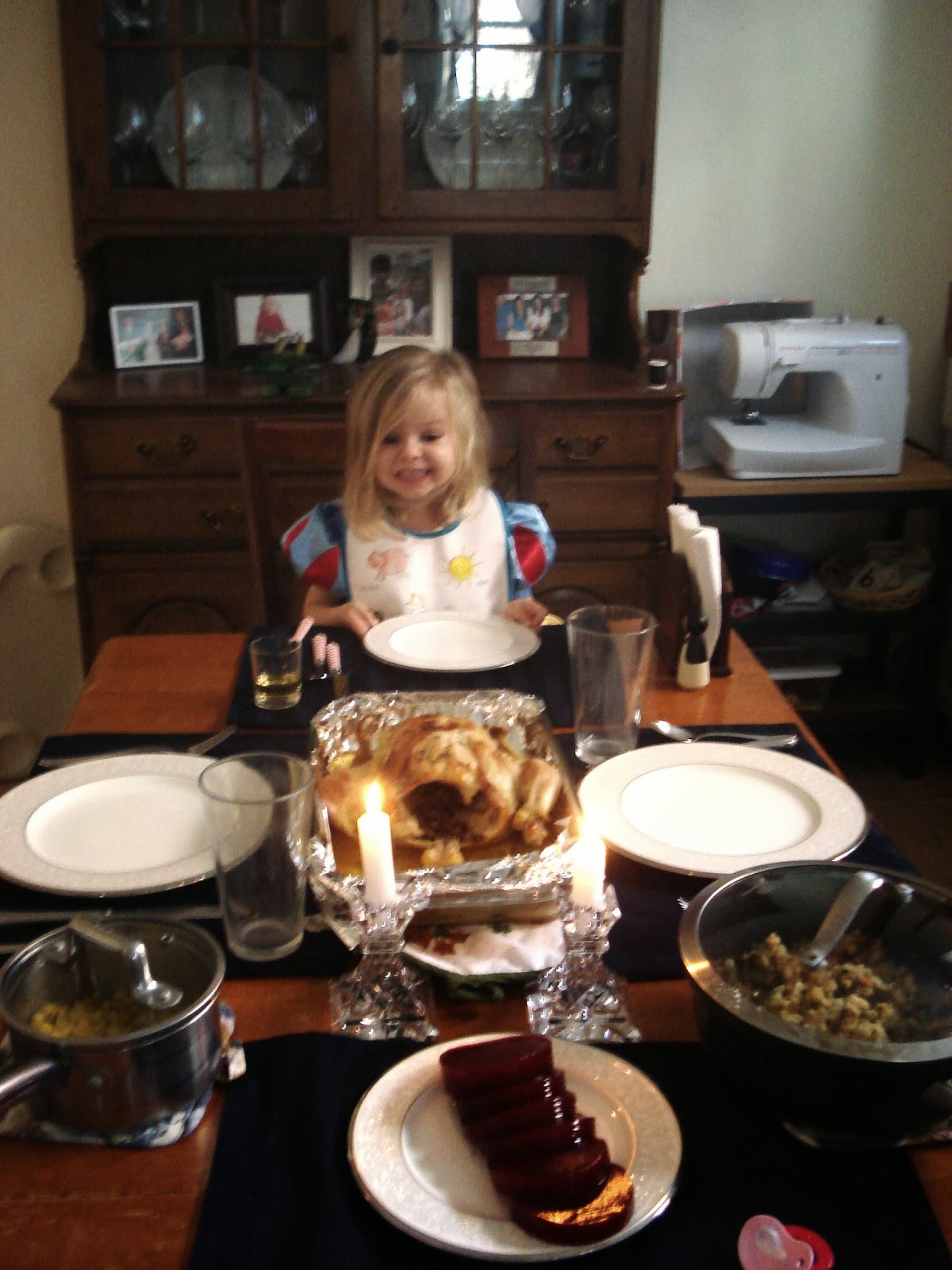 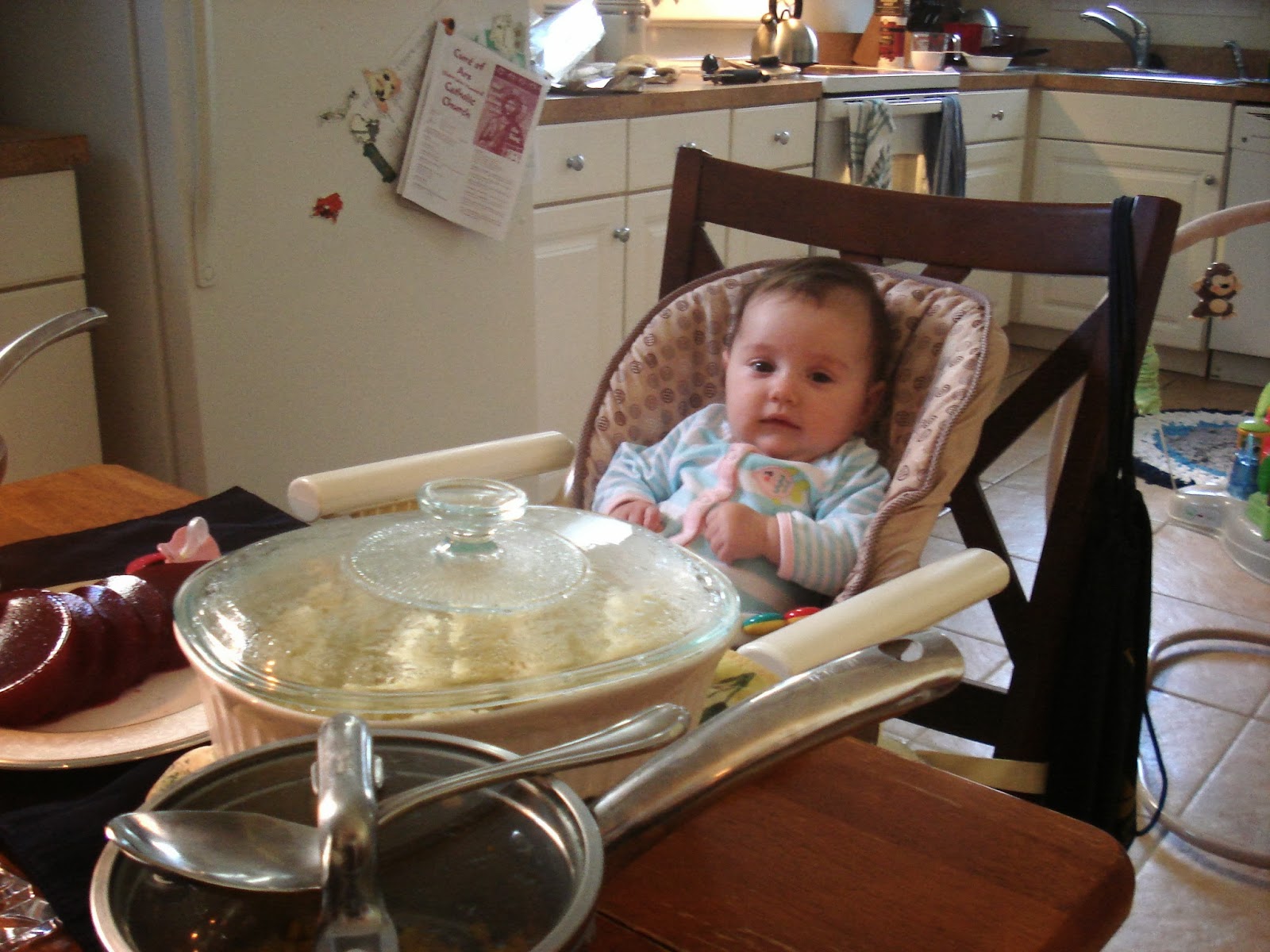 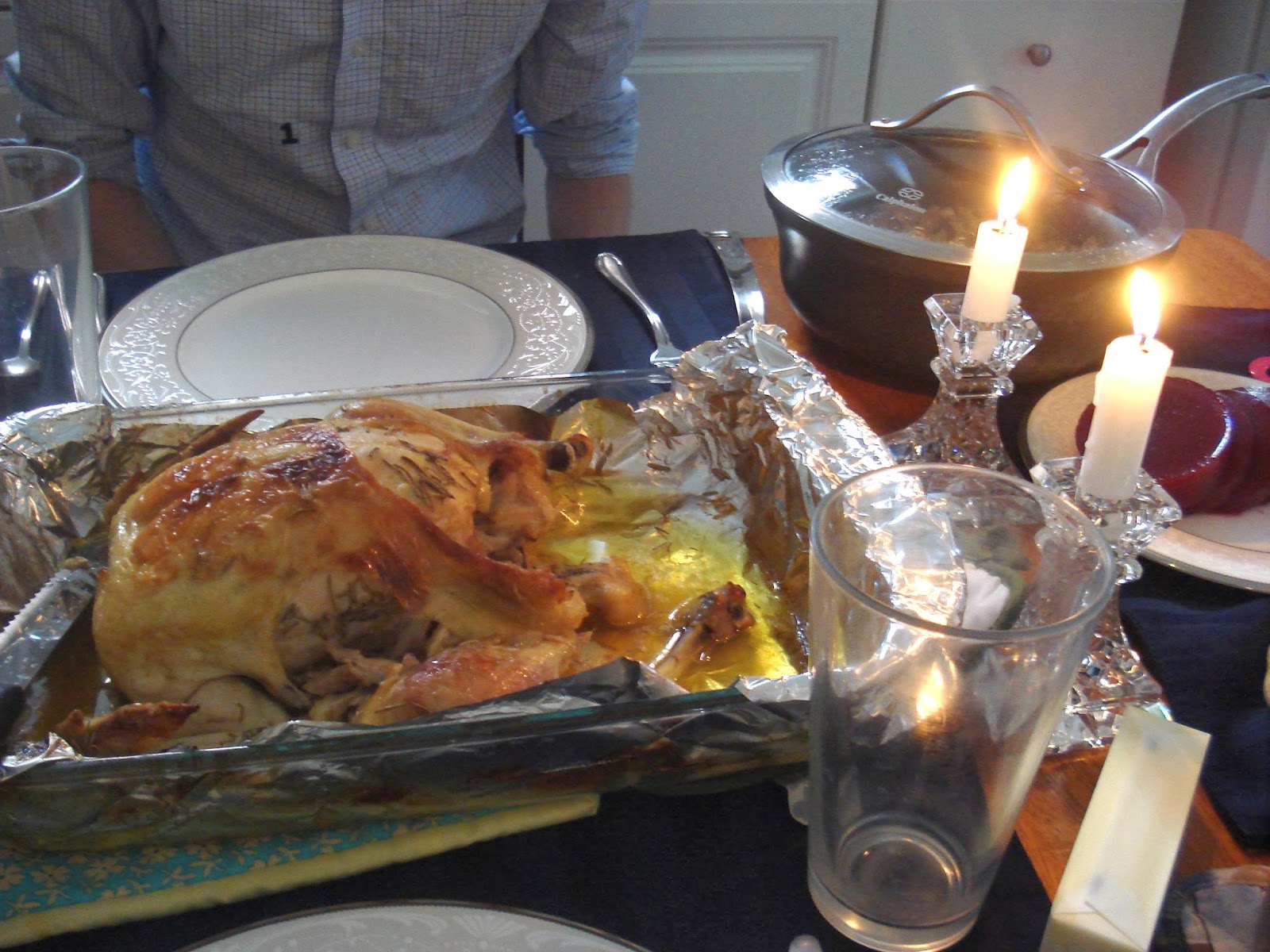 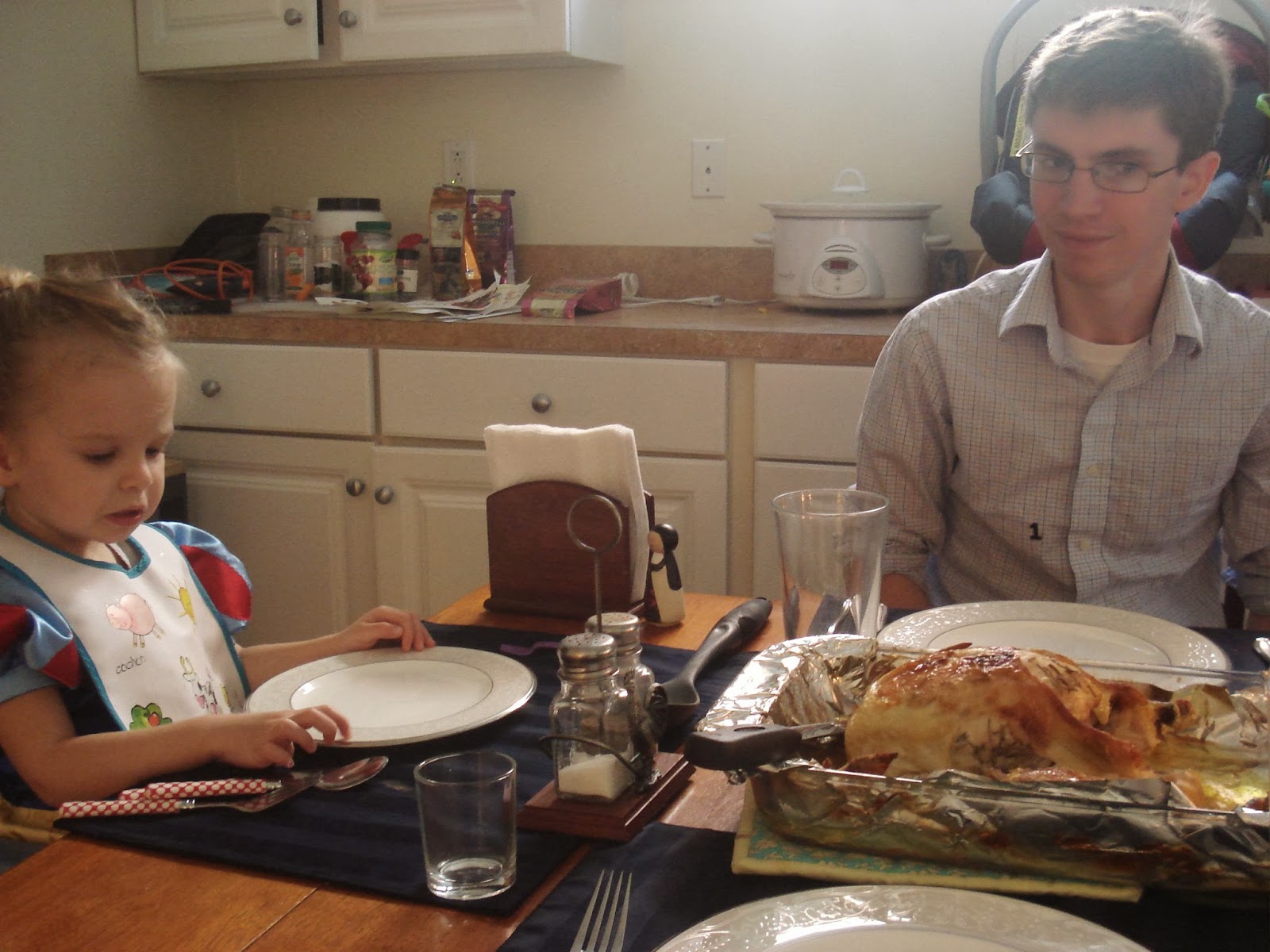 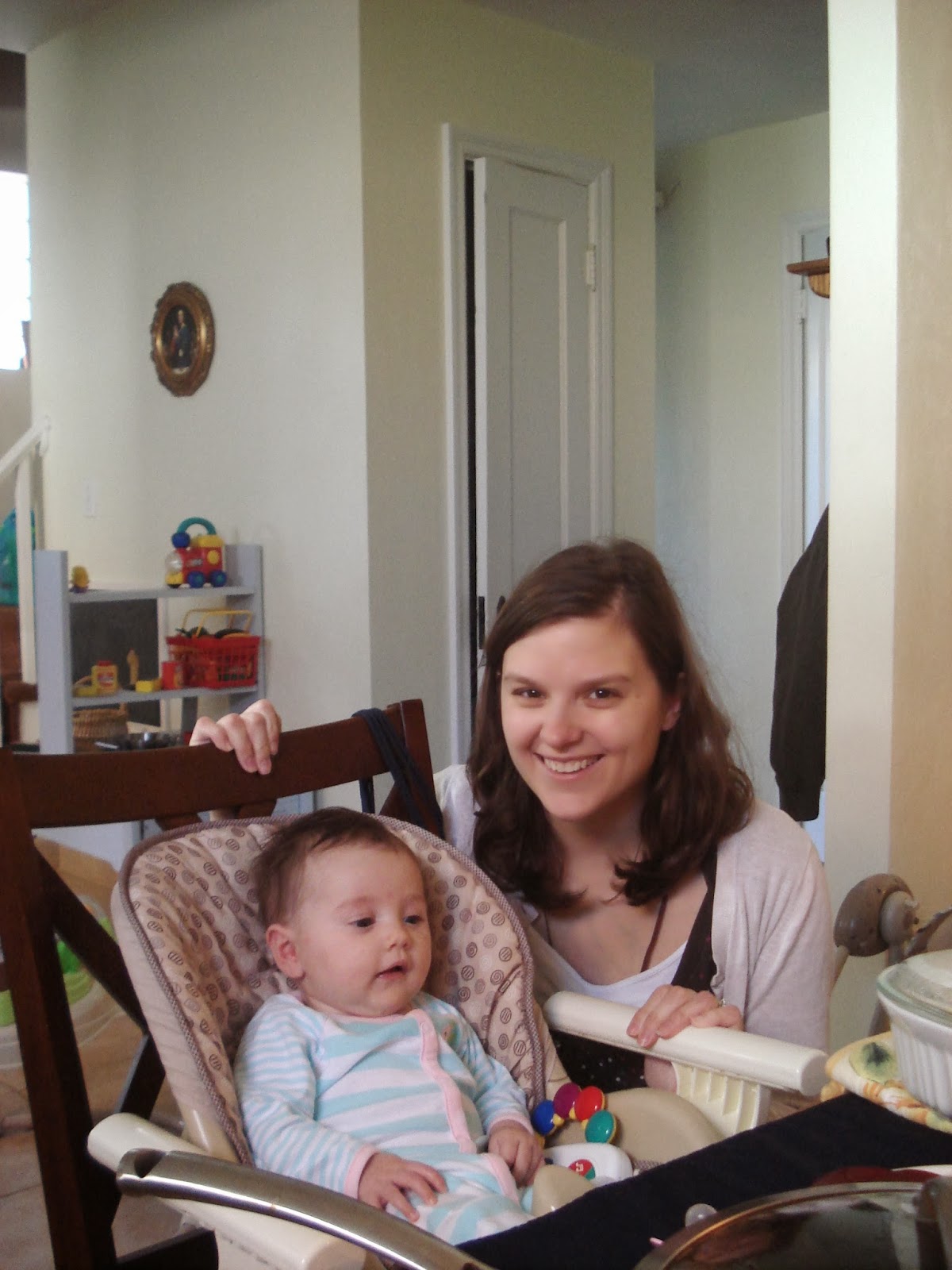 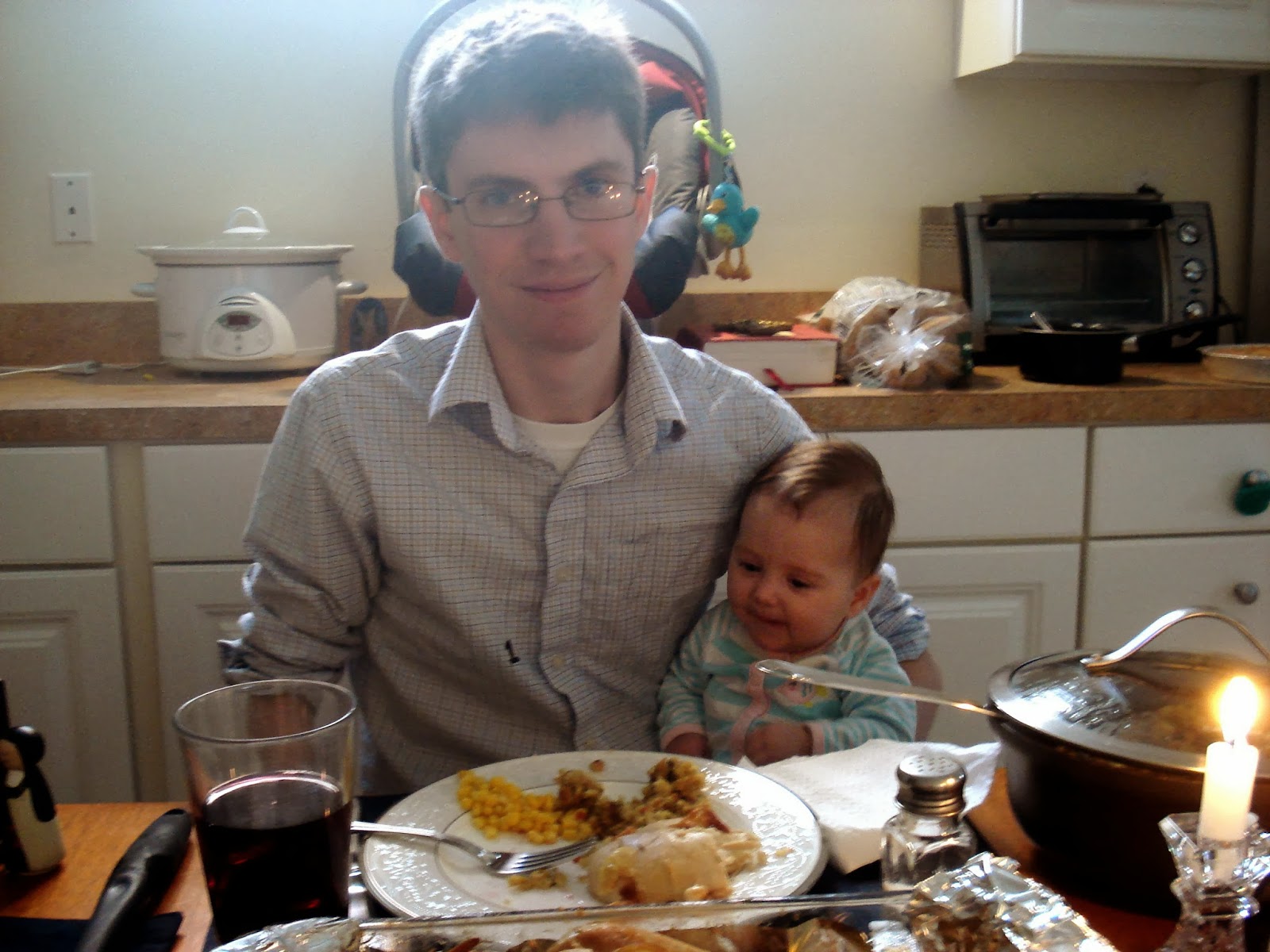 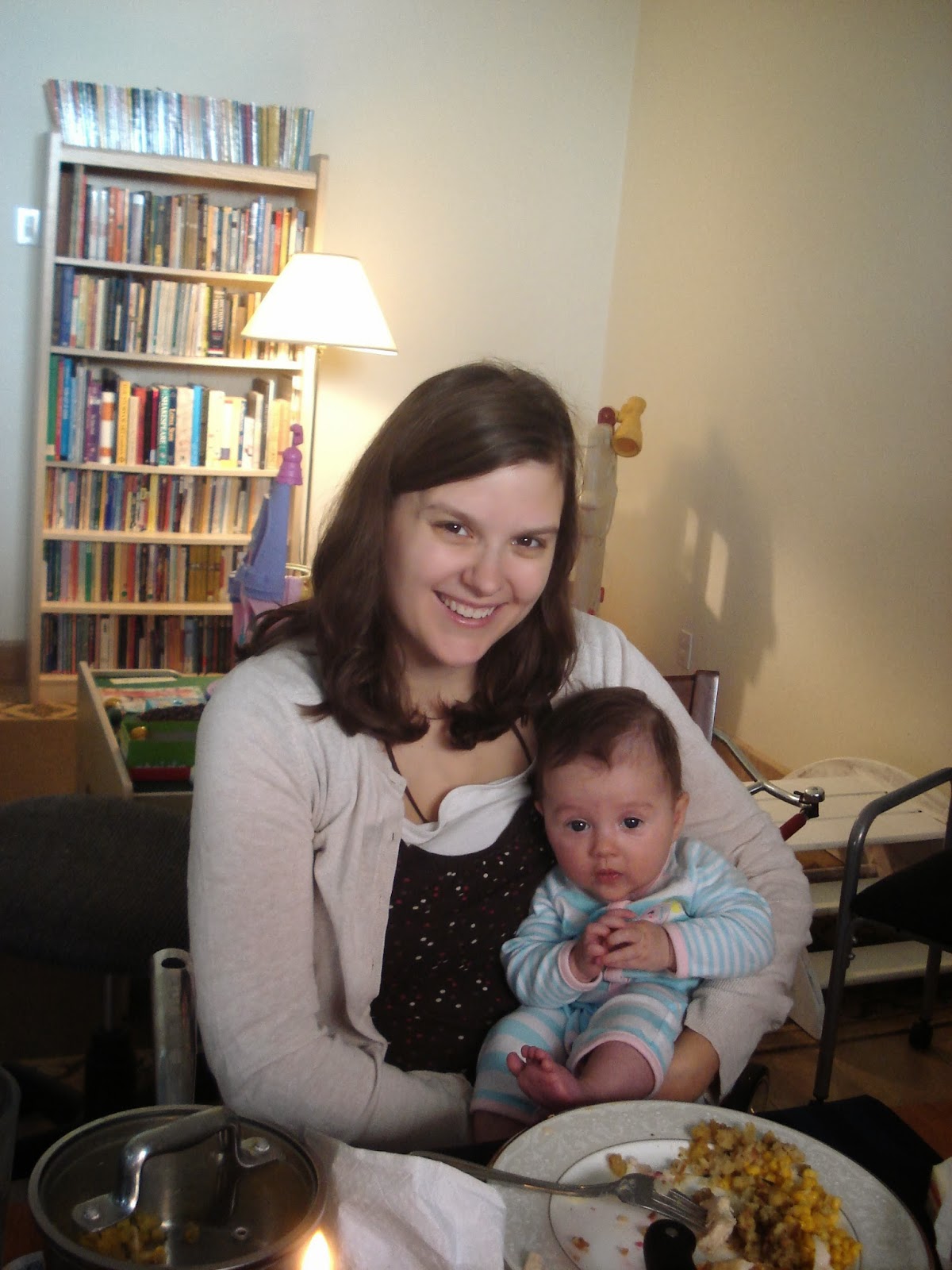 We had chicken, not turkey (there aren't that many mouths to feed yet in our family, and the two adult mouths aren't huge fans of turkey...and chicken was way cheaper!). It might have been less traditional but it was waaaay easier to cook, and we needed easy this year. The stuffing was instant. The corn was frozen. The cranberry sauce canned. The dinner rolls frozen. (Mashed potatoes were very yummy and were from scratch, as was the chicken.) It was so simple, mostly cooked by the Abbot, but it was so good. And the company was, truly, so good.

The past few days, I've been feeling really down and kind of bewailing all I've gone through in this past year. First being bedridden (just over a year ago!) with hyperemesis gravidarum, then being miserable with it for eight months, then the PPD and a refluxy baby, then the kidney stone drama, ending with surgery and a painful recovery. I have really felt overwhelmed by the non-stop challenges of the past year. I had a long talk with a friend a couple nights ago, and with the Abbot last night, about how I've felt like a Job this past year. But I think confessing that, confessing that I've struggled in my relationship with God in all of this, was a real breaking point. It was like the end of the book of Job, when God and Job finally have it out. Job is holding it in, and holding it in, and holding it in, and trying to be pious, but he finally just loses it, and then...that's when he finally really trust God. He has to let go, stop holding up pretenses, and let God be God and admit that he doesn't feel like trusting God. That's the turning point for Job, and I feel like it was for me, too. Today, I have felt so much more hope...hope that maybe, even if there are future trials to endure (and there might be, as there are still some things they're monitoring with my kidneys - prayers would be appreciated!) I don't have to live in a constant anxious, hopeless, state. I can have hope. I can let go.

And that's what I'm thankful for this year - the ability to finally let go and realize that, perfection or no, my family can enjoy holidays and special days together. It's a huge grace that God has given me, one that I'm still growing in to. I have been so humbled this past year by my inability to do the things I want to do - by being physically incapable of so much. But, I am also learning to be humble. It's so hard. And I don't like it one bit. But...that humility is something. It's something I'm able to take away from this very, very challenging year.

Oh, that and the world's cutest baby... 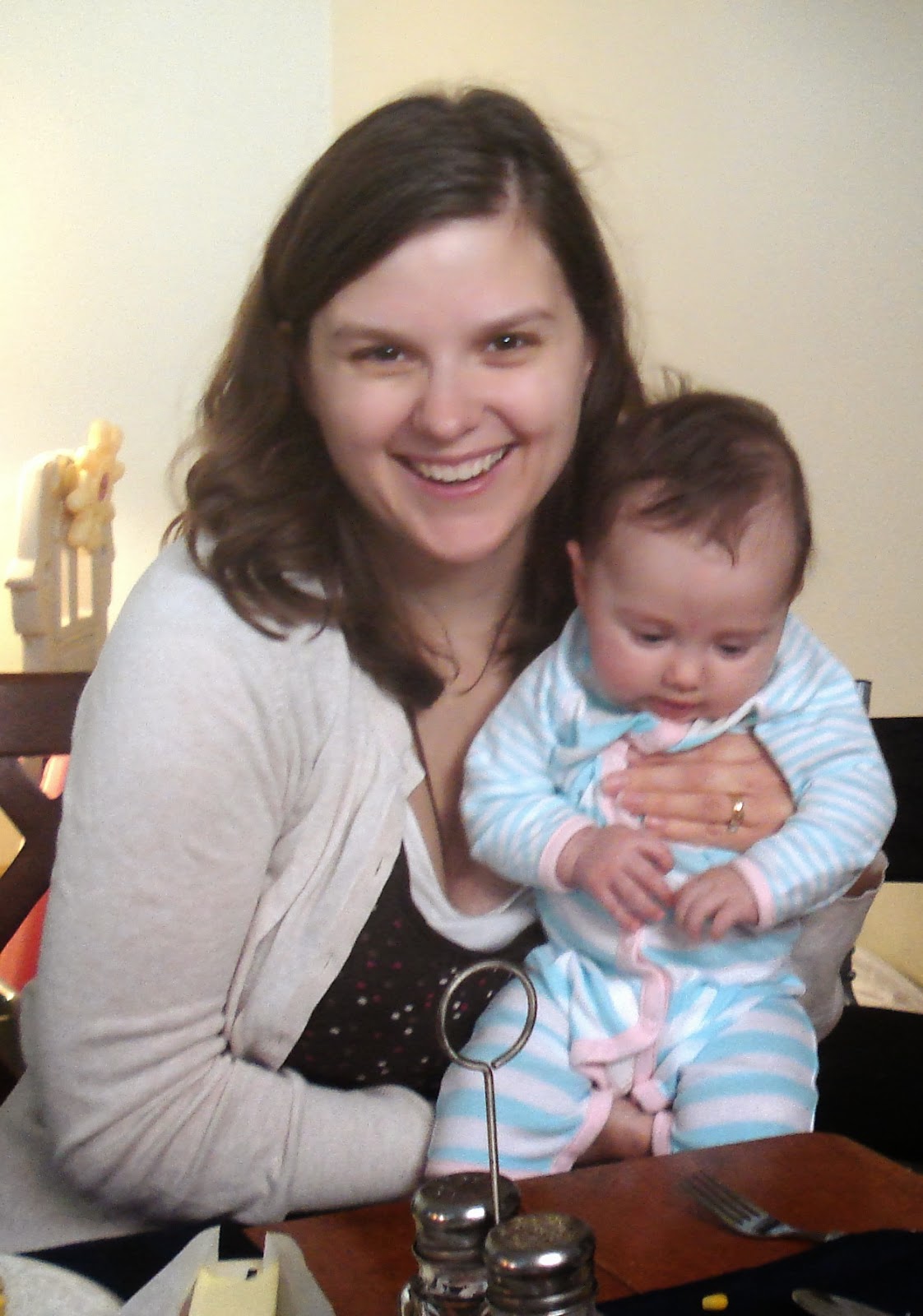 ...and, p.s., please, please pray for Rosie and her family in this incredibly difficult time!