Linking up with the lovely Jen, as always!! I'm so jealous that she has some new Dominicans in her neck of the woods!!!

This post brought to you by the Abbot, who is kindly watching the girls while I sit at Panera ALONE.
A-L-O-N-E. I know. Pretty amazing, huh?

Poor Sister Stinky had her first nightmare this week. (Well, at least the first nightmare she was able to remember and articulate to us.) She had been finishing up a stint sleeping in her crib mattress on her floor, rather than her big bed, in an attempt to help her get out of bed and get to the bathroom before an "uh-oh." Her mattress is right under then fan. (This is crucial to the story.) So, she woke up screaming in the wee hours of the morning, the Abbot took her to the bathroom, she briefly returned to her room, and then claimed she had to go to the bathroom again.

She stayed there for an hour. Just sitting on her little pink potty. She told me that she wanted to stay in there because it was "safe."

I went back to her room during this stretch, to wait for her to follow me...and woke up half an hour later realizing she hadn't. The Abbot had told me she had had some kind of bad dream, so I knew she was feeling scared. Thankfully, when I went back to her she was so exhausted that she let me scoop her up and tuck her back in.

So, the next day she was terrified of being in her room. When I took the girls in there to get dressed for the day she kept saying, "Let's go now, Mommy." She didn't want to say her prayers or read her bedtime story in her room, either, and was in tears when we tried to get her to lay in bed. Poor girl! We assured her it was okay to feel scared, but that we wanted to help her not be scared. So, with coaxing, we convinced her to tell us what she was scared of.

(We actually knew her dream had something to do with the fan talking at this point, but we played dumb.)

"What scared you about the fan?"

"It talked to you! That's silly. What did it say?"

So, after Daddy scolded the fan, we invited her to imagine a different version of her dream.

"What would be a funny thing for the fan to say?"

Thankfully she woke up nightmare free the next day.

Okay, I've got to be honest...there's an embarrassing part to this story. The Abbot and I were so intent on getting her to face her fears that we dismissed her requests to, "Go potty! Potty, Mommy! Potty!" as just being her usual stalling method (or an excuse to leave her room so she wouldn't have to face sleeping in her bed). I had the Abbot bring her potty in her room, and told her she could go there (so we didn't have a repeat of the "Potty hour" we'd had the night before). She refused but kept insisting she needed to go (even though she had just gone before we tucked her in). The Abbot and I kind of rolled our eyes, but finally conceded, anticipating a battle when we tried to get her off the toilet.

"She just doesn't want to be in her bed. You need to stay in bed, sweetheart. You don't need to be afraid."

She sat on the potty. And, let's just say...she really had to go. We were feeling like the novices we are at that point. Laughter was shared all around and she quickly fell asleep after that.

A week ago today, we were able to attend the funeral of dear Renee. It was just a simple memorial service, but it was truly beautiful. All of her housemates were in attendance (all individuals with moderate to severe cerebral palsy or other moderate to severe disabilities). An episcopal priest who lives on the campus presided over the service, and his reflection was beautiful. The music was perfect, led by the beautiful couple that was such an inspiration to me when I worked there, and it definitely brought tears to my eyes. Please continue to pray for the repose of her soul...but I have the feeling that a woman who suffered that much and who still loved God and others so very much will probably have little to no purgatory time.

I often forget how much those dear ones suffer every day...and yet still they care so much about those in their lives. Such an example to me!

The best part of the trip was getting to see two of my dearest friends, also residents there, and get to introduce them to Sister Nugget and show them how much Sister Stinky has grown!! 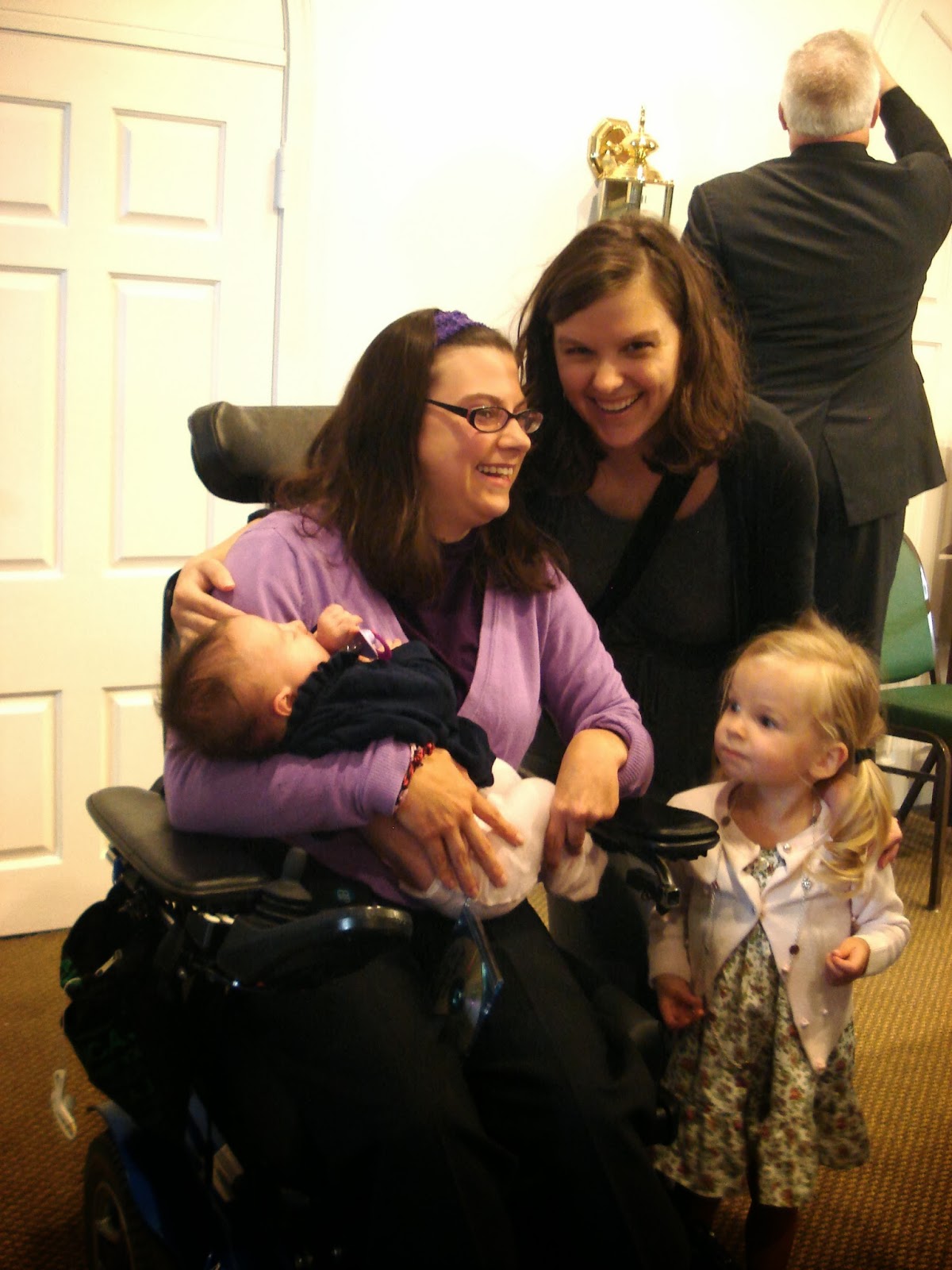 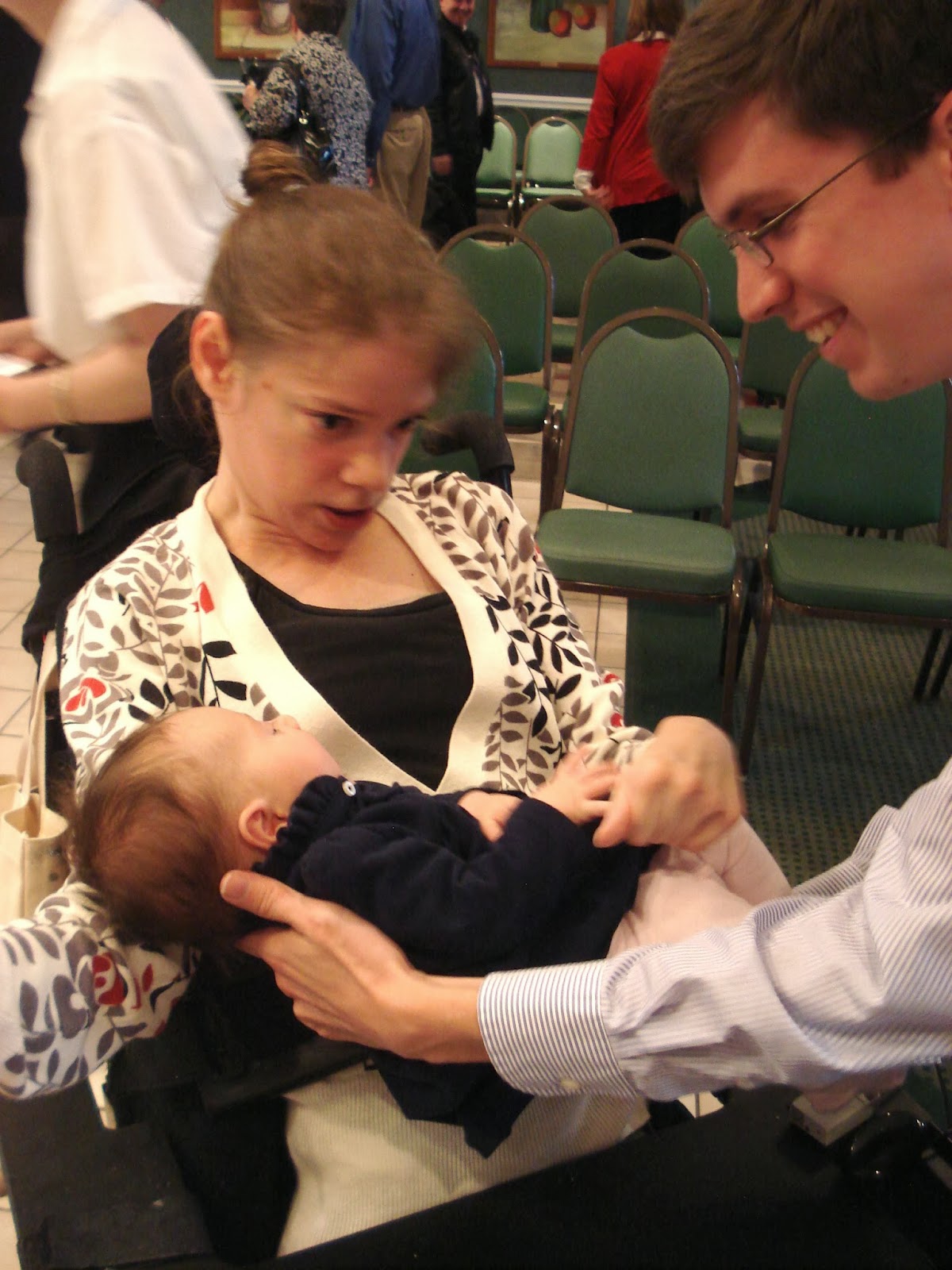 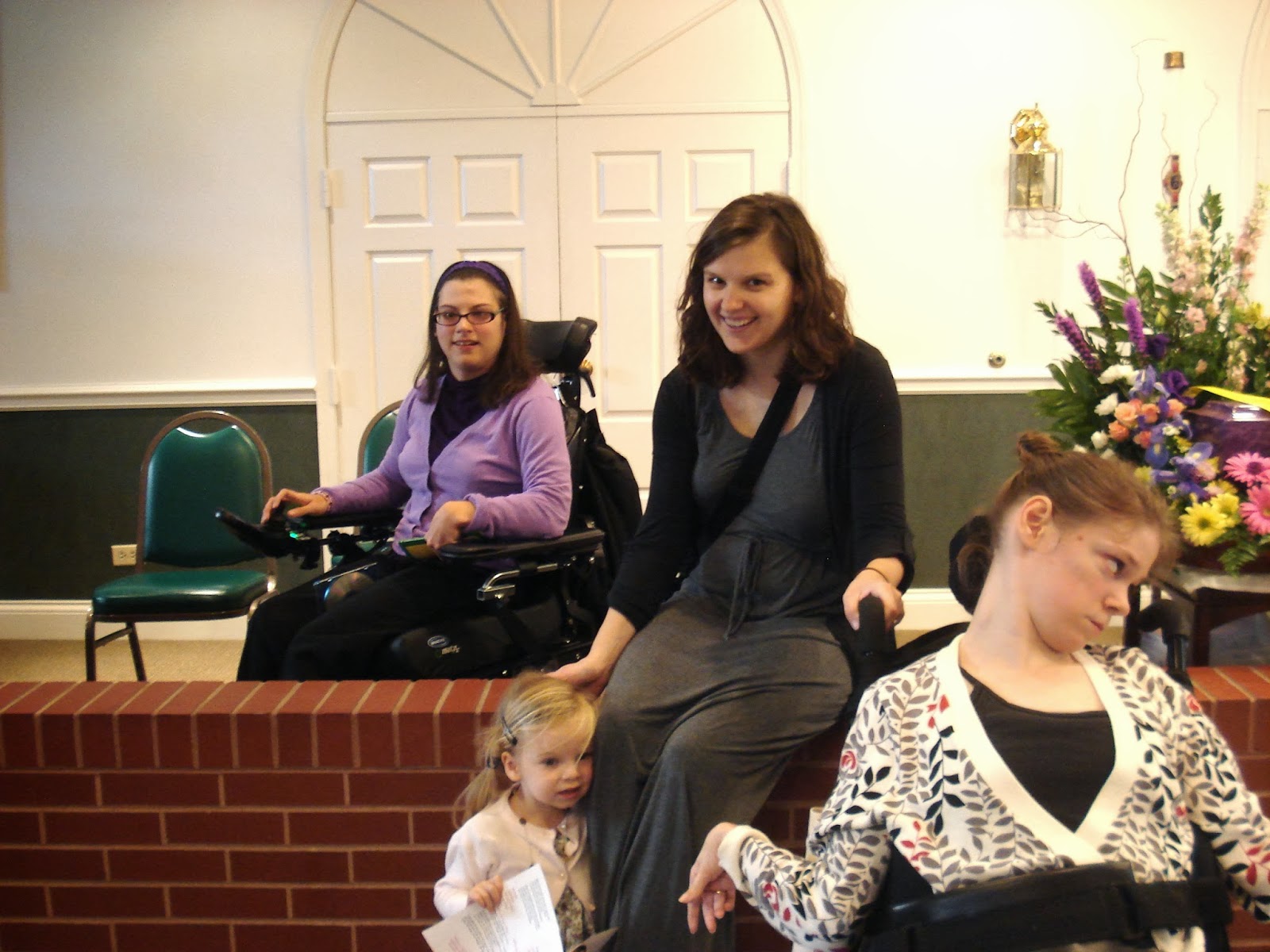 This two ladies are awesome! They are beautiful inside and out and such a gift in my life. :-)

They also were both in our wedding (one as a bridesmaid and one singing and signing in the choir), and there's just something so special about sharing your children with those who were there on the day your family was born, don't you think?