Sister Nugget is now just about a month old...and it's high time for a birth story!

So, those of you who have been following the blog know what the end of pregnancy was like - enduring the 8th month of hyperemesis nausea was combined with a (thankfully) milder case of prodromal labor. (After experiencing a mild case of it I deeply pity women who experience intense non-stop prodromal labor for weeks on end!)

Thursday, July 25, I woke up with the same old symptoms. I was so tired of the nausea and contractions, and I just needed to get out of the house. The Abbot graciously kicked me out for a few hours so I could get some alone time, and I hit up a local children's consignment sale and daily Mass in that time. As the day wore on, I couldn't help but notice how intense and constant my braxton hicks contractions were all day long. By the end of the day, the Abbot suggested we all get out of the house together, and we decided to go hiking at our favorite nature center. At this point, I began to wonder if I was in early labor but tried to put the idea out of my mind and didn't tell the Abbot anything other than that I was having tons of braxton hicks.

We hiked the shortest and the longest trails - extremely hilly and gorgeous trails - and the braxton hicks continued strong. We headed home for a quiet evening together, put Sister Stinky to bed, and had a great heart-to-heart conversation about some of my worries going into my second labor/childbirth/postpartum experience. We watched some Dr. Who, said our prayers together, and the Abbot went back to his home office to work some more while I tried to go to sleep.

At this point, it was about ten o'clock. My braxton hicks were getting more intense, but nothing too unusual. I answered some e-mails and tried to settle down to go to sleep.

But, by 10:30 p.m. (i.e. within the span of about a half hour) I was feeling really uncomfortable. I couldn't settle down, but I wasn't sure that what I was having was more than braxton hicks or more prodromal labor. I let the Abbot know what was going on, and decided to time my "braxton hicks." They actually were about 3-5 minutes apart, if I remember correctly, and were getting more intense.

At this point, I started thinking this could actually be labor. I told the Abbot to let our friends (who would be watching Sister Stinky) know what was going on, so that one of them could be ready to head over if it turned out to be the real thing. In between the Abbot trying to text them, I started getting real contractions. I was trying to breathe through them on the couch, with the Abbot talking me through them, and giving me some counter-pressure on my back. After snapping at him several times, he started realizing this really might be labor and timed the contractions. They were even closer together, and many of them were double-peaked. It almost reminded me of transition contractions...but I'd only been in labor for an hour...surely I wasn't in transition?!

At this point it was about 11:30, and I was beginning to realize that I probably shouldn't ride it out at home too much longer. The contractions were much more intense than I remember them being with Sister Stinky, and I began trying to convince the Abbot that this was the case.

As midnight approached, the poor guy became the victim of "I-don't-want-to-go-to-the-hospital-for-a-second-false-alarm" and "I-don't-want-to-go-through-a-second-long-hospital-labor-and-delivery" syndromes. I, however, was being to wonder if I was actually experiencing a little thing called transition. I told the Abbot in no uncertain terms that we were going to leave as soon as our friend arrived to watch Sister Stinky. I was in the car as soon as she arrived.

He got me a wheelchair and (after several stops on the way to the elevator due to more intense contractions) we made it up to triage.

Here's where my favorite part of the story begins - the million and one ways that God provided for us during the labor.

First of all, when we got into triage, and I sat there wailing and moaning through contractions while the nurses huddled around me, all of a sudden I saw - the kind nurse who was so encouraging when I had my false alarm during the weekend! She was, once again, extremely gentle and kind, and hurried us through the check-in process so that I could settle into a bed. This time, when she checked me, she was happy to announce, "I'd say 6-7 cm." I was in disbelief. "Wait...does that mean I really am already in transition?" "Yes!" she confirmed.

(A bit of background...I had some IV narcotics during my previous labor during transition, because I was absolutely exhausted at that point and wasn't dilating any more because I couldn't relax. So I was really worried about whether or not I would be able to get through transition unmedicated this time.)

I was so relieved that not only did I have a wonderful nurse by my side, but she confirmed that I was already doing what I was so afraid of - making it through transition!

The doctor on call came into the room and told me, "We're about out of the window for pain medicine...would you like iv medication to help?" I thought about it for a second, but I reasoned that labor was going so quickly I would just push through and get it over with. "Nah," I said. "Let's just do this!" The nurse laughed, "I love it! Let's just do this!"

At this point, I also realized that it was after midnight - the feast of St. Joachim and Anne. Not only are these two the grandparents of Jesus, and the patron saint of grandparents - St. Anne is also the patron saint of women in labor. I couldn't have planned the date of my labor better if I had tried! I knew that I was in good hands, with dear St. Anne praying for me. :-)

After this, the next two hours were a complete blur. By 1:00 a.m., I was settled in my labor and delivery room, in disbelief that my labor was going so quickly! Our beloved Catholic ob/gyn was frantically texting the Abbot back and forth as he raced across the county from one hospital to another. "Is she still in labor?" "I'm almost there! 15 more minutes! Tell her to hang on!" "Okay, I'm in the parking garage. Is she still pregnant?" It was pretty crazy, but I was so happy and relieved when he walked in. He came in during a particularly long and painful contraction, and instantly took my hand (the Abbot hand his hands full supporting my shoulders). I didn't realize he was holding my hand and was squeezing away. His gentle presence was so soothing for me. When I finally opened my eyes (during a brief break between contractions), I gasped to him, "It's the feast of St. Anne and Joachim." "So it is!" He kept reminding me of that during the rest of labor and reminding me of their prayers.

During the next hour everyone around me was frantically making preparation for Sister Nugget's birth imminent birth. When they broke my water, they found a trace of meconium and so NICU nurse was paged (Sister Nugget ended up being perfectly fine). Before I knew it, I was beginning to push.

Pushing took awhile, and it was much harder (although shorter) than with Sister Stinky. My doctor confirmed my suspicions that Sister Nugget was facing sideways, and that was slowing down the pushing process. He also told me, "There's a lot of dark hair!" (I thought he was just saying that to encourage me.) 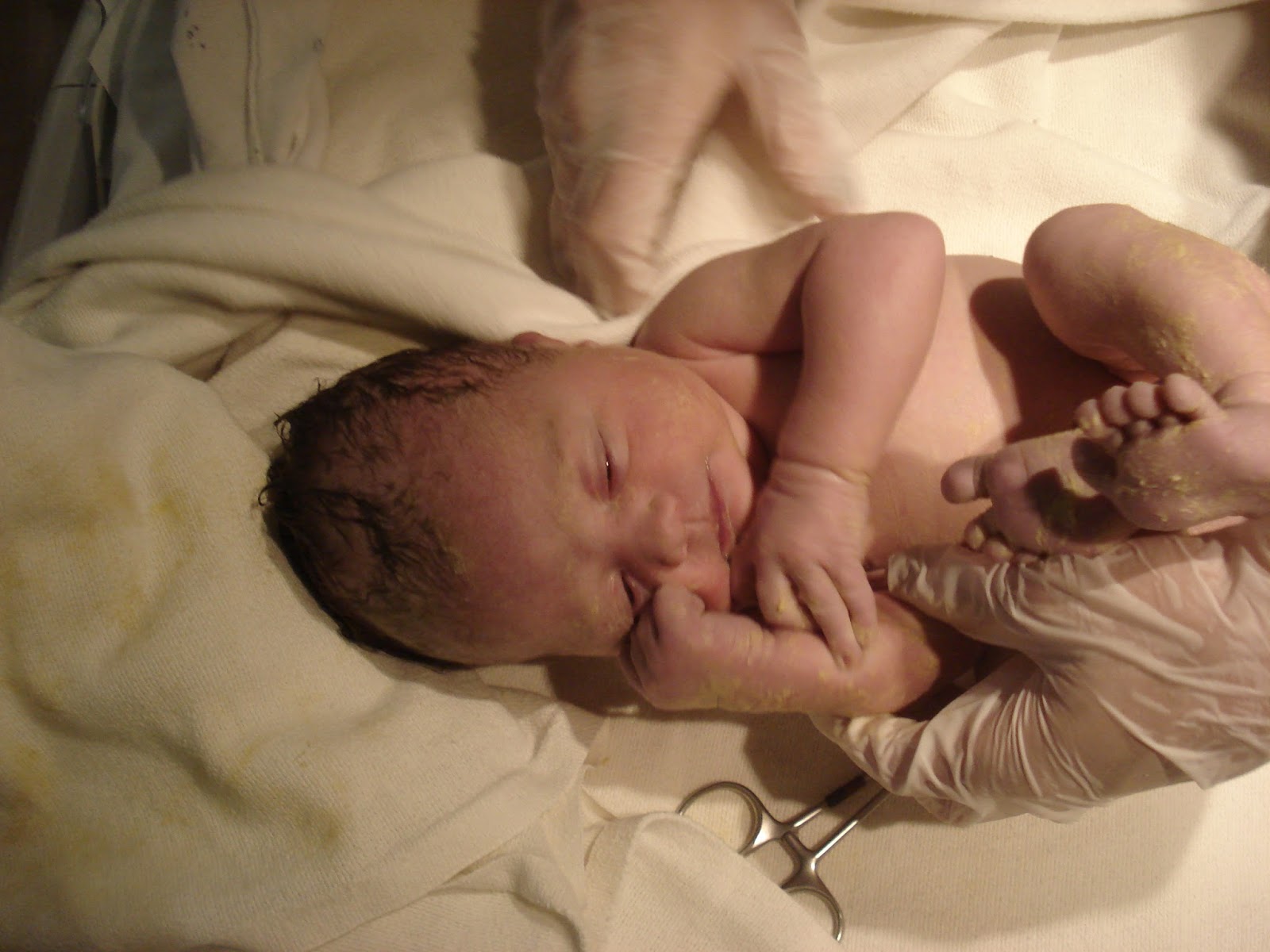 As my ob aptly wrote on her hospital certificate, she was (and is) a beautiful work of God. 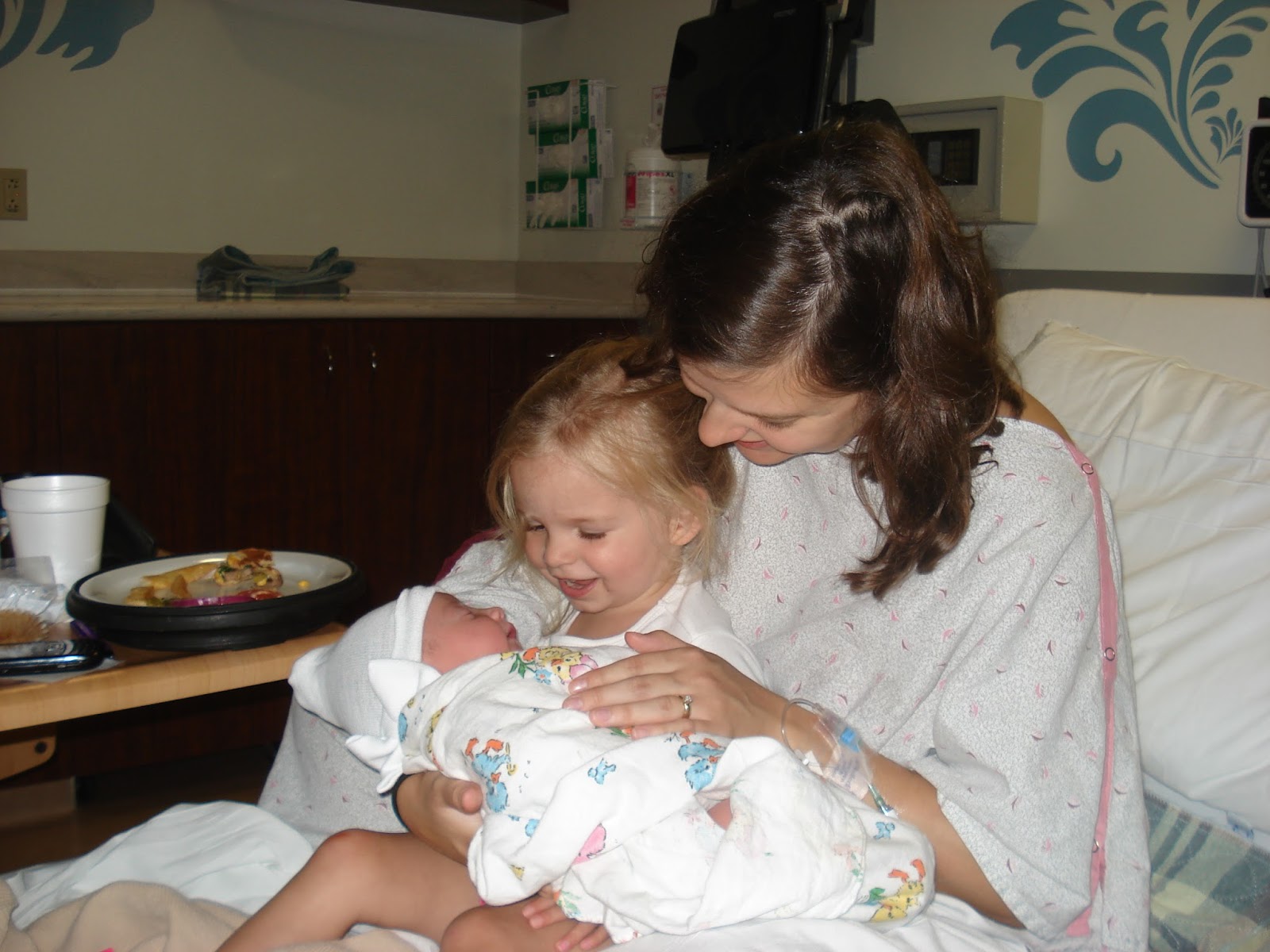 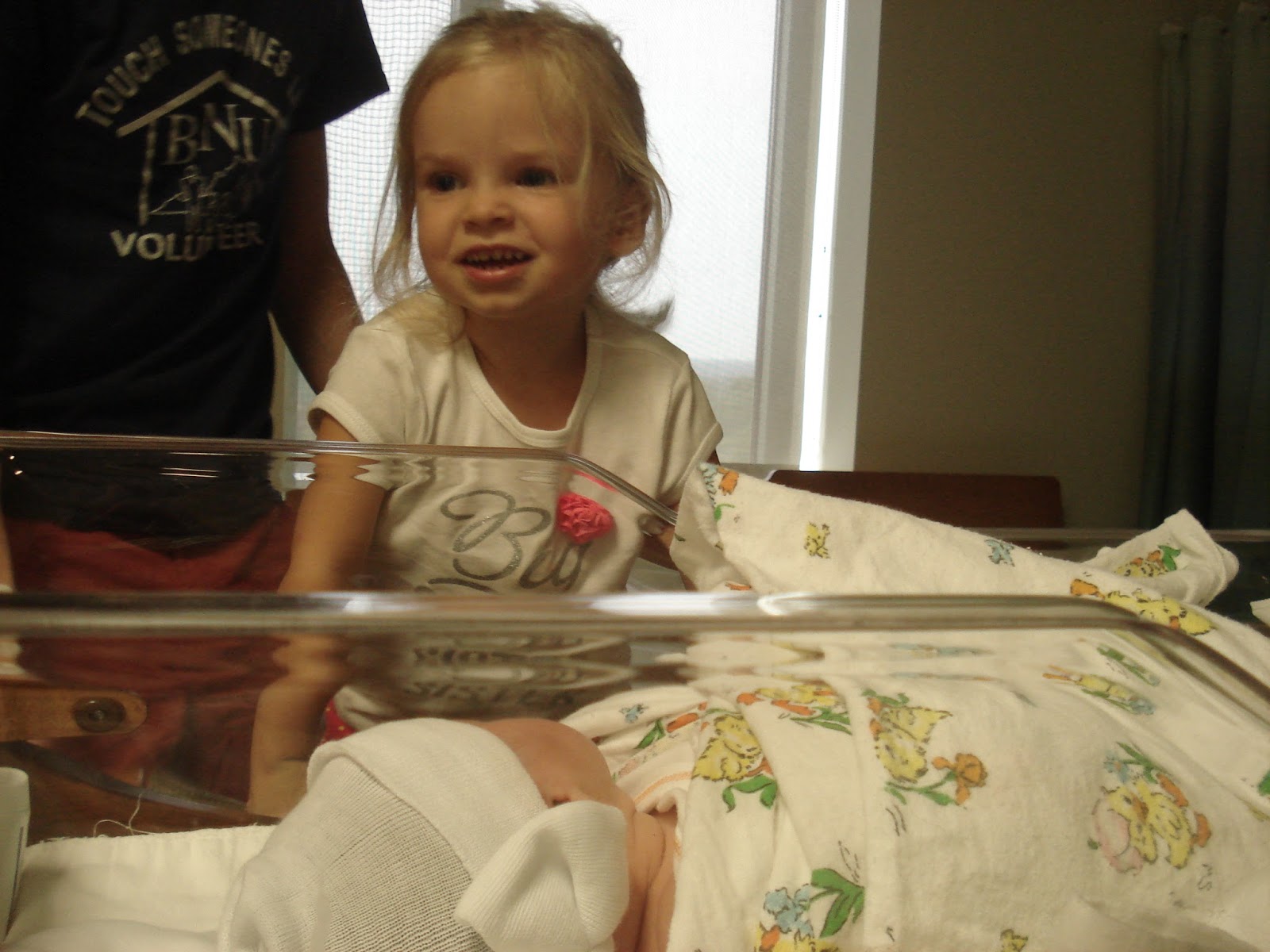 Unlike with my first, this little girl got to room in with me...and it made a world of difference! I actually went home feeling like I knew this new little person. It also meant me got to take lots of snuggly naps together while in the hospital, and form a deep bond from the start. That early bonding has made a huge difference for this post-partum period.

Praise God for the gift of another little one. :-)