Okay, sooooo...baby #2 is almost finished cooking here, and it's about time that you hear the story of the entrance of our beloved Stinky into the outside world...

It was early in the morning of Thursday, October 21. Still just under a week until my due date with my little Stinky, and I felt really crampy. Actually, it felt like more than cramps...it felt like actual labor contractions.

(Just as a side note...I was so pumped to have a baby in October because of all the AMAZING FEAST DAYS and was pretty bummed when I realized that October 21 was just a day in Ordinary time.)

Now, I'd been spending weeks sitting at my desk at work timing braxton hicks contractions like a fool, just so. desperately. wanting. labor. to. start. (Months of nausea and a desk job will do that to you.) But this morning, I knew...we ain't got no braxton hicks here. This is the real deal!

I told the Abbot and we timed them. They seemed pretty close together and were definitely painful, and we wondered if we should call the doctor! The Abbot hopped in the shower and I sat in bed hoping that I'd get to call in to work and tell them I'd started labor!!! But, all too quickly, the contractions spaced out. They were still too uncomfortable to consider driving all the way to work, sitting through Mass and a staff meeting, followed by another meeting and some quality desk time...so I opted to work from home that morning. (No, I wasn't very productive. But yes, that did mean I'd get an extra day of maternity leave!)

I sat in the living room, gchatting some friends and asking for their prayers. My contractions still hurt, but they weren't close enough or regular enough to consider going into the hospital. I finished working for the day, and the Abbot and I decided to hang out, and walk around our semi-creepy neighborhood together. (It was generally pretty safe, as far as South Bend goes, but it just looked really, really sketchy.) It was a drizzly afternoon but darn it...I was going to keep walking and get those contractions to pick up!!!

Unfortunately, when we got home the contractions seemed even more spaced apart...but were still painful. Finally, around 4:30 or 5, I called the doctor's office before they closed, to get a second opinion. Was I in labor?

The nurse on the other end of the line didn't seem convinced. She said that it might be labor, but then again it might just be false labor, and I shouldn't get my hopes up. Um. You can imagine how much I loved this assessment of the situation. After I hung up, I started crying and kept telling the Abbot, "That's it! It has to be the real thing, because I am not going through this a second time for this child!" I sat down and frantically gchatted a friend of mine - who seriously has the most efficacious prayers of anyone I've ever met - and begged her to pray that the contractions would pick up.

A few hours later...and they had! They became really close together (though still a little irregular) and after getting the doctor's opinion...we were off to the hospital!!!

Thankfully, when we got there, I was already 4 cm. dilated and clearly in active labor. The Abbot's worst fears of rejection and the walk of shame back to our car were put at ease. We were staying!

We got to the hospital not long after 10pm, and we were checked in to a room by midnight. The Abbot popped in a Gilmore Girls dvd for me (great labor distraction and great way to befriend some nurses!) and e-mailed our closest friends and family to ask for prayers. We were sure we'd have a baby by morning! After all, I'd technically been in labor all day Thursday...

That night the delivery wing was particularly busy...and my labor happened to be going slower than most of the mamas in there! So, I was mainly alone (save the Abbot, the Gilmore Girls, and the saints praying for us!) during the night, with only an occasional nurse popping in. For a few tense hours in the wee hours of morning, I had some intense contractions - like, very long and with double peaks and very close together. I was convinced I was in transition. But, after getting checked for progress, it was determined that I wasn't far enough along to be in transition yet.

Then, God smiled on me and sent me the world's most wonderful labor and delivery nurse. Leslie started her shift around the time the sun was rising, and she made all the difference for me!

Note: bear in mind that Leslie was a nurse in a non-Catholic hospital, and that I was super bummed originally that I couldn't deliver at the Catholic hospital in town because of insurance reasons!

By 6am or so, I had had some painful hours of contractions, and was making little progress, so I decided to try the labor tub in my room. (Soooo sad that the hospital I'll be delivering Baby Sister at doesn't have these!) Leslie helped me transition into the tub, and encouraged me to leave on my scapular, saying, "You'd probably like to leave this on!" That's when I knew I'd love her :-)

While I was in the tub, I was able to relax and occasionally doze off. Leslie asked us what we were naming our daughter and when we told her she kept reminding me during the hardest contractions, "Don't forget...St. Therese is with you! Don't forget that!" After being in the tub awhile - and realizing it might be slowing down labor - we decided I should try getting out and sitting on the birthing ball. Leslie dimmed the lights for me, and draped a towel around my shoulders. As I sat there, she reminded me to keep in mind Jesus on the cross. And as I bounced through some contractions on the ball I can't describe it, but...I felt such peace. I wasn't really able to pray at all during labor (I offered up all future contractions when we were in the car on the way to the hospital and that was about it, prayer-wise!) but it was as if it didn't depend on me - I felt such peace because I could sense, deep down to the toes of my soul that God was with me. I felt sooo not alone - I felt Him with me the whole time!

Around this time, the doctor checked me and determined that my labor wasn't really progressing very well. (I think I had been stuck at 6 cm for hours at this point.) He knew I was trying to avoid an epidural and a c-section, so he suggested breaking my water to see if that helped move things along. At this point, it had been around 12 hours since I had first arrived at the hospital (after having contractions the whole day before) and I was exhausted. I agreed that that sounded like the least evasive course of action.

At first, the gush that came when he broke my water felt lovely and warm...but then the first contraction came. It was intense, and I was incredibly exhausted and began fighting it...not very helpful for progress! The sainted Leslie had me try a different position (at this point, we were thinking Sister Stinky was probably in a funny position and that was why labor was taking so long), but after she realized how exhausted and anxious I was becoming, and that I was not working with my contractions anymore -did I mention how exhausted I was at this point? - she suggested doing a half dose of IV narcotics. She assured me that it wouldn't take away the pain of the contractions, but it would take the edge off enough to allow me to not fight them so much. I agreed.

The medicine did it's trick - I still felt the pain of the contractions, alright, but I was able to relax for them instead of fighting them, and was even able to doze off between contractions a little (a blessing after being up the whole night before!). I felt loopy, but the medicine wore off by the time I was ready to push, around 3-4 hours later. Pushing was so intense, and I yelled my head off and yelled at the doctor, like any good laboring mama should ;-)

When she started crowning, good doctor that he was, he helped stretch me so that I wouldn't tear (and thankfully, I actually only ended up with a small internal tear). It was incredibly uncomfortable though, so I wasn't happy, and I let him know it...
"What are YOU DOING?!"

But then, I remember, as if in a dream...seeing her little head and shoulders. Seeing my baby. My little sweetheart. She was here!

My sweet little girl must have been taking her time for a reason. She was born at the hour of mercy (i.e. 3:00 p.m. on a Friday afternoon!). What a true grace! 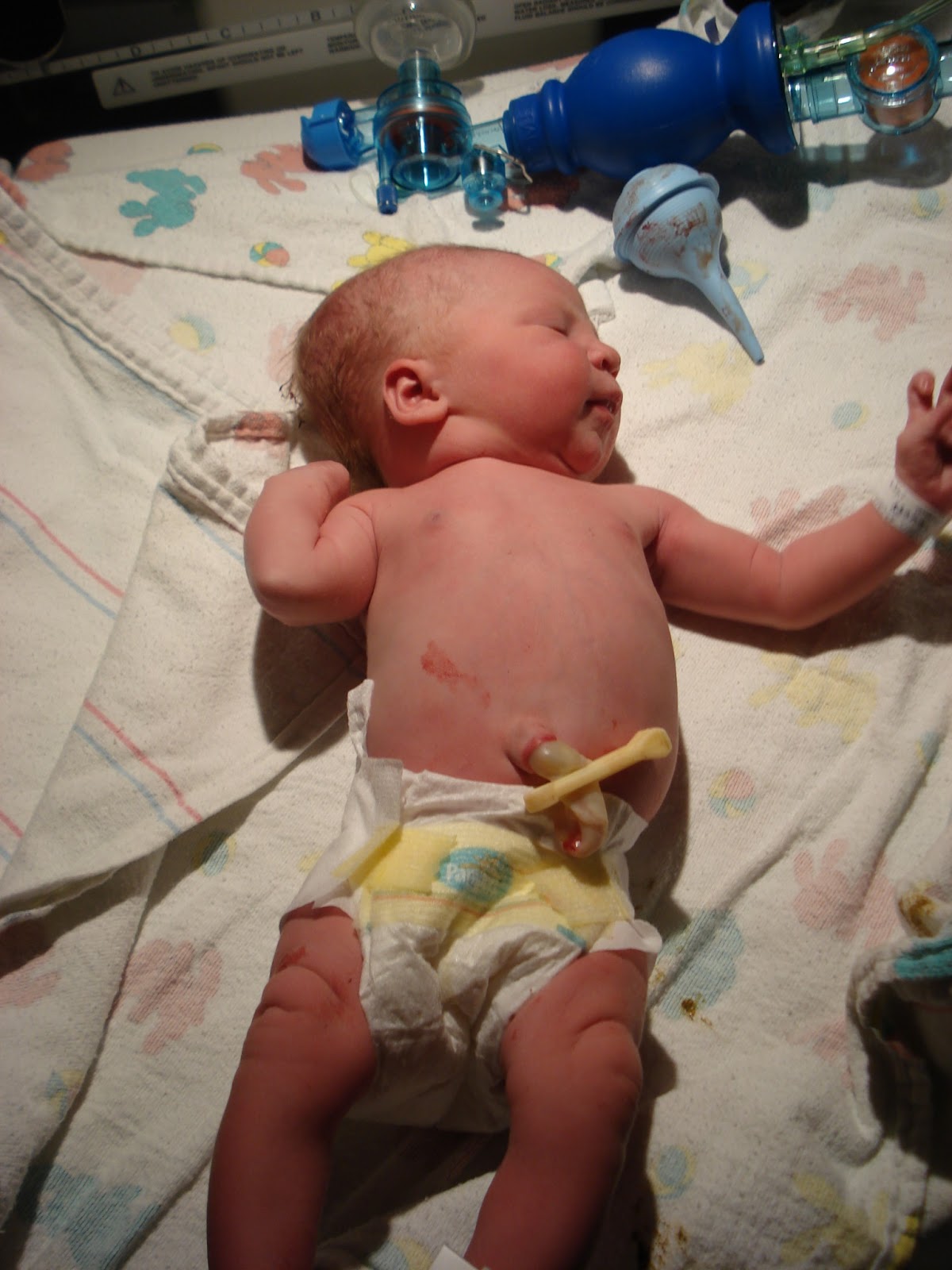 They cleaned her up and sunctioned some of her mucus out so she could cry, and then they brought her to me. She laid on my bare chest, wearing only her birthday suit. It was love at first sight! I felt so incredibly happy and at peace (interrupted only briefly by the doctor helping me deliver the placenta...I was sure to give him an earful about that, too, haha). Proving her love for "nilk" early, she latched on and wouldn't let go! (That became the theme of her life for the next two years, haha!) As she nursed, I felt something warm trickle down my side, which we would later discover - when the nurse pulled back my covers - was her first bowel movement, all over her mommy. But did I mention it was love at first sight??? I totally didn't care. 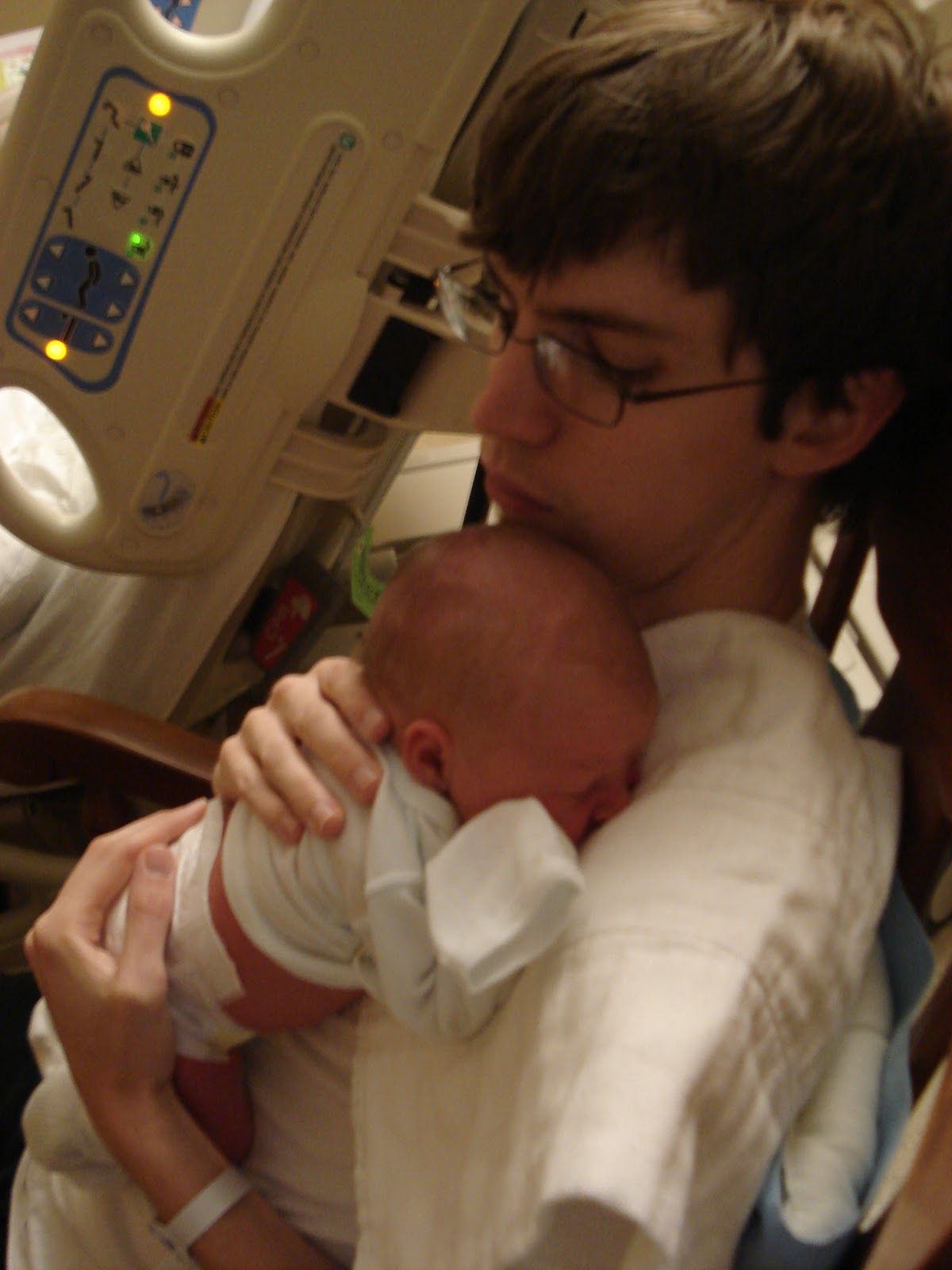 The doctor and the nurses stepped out for a bit, and we had our first moments alone together, as an ex-utero family. Sister Stinky looked up at us with bright eyes, and the Abbot and I couldn't stop exclaiming about how she was the most beautiful baby we had ever seen. Then, we sang together the song we had sung to her each night in utero - the Salve Regina. Her eyes looked even more intently at us. She knew our voices! She recognized the song! The Latin words of that precious sung prayer washed over the three of us, and with it, the peace of knowing that God had led us to that moment. It was a perfect beginning for our new family. :-) 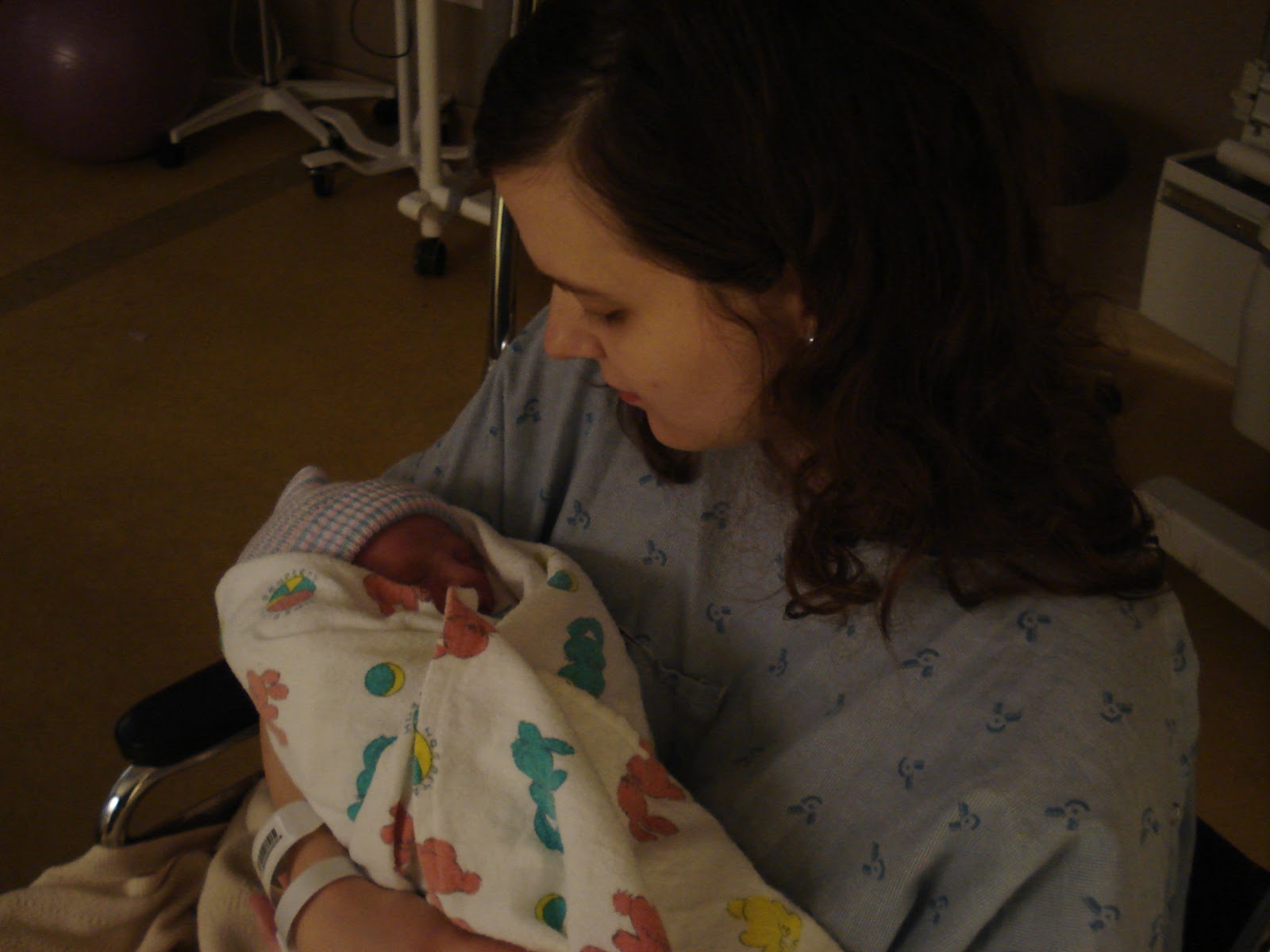 And that, friends, is the story of how we were blessed with our Sister Stinky. :-)
Email Post
Labels: birth story Communion of Saints Sister Stinky