My Vocation is Love! - Part I

(Yes, that is a quote from St. Therese. She factors in to this story in a big way, multiple times.)

So it seems like telling the story of how you met your husband is THE thing to do these days! And, as I bide my time and wait for Baby Sister to make her appearance, I might as well be productive.

I had long wondered what my vocation would be. Alot of people kind of assumed that I would be a nun or a religious sister when I was growing up. At different intervals, I assumed the same. I mean, I loved God and longed for Him so much...I couldn't possibly be called to something boring and ordinary like marriage could I???

But I loved boys. My dad (who obviously was called to marriage, but who attended minor seminary in high school) used to always tell the story of Polish-raised father's reaction to his own declaration that he wanted to be a priest. (My dad was every bit as girl crazy as I was boy crazy.) He'd say, "Peter, you are going to be a priest, like I am going to be a bishop!" (My grandpa, for the record, was not a bishop.) His point being...we can all see where God is calling you!

I dated on and off over the years, and by the end of Sophomore year of college, I had discerned in my heart that God was probably calling me to marriage and I had my sight set on a particular guy. (Not the Abbot.) At the same time, the Abbot was admiring me each week from across a lecture hall...while I admired this other guy. Ha.

Things kinda floundered with this other young man, though. He was nice, but it quickly became apparent that we weren't meant for each other. He tried to gently let me down but went about it too gently, and left me wondering the whole summer...

Fast forward to my first night back in my dorm. I was watching EWTN while I unpacked, and one of the shows I was watching was talking about discerning who your spouse would be, and suggested writing out a list of non-negotiables that you needed in a spouse, and then just giving over the list to God.

Being open to suggestion, I gathered up my prayer journal and headed straight on down to my dorm chapel. I said a prayer and began writing out this list. In my mind, it described a guy who would be an impossibly good match for me, and was also totally different than any guy I'd ever dated before (including my interest of the former spring). I handed it over to God, trusted that I could do without a guy for the time being, and went on with life.

My student job was working for Campus Ministry, and the first time I met the Abbot was through that job...although I have no memory of that first meeting. I was working our annual open house, and evidently he came with his roommate (who I knew from a class the previous spring and who I found annoying to no end at the time), who introduced us.

I don't recall that encounter, but I slowly started noticing the Abbot in a class we took together about the Theology of the Mass, taught by one of our favorite professors. The Abbot sat behind me with his roommate and they tried to get my attention by...are you ready for this?...talking loudly about heretics and the heresy a former professor of mine used to tease me of being guilty of. (I am not a heretic, for the record, but evidently this is how theology majors resort to picking up girls?) I probably ignored them for the most part, but over time started making conversation with them because I realized something...the Abbot was kinda cute.

We begin talking to each other before or after class, and soon I noticed that he and his roommate happened to have a Eucharistic adoration slot every week during one of my Campus Ministry shifts. (I used to stop in the chapel before starting my shift and the sight of that little brown-haired cutie kneeling and praying his rosary got me every time!) He and his roommate used to wave at me sometimes, as the left adoration and walked back to their dorm.

One day, the Abbot came back...SANS roommate. I was shocked because I'd never seen them apart. A friend of mine was sitting in the office with me studying while I finished my shift, while he came in with the following pick-up line.

"So, I noticed on facebook that you have done a lot of work with disabled people. And, I was wondering if you wanted to get together and talk about that some more." There he stood, in all his awkward nervousness, and I scarcely noticed because I just thought he was so cute and was surprised that a guy I liked seemed to actually like me in return. I agreed, and he left. My friend (who had just spent an entire summer with me working with people with disabilities at an amazing residential facility and never let him live down the awkwardness and non-PCness of this first encounter) turned to me and said, "Awww...that was so cute. Did you see how much he likes you?" I hadn't told anyone about my crush on the Abbot so I was super excited that she confirmed for me that my feelings appeared to be reciprocated.

The day before Fall break, he and I had our "coffee date" together, and talked about my experience working with people with disabilities. We sat shivering by one of the lakes on campus, and just when I was afraid that he really was more interested in my ministry than he was in me, our conversation shifted to other topics. We started talking about ourselves, and getting to know each other. After a long, pleasant walk, we hugged good-bye in front of my dorm and agreed to hang out again at some point. When I came back in to the dorm, all my friends asked me how my walk had gone and I responded, "I have never felt so...respected."

Romantic, I know? But he was just different from the other guys I had known. I couldn't put my finger on it, but there was something more to him.

A couple weeks later, I invited he and his roommate to our dorm's All Saint's Day Mass. Our beloved Australian priest had jokingly made the suggestion that we come dressed as saints my freshman year at ND, and it had become a tradition to do so in our dorm.

He came dressed as my patron saint, who also happened to be one of his favorite saints. 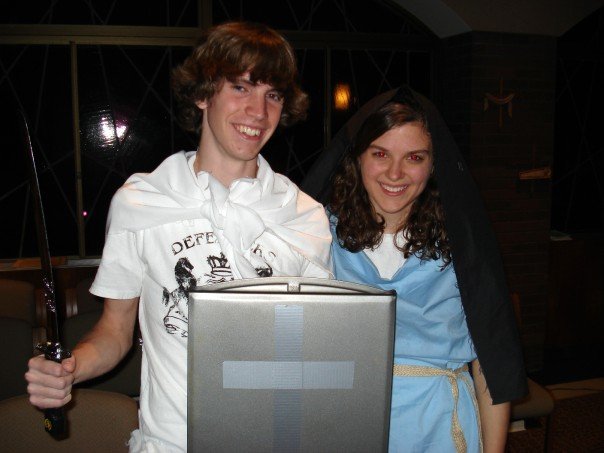 A few weeks later, while hanging out and talking in my dorm room, he popped the question, "Do you want to go out with me?"

Knowing that there was no way I was agreeing to be his girlfriend without going on an actual date, I played dumb and said, "Go out with you? You mean, like on a date? Sure!"

On November 11, on a Sunday evening, we went on our first date together - dinner at the dining hall and off campus to see the movie Bella. Have you seen it? Basically, the story of two people who come to their friendship with their own sets of baggage but somehow manage to lighten the other one's load a bit. An apt analogy for the relationship that was about to begin...