Linking up with Hallie and friends per my usual!

When I got a link to this article from Apartment therapy in my inbox the other day I thought...how perfect! I can write my five favorite things about living in a small house!!

As I've said before, our house is 800 some sq. ft. (and is probably even smaller because the kitchen takes up the whole downstairs and we do most of our living upstairs!). I've often told the Abbot how much I love living in a smaller house! I think out square footage is maybe about 100 less than the house we lived in when we first got married...I feel like we truly use every inch of it!!! 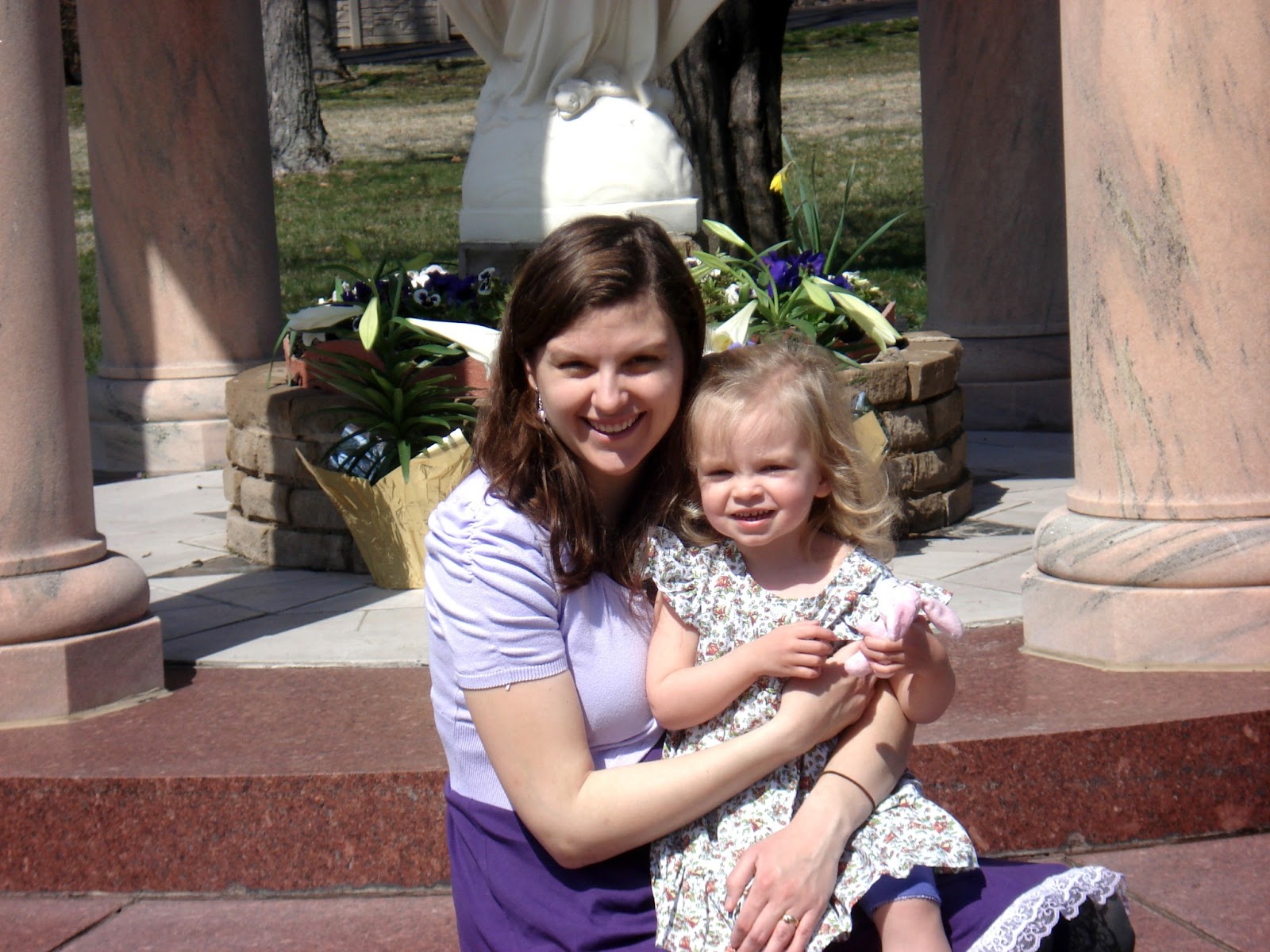 Small houses are perfect for raising small children and babies in!

Veeeeerrrry early this morning, I woke up to this little face nuzzling against mine, informing me, "I'm soaking wet!" (She was pretty damp...guessing she wet herself during the night at some point and didn't realize until she woke up.) The little sweetheart quietly rolled out of bed, walked down the hall, and woke her mommy up very nicely! (It definitely doesn't happen like that every morning...she and the Abbot don't roll out of bed excited that it's morning the way I do, haha!) Anyway, it was only a matter of a few steps to the bathroom to change her out of her wet clothes and let her use the potty for real, and a few more steps down the hall to her room to put on fresh pjs and change her sheets. Then, half an hour later, she pitter-pattered down the hall again and crawled into bed with me for a bit (which I didn't mind at all, because I wasn't falling back asleep anyway, and I'm just trying to soak up as many snuggles as I can with her before her sister is born). Half an hour of snuggling later, we walked the short distance from the Abbot's and my bedroom to the couch in the living room (which shares a wall with our room). When the Abbot woke up shortly thereafter, it was only a few steps from our bedroom to his home office (where he works most days, and which is the "spare bedroom" next to Stinky's room).

All in a matter of a few steps! As a mama in her third trimester, I can't tell you how amazing that is! So much energy conserved! Even when she was really little (Sister Stinky was only 8 months old when we moved into our current house) I could leave her alone in another room, because no matter where we are in the upstairs/main floor of our house she is never more than a few steps away! I have especially appreciated this after staying at my in-law's house (which is definitely bigger than ours and has the living area on a different floor than the bedrooms). I was so exhausted at the end of each day there, simply from climbing so many stairs and having to walk longer distances to the bathroom, kitchen, etc.! 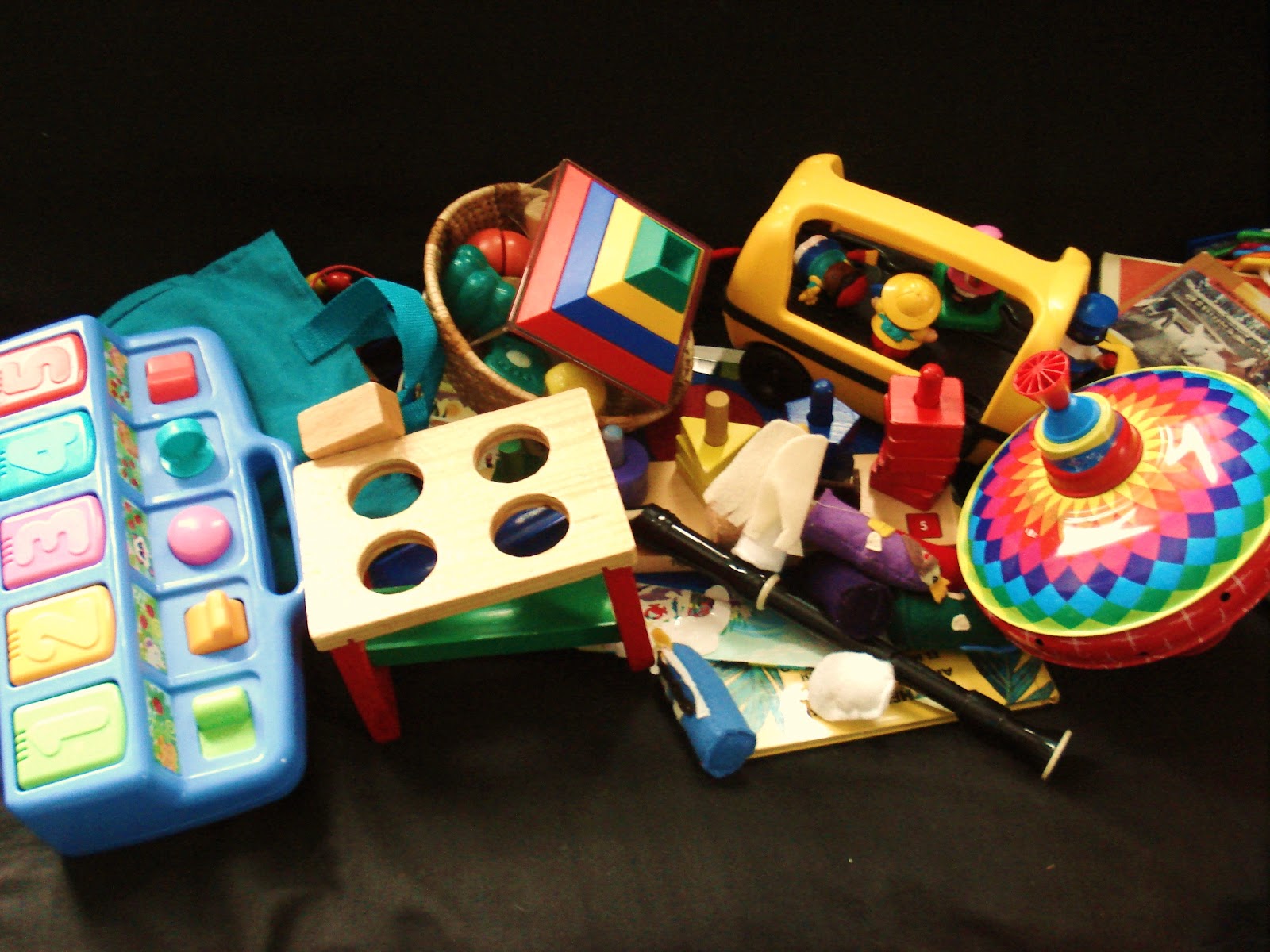 You have to learn detachment.

Before moving to our current home, I wasn't in any huge rush to purge things (although our belongings definitely would have benefited from a purging!) because we had plenty of space to store things. Also, most of the rooms were bigger in our old house (and we had more rooms period) so clutter just didn't show as readily. Not at all the case in this house! A little clutter makes the house feel messy, and I've been on an ongoing quest to purge all the things we don't use or need so that our home doesn't get too cluttered - and it is so freeing! The majority of my mental nesting list involved decluttering different areas of the house and I find it sooo satisfying! The blessing of this house is that it's forced me to become more detached from some things I otherwise would have held on to. Still not perfect at the whole detachment thing...but getting better! 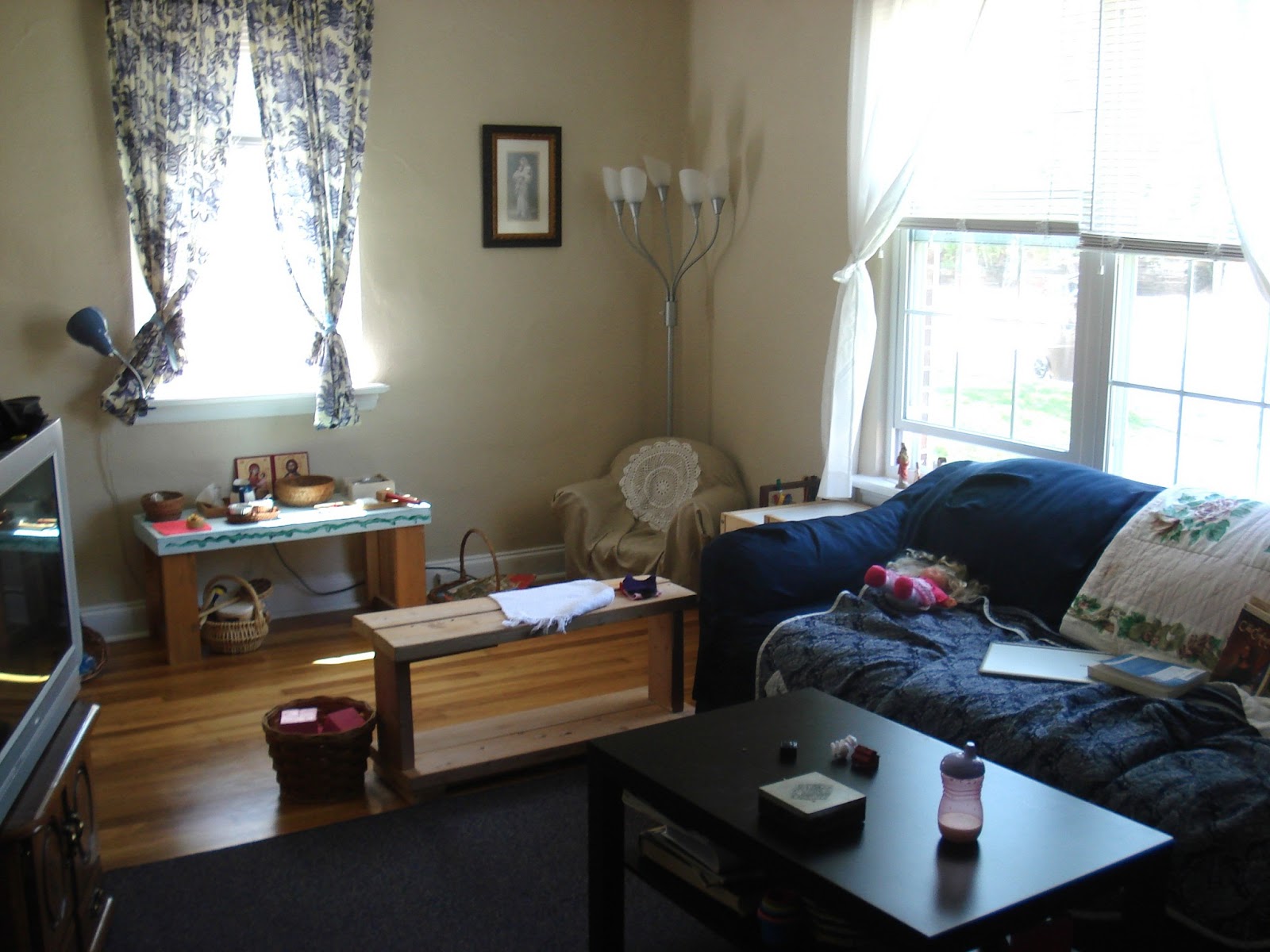 A place for everything, and everything in its place.

I look back on the home we lived in when we were first married/first became parents and I know I didn't use that space as well as I could have! I also know that if we still lived there, something like a homeschool space (or maybe even a whole homeschool room!) would have been easy to whip out, without having to re-arrange a thing! Not so in this house. It took alot of creativity and out-of the box thinking to manage our "preschool space" as well as a "family/living room" space in a very small front room! Now, getting ready for the birth of the fourth member of our family, we're continuing to have to be super creative. Our bedroom is pretty small, but already I'm brainstorming ways to de-clutter and re-organize so that Baby Sister's bassinet can fit in there, and maybe even one of our rockers!

Our small little house has forced me to find a good place for everything, and to do the best I can to return things to the place where they belong. I feel like I've had to be so much more creative, living in a small house, but I also feel like have a lot more space than I actually do, just because I've learned to use it well! 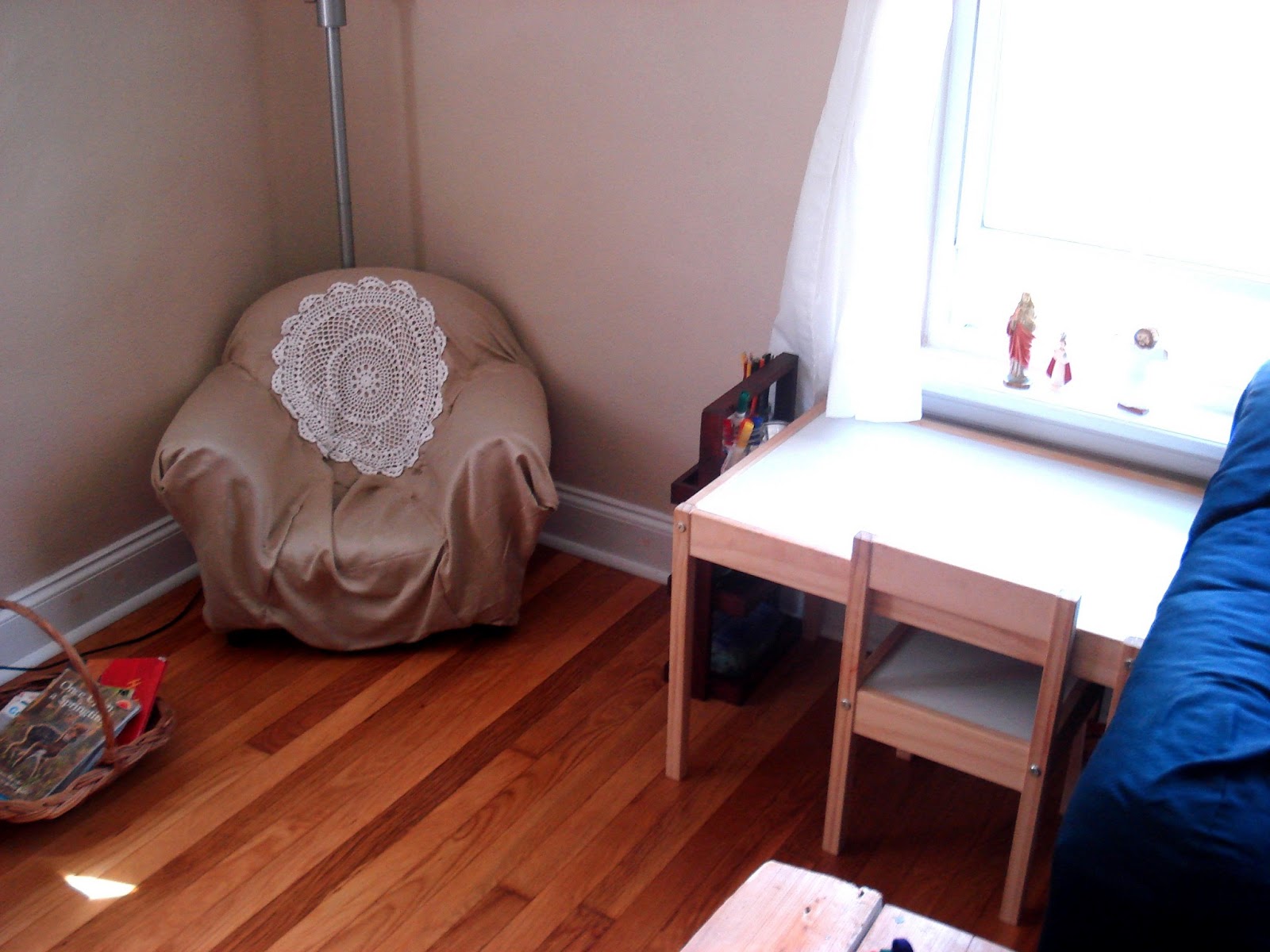 Back in our old house, we mainly cleaned when we had overnight guests (which was pretty often, but still not weekly or even bi-weekly) and it didn't usually make a huge difference, one way or another (unless dust was really starting to accumulate!). In our little house, I find that I only need one cleaning day a week, to do the dusting and vacuuming, and I finish in less than an hour (not including the downstairs/kitchen area). The two main reasons for that are that the house is small enough to vacuum from one outlet (huuuge time saver) and I've also decided to keep out fewer toys and have very distinct places to keep each of the toys we have! Fewer toys are out, and what toys are out each have a shelf or a bin/basket of their own, making for much easier clean-up! I've had a few friends comment on how neat our house is, but that's the secret - it's just plain easier to keep clean because it's so small! And because it's so small, we have fewer things out at a time (I rotate toys and the "preschool space" materials once every few weeks, switching them for things in storage and that cuts back ALOT on the toy clutter).

(I've got to admit, having a small house means I just don't have to work as hard at cleaning as a lot of other moms I know do! And I'm always hearing about these mothers who sweep or vacuum every day and I'm like, "WHAT?! Every day?!" So, small house living is very conducive for being more laid back...errr...okay, more lazy....about cleaning because there is so little to clean!) It's a funny thing, but sometimes the less you have, the wealthier you feel! Having to be intentional about organizing things and purging things on a regular basis makes me aware of how much we have!  We have sooo much, and I always feel a little guilty when I realize that we can always make do with less. Having a small home makes me aware of how well we are provided for by God, and that we need less than we think we do! I still have a loooong way to go with fully embracing that, but the I definitely feel God pulling our family in a direction of simplicity and gratitude. And He's working through our small house to get us there :-)