Faith of our Fathers

The Abbot has undertaken a huge new project...making a family tree for Sister Stinky (and Little Baby). It's pretty extensive...both my side and his side of his family, including cousins and going all the way back to great-grandparents. This afternoon he was grilling me for names and birthdates of my family members, and I was trying to recall them as best I could.

There was something special about recalling all those people. My family has always been one for passing on tradition (and Tradition). When my twin sister and I were growing up, our family life was richly imbued with traditions - cultural traditions (my mother grew up in an all Polish neighborhood in Chicago, and my father was born in Germany to parents raised in Germany and Poland), family traditions, and, of course, faith Tradition.  When I think back on those people in my own family, as well as those in the Abbot's family, I am so happy to know that our children come from such a rich and beautiful background. Varied in spots of the family tree, yes. As colorful as any family tree, yes. But so rich, and so full of love.

I wasn't raised in the Abbot's family (obviously) so I have to leave the passing on of those traditions to him. (Although, his family has been in America for ages so he doesn't really have much cultural tradition to pass on...I'm trying to change that by celebrating feasts from his cultural background as well as mine!) But I hope to pass on the love and richness of my own family to Sister Stinky.

Most importantly, I want to pass on their faith. 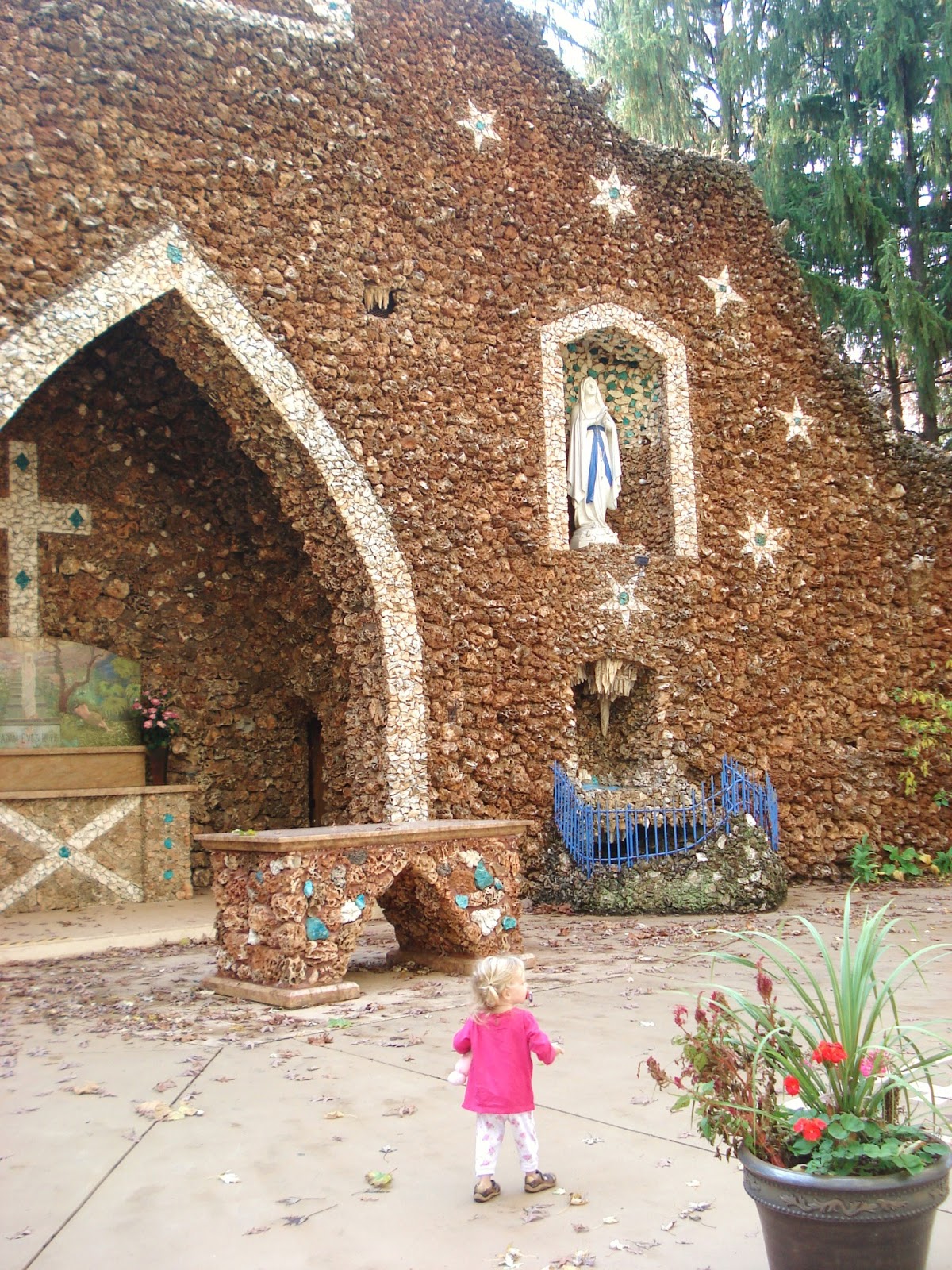 Both of my parents were raised in very Catholic families, and my own family was very Catholic...but not in a pretentious way. Catholicism wasn't forced, wasn't superficial...it just was part of the fabric and culture of who each of these families were. As an immigrant family, faith was everything to my grandparents and my dad. It was their connection to who they were (being that when they lived in Poland and Germany when these places were still very Catholic...I supposed Poland still is very Catholic, but Germany has gotten increasingly secular). Faith was as natural as everything else in their lives. When my father reached high school, he naturally considered the priesthood and entered a Polish Franciscan minor seminary. The priests he met helped him to see the Church in a fuller way, for all its beauty and richness. (Not gonna lie...glad he wasn't called to be a priest, though!!!)

My mother was raised in a very, very Polish neighborhood in Chicago. No one was first or second generation, but many were third and forth generation Americans, so the culture was still much alive. Part of that culture was their Catholicism. And, as with my father's family, it was as natural as breathing for them. My mother went to all Catholic schools (including her graduate degree courses) and was mentored by the sisters...sisters in full habit! Of course she knew a few who were less than nice (but who among us liked all our teachers growing up) but she also knew ones who shaped her and helped to make her the woman she is today.

Feastdays and cultural traditions (which typically related to feastdays) were a big part of both their childhoods. And so, they brought this into our family.

I don't know how to describe what faith was when I was growing up, but the Abbot and I want to duplicate it in our own home. My parents were in high school when Vatican II's changes went into effect, so they were very much part of a tumultuous generation in the Church. They both questioned what was happening, and were confused and overwhelmed by the changes at time, as pretty much everyone was...but they grew through it, like many did.

I mention this, because my parents somehow managed to combine very traditional aspects of the faith in to my childhood, but they did it in a natural way. I wouldn't call my family "Traddy" (as I affectionately call some of my very traditional friends) but we did occasionally go to Tridentine Mass when I was growing up. (Although, I don't think I full appreciated a Tridentine/Extraordinary form Mass until the Abbot and I went on a Campus Ministry trip to an All Soul's Day Extraordinary Form Mass in Chicago our senior year...that one floored me!!) I still definitely prefer the Ordinary form, but thanks to my parents exposing me to the Extraordinary form (as well as Polish Masses on occasion) I saw that there were different ways to celebrate the Liturgy, all in keeping with the beauty of the Church's Tradition.

We occasionally prayed the rosary and the Stations of the Cross as a family. My parents read Bible stories to us in our picture Bibles, encouraged us to watch the cartoons on the local Christian station (I later found out the Abbot grew up watching some of those, too, because...well...there are only so many things you can watch on broadcast TV in the Chicago area!), and we prayed as a family before meals and before bed. Of course we went to Mass every Sunday.

I went to a small Catholic school and my parents were very involved in both my school and parish, and that helped me see that the people involved in a parish were real people. I tagged alone to the Sacristy when my dad was a lector and a Eucharistic minister, and my sister and I were both altar servers and learned our liturgical colors that way (the cinctures were colored for different feasts...little liturgical nerd that I was even back then, I would occasionally try to match my socks or clothes to the liturgical color ahead of time). We met all kinds of different people in our parish this way, and saw that a parish family is as unique and mixed as any other...and that it takes all kinds of people to make a parish beautiful and complete!

I'm willing to bet most of the readers of this blog do many of these things (and probably more, judging from the blogs I read!) with their own families. I hope that we'll be able to do the same as our Stinker gets older.

But there was something else...something that made a big difference. For my parents and grandparents...faith was a real thing. Jesus was (is) a real person. And what they did with their lives was shaped by that.

To make sense of that, I have to go back to the Carmelite Monastery (pictured above) because it was one of the hearts of my childhood faith (and still is). When I walk those grounds, I'm immediately in touch with the faith of four (now five) generations of my family. When I look at the beautiful pine trees, I'm reminded of the stories of my great grandparents who planted them for the Polish friars. (I will forever be jealous of my great-grandparents who someone managed to find jobs as ground keepers for various religious orders once they came to America...how cool would that be?) I'm reminded of my grandparents, my father's parents, whose names are on the list of people who donated what they could to build that beautiful monastery. I walk the grounds and remember coming there so many times to pray with my parents, sister, and paternal grandparents. And I remember the stories that came out over the years, of various members of the family who visited the monastery on weekdays to pray. The stories of the saints depicted in the many different shrines (who often were, and continue to be, better friends to me than anyone here on earth!). The stories of the Polish friars who came here from so far away to practice their faith. (Many of the friars still came from Poland and spoke Polish when I was growing up.) The life of the Church is pulsing in that place! 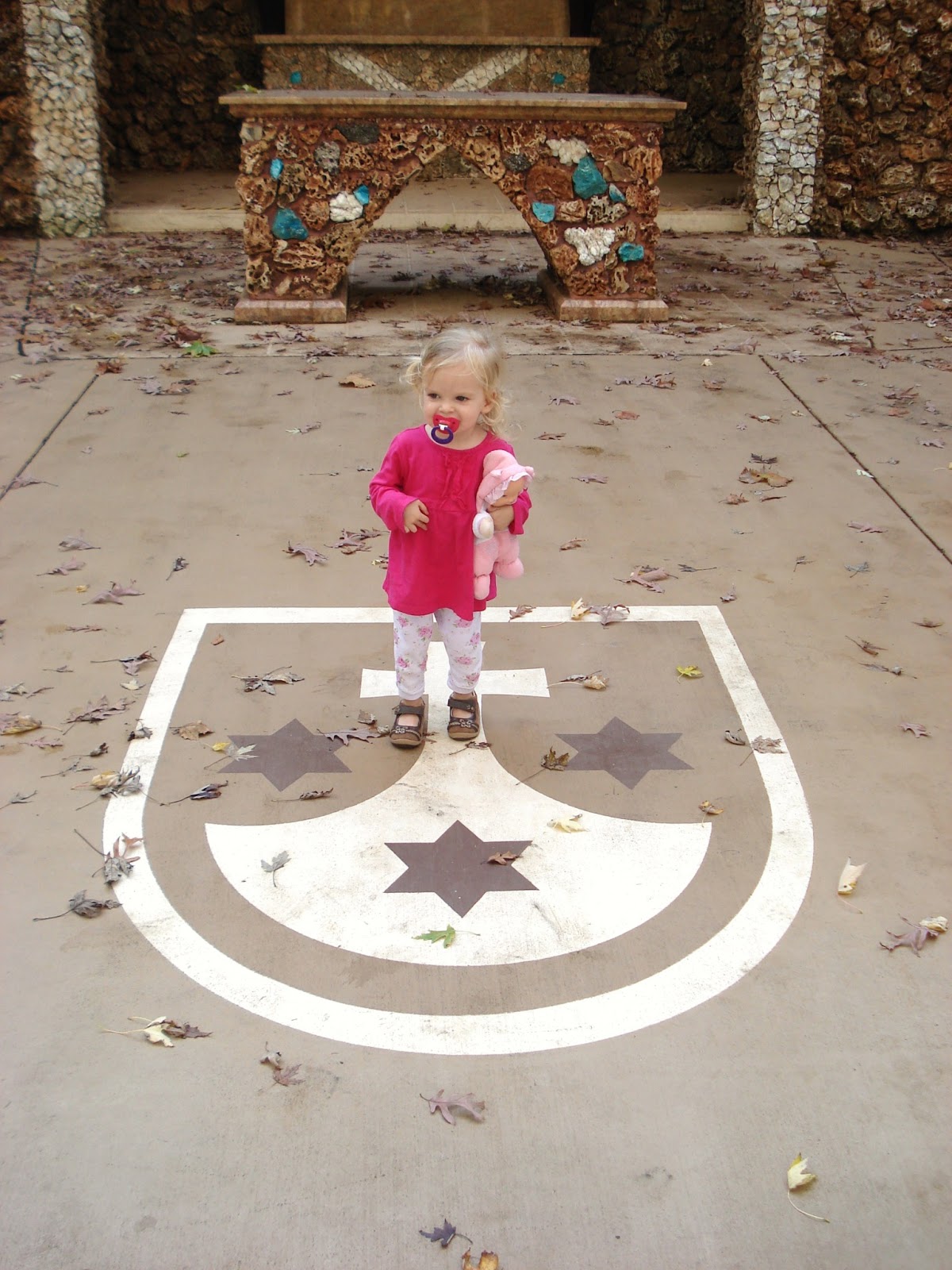 And that's the life of the Church that I saw in my own parents and grandparents. My parents, at each juncture of life, talked about praying to about where God would lead them next. As they've faced many, many difficulties in their life together, they've talked about how they trust God to provide. They talk about this in the midst of feeling frustrated when they can't yet see how he is providing, too! (It's so important, I think, for children to see that it's okay to trust God and yet struggle with trusting Him at the same time.) And I've witnessed firsthand where that trust has led them. I've been shaped especially by the quiet ways my mother and father practice their faith...the ways that they live it out without words. My own faith was shaped by the rosary always beside one of their bedsides, a parent who carried the Liturgy of the Hours everywhere and gets just as excited as I do about feastdays, and by the holy cards and prayer books tucked into the quiet spaces of their home. They didn't do these things for show, and neither of them would consider themselves very holy...they just know that they need these things to survive, the same way they need milk and bread in the fridge, and the heat turned on for half the year (they do live in Michigan, after all!).

That's the kind of faith I want to pass on to our children. A faith as natural as breathing. A faith that is humble  and quiet, but vocal when need be.

I don't share this because anyone in my family was or is a remarkably holy person. (As much as I hope those who have passed away are now saints in heaven!) On the contrary they all struggled and continue to struggle in all the ways I'm sure your families are struggling (and in some ways all their own). They were and are a very real family. But...they know that they need God desperately! And that makes all the difference.

I hope, in time, that Sister Stinky and Little Baby will come to treasure our faith. I hope they grow to see God as their Father, and the saints as their very best friends. I hope they know that they are never alone in this earthly pilgrimage, and that God's loves them and is ready to show His gentle mercy at each step.

I hope it will be as natural to them as the breath they breathe. 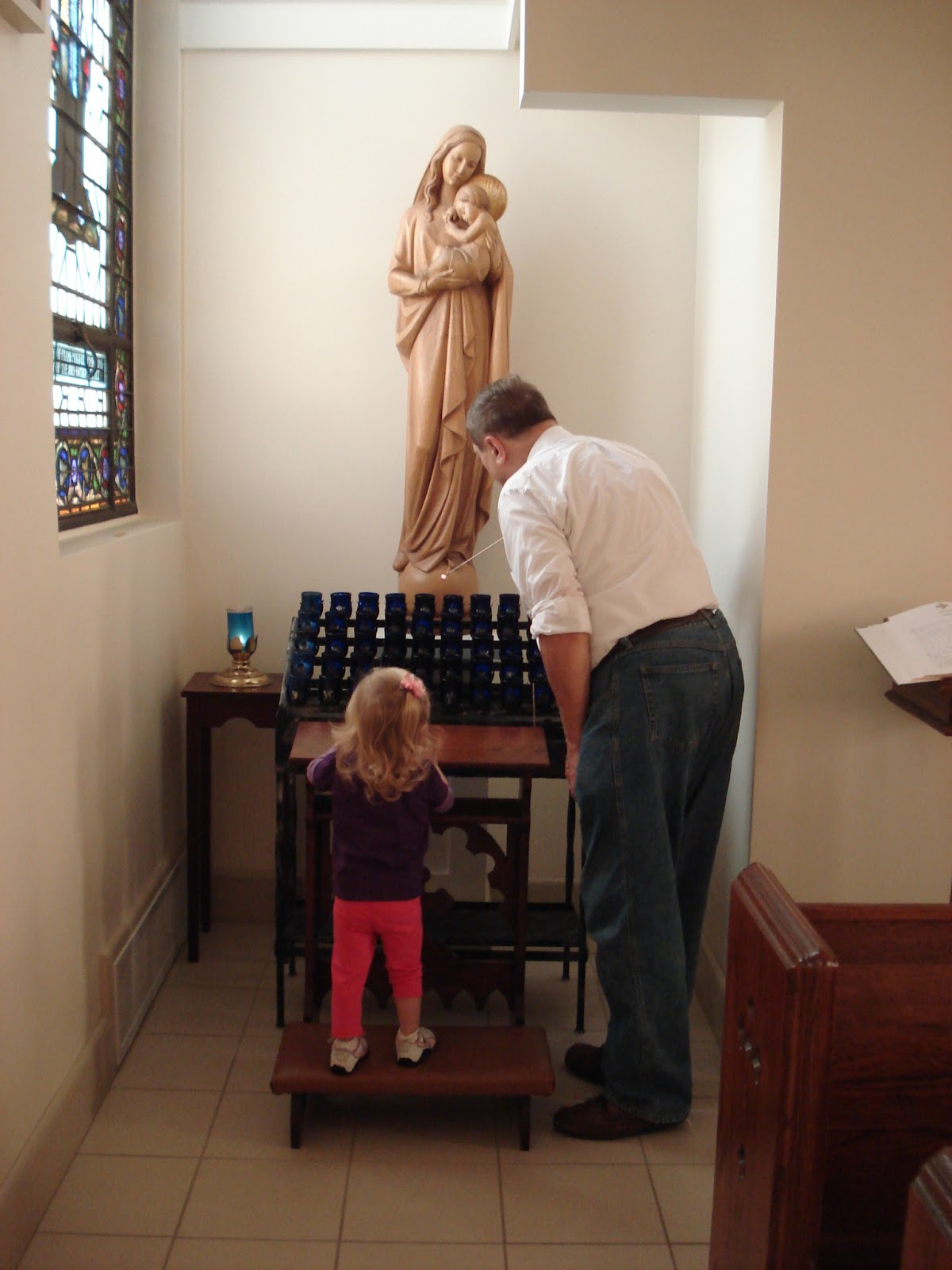 (Not the Monastery...but one of my favorite churches to pray in! So glad my children get to pray there, too.)