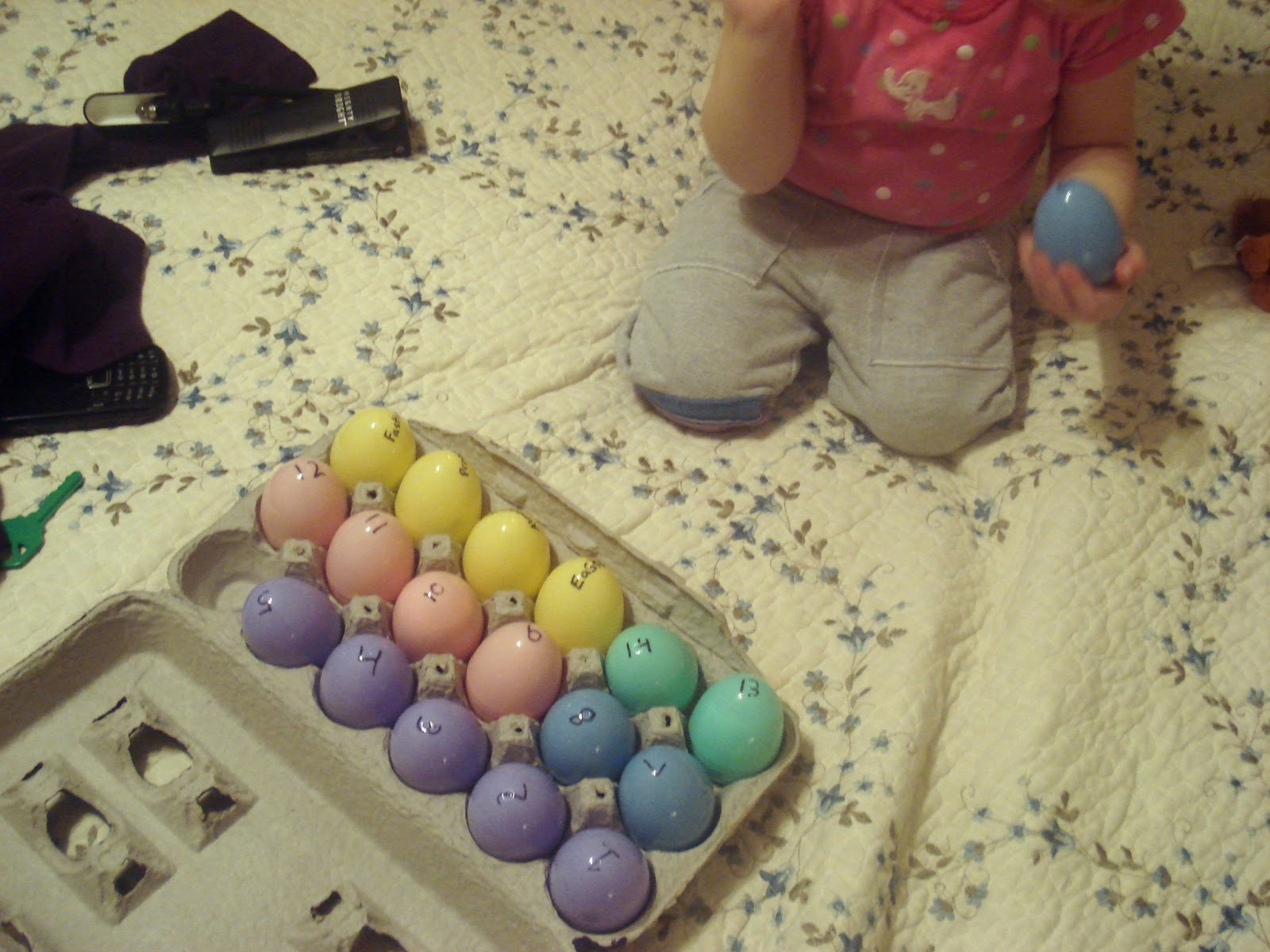 Completed Stations of the Cross eggs! These really deserve their own post because I did have to fill them with a few different things than those used on Catholic Icing (because I was making them for my two year old daughter and almost two year old goddaughter). 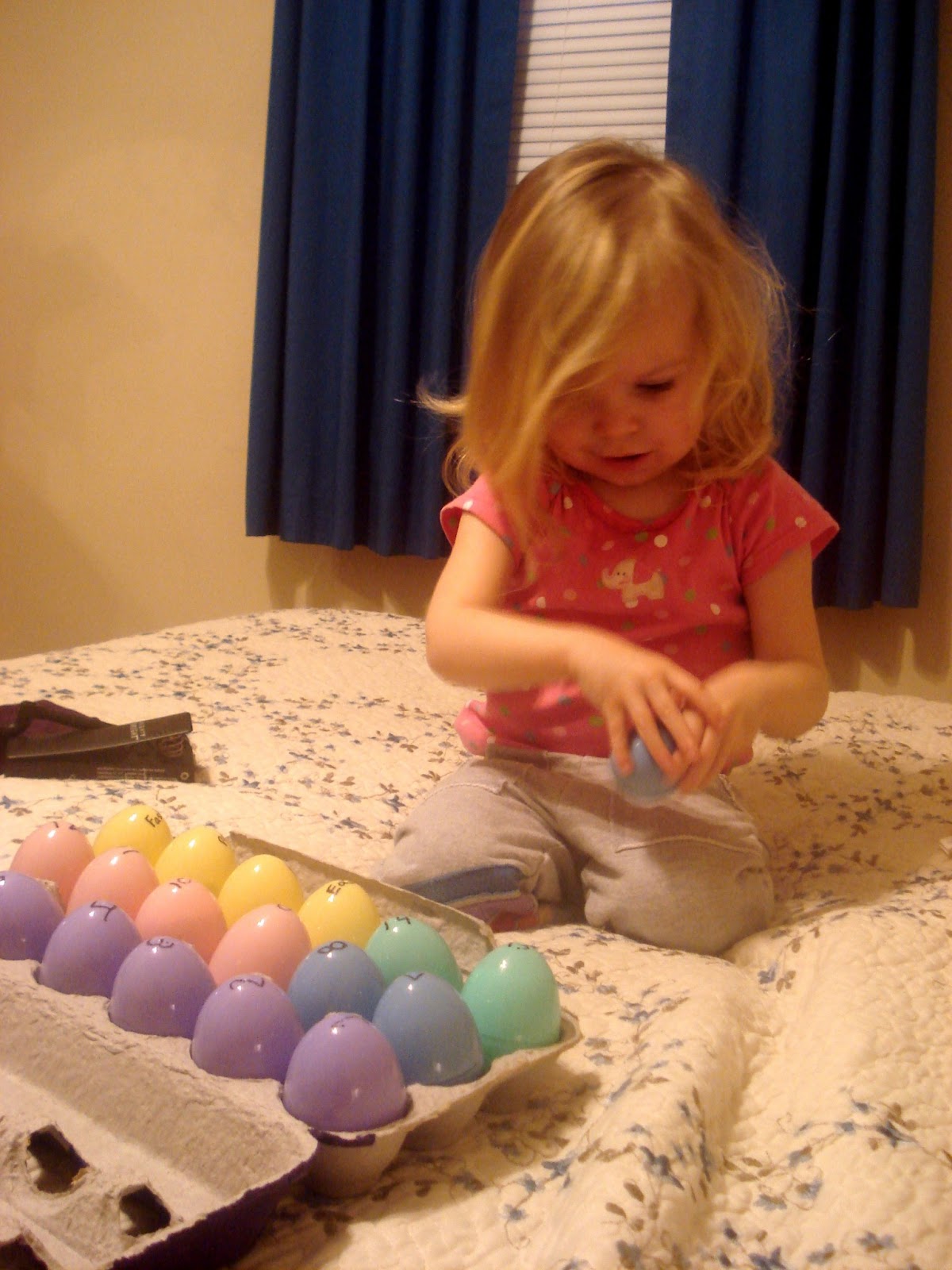 She LOVES them! Since she's still so little I wasn't expecting her to comprehend the symbolism too much, but she totally does and this is actually helping her learn about the Stations! Win! (Our goddaughter, who is even younger than Sister Stinky, loved her set, too...so double win!) 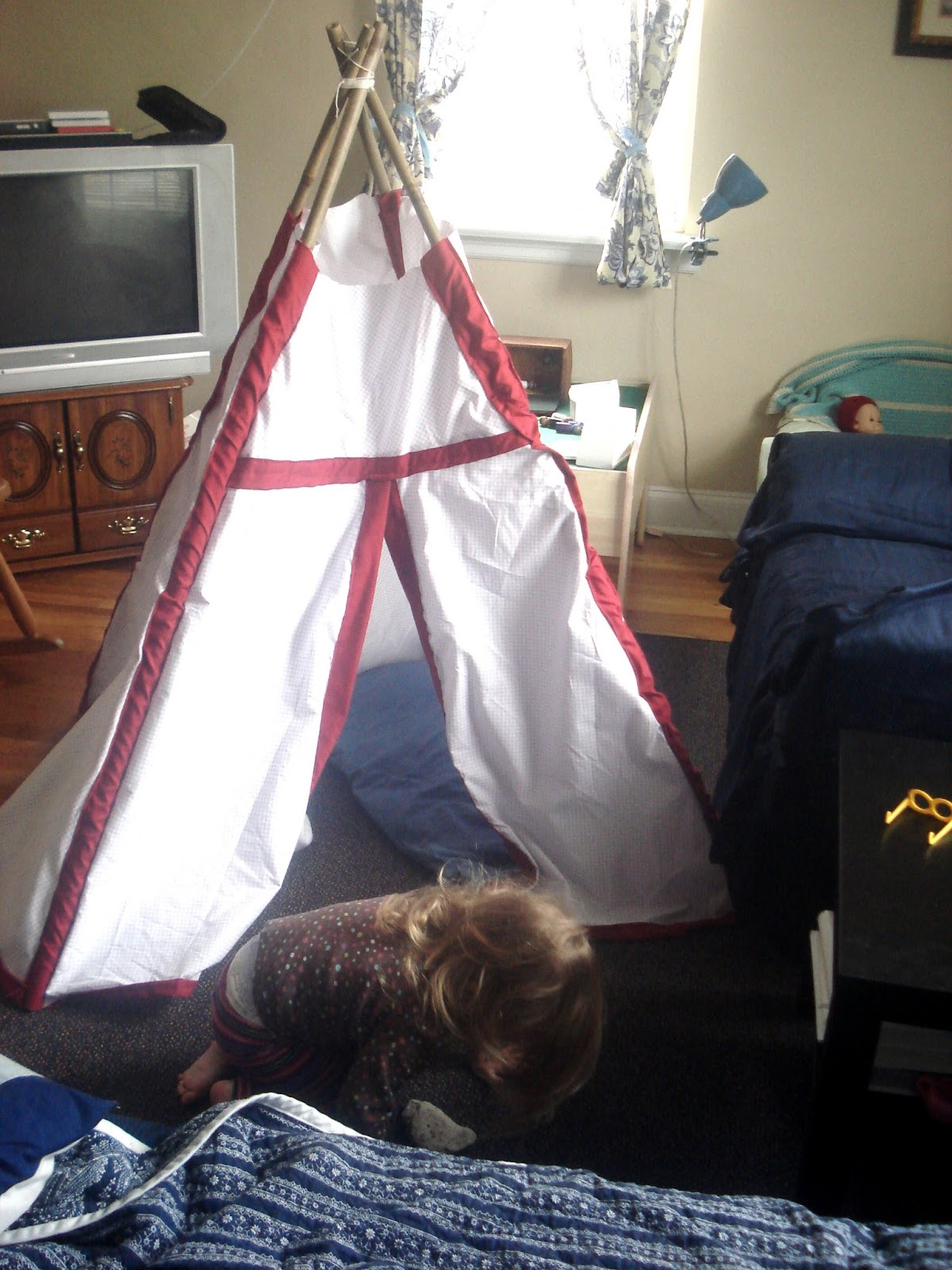 You probably can't tell what she's doing here...but she's blowing on a rock. Why? To be like Elmo, of course. Elmo is well honored in this house...we even pray for him almost every night ;-) 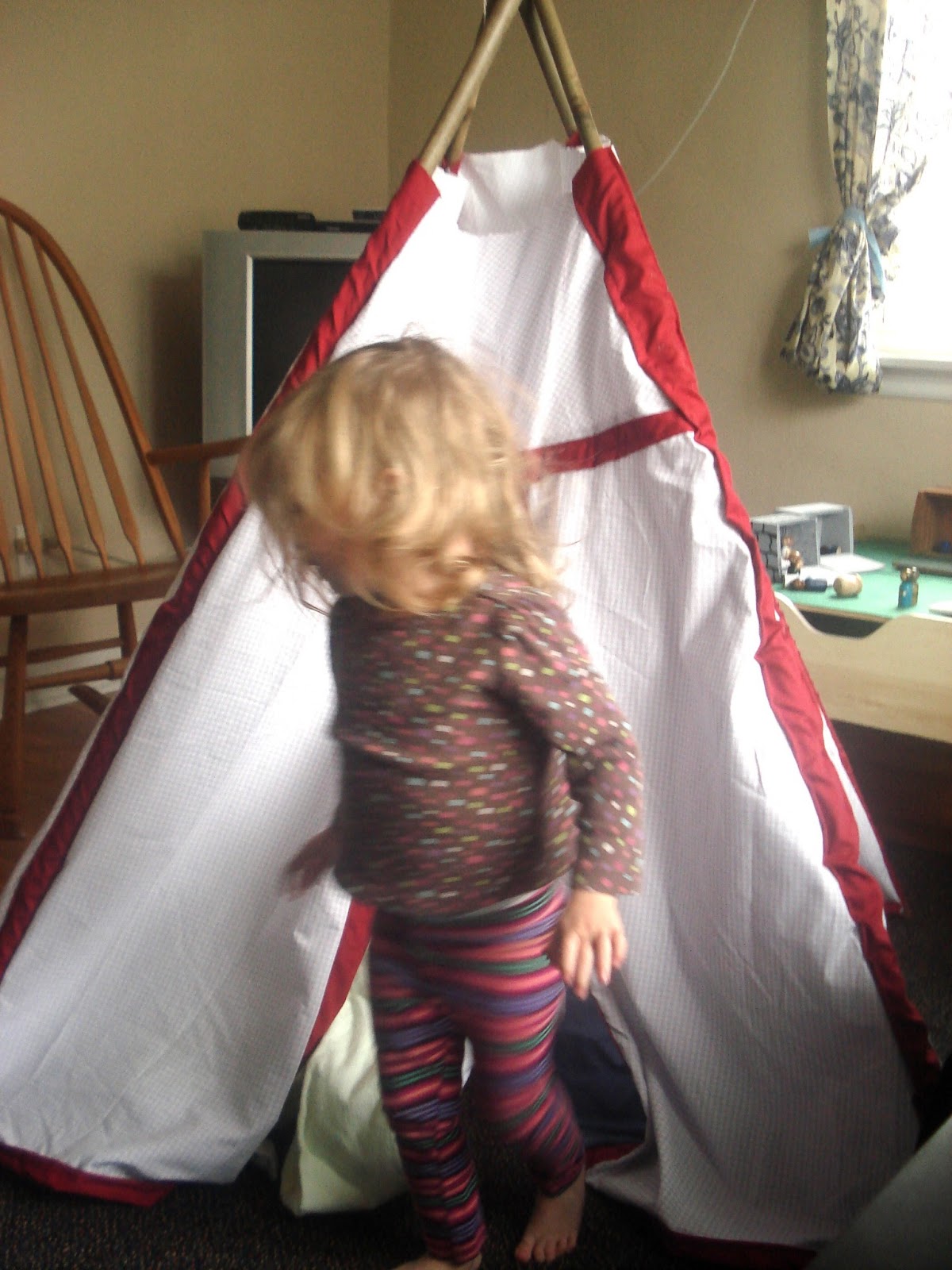 This picture really, really doesn't do it justice...but this tee pee is just too big for the little rooms in our house! When it's warmer out, we'll have to take it out to the backyard for a photo shoot. She loves it, though! I was pleasantly surprised by how large it was. She and I can comfortably lay down (with me and the Little Baby a bit curled up) inside together. She probably could fit most of her little tot friends in there with her if she wanted to! I foresee a lot of play value coming from this tee pee!

I made it using all free or second hand fabric (the main body is an old sheet set they were giving away at a garage sale last spring, and the red casing is a heavy canvas that I bought at a secondhand sale last summer, I think), and "bamboo" styled poles from the dollar store. The cost of the whole thing was probably under $5! I've wanted to make this for a long time, but was nervous about working with such a large pattern. I ended up (loosely) following the pattern from the Growing Up Sew Liberated book (which I highly recommend!!). 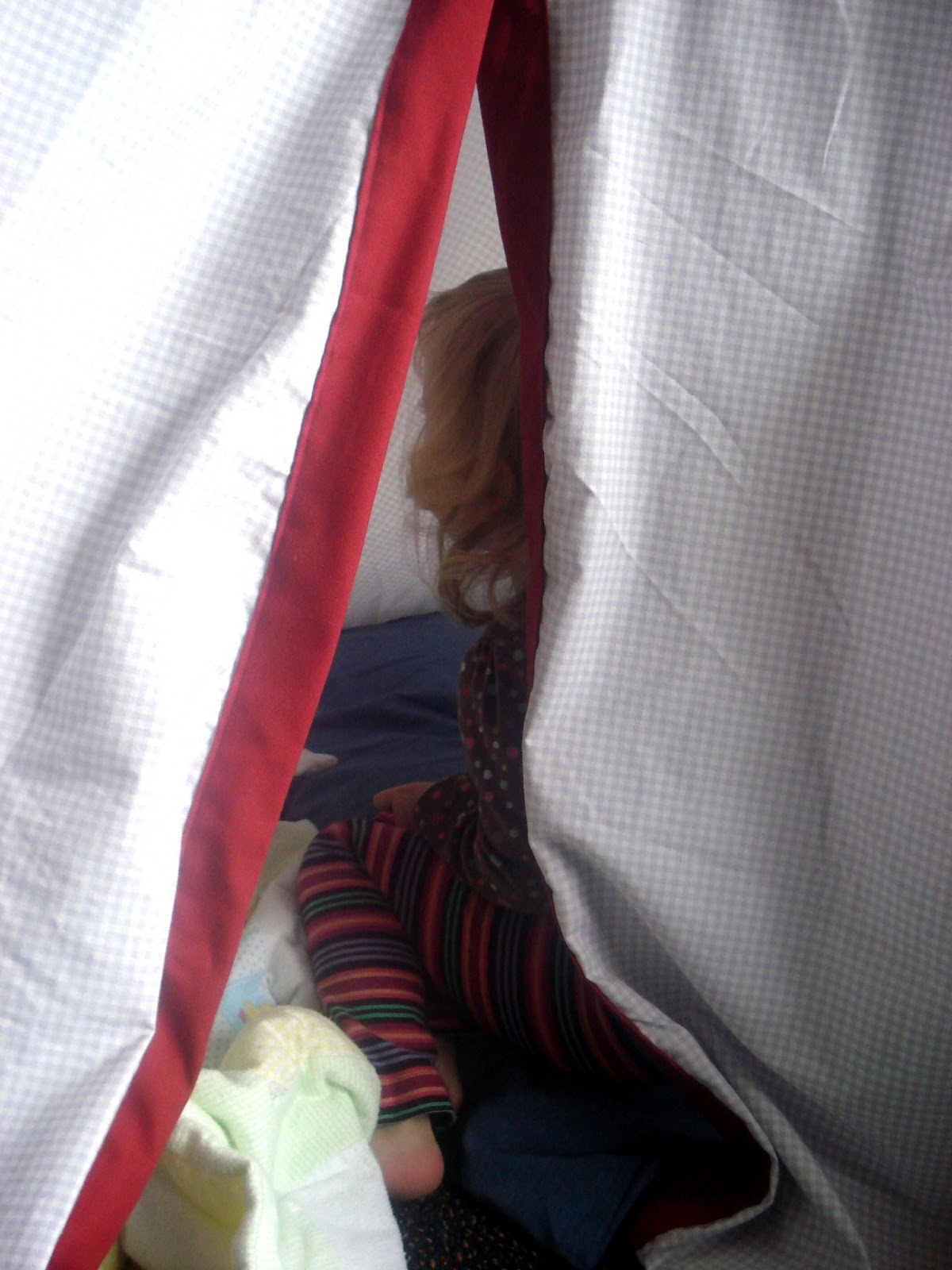 Also real? Sister Stinky's outfit. We weren't leaving the house so I just let her win that battle. She was pretty proud of her outfit, and oblivious to it's lack of matching pieces ;-)