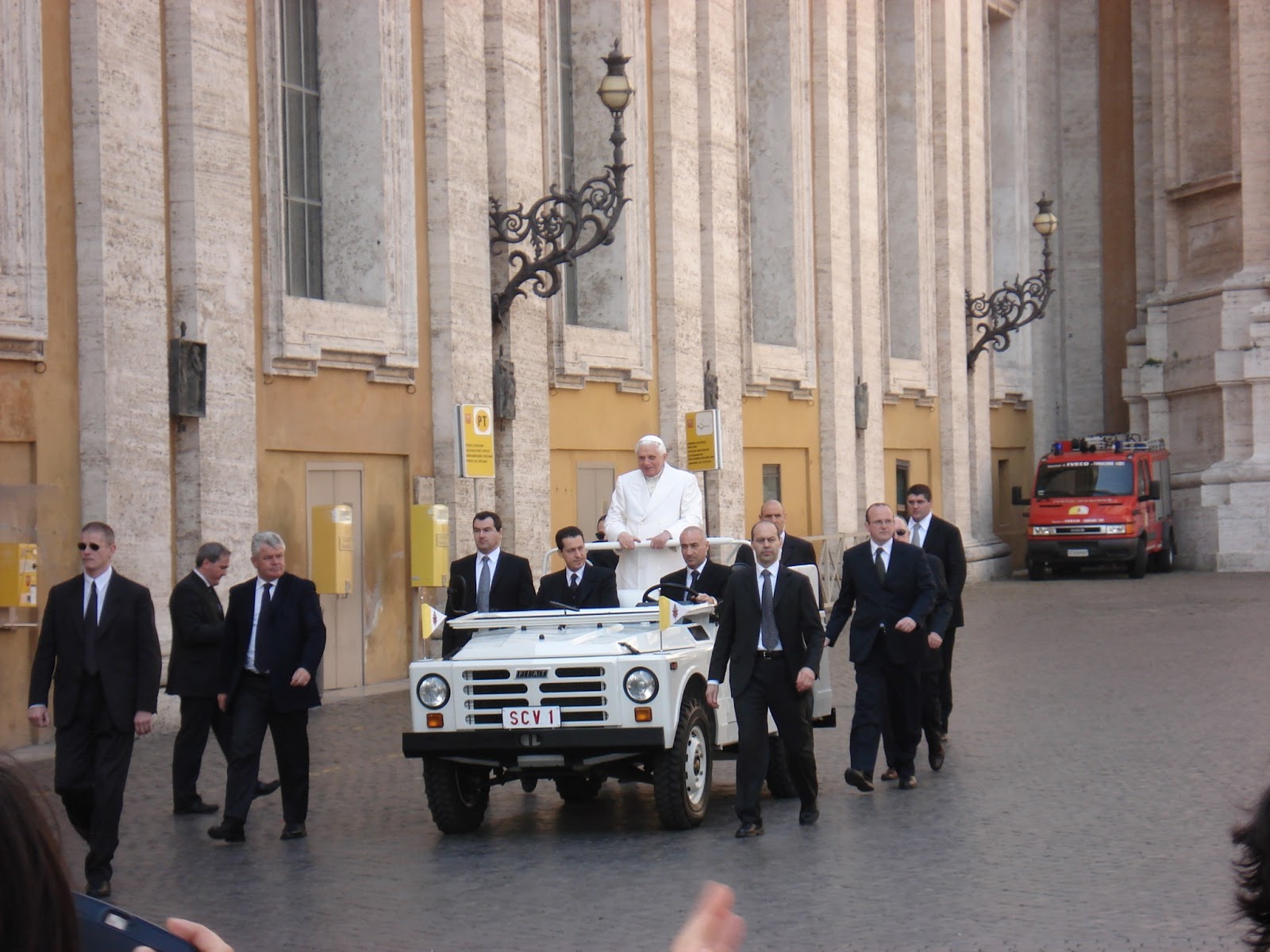 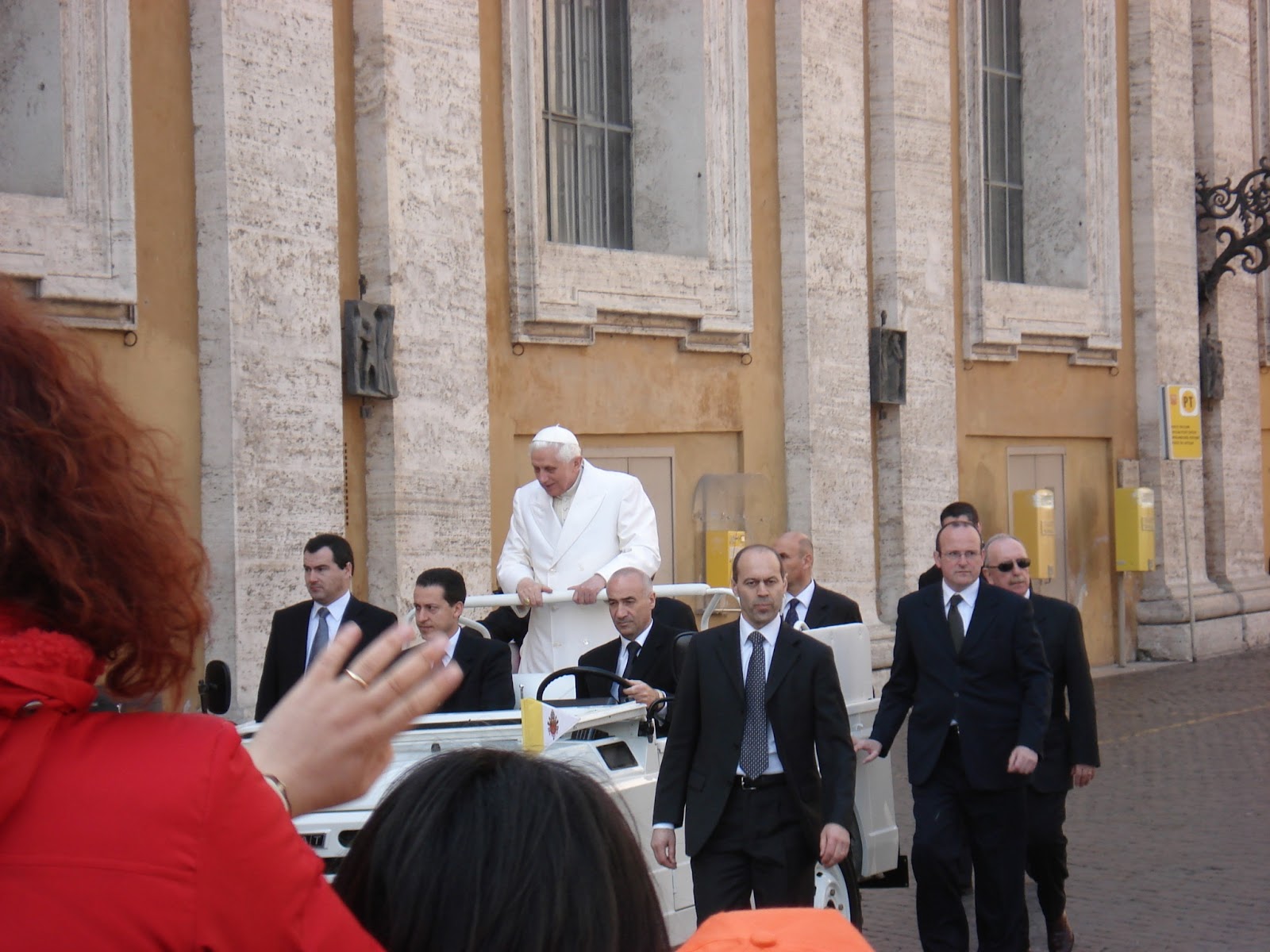 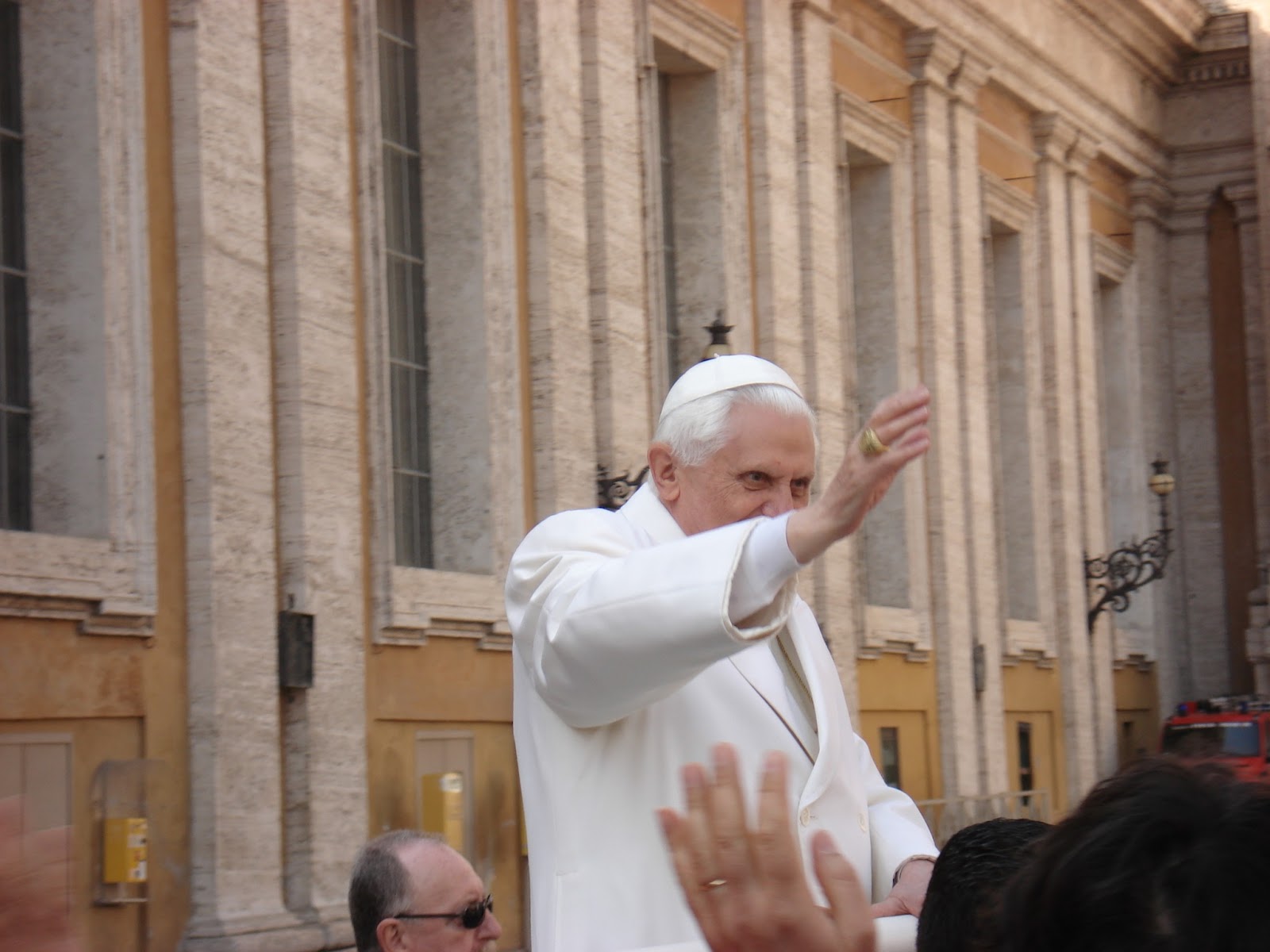 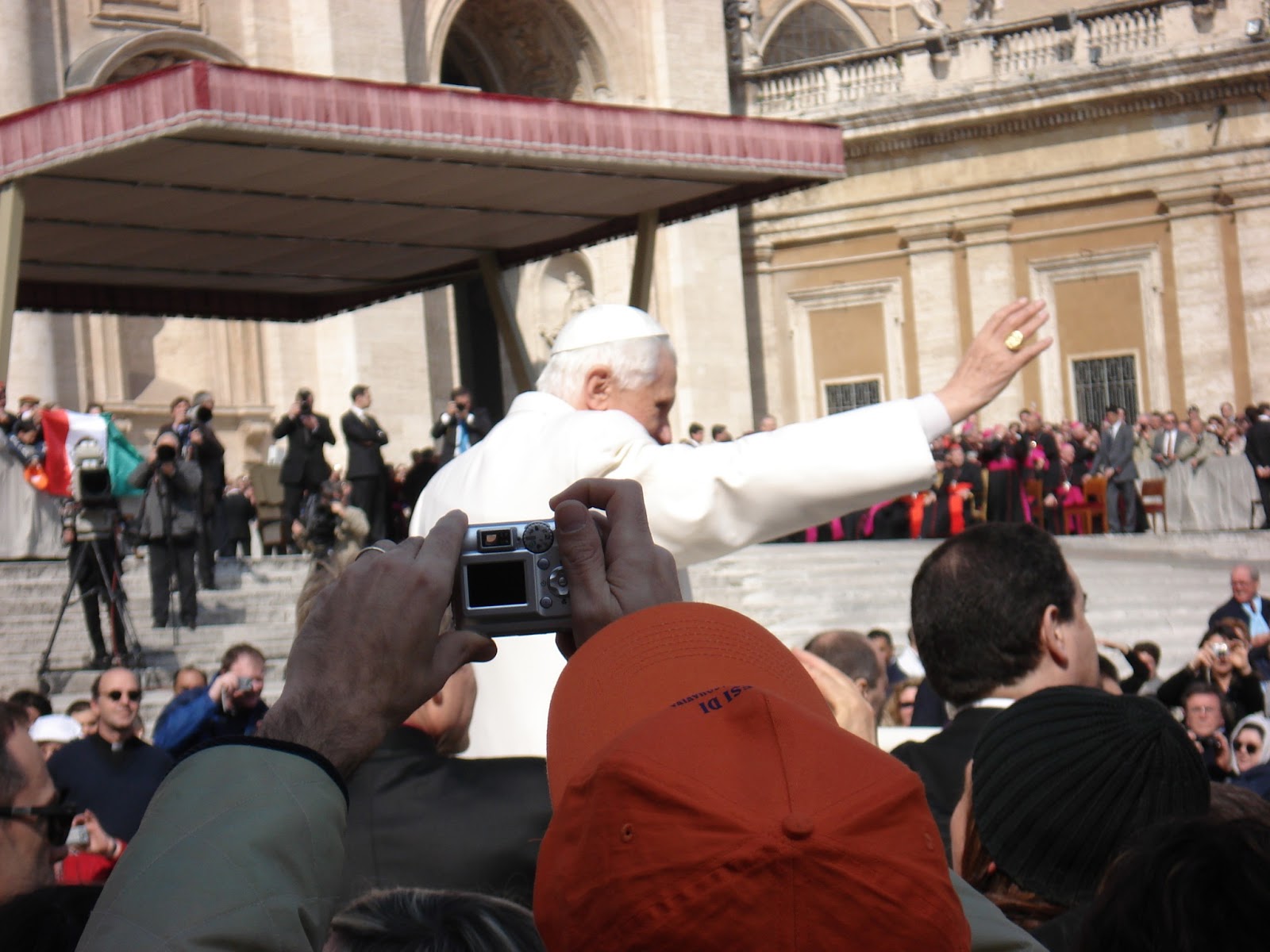 (The Abbot took these pictures the spring before we started dating, while on a vocations trip with one of our favorite religious orders. I'm glad he ended up discerning marriage but I'm sooo jealous he was this close to the Pope!!!)

I hadn't even opened my eyes yet this morning when the Abbot came into our room to tell me the news. (He's the kind soul who releases Sister Stinky from her room so I don't have to get out of bed first thing, hopefully prolonging the return of nausea for the day.)

Both of us were in total shock, and deeply saddened. My initial feelings were akin to that of being broken up with - a feeling that I had been rejected by one who I still very much loved.

I remember when Pope Benedict was elected. I was on the campus of Notre Dame, doing an overnight stay as a prospective student. I was popping into La Fortune Student Center in between classes I was observing, and the TV lounge was crowded with students. The news was clearly displayed on the screen - Joseph Ratzinger was elected Pope! I knew nothing about him, and initially was disappointed that someone younger wasn't chosen.

But the more I heard about him, the less disappointed I was. He was German (and to this day his accent reminds me of my grandmother's, who grew up in Germany). My grandpa loved Bl. John Paul II because of his Polishness, and no doubt if my grandmother had lived to see Pope Benedict she would have loved him for his Germanness. :-)

What really began getting me excited though, was my dad's perspective on it. He told me how wise a theologian Ratzinger was, and how much he thought the Church could benefit from his gifts at this crucial time.

Now, looking back over Pope Benedict's papacy, I must agree. Not only have I grown to love him for his gentleness, humility, and incredible theological gifts, but I also am in awe of what he has accomplished in such a short period of time. I am amazed by what he accomplished with the Anglicans. I am touched by his tireless concern for bringing the SSPX back into the fold, when many others would simply write them off as "too traditional." As I was googling articles today, I noticed one of them eluded to Pope Benedict's dedication to "unity." I would say that that well summarizes who he is. He has a heart for welcoming people into the fold and back into the fold of the Church, even people who some would not appreciate having in the Church. He has proven himself a true "fisher of men" and I am grateful to have witnessed his papacy.

As the day has worn on, my initial feelings have changed. I'm still saddened, but I also find myself with a new respect for the Pope. Scott Hahn shared some hints that we all should have noticed but didn't pointing to the possible upcoming resignation. The hints? The Pope's visits to holy sites related to St. Celestine V - the last Pope to resign, hundreds of years ago. This knowledge filled me with deep respect for the Pope - clearly this is something he has been praying about and asking for the intercession of the saints about. I trust that the Holy Spirit is at work here, just as He has been throughout all of this papacy.

Please join me in praying for Pope Benedict, and in thanking God for the gift that his papacy has been to the Church!