Sooo...we live in a house that's less than 900 sq. ft. It's definitely smaller than our old house was, but it's such a beautiful little house that I actually have no complaints ;-) It can be a challenge, though, when you talk about homeschooling...on a tight budget....and Montessori-style, no less! I've been trying to figure out a way to make ourselves a homeschool classroom that would be both beautiful to work in, yet inexpensive to make. 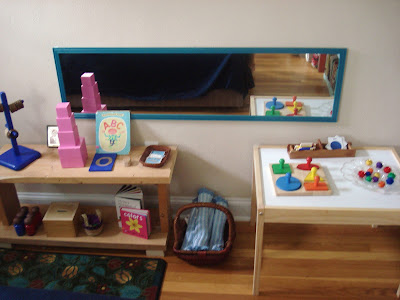 Here's an overview of the space. It's not very large, as you can see, but it's just the right size for one toddler to do her Tot School work.  It also incorporates lots of open shelving and open displays, which are in keeping with a Montessori-inspired environment (and also are more appealing to Sister Stinky).

The mirror was bought for about $5 from Target, and I think it really makes the space something special! 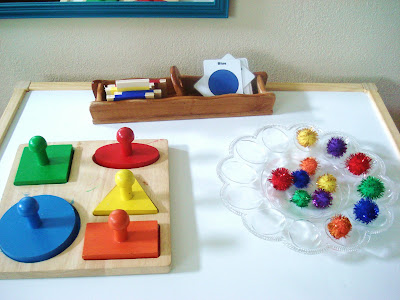 I bought this little table from Ikea last Christmas for Sister Stinky, using some of her Christmas money. It's been one of the best purchases I've made for her so far! We've used it all throughout the house (and even in the backyard). In a Montessori classroom, there needs to be both space to work at child-sized tables, as well as place to work on the floor. This enables Sister Stinky to have a permanent table space in her Tot School classroom. The contents are fairly simple. Clockwise: a thrifted old cracker holder that contains her first set of Montessori color tablets (matching sets of primary colors) which I handmade for less than a dollar and some laminated cards with pictures of different shapes (the circle is on the front because it's the first one she learned, and the shapes are blue because that's the only color she knows right now); next, a simple thrifted egg tray with sparkly poms, used to enforce transferring skills as well as to provide one-to-one correspondence practice; finally, a beautiful shapes puzzle, also bought secondhand. 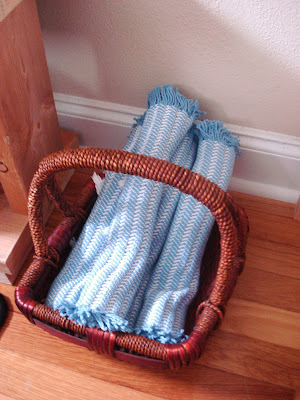 I finally took the leap and decided to introduce mat work to Sister Stinky. She's starting to get the hand of unrolling her mat, bringing what she wants to work on to her mat, restoring her work when she's done (i.e. putting it back in its place) and rolling up the mat at the end. Of course, she's so little that she still needs prompts for each step of that, and she needs help with the rolling and unrolling. She's pretty good at putting things on the shelf, though, and can also carry her materials pretty well (including carrying the mat back to the basket using both hands). I'm excited for her to get this skill because it's not only necessary for her Montessori work but also necessary for atrium work once we get into Catechesis of the Good Shepherd work together. These beautiful mats were woven by her great-grandma (who is still alive and kicking!) and were recently handed down to us. 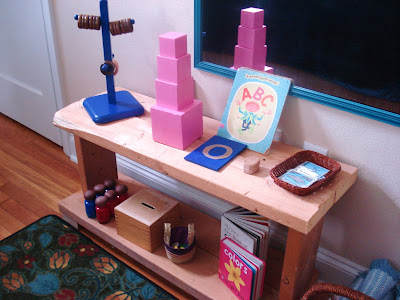 Here's her shelf area (normally, we unroll the mat in front of this shelf and do our work there). This shelf is my first attempt at shelf-making, and it's made entirely of salvaged wood found off the curb! (Totally free...even the nails were Freecyled to us.) The Abbot was skeptical while the shelf was being made but even he likes the final result! Open shelving like this can be pretty expensive and that simply isn't in the budget right now. I'm glad we found an affordable alternative! 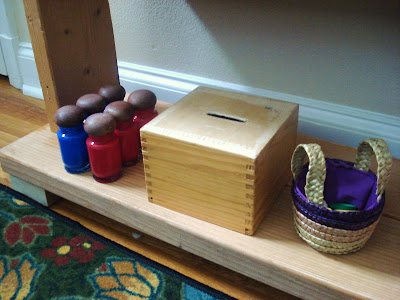 On her bottom shelf you'll find handmade sound cylinders using thrifted bottles and filled with a matching set of rice cylinders, bean cylinders, and oatmeal cylinders. Beside them is DIY coin box for Sister Stinky, which she absolutely loves! The coins are in the basket beside the box. Both the box and the basket (and the plastic coins, as well!) were thrifted. I simply drilled and sawed a hole in the top of the box (inspired by this post as well as another site that I can't find at the moment!). Next to the coin box (not pictured) are two board books. 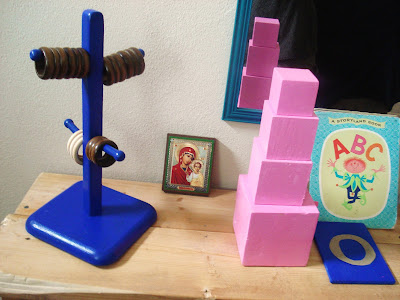 On the top shelf is a thrifted cup holder that was painted blue, and used with some thrifted (and new) wooden rings/napkin rings. To see one source of inspiration for this (as well as to get a sense of what Montessori material it would replace) see here. Beside that is an icon, a little reminder that we give all our work, in love, to God. Next to that is my handmade pink tower (which was a collaborative effort with the Abbot, and really deserves a post all it's own!). I've made all the blocks for it except the three smallest, but I wanted to start her off simply with a "toddler version" of the pink tower (i.e. few blocks). She's doing well with it so far! Sister Stinky has also developed a recent fascination with the letter "O," hence the sandpaper letter and alphabet book. Not pictured are her laminated weather flashcards, which sit beside the sandpaper letters, in a small basket. We look through them to talk about the weather each day. 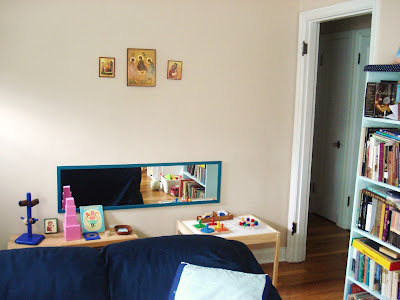 This shot gives you a sense of where our "classroom" is. That's right...it's just the back wall of the living room which was being unused after the re-arrange earlier this summer. It's the perfect spot and already Sister Stinky and I both love it!