Not typically one of my strong points.

Mothering a toddler is helping me to grow in this area. 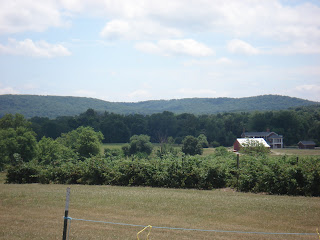 The summer before the Abbot and I got engaged, he took me blueberry picking for the first time, about a half an hour from my family's home in Michigan. Blueberries are ripe late July/early August up north, but where we live now...they're ripe for the picking!!!

We found this beautiful blueberry farm in the Ozarks a couple weekends back, and picked to our heart's content. :-) 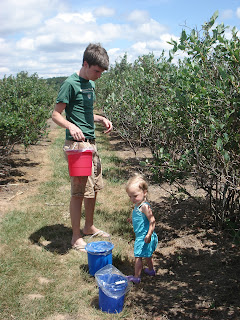 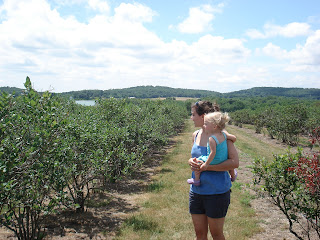 I am a goal-oriented person. I've come to discover this because I am surrounded by friends and a spouse who are all process oriented (i.e. want to take their time doing a job with care, instead of rushing through to reach completion). When I see a patch of blueberries, my first thought is, "How much can I pick and how fast can I fill my bucket?" 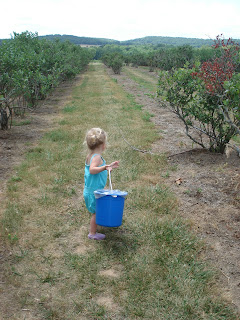 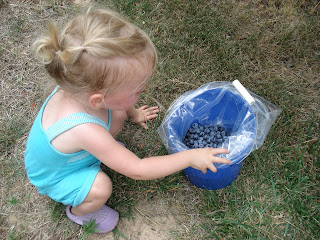 On that fateful August afternoon, many moons ago, I stormed on to that very first blueberry picking experience with the Abbot, eager to pick as many berries as quick as possible and move on.

I had barely covered the bottom of my bucket and I was done with the experience. I had picked some blueberries, it was hot, and I was ready to move on to the next thing.

The Abbot made me slow down, helped me find some more good bushes, and taught me to have the patience to pick enough to fill (alright, at least half fill) my bucket.

Enter the girl who is both his daughter and mine, years later, at a different blueberry patch.

Like her mother, she saw the blueberries and was instantly filled with exuberance to pick all of them (including the green ones...you can imagine what her diapers were like for days after). Unlike her mother, and more like her father, she did this slowly, with great care, while sampling many blueberries.

Having little Sister Stinky along slowed down the process considerably (especially because of her habit of doing her sampling out of our buckets of berries), but it also made it infinitely richer. 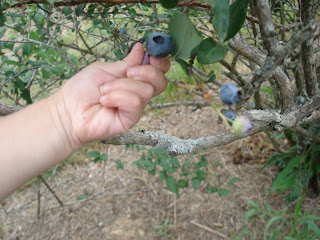 (Look at that tiny little hand and that great pincer grasp practice!)

My thought was, as always, to plow through the picking and just to hope that Sister Stinky amused herself while I picked as many berries as I possibly could. The Abbot had a different method.

I heard him talking to Sister Stinky, a few bushes over. "Do you want to help me pick blueberries? See, this is how you do it...no...don't eat the green ones. That's a good one. (A few seconds of contented silence as the little girl eats a ripe berry.) Do you want to pick another one. No...that one's yucky. That one's green. No...no! Don't eat the green ones...that's a good one."

You get the idea.

She did wander over to Mommy for a while, but most of her time was spent with the Abbot.

Thanks to his patient instruction...she actually was picking the right colored berries by the end of our outing, and even putting them in our buckets!

He viewed this outing as an opportunity to include Sister Stinky, and to teach her something new.

You would have thought that that mentality would have borne little fruit (no pun intended), but here's what it resulted in: 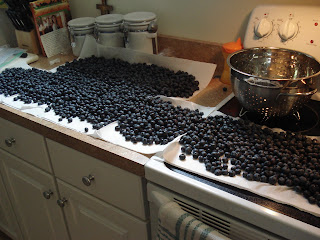 Ten POUNDS of blueberries! And most of them picked by the Abbot. Slow and steady wins the day!

Linking up to Like Mother, Like Daughter. Hop on over there for more pictures of contentment!
Email Post
Labels: {PHFR} berry picking children family Sunday toddler