There's been a lot of buzz going on since President Obama's big announcement last week. Of course, our family has been saddened by it because it is, yet again, just one more stance he has taken that goes directly against Church teaching. I'm not going to go into the details of why gay marriage is wrong. I'm not going to go into the details of the definition of marriage. I'm guessing that readers of this blog probably know Church teaching well enough that they know the answers to both of those questions (and probably have been called on to supply those answers on more than one occasion in the past few days). I want to talk about an aspect of this debate that I find troubling, that few people are discussing - love. 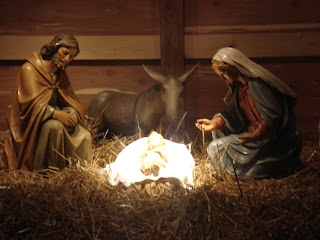 One of the main arguments of those in favor of gay marriage is that everyone "in love" deserves to get married, and how dare opponents try to deprive anyone of love! This, I find, is the most difficult aspect of the argument to counter, because it relies on a definition of love very different from our definition of love. The secular mindset (and even some non-secularists who have been heavily influenced by popular culture) sees love as a warm, tender feeling that two people have for each other - sometimes even as a burning, passionate feeling between two people. Either way, love is something that feels good. We pursue it because it fills up our aching hearts with warmth.

But Love, real Love, is something so much more than that. It is a God willing to become incarnate and suffer and die for our sake.

A few nights ago I kicked back with some fellow mamas and we had a nice long discussion about this very thing. We talked about how it's hard to describe what is wrong with the "in love" argument when we have a very different definition of love than the secular world does. The underlying problem seems to be - how to explain that the "love" of marriage is meant to be a sharing in the love of the cross? That, with all its joys, marriage is ultimately meant to be a vocation in which we take up our crosses and follow Christ? Every married couple I know, including the Abbot and I, have experienced moments in which this reality becomes all too real. The drastic moments, of course, drive the point home all too well. But, I find that the small, mundane, everyday moments drive the point home even more effectively.

Marriage often starts with that passionate, physical and emotional attraction that we call love. But, over time (and if you're lucky, even before the wedding date) you begin to realize that there's more to loving your spouse than just that. Marriage as a vocation is ultimately about seeking the good of the other, not your own good. Again, this is something hard to explain to the secular world. They will argue, "But, that's what we think, too...marriage is about a man and a woman, or two men or two women, wanting what's best for their 'spouse' - wanting them to be happy and healthy, etc." Except, again, our definitions are different. I do want the Abbot to be happy in a temporal sense - I want him to enjoy life and to have all his basic needs met, and have ample time to play Angry Birds on his Kindle. (Okay, I only want the latter if I'm not trying to look something up on Pinterest when he wants to play Angry Birds on his Kindle. Just keeping it real.) But what I ultimately want for the Abbot is for him to get to heaven. I want to do everything I can to help him get there. And I want to get there, too. So marriage, for us is more than the fact that we are physically attracted to each other and enjoy watching copious amounts of Smallville together. Ultimately, for us, our love is defined by our deep desire for the other one to grow in holiness and for us to reach heaven together. 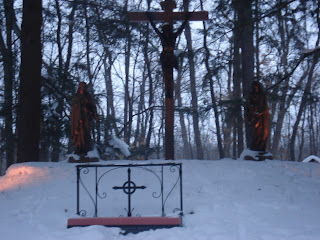 Of course, this definition of love is not just one we came up with on our own. It is modeled after the love that died on a tree.

I was reminded of this by the readings this Sunday. Especially poignant is the second half of the second reading. St. John is describing love:

In this way the love of God was revealed to us:God sent his only Son into the worldso that we might have life through him.In this is love:not that we have loved God, but that he loved usand sent his Son as expiation for our sins.

Whoa. Totally different definition of love than what is being used in the debate currently reigning in the public forum. No one is trying to deny anyone this kind of love. But, married love (along with all other forms of human love) is meant to emulate the love described here. It is meant to be oriented toward life (both the reception of new life in the marital act, as well as the spiritual life of the spouses). It is meant to be open to the love of God, and to always bear in mind that that Love was oriented toward our salvation. All other forms of love in marriage must be oriented toward that, even if it means sacrifice (such as a couple having to abstain from conjugal relations for a period of time in order to prevent pregnancy in a grave situation). This also means that a couple is ultimately desiring the other's holiness. I desperately want for the Abbot to get to heaven, and he wants the same for me, and we are committed to doing what we can to help the other get there. Yes, we are still very much "in love" but this other form of love is what drives us and makes us truly bonded.

Of course, we can argue against gay marriage because it is impossible for procreation naturally to occur (a necessary part of the marital bond - of course, this does not exclude couples who suffer from infertility or who are past child bearing years because their bodies are still oriented toward this possibility) but in terms of the other purpose of marriage - the good of the spouses - the Church shows wisdom in her teaching, too. The good of the spouses is about more than companionship, more than sharing of each other's lives. It is, ultimately, about wanting that great Good of your spouse - wanting them to get to heaven and being willing to lay down your life for them to get there, just as Christ did. Typically, this plays out in less dramatic ways than a death on the cross, but ultimately that is the love we're called to emulate.  It is a love that can be painful.

Yet, it is a love that brings far greater joy than any other. It is a love that can be experienced by married and unmarried alike. It is a love that is found within the context of whatever vocation God has called one to. If that is the love that we seek, and if that is what we define love as, then it quickly becomes clear that we certainly don't want to deprive anyone of a sharing in that love! Yet, how to explain that to someone who thinks that marriage is necessary to happiness and can't fathom a life of celibacy?

Herein lies the great conundrum...how do we express the truth we know with a world that can't understand it?

Even as I'm writing this, I can picture people arguing, "Oh, but same-sex couples want to sacrifice for each other too!  They want what's best for the other! How dare you say otherwise!"

Rather than focus on those arguments, though, let's take a step back from this debate to reflect more on this new definition of love. Take it to prayer.

I'll admit, trying to explain something like this can be overwhelming, because I know that someone can easily come up with arguments against what I'm saying. I know that I probably won't convince anyone otherwise. That helpless realization can make you feel incapable of entering into the discussion at all.

Yet, all we can do is speak the truth lovingly and pray that God opens hearts and gives us the words we need to help others understand. And of course we can do our best to live out this love. The rest is in His hands. By God's grace alone, there go I....