Now we enter into the Triduum...the highest, holiest days of the whole year.

I LIVE for these days! I believe with all of my heart that they are a glimpse into what heaven is like. The whole world feels more focused as millions of people the world over celebrate Christ Passion, Death, and Resurrection.

Sister Stinky will be preparing for the Mass of the Lord's Supper by working with these: 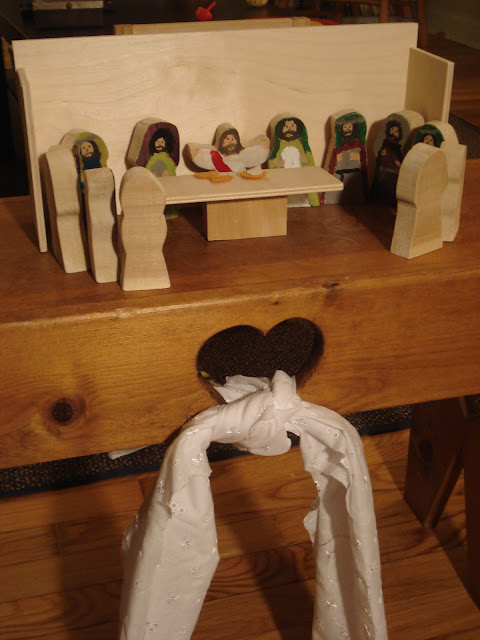 This is sort of a "beginner's" cenacle ("upper room") from the Catechesis of the Good Shepherd. It is by no means a complete set (which would include figures to transition to a depiction of the Mass) but I think that's something we'll tackle next year. For this year, we will focus on the image of the Last Supper itself. 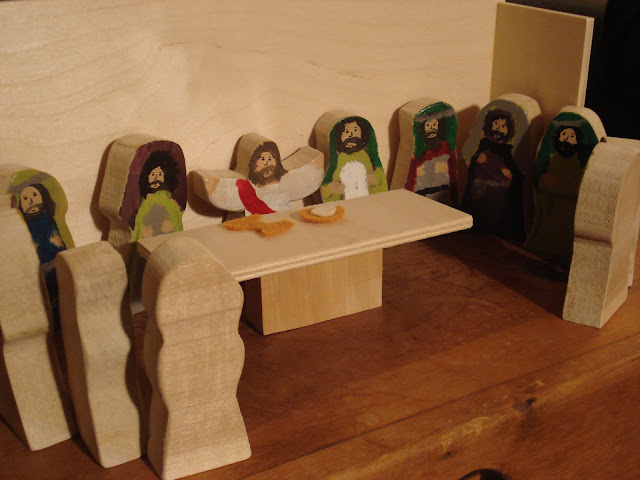 At the Mass of the Lord's Supper tonight, the liturgy is two-fold. We remember both the washing of the feet, (during which the "mandatum" or mandate to do the same was given), as well as the gift of that first Eucharist. Since the Abbot and I wash Sister Stinky's feet almost every day, we won't focus on that part this year. (Although in future years I hope to be able to focus on that with her, especially as a way to open up a discussion on the servitude of the priesthood and the importance of supporting these men with our prayers...as I've mentioned, we are blessed with one of those pastors that wouldn't flinch in the least to wash the feet of his flock!) Instead we will focus on the gift of the Eucharist. 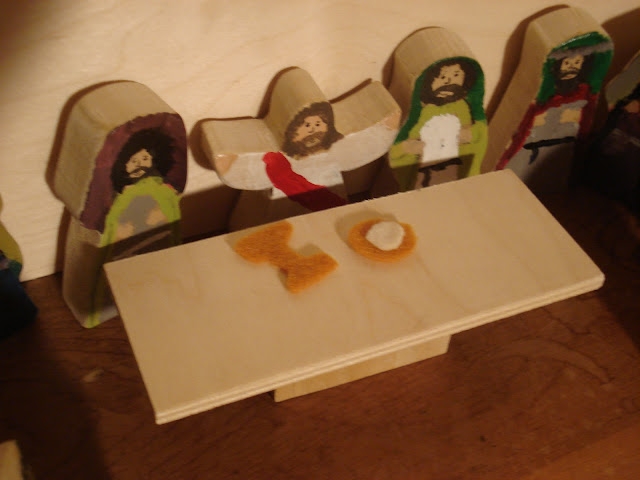 I'm a firm believer that the gift of the Eucharist is one that can be appreciated from the start...and I mean from the start! I made a point of praying with Sister Stinky in the presence of Jesus in the Eucharist when she was still in utero. I would pray with her then, as now, telling her about the closeness of Jesus who loves us so much.

I once heard someone speak about the gift of the Eucharist, saying, "When we reach the end of our lives, we will realize that the greatest gift we were ever given on Earth was the Eucharist!" I can honestly say that is true! I don't know what I would have done throughout my life had it not been for Jesus' presence in the Eucharist. His nearness has sustained me in times of sorrow, made my joy fuller, and set my heart ablaze with love.

Since before she was born, the Abbot and I have made a point of making sure that at least one of us takes Sister Stinky up close to the tabernacle and prays with her, telling her about our dear Jesus who loves her so much that He is always there, waiting for her. We also pray with her in the time after we receive Communion, holding her close and asking God to give her the grace of spiritual communion. (I'm always amazed that she actually holds still for those few seconds!)

The other day, our persistence was rewarded. In a moment of grace - the kind that makes all the trials of parenthood worthwhile - the Abbot and I saw Sister Stinky pull down her Sacraments board book when we were playing with her in her room. She opened it up to look through it and we began talking to one another. Then we saw her pointing and heard her saying, "Jee! Jee!" (Which is her word for Jesus.)

She was pointing at a picture of the Eucharist. 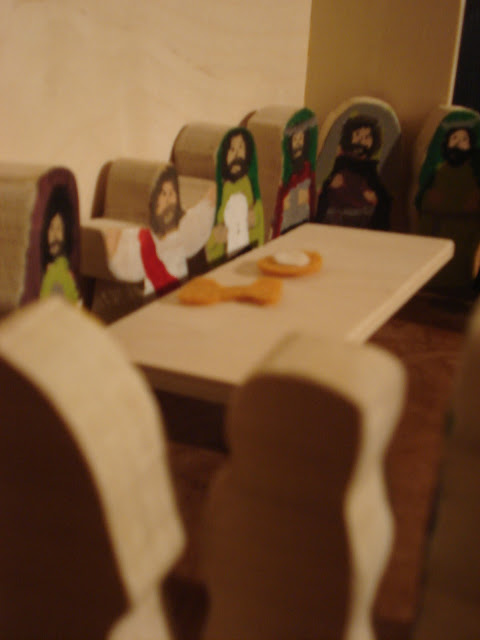 Come to Him in the Eucharist....and bring your little ones, too! He is always waiting for you, with love and patience.