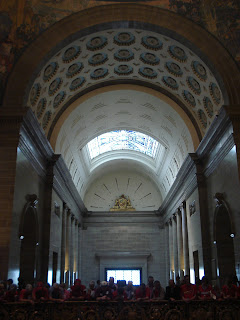 Sister Stinky and I took a road trip this week...to our state capitol (which is beautiful, by the way)! This wasn't just any trip, though. We joined friends (my sweet goddaughter and her parents), many strangers, and even our archbishop (our bish is one cool guy!) in rallying against the HHS mandate. We are so blessed with the archbishop we have! He doesn't hesitate to lay the smackdown! 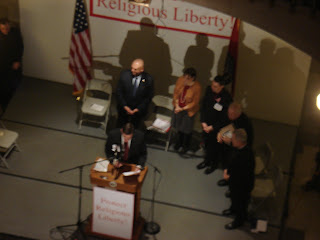 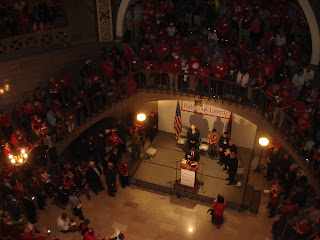 Our archbishop is the one on the far right. (Sorry for the blurry pictures but we were up on the third floor of the rotunda...) The acoustics weren't all that great, but I was happy to listen to his speech later. Check it out!

My personal favorite? When he draws a parallel between what's going on now and what happened in the time of the early Christians. Best line? "Mr. Obama, we stand as followers of Jesus Christ!" or maybe..."My brothers and sisters will you stand with me and say, 'Jesus I will take up my cross and follow you wherever it takes us?!" How awesome is that??? He also does a beautiful job of clearing up the misnomer that this is about the Church's imposing her opposition to contraception on everyone, but rather that is is about the federal government forcing the Church to act against her own teaching and so violating our religious freedom. 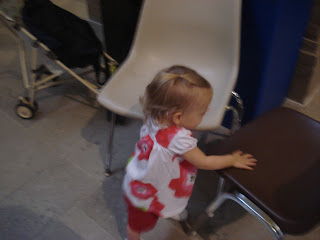 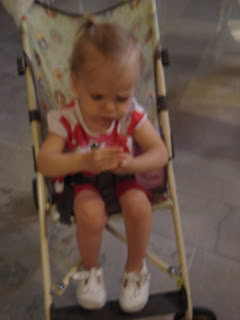 Sister Stinky did an excellent job at her first political rally. I was so proud of her for taking a stand for her faith in her own small way. She kept those around us laughing with her enthusiastic applause! 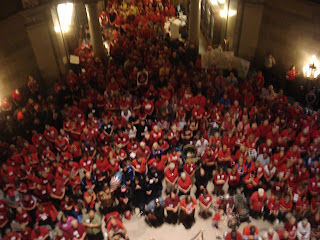 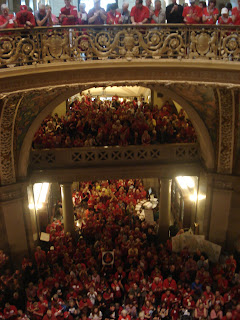 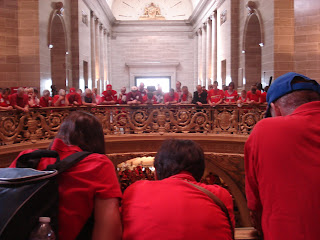 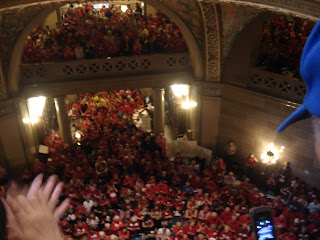 Just look at ALL THOSE PEOPLE! There were thousands of people present. THOUSANDS! And this was during the day in the middle of the work week, mind you.

The media outlets have, not surprisingly, covered these rallies rather poorly. You won't see pictures of the hundreds and thousands of people who were present at the rallies held across the country during this past week. But they were there!

Seeing all these men and women (and children!) standing up for their faith...it gives me real hope for the future of the Church. It's scary to be living in a time when the Catholic Church in America is being threatened in such a blatant way (I'm still appalled and deeply saddened by this attack on the Church which was published as an ad in the New York Times). And yet...attending a rally like this, and seeing that the Church is still very much alive and well...it gives me hope. So much hope.

Come to think of it, certain toddlers applauding enthusiastically for religious freedom give me hope, too. ;-)

Please be sure to join the bishops tomorrow in a special day of prayer and fasting for religious freedom! Also, be sure to check back next week as we celebrate my favorite week of the year...Holy Week!

UPDATE: A friend just sent this to me. Apparently, the rally worked! Praise God!