I used to be very uncomfortable with silence. I felt the need to fill up the time with conversation, or music, or anything rather than that dreaded silence.

Then, I went on a silent retreat. It was actually kind of nice, all that lovely silence.

Then I married The Abbot of our dear little domestic monastery. 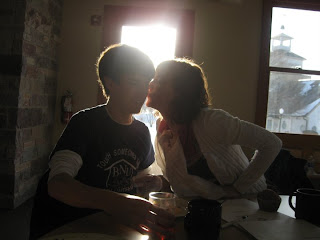 God certainly has a funny sense of humor.
The Abbot is the silence to my noise. He has taught me that there is something profound to be found in those moments of silence. After all, it is in silence that we can hear that tiny, whispering sound. 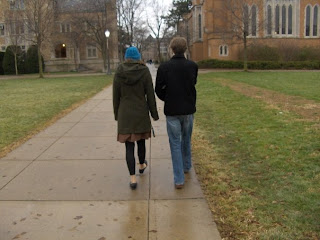 Some people think that when a baby enters the picture the silence ceases. In some ways, truer words were never spoken. Life with a child carries with it a greater exuberance. Children are never wanting for energy. Despite that, silence has a way of remaining, albeit taking on a richer quality. Every parent knows the bliss of the great silence after bedtime in the home of a young child. Each parent also knows the peace that comes from silently snuggling a little one (especially if that little one is nursing or contently sucking on a bottle!).
But there are other kinds of silences, too. There is the silence when a baby or toddler sees or hears something for the first time and is totally captivated by it. I was reminded of the beauty of that silence earlier today.
There is a very real concern in child expert circles these days that children are growing up without adequate experience in nature. In a world of texting, typing, and TV, there is too much noise and busyness and not enough of the quiet that can be found outdoors.
Thankfully, I'm married to the Abbot. Just as we are polar opposites in the silence realm, we are also polar opposites in the nature realm. Before marrying the Abbot the last thing I would have ever wanted to do was go hiking around state parks and nature preserves. But the Abbot LOVES being outdoors and thoroughly enjoys hiking. He especially loves our current home where the state parks are free and we live minutes from the foothills of a small mountain range.
So, this morning - after an early Mass and breakfast - we found ourselves hiking at a state park. 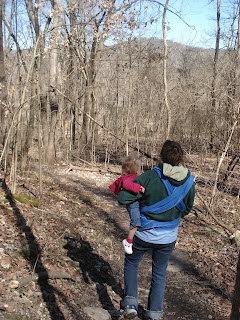 Sister Stinky and the Abbot both share a love of everything nature. (They are slowly converting me.) I am inspired by the Montessorian thought that I read, to "follow the child" and take time to slow down on our walks with Sister Stinky, and observe the things she finds intriguing. The Abbot is inspired by his love of nature to slow down and "teach" his daughter about the various things we encounter on our walks. Different inspiration, same results.
Today, many different things caught her eye - the dogs on the path, the leaves on the hillside, but especially the river and the creek winding around the park. (She desperately tried to learn how to say "creek" but she kept accidentally blowing raspberries instead of making the crucial "cr" sound.) At one point in the trail, we paused so she could fully take in the sight of her beloved creek. 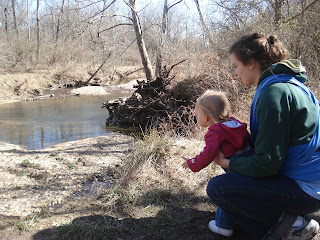 Of course, anyone with a toddler knows that once is never enough, so we found ourselves stopping for a longer look further down the trail. 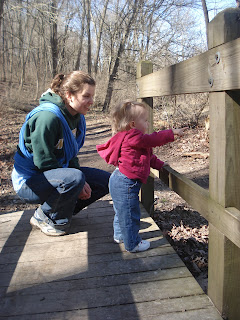 Have you ever witnessed a toddler totally engrossed in something? A normally wiggly little person is fully capable of stilling herself, and standing or sitting silently - listening and looking with total concentration.
What a beautiful reminder this is for us - especially those of us who are parents of those little toddlers! - at the beginning of Lent. It's a reminder to slow down and put our whole hearts in to listening and looking, trying our best to hear whatever it is God is trying to tell us during these 40 days.
Many blessings on this 1st Sunday of Advent!